One of my pleasures is the stroll around the garden first thing in the morning. Here's what I capture when I sling the camera around my neck... May is AUTUMN down under. Of course, you can't compare an autumn rose with the freshness of a spring rose, so if you would like to see roses in spring from my garden go to my ROSE galleries, there's plenty of rose photos there! :o)) 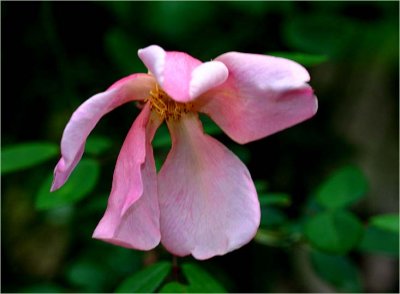 The changing colours
This rose is famous for the changing colours - it opens up saffron yellow and gradually changes to a deep strawberry pink. It doesn't seem to mind the cooler days and nights - there are quite a few blooms out right now. You need a bit of space to grow this rose, it can grow into a HUGE shrub over time. I've seen one that would be 5 metres in width and close to 4 metres in height, probably grown on own-root - but it looks fantastic in full bloom with all the different colours at the same time. Mine is grafted and is manageable! 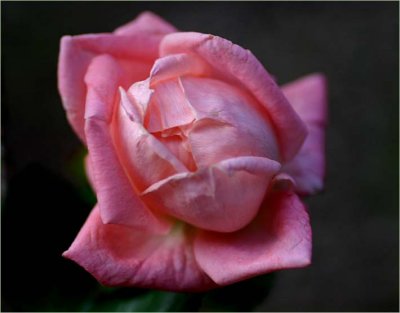 The florist's favourite!
This is Sonia, one of the most popular greenhouse roses in the whole world (according to my books). It has other names, like "Sonia Meilland" and "Sweet Promise" and its very pretty in the spring in our garden. There's a fruity fragrance and as you would expect, it lasts well in a vase! We originally added this one to the garden because of the name - our eldest daughter (we have 3) is named Sonja with a "j" and this rose is the nearest we can get. It's not her favourite rose though, she prefers "Fragrant Cloud" she likes the vibrant colour & beautiful fragrance - and she is vibrant herself in both colouring and personality. 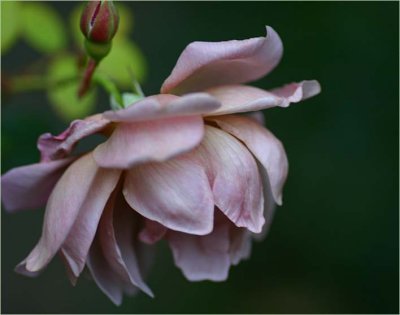 An odd coloured rose
This one opens up fawn and gradually changes to mauve-pink. They're usually in small clusters in the spring & summer, in the autumn there's the occasional cluster too. Probably an experiment trying to get the elusive "blue" rose by the breeder! Like most of the mauve roses, it has a pleasant fragrance. The bush is quite short & spreading so its well suited to the front of the bed of roses. 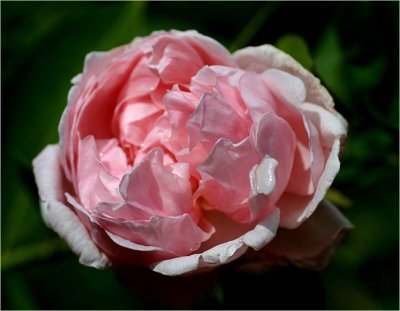 A David Austin rose
This one is Chaucer, which is noted for not producing flowers in autumn, but mine does. Its one of my favourite Austin roses, bearing tall upright canes and sometimes small clusters of pretty pink roses at the top - but not so tall I can't reach them! 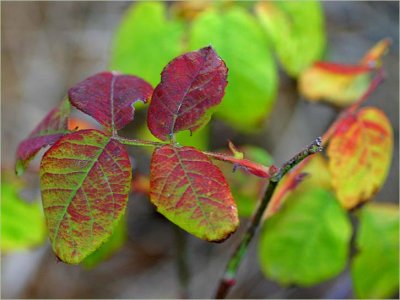 The autumn leaves of red and gold (green)
This is a lovely old rose, its the most colourful as far as the autumn leaves are this year. Its usually Belle de Crecy that outshines this particular rose, but BdC didn't come through the drought very well. We had to irrigate through the night and missed noticing it was missing out on a drink. 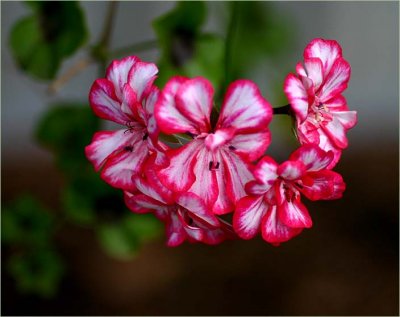 Old Stripey the pelargonium
This one is an ivy type (meaning, it has ivy shaped leaves) and will climb or creep whichever its needed for. Mine came from Dick's Mum many years ago and we have it growing in the pelargonium garden and in a few hanging pots. It gives a nice splash of colour in the garden and dripping down from the hanging baskets. It survived the spring-summer-autumn drought - just. 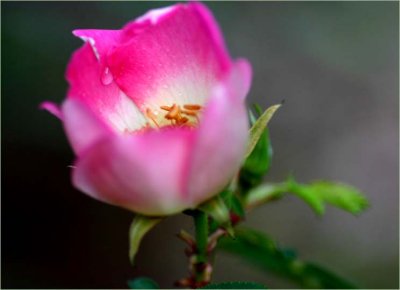 Fruhlingsmorgen in very late autumn
We have three of these shrub roses in a row, they're big arching shrubs with plenty of thorns and these beautiful single blooms edged in pink. There are plenty of maroon hips sharing the canes, but its not that difficult getting past the thorny canes on my morning walk. This morning I had to chase the canes in the strong wind to capture at least one shot worth presenting. 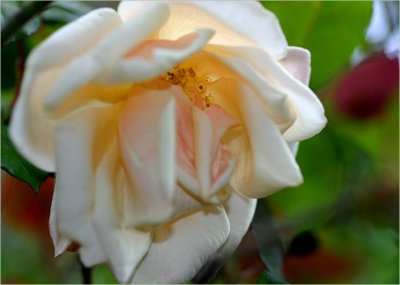 A big old blowsy rose who loves wintry days
This particular rose seems to save all its main flowering until the temperature drops, or perhaps its because when the days are warm all the other roses take my eye. This is a delightful big blowsy shrub that's now in its 17th year and got to quite a size (close to 3 x 3 metres). The fresh new growth is a pretty russet colour which looks great against the pale safron shades of the bloom. I had to pan this rose, the wind was still very strong this morning. 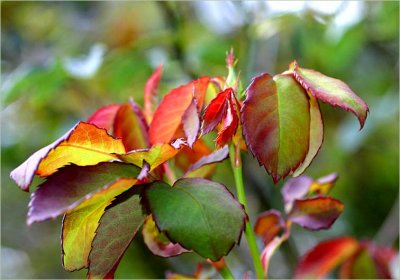 Fresh new growth on Red Coat
We've had good follow up rains since the big downpour a few weeks ago. All of the roses are making a recovery as we approach the first official day of winter!
Nepeta and Cecile Brunner 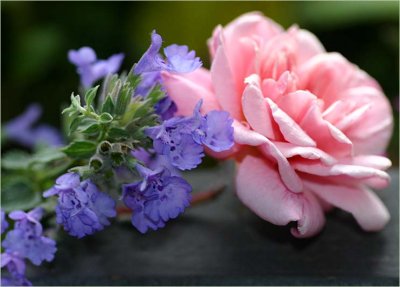 Flowering Quince - Japonica - Chaenomeles
This bush is flowering now, must be quite confused with the climate - it certainly isn't spring here - its still late autumn! 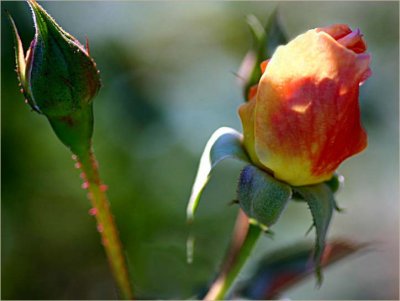 Two buds on Moonsprite
This delightful little rose was bred from the old favourite "Sutter's Gold" no wonder it is fragrant as well! The colours are much deeper right now and it is more into the colouring of its parent with the chilly mornings of late autumn. In summer Moonsprite is mostly creamy-white just slightly deeper in colour towards the centre of the bloom. If you want to see it in spring and/summer look in my many rose galleries, it'll be there somewhere! The bush grows into quite a compact twiggy shape and there's always a cluster of buds coming on if you keep dead-heading. Very pretty in a vase.
click on thumbnails for full image