Autumn and Winter in the Hills 2019

Photos taken from April - September during 2019. 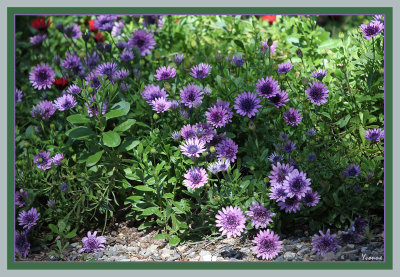 Daisies beginning their spring display
Osteospermum - a massed display beginning.. not all the colours are out yet, but plenty of this one.
This will be the last photo for this gallery.. we'll be away for a couple of weeks,
packing tomorrow and leaving the day after.
We are heading for the tropics, some sunshine and warmth!!! 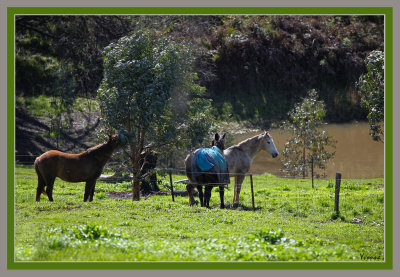 Pow wow over the fenceline
Three of the four horses often get together near the fence between the 2 paddocks..
girls are the other side of the fence and the young gelding this side..
That's his Mum, the white mare and the background is the next door's small dam looking quite muddy
because we've been having lots of rain.
This is very near the end of this particular gallery.. only one or two still to come before
we head off to the tropics for a couple of weeks. The roses have had their winter spray and we've put out the fertiliser,
when we return we can just sit back and let nature take over...except for WEEDING & MOWING.! 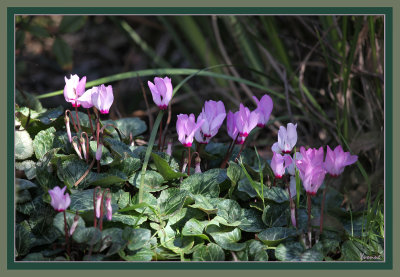 The original cluster of cyclamen
These are the cyclamen that the birds sowed seed of in the garden that gave me
the idea to make a patch of cyclamen, considering they grew so easily in this
part of the garden. I haven't tried adding the large cyclamen to the garden patch yet... 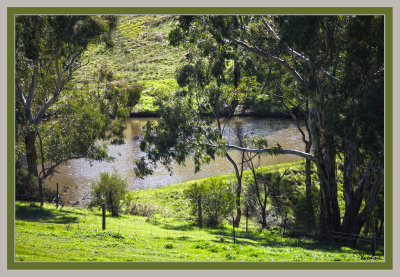 Our dam is full now.
Photo taken from our fenceline showing the dam down in the valley; it is full
at last, and there has been some water forming a river between the ring of dams.
Dick fenced off our dam many years ago and planted heaps of native trees & shrubs
and left an area where the stock could drink without damaging the entire area. 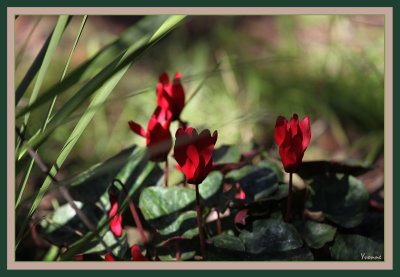 Red mini cyclamen in the garden
A patch of cyclamen I have growing in another part of the garden began from finding
self sown cyclamen growing without any help from me - most probably from birds helping
themselves to seeds in a pot of cyclamen. At this time of year they suddenly reappear
in the garden and very quickly begin flowering as you can see here. The original
patch I will feature in a day or two. 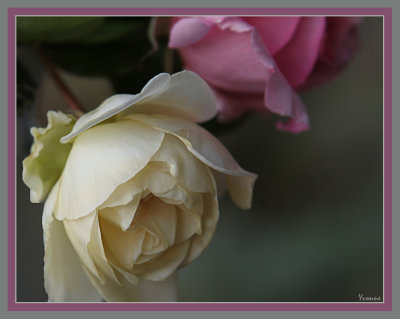 "Devoniensis"
This rose shared the vase of pink roses that I featured about a week ago, but
it missed out in that photo, so now here it is. A delightful old tea rose with
lovely bloom and it still has a few flowers even though it is still late winter here.
Dating from 1838 there is a delightful tea fragrance with a touch of lemon, that
suits a white rose. A long flowering season in our warmer climate. I'm starting
to think we're in for an early spring here... there are quite a few roses coming
back into bloom here though many are still coming back into leaf, depending on
when the rose was pruned by me. 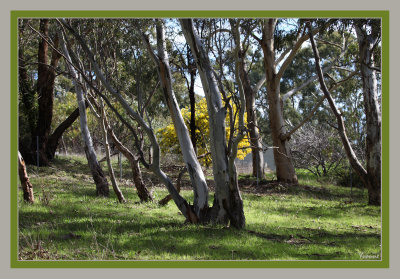 Back in the horse paddock
Now with a green carpet... and waiting for the spring to arrive. 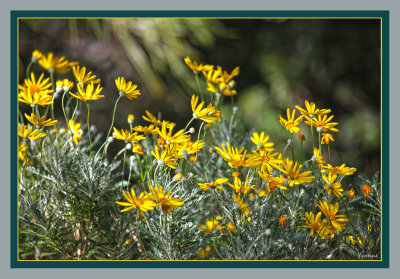 Blowin' in the Wind
Euryops - a tough little daisy bush, needs no attention at all, and it does
have a tough exposed spot to grow in surrounded by large trees a few roses and other plants.
I grew it from a cutting of a bush in another part of the garden. Flowers for most
of the year. 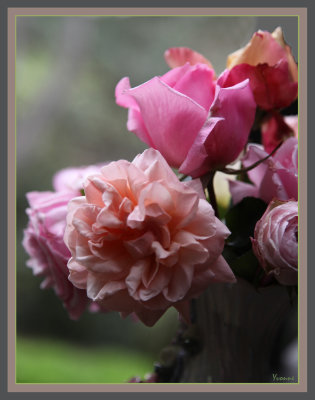 Last of the Winter Roses.
The day I featured Charles Mallerin (deep red roses) there were others in full bud
that I cut the day after for another vase.. so lucky I did because we've had some
awful weather that would have smashed the blooms. There were 5 different roses
in the vase, but this photo only features 4, the main one being the David Austin
rose "Ambridge Rose" and above it "Judy's Song" a section of "Souv. de la Mailmaison"
and up the top is "General Gallieni". The missing rose "Devoniensis".
Each day the blooms have opened up further, keeping
"Charles Mallerin" company creating a delightful fragrance throughout the room. 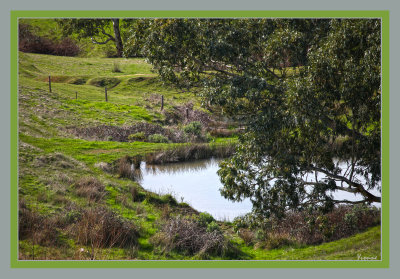 The small dam from next door.
Always looks pretty in the winter, they have a larger dam alongside that I often
feature; but having the long lens on my camera thought it an opportunity to take
a photo of this dam for a change. 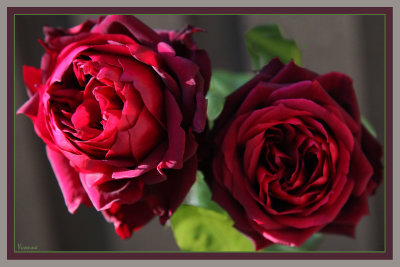 "Charles Mallerin" in winter.
It is still winter where I live, and I have finished pruning the roses, but
this particular rose (& a couple of others) had nicely formed buds that I left
unpruned and yesterday I discovered they'd both opened, and here they are!
The bush itself is not an attractive one, quite tall and sparse, but very worthwhile
having it in the garden, spaced back behind nicer looking bushes. The perfume is
divine - I picked these and popped them into a vase inside for us to enjoy.
Another good point regarding this particular rose, it isn't spoiled by the weather,
including rain... whereas Souv. de la Malmaison that also has many petals and a lovely perfume will ball in the wet. 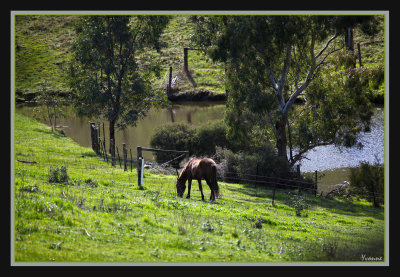 Merlin near a dam
The young horse enjoying fresh grasses growing near one of the dams.
click on thumbnails for full image