Autumn Leaves of red and brown.. the gorgeous balmy days of April & May

Various activities and scenes captured during the balmy days of autumn 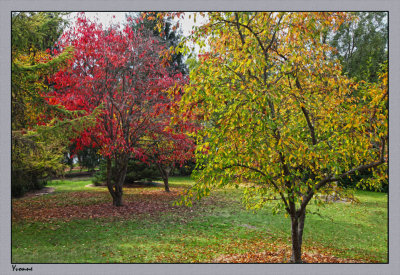 Contrasting trees
This will possibly be the last photo for this particular gallery, although
I still have a handful of photos taken & may add them at a later date.
We will be away for a few days and we will most probably be without access to online activity
during this period.. but I will be taking my cameras with me! :)
Best wishes to my dear friend Laine...hope all goes well.
I hope you have enjoying seeing some Oz autumn while you're all enjoying SPRING! 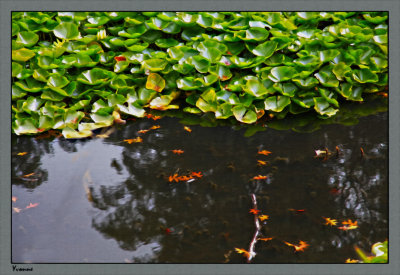 Reflections in the lily pond
We're back alongside the lily pond in the Mount Lofty Botanic Gardens when
the leaves of red & gold were still on the trees. Since this time we've
had a heap of rain, wind, fog and cold weather, so its lovely to look back
at photos taken a couple of weeks ago when we wandered around the lovely
hills garden. 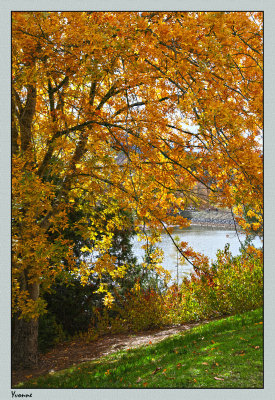 Golden tree
Another angle to the image I posted a few days ago, not sure which one I like best.
After a very rough few days of gale-force winds, heavy skies and rain I don't think
there'll be very many golden leaves still on any of the trees. We'll have to
wait until the autumn of 2017 or just look back at the photos taken this year. 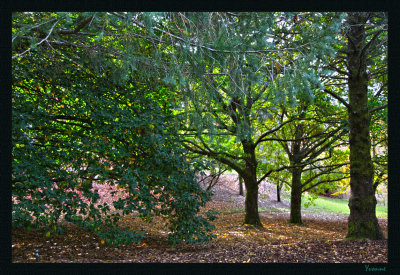 Carpet of leaves
Not quite as colourful as seeing colourful trees, but they still took my eye. 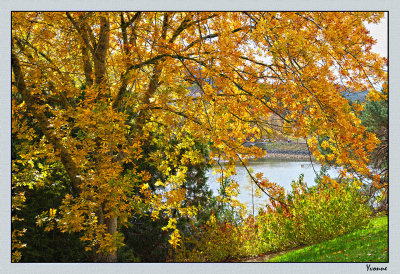 Arching colour
A delightful but overcast day with some lovely coloured leaves to admire... 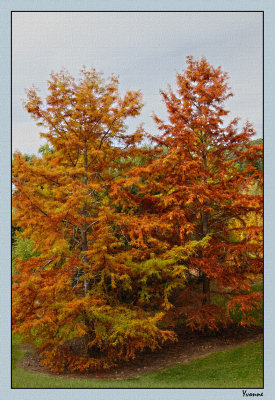 Two trees
This pair of colourful trees caught my eye as we walked the pathway around the lake...
Sorry I didn't get to comment on anyone's images - we arrived home
very late after a day in the country, too late and too tired to add a
new photo or make comments.
We were at a fund-raiser recital for the unfortunate people who
lost everything in the summer fires in the Pinery area of South Australia.
91 homes were destroyed and 2 lives were lost in the blaze spanning more than 82,000
hectares (203,000 acres). Many livestock were killed, including more than 53,000 poultry,
nearly 18,000 sheep, 500 pigs, 87 cattle, 19 horses and five alpacas 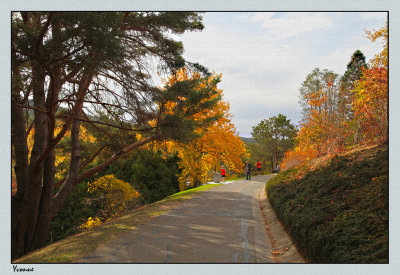 Pathway colour
The sun came out from behind the clouds briefly adding some extra light to
the scenery and causing some shadows on the path. The group up ahead of us
had been looking at a plaque that was describing the scene, which Dick did also
he always likes reading the information given on these signs. 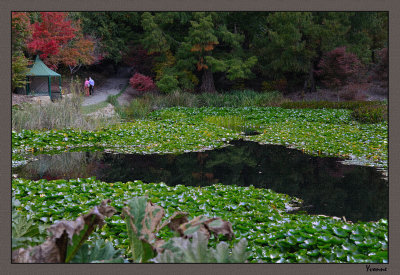 Close-up of the Lily Pond
I took a few photos as I walked past the lily pond that I featured a few days ago
unfortunately no lilies in flower this time of year, and there seems to be
heaps of them not leaving much water on display. In the foreground are huge
leaves which I believe belong to the rhubarb family. 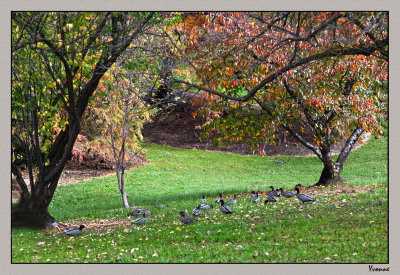 Ducks on the grass
Not far from the lake I discovered this bevy of waddling ducks wandering on the
grassed area between the trees... 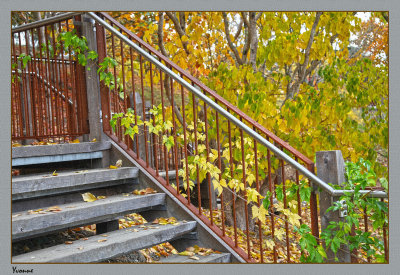 Coloured leaves and steps
The climber on the steps caught my eye, but you can see the leaves of an ornamental pear
showing some colour the other side of the steps. It was an overcast day for our visit
so the photos are a little dull unfortunately, but it was nice to work without worrying
about harsh light and shadows. 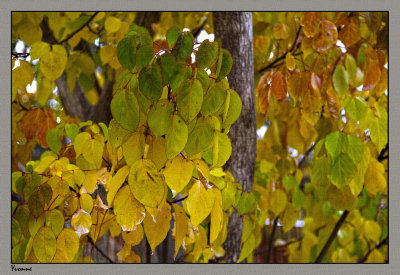 Ornamental Pear tree up close
I could get up quite close to this tree which I recognised by
its upright form and shape of the leaf to be an ornamental pear.
These are very popular where I live, a small tree with lovely colour
in both spring and autumn. 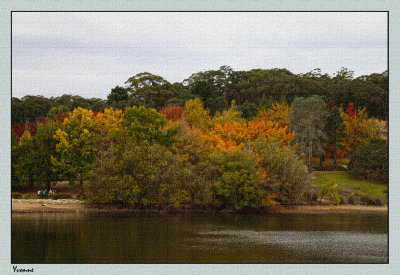 Surrounding the lake
Just one angle of the trees surrounding the lake that is centre stage in one section
of the gardens. This is probably the most popular area with many pathways leading
to & from the lake. You can see we had an overcast day for our excursion and I believe
I probably took a similar photo this time last year.
Best in original format if you have the space & time.
Link to a gallery taken at the gardens in 2015. http://www.pbase.com/yvonneii/mt_lofty_autumn_15
click on thumbnails for full image