The Great Ocean Road | This is Croatia | Feeling Blue in Santorini | Spain - Madrid, Toledo and Seville | Grand Mosque Abu Dhabi | Abu Dhabi Fish Market | A mild winter over Iceland | Uzbekistan - Golden Roads and Carpet Rides | Dubai (Under Construction) | Dubai Deserts | Greece - One Colour | Paris | Vienna! | Lebanon ... as it used to be | Fragments - This is Jersey | Syria | London in Summer | London in winter: The Living (How do you like your hot chocolate?) (continued) | This is Singapore! | Malaysia | Shameless on Mont St Michel | Jordan | 24 shots of Jordan | Istanbul - The Whirl of the Dervishes | Zanzibar | Greece - Through my eyes | Safaris of Tanzania | Colourful Istanbul | Prague at Random | Summer in St Malo (with a touch of Lensbaby) | The Saffron Trail ... Angkor Wat and temples in Siem Reap | A weekend in Muscat | Hong Kong | Scenes from Damascus | Bits of Scotland | Ephesus, Turkey | London in Winter: The Dead | Cairo | Maldives | Dubai Galleries | Oman - Fjords in the Desert | Oman - Landscapes of Musandam | Oman - Weekend in an oasis | Vietnam | Abu Dhabi Architecture | Pools of Heaven | This is Sri Lanka | New York New York 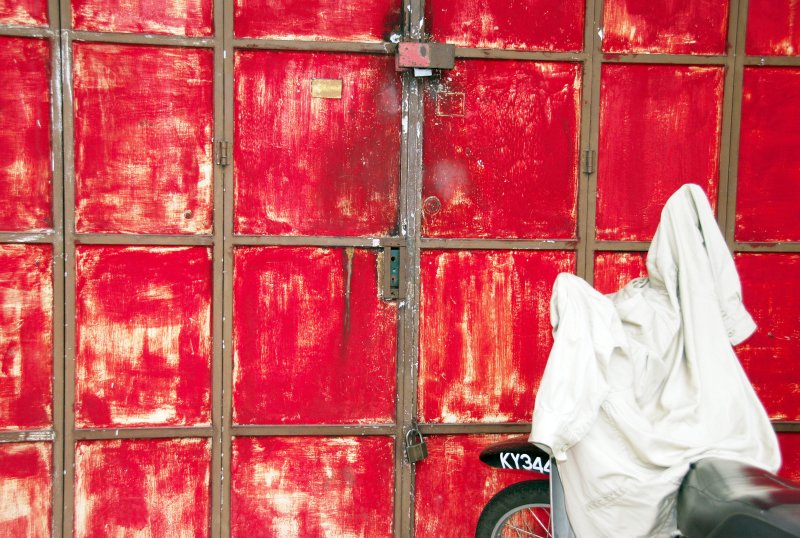 There is nothing like being away from home for a while to make one truly appreciate the place called home. I went back to Malaysia recently for a holiday, and having a visitor with me, I was compelled to act as a tourist guide, and in turn, became a tourist myself. So armed with a copy of "The Lonely Planet", I embarked on a road trip along the west coast of Pensinsula Malaysia, stopping by at Cameron Highlands, Penang and Langkawi. It was a real feast of the senses, having lived in the barren deserts of Dubai for a while, it was heaven to be amidst tropical rain forests millions of years old, to feel rain on my face, and to breathe in the salty air at the beach, incense sticks from the temples, hear the call of prayer from the mosques, and eat the massive varieties of food prepared in Malay, Indian and Chinese kitchens.

These are the sights, smells and sounds that I had always taken for granted while growing up, to experience them afresh was a real delight for me.

A combination of my usual Canon 20D and the Nikon D200. 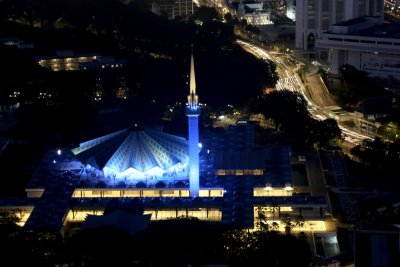 Masjid Negara
This is Malaysia's National Mosque, which sits at the edge of the city. Built in the 1960s, it consciously avoids the dome in the structure and instead has this unique shaped roof.
3 comments leave a comment 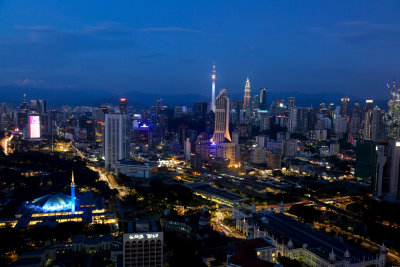 KL Skyline
This time, from the 45th floor and with a tripod. Having been away from Kuala Lumpur for 12 years, it's nice to see my favourite haunts from this level as well as loads of new buildings.
2 comments leave a comment 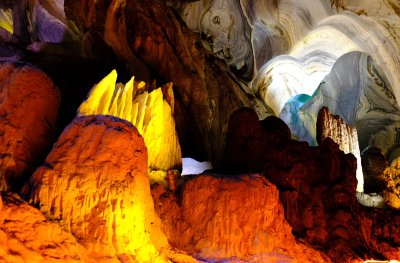 Caves in Tambun
Part of the Banjaran Hotstprings resort in Perak, Malaysia. A tiny cave, perfect for a few moments of tranquility.
0 comments leave a comment 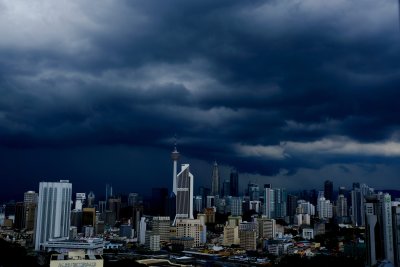 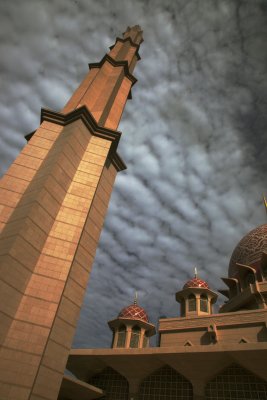 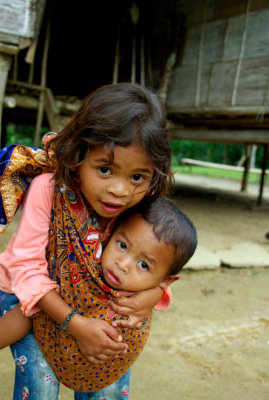 Babysitter
It took a half hour drive on a dirt road through the jungle in Cameron Highlands to go to this Orang Asli village. Orang Asli literally means native people, and are the aboriginal people of Malaysia. There are 18 tribes, this one was taken during a visit to the Semai tribe.
14 comments leave a comment 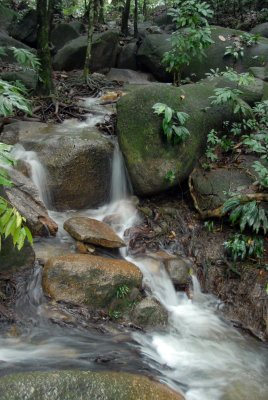 Good Feng Shui
At least that's what my friend Keat Ching claims - that having photos of waterfalls increases one's prosperity.
This was taken at the Forest Research Institute of Malaysia, a short drive away from Kuala Lumpur.
PS - Keat Ching - congratulations on your achievement! :-)
6 comments leave a comment 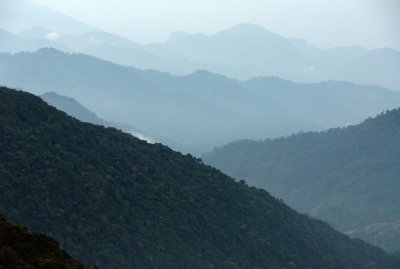 Tropical Rainforest
This is the view of Cameron Highlands, one of the traditional hill stations of Malaysia.
The hills, as far as the eye can see, are covered by dense jungles, which have mostly been untouched since the dawn of time, literally before even the ice age.
Looking at it again, while living here in Dubai where all trees are carefully tended to and are a novelty because of the scarcity of water, this scene appeared like paradise to me, even though I had grown up with this scenery all my life. Strange how perspective can change.
4 comments leave a comment 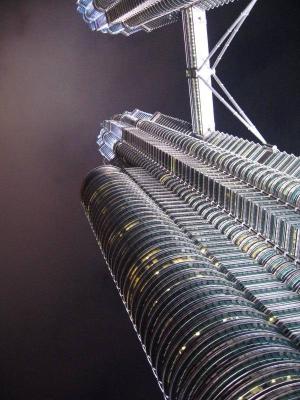 Pink
Clouds over Kuala Lumpur's most prominent icon, the Petronas Twin Towers.
This was taken as a sheer fluke, looking upwards, I noticed the pinkish clouds - not having my DSLR on me, I took a chance with my compact digital.
26 comments leave a comment 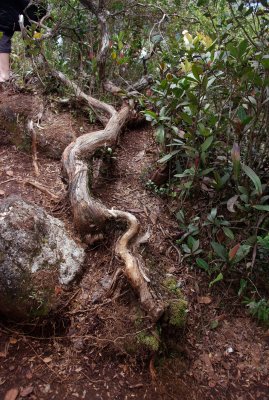 Roots
Taken in a moss forest in Cameron Highlands, the death of this tree continues the circle of life.
This was taken during a guided hiking trail close to Mount Brinchang, the ground you see is not earth, but compost. This forest itself is about 250 million years old, much older than the rainforest of Taman Negara which is said to be 140 million years old. Because of the altitude, vegetation is this forest is not as dense, and coupled with a cool climate, hiking along the trail was a very pleasant experience.
2 comments leave a comment

Black
My hometown, Kuala Lumpur, in panoramic glory. This was taken on a stormy night during a short visit there in April 2006.
7 comments leave a comment 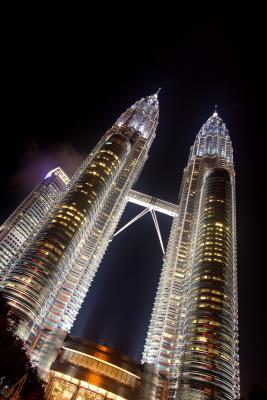