Melrose and nearby towns in May 2016

Various towns in the Melrose area, including Booleroo Centre, Orroroo, Pt. Germein and the Germein Gorge
after a 4 day expedition in May 2016 with our old friends. 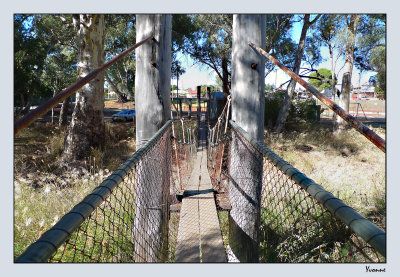 A close-up view of the Swing Bridge.
This will be the last image for this gallery.
To read info about the Swing Bridge, go to "Next" and see the photo I added yesterday. 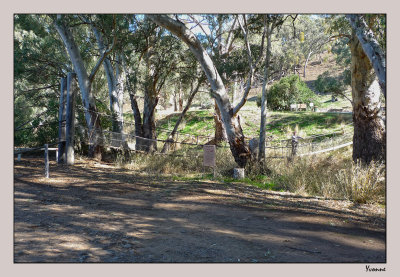 On the Swing Bridge
The bridge is over the Willochra Creek and is a replica built in 1990 to replace the
original bridge built in the 1890’s and damaged in the 1946 flood.
Located in a semi-arid to arid region with overall low annual rainfall and highly variable runoff,
the Willochra river system is ephemeral. The catchment’s main watercourse is the
Willochra Creek, which originates at the eastern base of Mt Remarkable.
Willochra Creek is approximately 205 kilometres long and flows north from the town of Melrose
through the Willochra Plain then north westerly until it discharges into the saline Lake Torrens.
Threats to the sustainability of the catchments water resources include reduced surface water
run-off, shorter seasonal flows, lack of flow during drought periods, and increased irregularity
in the frequency and volume of flow events.
[notes from Natural Resource Management Officer - Water, Clare]
The traditional owners of the area are the Ngadjuri peoples he first European explorer
to sight the plain was in September 1842 [Wiki]
I got Dick to stand in the middle of the bridge for this shot. 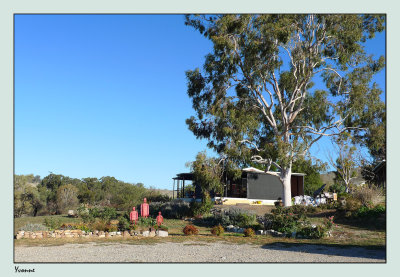 Winery and Devonshire Tea
Our friends noticed the sign offering Devonshire Tea at a boutique winery not far from
the old Bangor ruins so we decided to find this winery and take up their offer of
Tea and scones - and we were so glad we did! Not only 2 large freshly cooked scones, but
a choice of 4 different home made jams and fresh cream - and an offer of a decent coffee
besides tea! The lady was out working in her garden when we arrived and I think she
was glad of the opportunity to stop gardening and have a chat! The Blesings Garden
and winery was a highlight of our country holiday! I should add that Trev and Dick sampled
the wines. 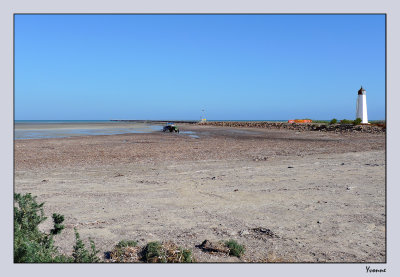 Tractor on the sands
The sea is out so far that the tractor is far in the distance for this photo.
You can see in this image how the lighthouse is set and you can also see
part of the longest jetty in the southern hemisphere, though it has recently
been closed off to the public because a recent storm almost halved the jetty
I believe it is going to be repaired in the future. 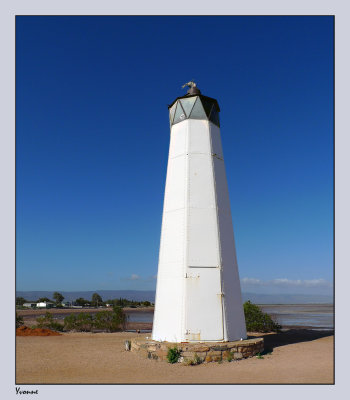 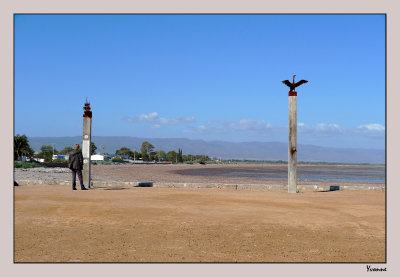 "Can you hear them.."
Originally named "Hummock Harbour", Port Germein was once an important transport hub for the surrounding districts
following the opening of its jetty in 1881 – at the time known as the longest jetty in the Southern Hemisphere.
Due to the shallow water along the coast, the long jetty was built to allow sailing ships to be loaded with grain
from surrounding districts. Bagged wheat came from the local area, the eastern side of the Southern Flinders
Ranges via Port Germein Gorge (opened in 1879), and from the west coast in smaller boats. About 100,000 bags of
wheat were loaded per year. The jetty was extended to its full length of 1680m in 1883. With the opening of the
port came an influx of workers from Adelaide, and by 1900 the town's population had grown to over 300. Use of the
port declined when rail was extended to Port Germein in 1934, and the jetty was later reduced to its present length
of 1532m due to storm damage. The historic Port Germein Jetty Site is listed on the South Australian Heritage Register.
[Wiki}
Our friend was reading a poem that was displayed beneath a model of the"Admiral Karpfanger"
a German four masted barque which disappeared 1938 carrying a large number of young cadets.
Here is some of the poem.
Can you hear the sea breeze moving, whispering, tiny waves that rise,
bringing movements in the dim light, bearing mournful sea bird cries.
Can you hear the breeze increasing, building high the urgent waves,
bearing long lost sailors spirits, from their far flung ocean graves.
Can you hear the sea wind whining, with the sobs of those that cried,
when the wild Horn claimed their stricken ships, and their cries for aid denied.
Can you hear the sea wind howling, screaming loud to the desperate sea,
rushing madly, tumbling shorewards, and the white spume blowing free.
Can you hear the sea wind roaring, mighty rollers breaking strong,
fetch those restless spirits swiftly from the hulks where they belong.
Mighty, graceful "Kobenhaven" great barque "Karpfanger" too,
rest eternal in the cape's embrace and with them lay their crew.
From Germany and Denmark near one hundred laughing boys,
they sailed to learn the sailor's trade, to taste the wanderer's joys.
Many hearts were broken, many mother's tears flowed free,
when the Lutine's dread bell tolled those ships taken by sea.
Poem by Noel Smith. 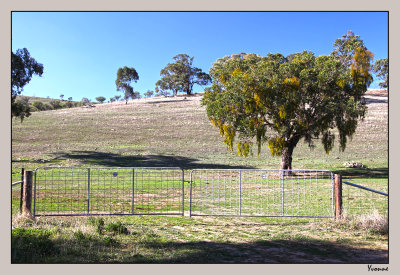 Farm Gate near Bangor Ruins
Wide enough to allow the big machines or a flock of sheep entry
to the paddocks. See previous 2 images to see the ruins and link to the
information. NB the parasite mistletoe hanging from the tree. 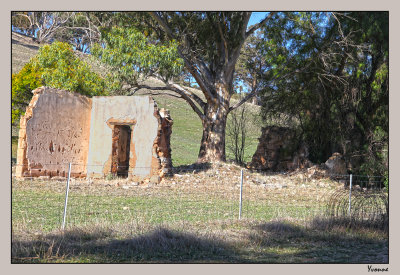 The ruins from another angle
Details of the ruins can be found via the link added to yesterday's
image. You can compare how they looked 6 years ago from the link.
We were driving through the Gorge because we were heading off to
Port Germein and I'll add photos taken there in a couple of days time. 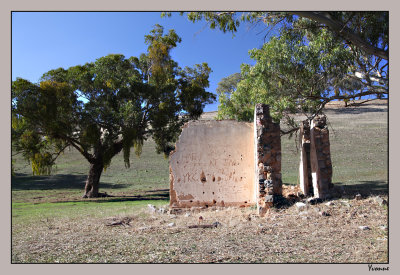 Relic of a Ruin
The last time we drove through this gap in the hills there was a lot more of
these ruins... unfortunately the ravages of a bush-fire and vandals not much
is left of it now. I believe it is the ruins of a hotel that once serviced
the horse and cart age as wheat and other farm produce were carted on the way
to a port where it was loaded on ships. Details can be found in another
gallery, http://www.pbase.com/yvonneii/germein_gorge_and_ruins and the photos
in this gallery show the ruins as they were last time we drove through here. 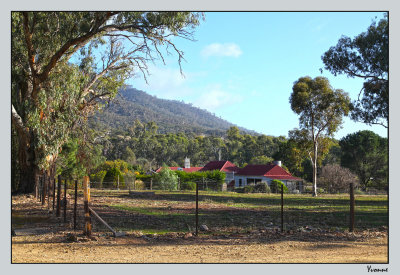 Morning sunshine...
I already took a similar photo of this view [see p2] but this one is different because the sun was
shining and the mountain was clear to see. I have this as a screen saver and I'm loving
seeing the sunshine when we're in the winter where I live... drizzle, rain, overcast and cold.
We're heading off for the weekend and there's no connection to the net where we'll be
I'll have to do a catch up with commenting when we get back home again.
Where we're going it will be no warmer than it is at home, but the scenery will be different. Enjoy your summer! 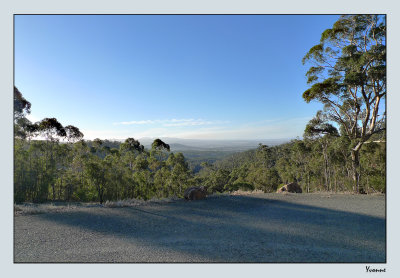 View of the distant scenery
On the long narrow road out of the Alligator Gorge we found a spot to pull over so
we could take a photo of the scenery before we met the main road. We passed a
small family of wallabies and as the day was drawing in we kept our eyes ahead
on the road in case there were more; they have the habit of suddenly darting
across the road in front of cars etc.
This will be the last photo taken from this stop over for 2016. 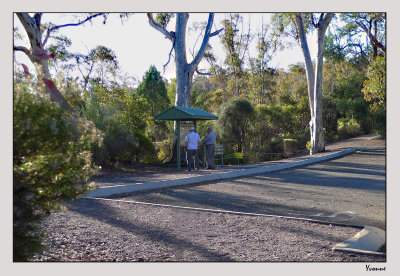 Back in the carpark, Alligator Gorge
Dick and Trev reading the notes and map of the trails available for hiking.
The site looks quiet in this image, but when we first arrived there was a bus load of teenagers
who were there to camp overnight, they had just returned from a hike on one of
the longer trails.
click on thumbnails for full image