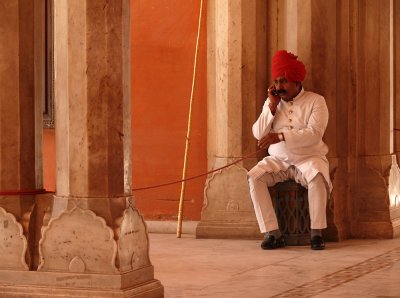 Guard, City Palace, Jaipur, India, 2008
The mixture of old and new, then and now, business and pleasure, will usually spark incongruous juxtapositions. In this case, a security guard, wearing a traditional turban, and surrounded by a historic palace, takes what appears to be an urgent cellular call.
4 comments leave a comment 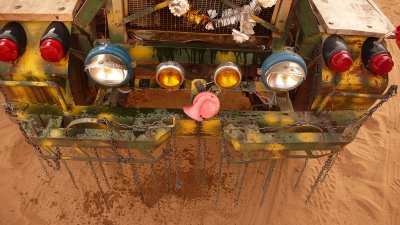 Village bus, rural Rajasthan, India, 2008
This is the front end of a handbuilt truck that serves as a bus in rural village, featuring such incongruous sights as eight lights and a tiny plastic horn
6 comments leave a comment 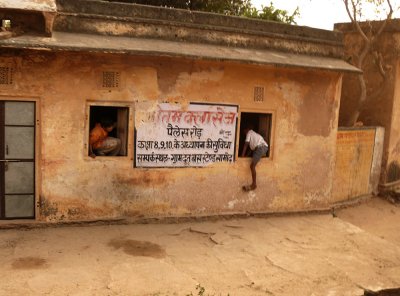 Schoolroom chase, Simode, India, 2008
Our bus was passing through the village of Simode, between Delhi and Jaipur, when I saw these boys chasing each other through schoolroom windows. I instinctively raised my camera to the bus window and made this shot. I was amazed to see that I had caught the ins and outs of the moment. This schoolboy prank contains the seeds of incongruity. I was fortunate that it worked out even better than it looks.
4 comments leave a comment 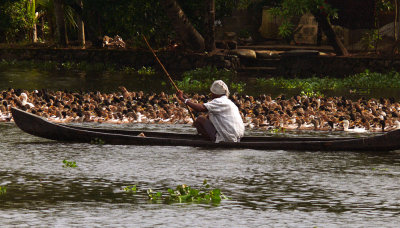 Duck farmer, Kerala Backwaters, India, 2008
Imagine my surprise when a fellow paddled by our boat accompanied by a thousand or more ducks! This image is made incongruous by such juxtaposition in this image. The ducks can’t fly away – their wings are clipped. All they can do is futilely paddle their own way to market, while a man with his own paddle herds them along.
2 comments leave a comment 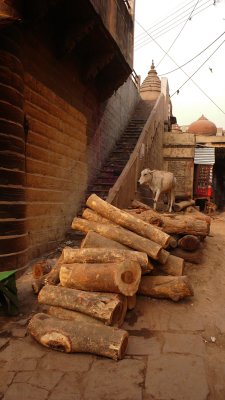 Cremation logs, Varanasi, India, 2008
Huge logs that will be used to fuel Varanasi’s cremation pyres make an elevated roadway for a wandering sacred cow. I found this juxtaposition to be incongruous – the logs will be used to consume the dead, while the cow will maintain the living.
0 comments leave a comment 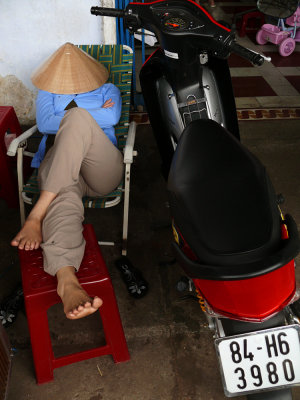 Nap, Tra Vinh, Vietnam, 2008
The conical hat, an iconic symbol of Vietnam, not only offers shade, but if pulled well forward, it can turn day into night. If this conical hat is the traditional symbol of Vietnam, the motorbike has become the ultimate symbol of Vietnam today. They are seen here in incongruous juxtaposition. When one is not trying to get somewhere, or struggling to keep up with the ever increasing pace and demands of daily life in Vietnam, they are often seen catching up on lost sleep. In Vietnam, from Hanoi to the Mekong Delta, sleep is often where you can find it.
2 comments leave a comment 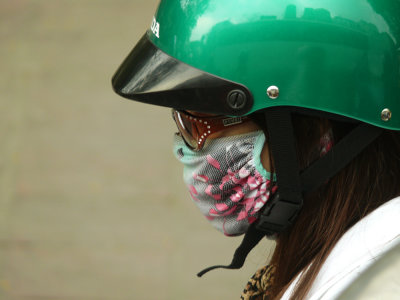 Fashion statement, Hanoi, Vietnam, 2007
Vietnam’s new helmet law, which just went into effect, requires everyone who drives or rides on a motorized bike to wear a crash helmet. This has created quite a stir, particularly among young people, who often seem more concerned about messing up their hair than preserving their skulls in the event of a crash. To offset the messy hair dilemma, new emphasis is being placed on helmet fashions, including color coordination. I took careful note of the traces of green on this rider’s facemask – it perfectly matches the color of her helmet. I also was startled by the effect of the rhinestone-studded glasses. I found the entire get-up somewhat incongruous – an attempt to make lemonade out of a lemon. The more fashionable the drivers try to become with their driving costumes, the more bizarrely incongruous the final effect. I made this close up image of a Hanoi cyclist from my tour bus window to prove my point.
2 comments leave a comment 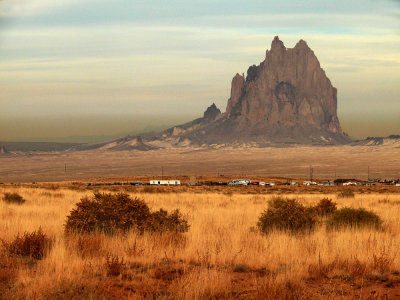 Ship Rock and neighbors, Ship Rock, New Mexico, 2007
Ship Rock is a rock formation rising over the high desert plains of Northwestern New Mexico. It is of great significance to the Navajo people and governed by the Navajo Nation. The Navajo homes in the foreground provide an idea of just how big Ship Rock is. This image is an example of scale incongruity, the juxtaposition of small subjects against large ones. Ship Rock itself is so large that it can be clearly seen from fifty miles away.
6 comments leave a comment 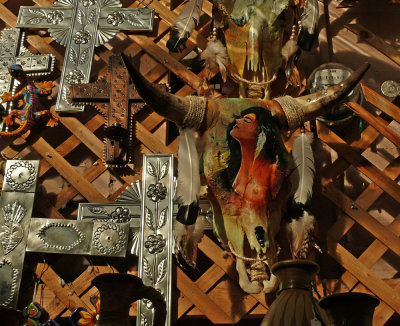 Mixed metaphors, Santa Fe, New Mexico, 2007
This "art" store targets those interested in theology, western kitsch, and nude Indian maidens. Apparently, this incongruously strange fusion of genres sells well in Santa Fe. The image speaks simultaneously faith and myth, of the Spanish and the Indian, and throws in an electric meter for good measure.
4 comments leave a comment 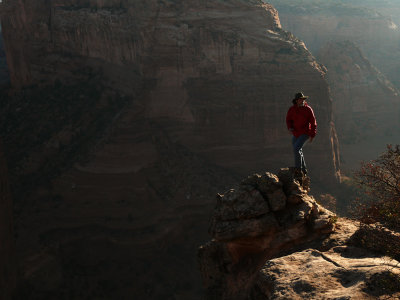 Balancing act, Canyon de Chelly National Monument, Arizona, 2007
Balancing on a few feet of rock over a 1,000-foot drop is not for the faint hearted. Yet our tour leader Dave Wyman incongruously seems quite at home in such situations. He looks away from his perch above the chasm, which makes this image seem even more frightening and incongruous. The play of light, towering cliffs, and scale incongruity make him seem even more vulnerable than he is. (I hope that he doesn’t try this again -- all it takes is just one misstep and....)
12 comments leave a comment 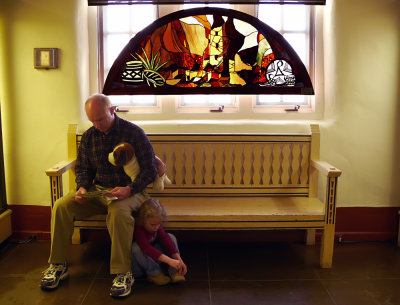 Baby sitting, Mesa Verde National Park, Colorado, 2007
I'm not sure if this man is baby-sitting the stuffed animal, the child, or both. In any event, it’s an incongruous situation. Meanwhile, the child seems more interested in exploring her shoes than investigating the cases of ancient pottery that lined the room. I made this image in Mesa Verde’s Museum – the stained glass window gives the image its sense of place. The man and child don’t even seem to notice this beautiful work, yet its vivid colors dominate the image. That adds still another incongruous touch to this image.
2 comments leave a comment 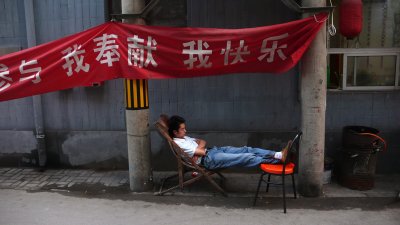 Snooze, Beijing, China, 2007
I can’t read what the red banner proclaims, but this particular fellow certainly seems unmindful of its exhortations, whatever they might be. The relationship between the banner, which seems to call us to action, and the inaction of the sleeping man, is incongruous. Since both the banner and the sleeping man are horizontally displayed, I choose a 28mm wideangle lens to stress the flow of both elements.
(After I posted this image, pbase artist Sheena Xin Liu, a Chinese student now living in the US, has left a comment telling us that the red banner says "I contribute my efforts, then I rejoice." As she notes, "instead of a sweating worker laboring under this banner, we discover a drowsy man making himself comfortable in a two-chair bed." The words on the banner, juxtaposed with his somnolent posture, double the incongruity here.)
12 comments leave a comment