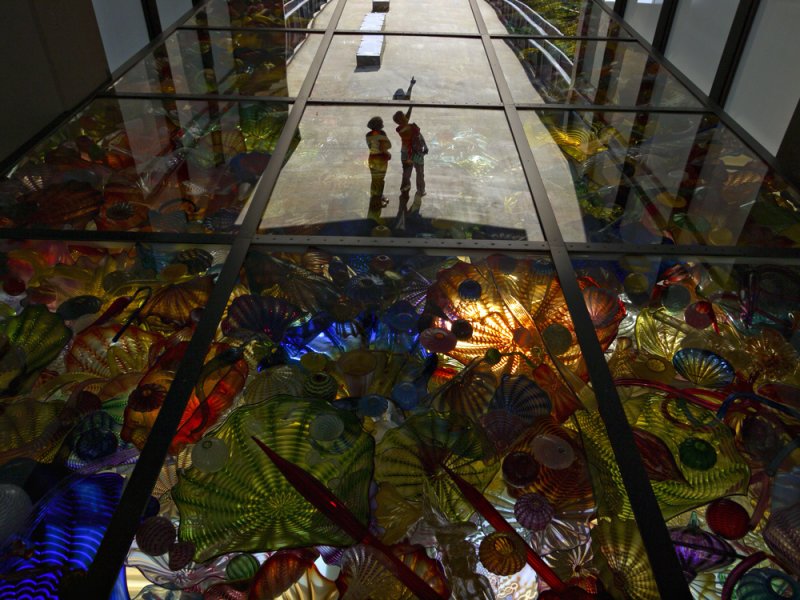 Chihuly Bridge of Glass, Tacoma, Washington, 2009
This 500 foot long bridge links downtown Tacoma to its waterway. Conceived by Tacoma artist Dale Chihuly, the bridge features more than 2,000 glass objects placed on a plate glass ceiling. I aimed my lens up at the objects, which are illuminated by natural light. The plate glass ceiling reflects the walkway below it, along with two people viewing the art. My reflected image makes the people part of the art, and that echoes Chihuly’s point in conceiving the bridge.
2 comments leave a comment 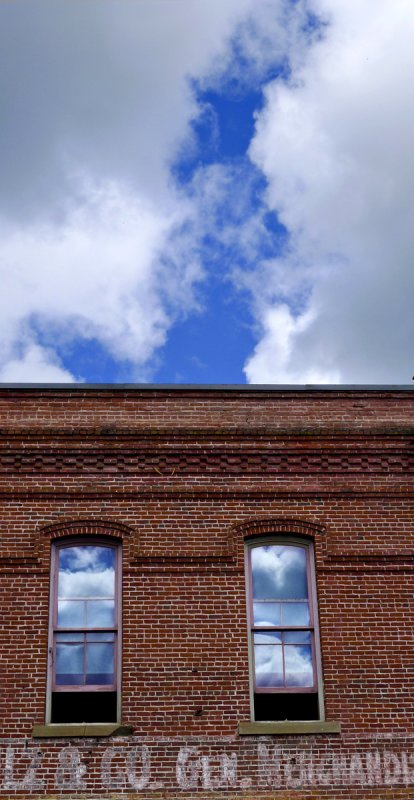 Ghosts, Jacksonville, Oregon, 2009
Jacksonville is an amazingly well preserved Victorian town. Its streets are lined with 19th century buildings, including this old structure which stands on a side street like an old ghost. I noticed two clouds hanging directly over the building. The sky and pair of clouds that begin at the top of the frame seem to continue via reflections within the pair of windows at the bottom of the frame. This image makes the building seem to be transparent, and even more ghostly than it is.
2 comments leave a comment 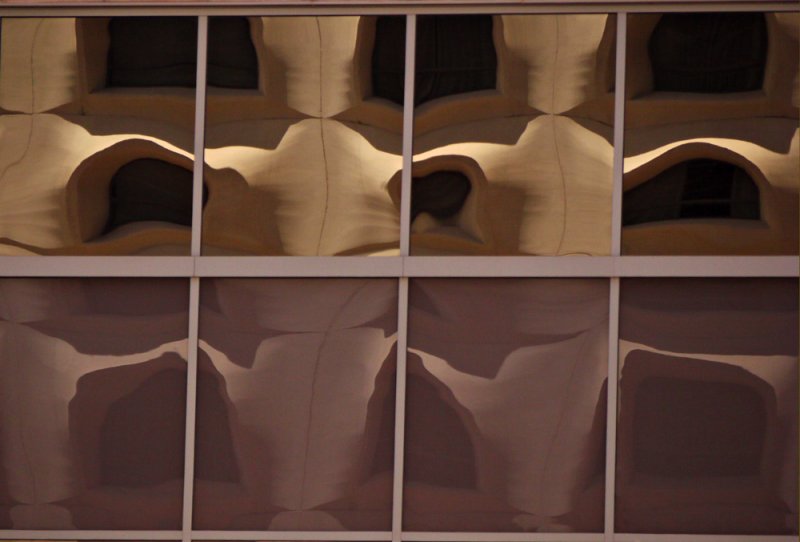 A city abstracted, Phoenix, Arizona, 2009
Eight windows, each of them reflecting a different aspect of the building across the street. No two reflections are alike here – the window materials color them, distort them, and retain them. There were dozens of such windows, but I choose only eight here to create a simplified matrix of the mysterious.
2 comments leave a comment 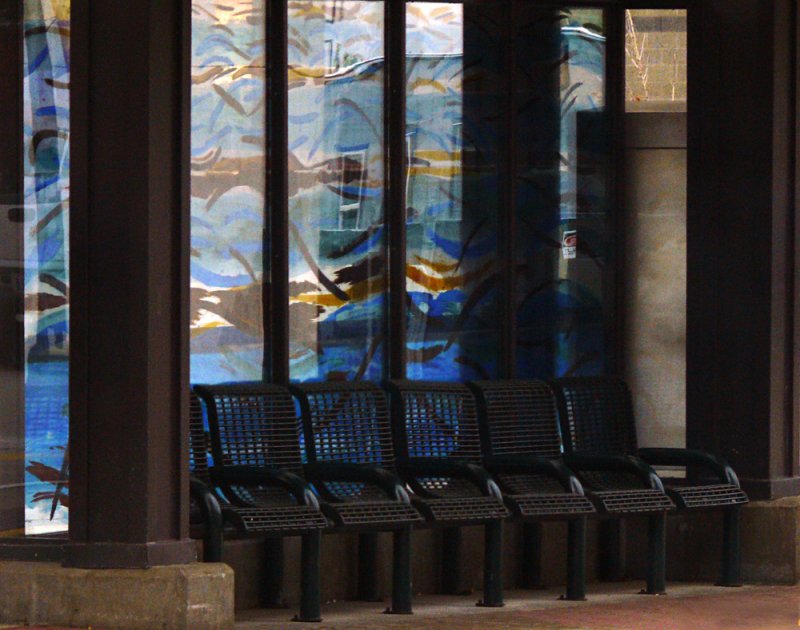 Tram stop shelter, Salt Lake City, Utah, 2008
The panels on the back of this tram stop shelter reflect colors and shapes reminiscent of an abstract painting. The only recognizable features are the windows that echo the vertical shapes of the panels. Meanwhile, all six chairs stand empty, allowing the glow of the reflected to colors to embrace them as well.
2 comments leave a comment 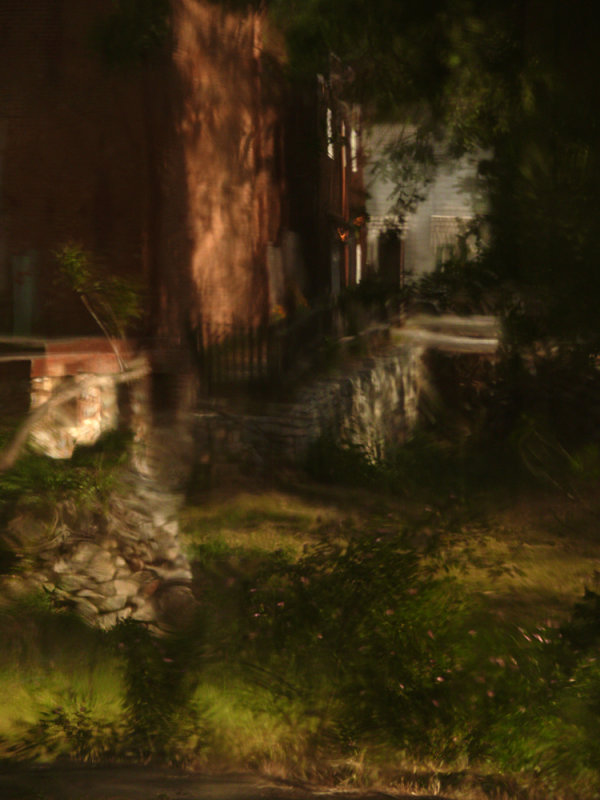 Garden of time, Columbia, California, 2008
Columbia is a perfectly restored Gold Rush town. In fact, it looks a bit too perfect. Every image I made of its old buildings looked like post card views. To overcome this issue, I searched for ways to abstract the town so that we could look into the past without seeing the present. As I walked Columbia’s streets, I noticed that many of the windows in the restored 19th century buildings were original – the glass produced wavy reflections. I then focused my attention on those wavy reflections until I found one that best characterized the Gold Rush era. This image was the result – an abstracted vision of softly focused and slightly distorted buildings and gardens carrying us back into time itself.
6 comments leave a comment 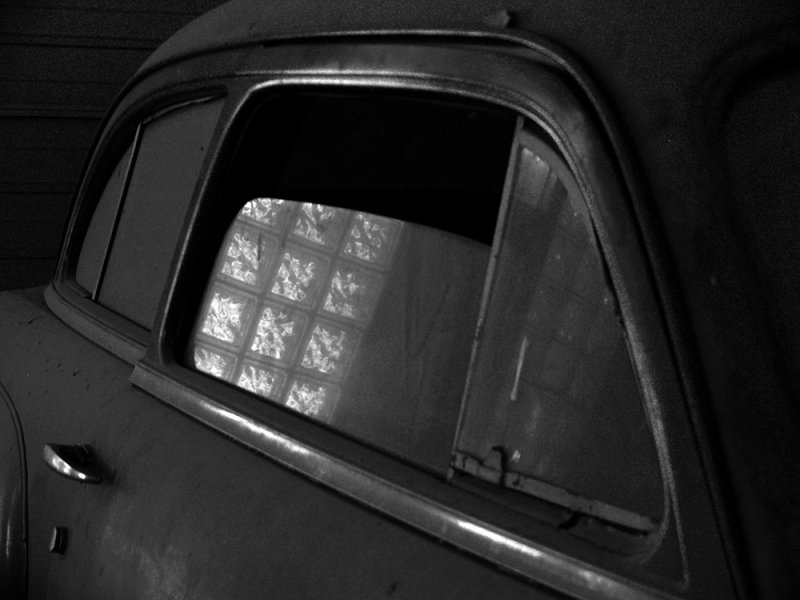 Reflection in a car window, Placerville, California, 2008
Instead of describing the entire car, I move in to stress the light passing through the glass bricks reflecting on its partially open window. The effect is haunting, and matches the materials of the period to the era of the car itself. I converted the image to black and white, because the car and the design of the glass brick window look like they belonged to an era of black and white photography. The reflection of the glass brick window also divides past from present – we stand in the present, yet whispers from the past can be imagined coming from the dark interior of the car.
4 comments leave a comment 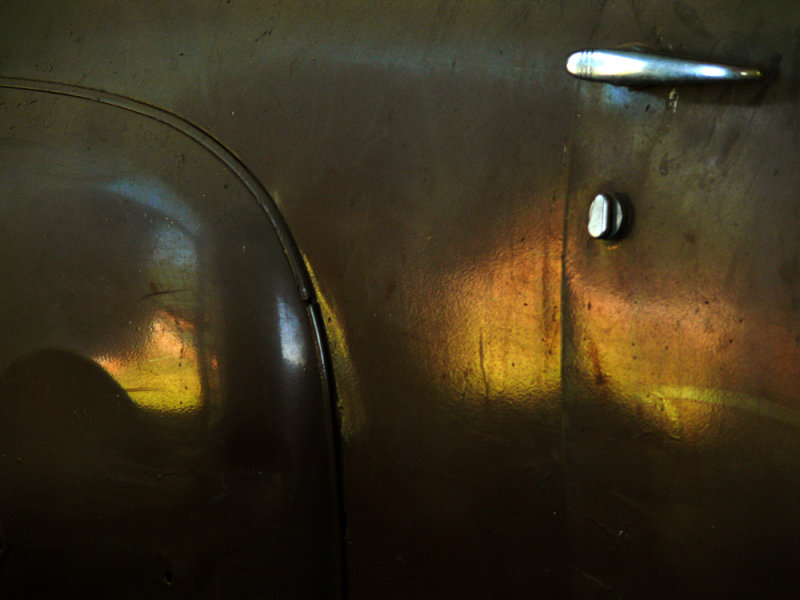 Reflected colors, Placerville, California, 2008
This is the same old car that appears in the preceding image. I simply lowered my camera to stress the play of light across the body from the glass brick window, and use color to characterize the beauty of its reflection. The reflected object is a yellow house that is partially visible through a glass brick window. My choice of shady white balance turns the reflection coppery. The curved fender and the chrome handle and lock add automotive context to the glowing light on the body of the car.
0 comments leave a comment 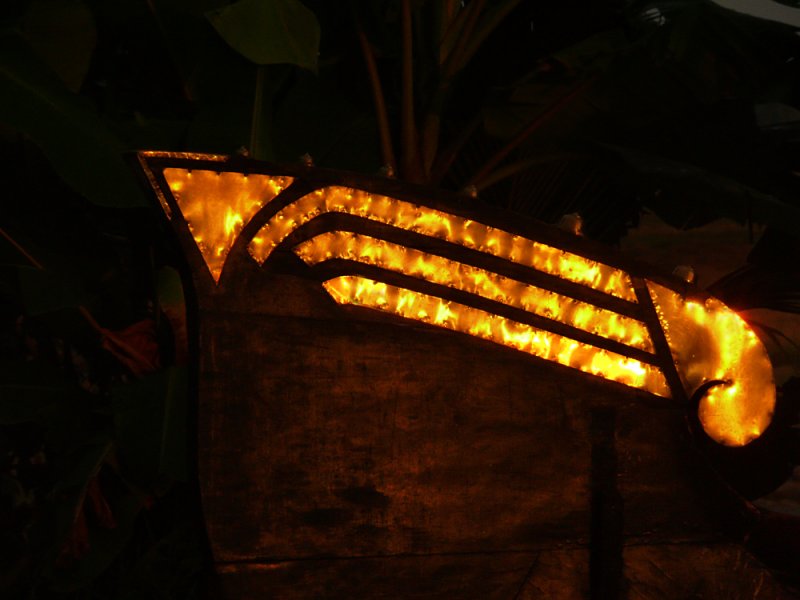 Sunset, Kerala Backwaters, India, 2008
I caught the reflection of the setting sun on the traditional ornamental bow of a Kerala houseboat. I show very little of the hull, as I allow the golden panels of reflected light to symbolize the Keralan culture on their own.
0 comments leave a comment 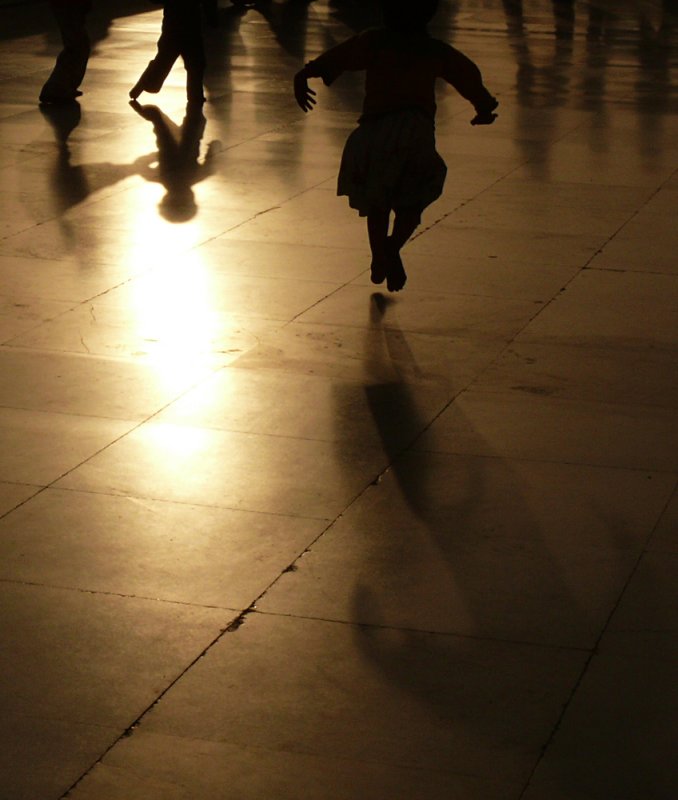 Impromptu dance, Delhi, India, 2008
These children were at play on a marble terrace surrounding a Hindu temple. It was late in the day and the reflection of the sun on the marble was blinding. I abstract the children by backlighting them and cropping most of them out of the frame. What they leave behind is pure exuberance.
6 comments leave a comment 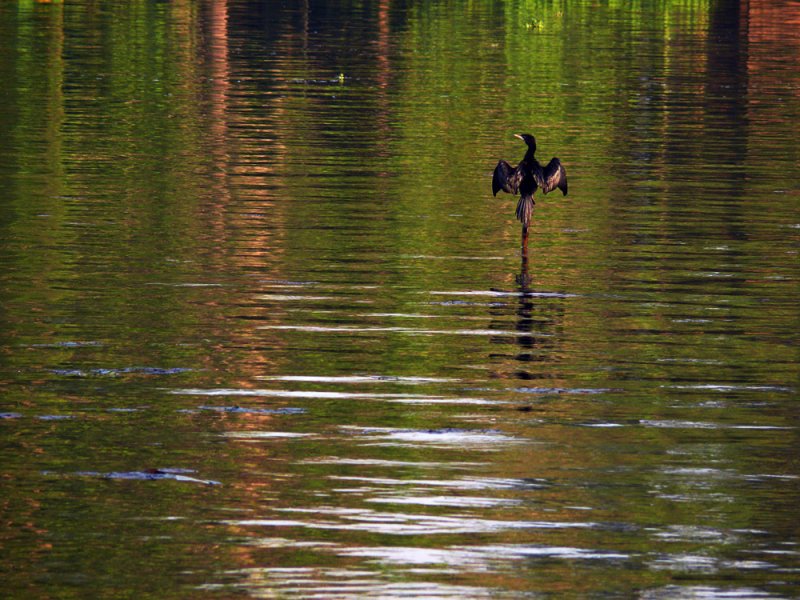 Cormorant, Kerala Backwaters, India, 2008
We saw thousands of Cormorants on these waters. This one is drying its wings. The abstracting power of the reflection here is as important as the bird on the stick. It makes the image shimmer in green and copper, leaving the cormorant alone with nature.
2 comments leave a comment 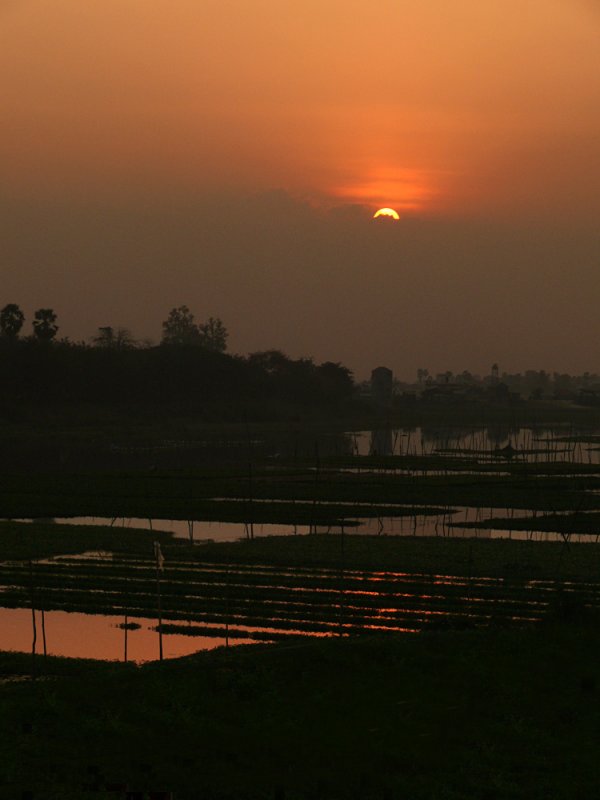 Vanishing sunset, Phnom Penh, Cambodia, 2008
On my trip to Vietnam and Cambodia, sunsets (and sun itself, for that matter) were hard to come by. December in this part of the world often brings overcast weather. However we had nothing but sun during the day and a half we spent in Cambodia at the end of the trip. We wanted to make our last sunset a special shot. To do so, we asked our guide and driver to travel west into the sunset, while we looked for places that might add a worthwhile context. It was race against both time and weather. We could see the sun sinking in front of us, and we could also see a massive cloudbank reaching up from the horizon, ready to swallow it. With only seconds to spare we spotted a large field of morning glories off to the left. We found a platform that overlooked those fields and saw to our delight that the fields were flooded with water that reflected the setting sun back up at us. I had time to make about three pictures before the sun vanished into the cloudbank. I liked this one the best because it shows the least sun. Only a crescent remains, which to me, at least, is more abstract and less literal than a whole sun would be. What is most important here is the context offered to the setting sun by the reflection in the morning glory fields. We do not see the sun itself in the reflection, but instead the effect of the sun. There is still room here for the imagination of the viewer to work.
0 comments leave a comment 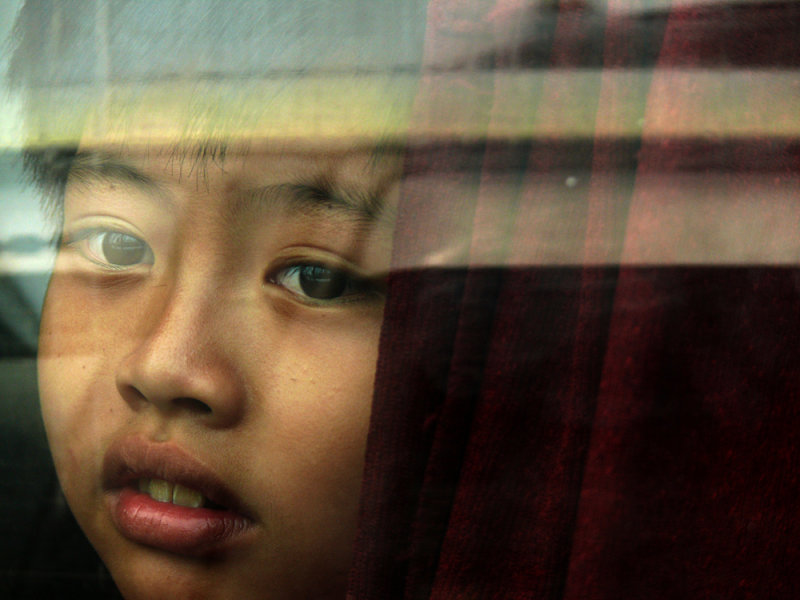 A face in the window, Mekong Ferry, Ben Tre, Vietnam, 2008
There was a distant caution on this child’s face, peering out at me from the back seat of a van being hauled across the Mekong River on a ferryboat. However just as important as the face is the reflection that descends over the image from the top. The child is already peering out from behind a curtain. The reflection adds a secondary curtain that suggests his isolation from the outside world. He appears somewhat sad and very vulnerable –we were used to getting big smiles and “V” signs flashed at us by Vietnamese kids, yet this young boy never altered his cautious demeanor.
4 comments leave a comment