Gallery Fifty Nine: Using dramatic light at the fringes of the day 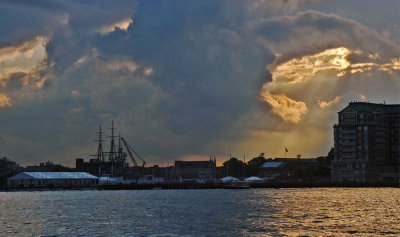 Shower at Sunset, Charlestown Navy Yard, Boston, Massachusetts, 2019
I made this image while crossing Boston Harbor in a water taxi. A summer storm was moving across the area, yet the setting sun managed to shed its rays through the cloud-laden evening sky just as most threatening clouds arrived. The masts of the world's oldest commissioned naval ship, the USS Constitution, which is permanently docked at the Charleston Navy Yard, are silhouetted against the oncoming storm, adding a sense of place to the scene. The waters before us range from black to blue to golden as the dark clouds sweep in a billowing arc overhead.
I had to work very fast, because this unique evening light would linger for only a matter of seconds before becoming obscured by the storm clouds.
0 comments leave a comment 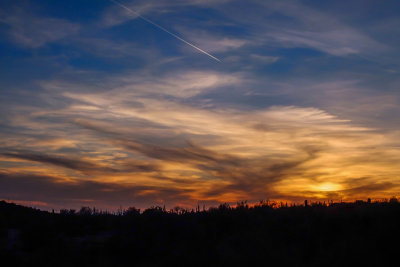 Sky at sunset, Gold Canyon, Arizona, 2013
A large jet begins its descent into the Phoenix Sky Harbor Airport, about thirty away from my camera position. I caught its long diagonal contrail as it echoes a cluster of diagonal clouds gathered about a setting sun. By spot metering on the setting sun, I underexpose this image, abstracting a cluttered horizon lined with what would be distracting buildings and trees. I thereby simplify the image, and allow the rich colors of day’s end to tell the story here.
0 comments leave a comment 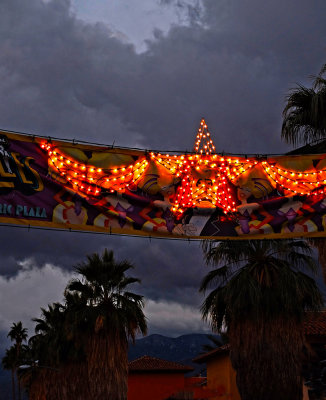 Desert celebration, Palm Springs, California, 2013
The main street of Palm Springs is adorned with promotional banners, some of them superimposed upon holiday decorations. I use one of these illuminated banners to symbolize a time of festivity. The banner itself promotes the “Fabulous Palm Springs Follies,” a local vaudeville show. I made this image at dusk in order to abstract the banner itself, and only imply its cartoonish character. The glowing orange, yellow and red holiday lights, forming a flag-like bunting as well as a star, dominate the image at this time of day. The sun has already set, yet the night has not yet begun. Storm clouds, sweeping over the neighboring mountains, frame the banner, while an array of palms and a nearby hotel add local context.
2 comments leave a comment 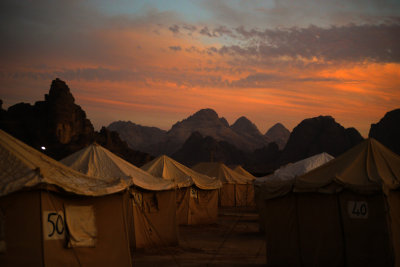 Desert camp, Wadi Rum, Jordan, 2011
Visiting Wadi Rum at day’s end offered stunning views of desert landscapes. After sunset, we gathered in a large desert camp for dinner, and while it was being cooked, I wandered off into the rows of empty tents intended for large tourist groups. (This year’s political upheavals in the Middle East have cost Jordan dearly in tourist revenue.) I noticed that the pointed roofs of the tents echoed the range of mountains that cross this desert, made famous by Lawrence of Arabia’s exploits here during the First World War. The sun had already gone down, leaving its golden imprint on the evening sky and on the range of thin clouds that floated overhead. A 90mm short telephoto focal length helped me weave the layers of tents, mountains, and sky into a harmonious scene.
6 comments leave a comment 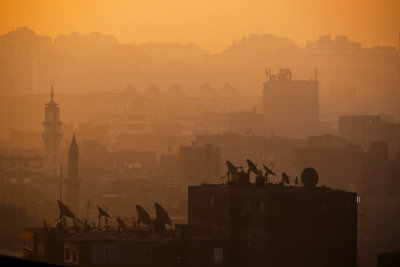 Dishes at dawn, Cairo, Egypt, 2011
Mosques and satellite dishes dot the skyline of downtown Cairo – I made this image at dawn from the balcony of our hotel room. The warm first rays of the sun cause a mist to rise from the cool streets of the city, creating a characteristic haze that lingers into the day. The golden hour is upon us, and those dishes seem like giant ears and eyeballs turned toward the circling satellites far above the city. Cairo both makes and seeks news in this particular month – its people had just shed an authoritarian regime, only to face new threats to freedom from their own army’s generals. Just a few days after we left Cairo, Tenihir Square, only a mile or so beyond these very buildings, would once again be teeming with angry protesters.
4 comments leave a comment 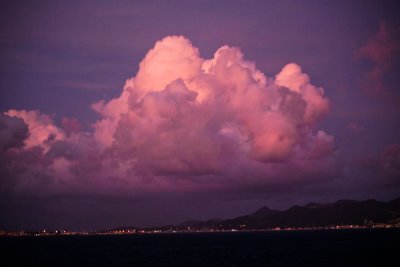 Dusk, St. Martin, French West Indies, 2011
The first day of 2011 was near its end as our cruise ship churned past the island of St. Martin. An enormous cumulous cloud hovered over the hilly island, reflecting the fiery pink glow of the sun that had already gone down. Along the shoreline, a strand of lights defines the border between the ocean and the island.
2 comments leave a comment 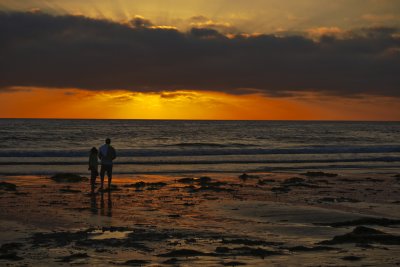 Waiting for sunset, Mission Beach, San Diego, California, 2010
The sun hides behind a band of clouds, which sets the horizon afire and tinges the shoreline with golden light. The two figures make the image real – they are as stunned by nature’s beauty as we are and no doubt savor the sight. We can sense the emotions they must they must be feeling here. I compose the image by stacking five alternating variations of color in the sky, water, and land.
2 comments leave a comment 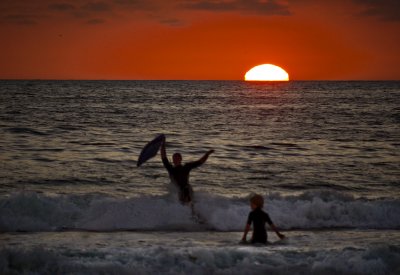 Evening surf, Mission Beach, San Diego, California, 2010
The sun is already dropping below the horizon as a surfer raises his arms, saluting the end of his day riding the waves. If we listen, we can almost hear him shout. I am sure his small child is doing just that.
2 comments leave a comment 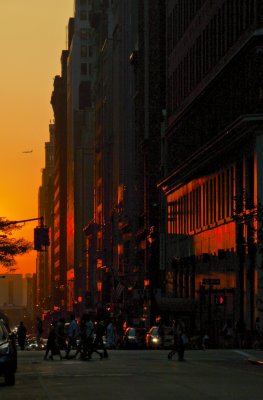 Midtown sunset, New York City, New York, 2010
A setting sun burnishes the facades of these New York office buildings and shops, yet day's end does not slow the pace of activity here. We can see the traffic approaching us, the pedestrians crossing the street, and even two silhouetted photographers waiting in the distance -- they were (dangerously) shooting the setting sun from the middle of the street. A passenger jet is suspended in the distant sky as it descends for a landing at Newark Airport. I exposed for the golden sky, and allowed the rest of the image to recede into shadow and glittering reflections.
6 comments leave a comment 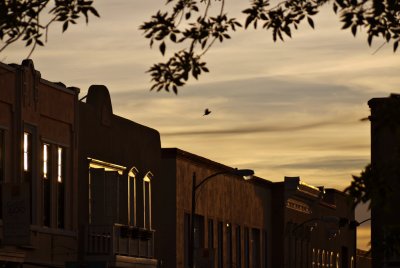 Sunset, The Plaza, Santa Fe, New Mexico, 2010
The sun was fading slowly behind a lightly overcast sky. I liked the horizontal streaks in the clouds and the way the diffused sun warmed the facades of the vintage buildings surrounding Santa Fe’s famous Plaza. I did not count on a pigeon to fly through my frame at the moment I shot, but I will accept this gift of nature. The pigeon’s fluttering wings elevates this image from an evening mood piece to a memorable salute from the natural world.
5 comments leave a comment 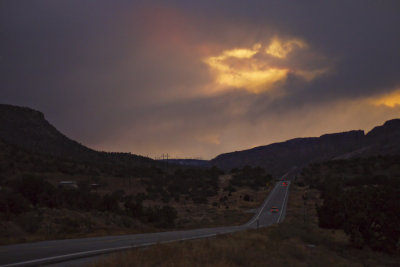 Cloud of gold, Navajo reservation, near Kayenta, Arizona, 2009
The evening sky was overcast, but on this night, the setting sun found a thin spot, creating a cloud of gold bearing a red halo on its shoulder. To add context, I include a rising road, and waited for two cars to pass below the cloud, their red taillights echoing the red halo in the sky. This is one of those images that can only be made very early or very late in the day, when the sun’s path lies close to the earth.
2 comments leave a comment 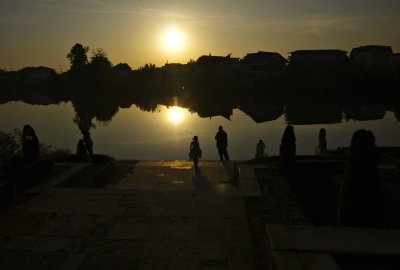 Double sunset, Mogosoaia Palace, outside Bucharest, Romania, 2009
The houses and trees on the opposite of a lake appear twice in this image, along with the sun, by virtue of reflection. The two silhouettes in the center become the focal point of the image. I had the advantage of following these people to this spot – they brought us to this remarkable palace that once controlled late 17th century Wallachia. Pbase photographer Lorin Niculae, who hosted us in Bucharest, along with his daughter Silvia, are standing in the right spot at the right time – at the glowing fringe of the day itself.
0 comments leave a comment