PORTRAITS of ASIA: this is the title of my first ever exhibit at One Workshop Gallery
in the Philippines (July, 2006).

My big thanks to Mr. Ross Capili for giving me this big break
and for opening up a lot of exciting opportunities for me.

I wanna share with you the images featured in the said exhibit.
Here's a walk through my gallery and the story behind
some of the unforgettable portraits I've taken.

I will continue with other pictures
which I wished included in the exhibition.
These are pictures that had won awards in various online competition and/or
had been published in international magazines.

This gallery will be updated regularly. 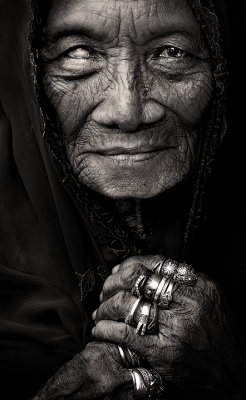 Stories of Her Life
Iloilo, Philippines
April 2006
Rosalinda, mother of eleven, a cigarette vendor.
There’s a lot more to tell.
But I don’t want to state the obvious.
Just take a closer look and examine every line of her wrinkles.
The saying that “some pictures are worth a thousand words”
is an understatement in the case of Rosalinda.
Any picture of her is worth a thousand of stories
with a million words.
First Place: Texture Challenge (www.dpchallenge.com)
First Place Winner, People Category (www.betterphoto.com) 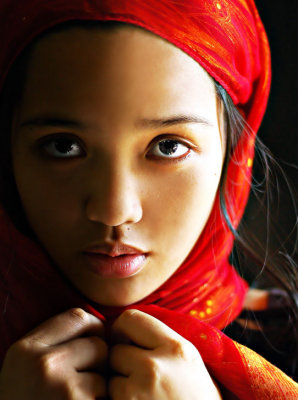 K A T R I N A
Bangkok, Thailand
March 2005
A window-light, a red veil, and a beautiful lady…
these are the main ingredients for this memorable picture.
Throw in a slice of emotion to spice up the image.
Katrina is my goddaughter and it is hard to believe that
the baby I once held in my arms during her baptism
is now posing for me as a full-grown woman.
Coincidentally, this picture is also my baptism
in the world of publication when it was used as a banner
to announce a Creative Portrait competition
in the Digital Photo magazine, UK.
Second Place: Photo of the Month
www.digitalimagecafe.com 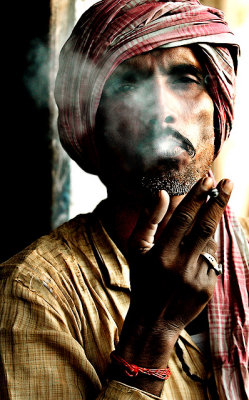 P R I D E
Kathmandu, Nepal
October 2005
Behind the thick cloud of smoke obscuring his face,
I saw a proud man sitting in the bench
in front of a convenient store fronting our hotel.
It was an early morning walk that I credit this shot for.
When I travel with group tours, I woke up two hours
before the scheduled activity to explore the place on my own.
With preying eyes, I sweep the place for an interesting subject
and in this case, I didn’t have to go that far.
Published: Mabuhay Magazine
In-Flight magazine of Philippine Airlines 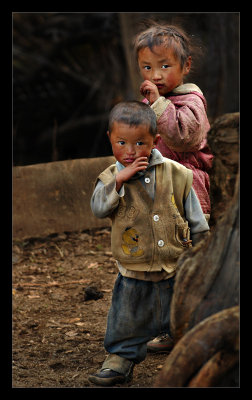 I N N O C E N C E
Zhongdian, China
October 2004
What started as a comfort stop turned out to be a fruitful harvest.
Abstaining from the use of any comfort room facility
in Zhongdian Province, China,
whenever our tour group stopped for such,
I wandered around looking for some people
and sceneries to capture.
This scene was far more comfortable than the comfort facilities.
Two wide-eyed innocent faces met my searching stare.
I was more than relieved.
Second Place: Photo of the Month (www.digitalimagecafe.com) 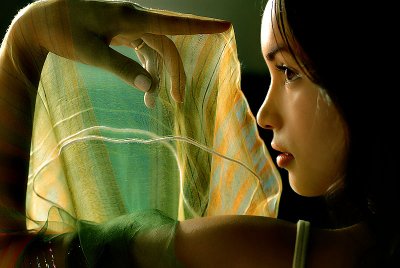 K R Y S T A L
Bangkok, Thailand
November 2005
This grand prize winner at betterphoto.com
(chosen from among 36,000 entries from all over the world)
is a product of trust.
This was my seventh photo session with Krystal
and what I liked most about her is her being self-directed
during most of our sessions.
I handed over the thin veil and told her to do whatever she wanted to.
It was wonderful to just sit back
and observe how she played around with the veil.
Without trust, this shot wouldn’t have been possible.
Grand Prize Winner for April: (www.betterphoto.com) 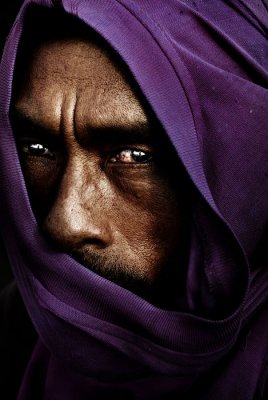 D E S O L A T I O N
Bali, Indonesia
June 2006
He is one of the dockworkers in Kusamba, Bali.
I trailed behind him the moment
I caught a glimpse of his powerful stare.
Hoping that he wasn’t as antagonistic as he looked,
I eventually mustered enough guts
to point my camera at his direction.
He smiled back and I replied with a few more clicks.
His expression changed as I waited for that right moment.
I guessed it was all worth the wait (and risk).
Runner Up:
Photographer of the Year 2006
Digital Camera Magazine (UK) 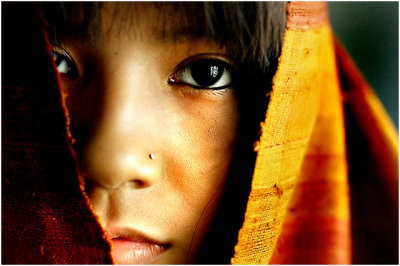 E Y E S
Bangkok, Thailand
November 2004
My most published photo,
this also won awards in various online competitions.
Ironically, the story behind this shot was very straightforward.
I told Noon, a student in my class,
that I would take a picture of her the next day.
Towards the end of the class period that day,
I sneaked out of the classroom with her,
positioned her in the corridor,
threw in a veil that I bought from Laos,
focused on her eyes
and clicked thrice.
Some good things happen right before your eyes.
First Place: Defining Feature Challenge
(www.dpchallenge.com) 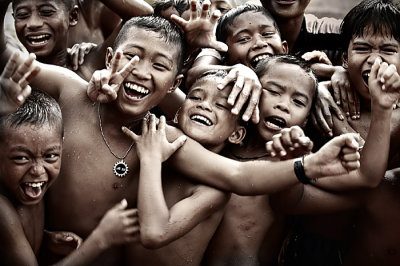 P E E R S
Kanchanaburi, Thailand
September 2005
Intimidated –
that’s how I felt when a group of young boys
rushed to me while I was shooting one of their peers.
But why should I?
I stood my ground and continued to fire.
When the smoke cleared out,
victory was declared from both sides.
They had their moment of handsome glory
and I had one of the best candid moments
frozen in time. 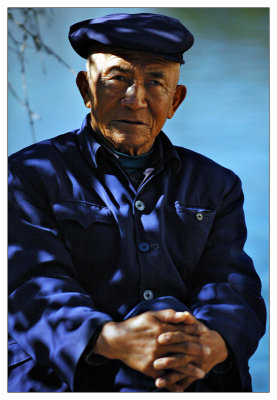 S E R E N I T Y
Lijiang,China
October 2004
The blue color set the mood.
Framed by the cool water of the lake
with the shadow and light playing around
his calm demeanor,
I couldn’t ask for more.
I smiled and he smiled back with a subtle reassurance.
I played cool and carefully pressed the shutter.
Published: What Digital Camera Magazine (UK) 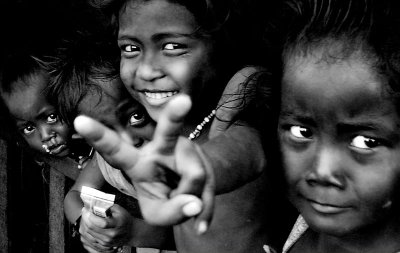 P E A C E
Tonle Sap, Cambodia
April 2006
They lived in a shanty around Tonle Sap lake.
They only knew one English phrase: “One dollar, please”.
I looked at their gestures and they seemed to signal two dollars instead.
My mind-set funneled my interpretation towards the materialistic nature of man.
I couldn’t take a good picture unless I changed my way of thinking.
I stepped back and saw a different sign: PEACE!
With a smile on my face, I pored over my backpack and took 2 dollars,
a pack of chocolates and some pens
and peacefully handed them over to their waiting hands. 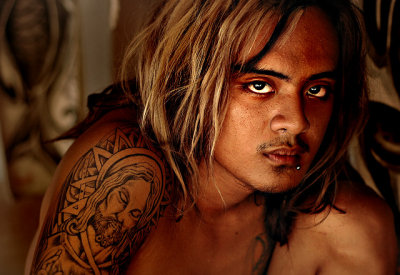 T A T T O O
Boracay, Philippines
April 2005
I remember his name is Ralph,
a tattoo artist.
Apart from these, I don’t know anything more about him.
It is not necessary.
His intense stare left an indelible mark in my memory
just as his tattoos were permanently etched in his skin.
Some pictures create a lasting impact to the photographer.
For me, this is one of them.
Third Place: Colored Portrait Challenge
www.dpchallenge.com 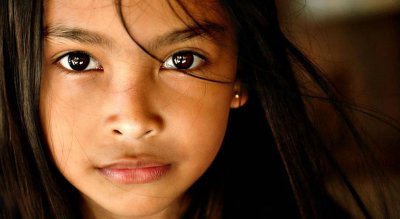 S M I L E
Boracay Island
Philippines
The smile in her eyes was more arresting than the smile in her lips.
A daughter of a Boracay artist,
I first photographed Lorelei in 2003 when I spent my holidays in Boracay.
I didn’t know her then.
Neither did I know her family.
When I came back in 2005,
I headed straight to their shop and re-introduced myself.
And I saw her again. Now, a lot of people know Lorelei.

This picture has appeared in two international publications.
I am looking forward to 2007 when hopefully,
I can photograph her again.