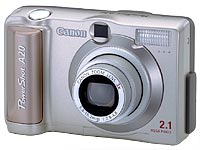 Well--after selling the high-end Nikon 5700 in Feb 2005 to get our Ford Tempo (we do have another 5700 lined-up when we can pay for it), we only had the D-SLR. (I know, cue the sarcastic violins.) I STILL like using an "everyday" camera for "everyday" photos, and saving the D-SLRs for 'serious' stuff. When I just want to click "fun-snaps" like anyone else I feel the need for a camera not meant for "serious" photography attempts. Using a "serious" camera for everyday snaps--it feels like overkill, plus since it's capable of 1st class results I feel pressured to produce them, in ANY situtation. No such pressures exist when I'm using an "everyday" camera like this.

However, after using it a month in combo with the D-SLR, I realized (much as my wife had been saying) that if you happen to snap something with this & it unexpectedly turns out to be really good, you'll regret shooting it at only 2MP--plus, the A20 is kind of largish for a "snapshooting" camera. So we're giving it to a 13-yr old daughter of a friend of ours (Amber, in the photos) and upgrading to the Canon Powershot S50--which has 5 megapixels in case something turns out good & the S50 is capable of "serious" attempts but isn't intimidating in that way--and is just as small as the A20 is.