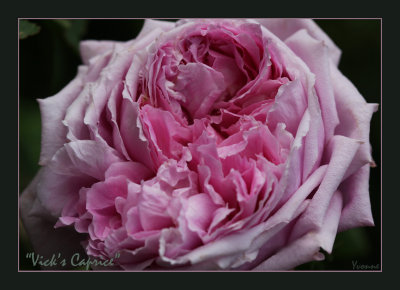 "Vick's Caprice"
These large fragrant blooms are often striped white and carmine and are cupped... a
sport of "Archiduchesse Elisabeth D'Autriche" from 1891, U.S.A. 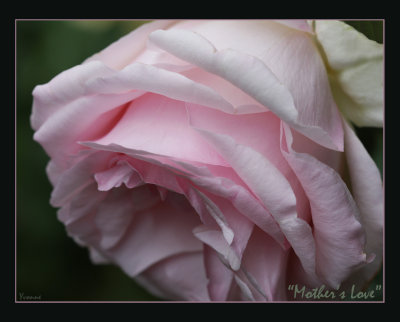 "Mother's Love"
Yet another pink rose... average height with a lovely sweet fragrance,
and the very first photo taken with my new macro lens! 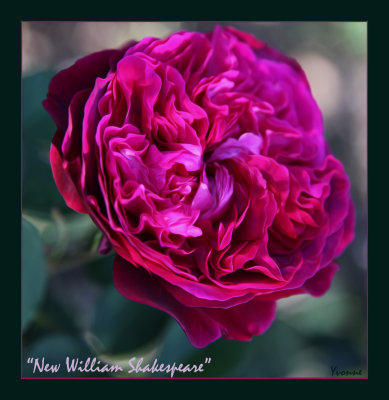 "New William Shakespeare"
We did have the original William Shakespeare growing but it didn't last very
long in our garden, it has now been replaced by this "New" William Shakespeare
with a slight difference in colour from the original (which I rather preferred).
My New version has taken quite a few years to perform and this year we had
good rains in early spring, I think my rose is going to take off at last!
According to my notes on this rose, the blooms form in small clusters and have
a strong rose fragrance - I forgot to check the scent when I took this photo!
My new macro lens arrived today, but I can't get the lens cap off, how annoying! 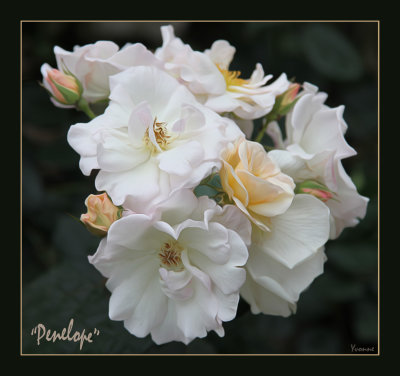 'Penelope"
An earlier English rose from 1924, that is good for growing over fences and walls
continuously in bloom and the hips follow. Sweetly scented blooms grow in trusses. 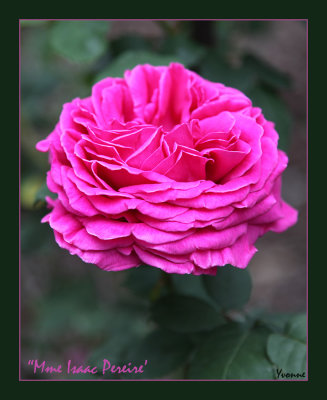 "Mme Isaac Pereire"
Another bright pink bloom from the past... named after a member of a banking family
during the reign of Napoleon III. This one is a very fragrant climber that
sends out clusters of blooms along the canes, so I have hung it into a neighbouring
Austin rose called "Dapple Dawn" a large single soft pink with a white centre and
golden stamens, similar in appearance to a clematis. DD is quite a large upright
and spreading shrub rose which can handle having a climber attaching itself to
some robust canes. Yolande from yesterday is alongside and is slightly smaller
and a softer pink than Mme IP.
My new replacement macro lens is on its way and soon I'll be using it for close work on roses
that are in season right now. 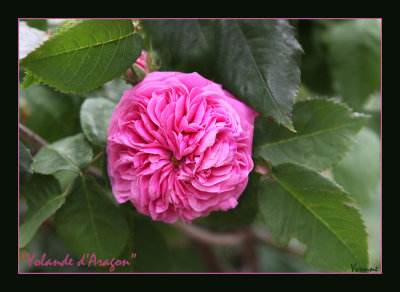 "Yolande d'Aragon'
This is a very tall and spreading shrub rose needing space, it towers
over many other rose bushes providing plenty of fragrant blooms which have now
begun. Named after the wife of Louis II of Anjou and the Two Sicilies
dating from 1843. 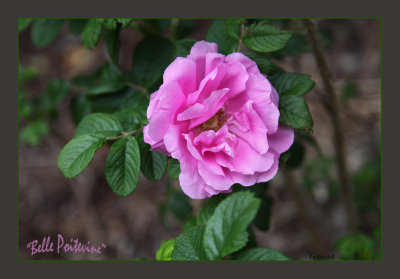 "Belle Poitevine"
A modern shrub, a rugosa hybrid with long pointed buds opening to an almost flat
large fragrant bloom. This one is new in my rose garden and I haven't taken many
photos yet. It is a large shrub and a good subject for a big hedge. The
name translates as "Beauty of Poitou" the region where the French raiser had his nursery.
Dating from 1894. My intention was to replace "Maxima" who unfortunately
recently died. 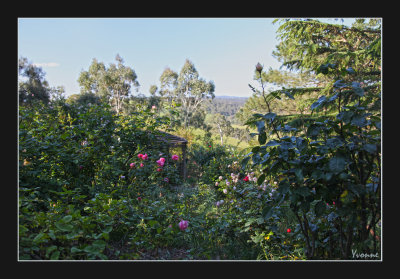 Garden scene
Since I took this photo a lot more roses have opened up, I think nearly every
rose bush has at least one bloom now, some have trillions (!) out, quite
eye stopping already... A pity the guests we had last Sunday couldn't come
this following Sunday, such a change in a matter of days! 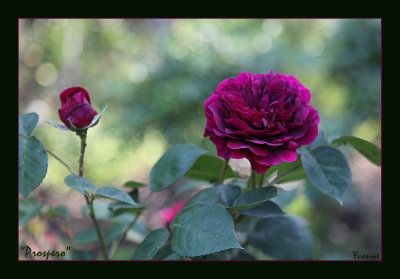 "Prospero"
An English bred rose by D. Austin in 1982, very popular in Australian gardens,
though I believe this one has been discontinued, replaced by later
creations; but this one does well in my garden, often one of the first
to bloom, the bush is neat and a good bordering rose with plenty of
blooms throughout the season. 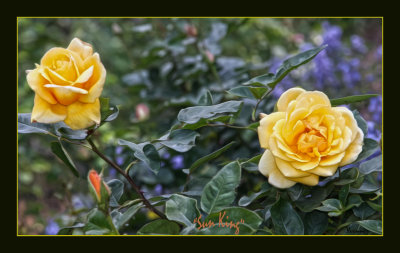 "Sun King"
Always one of the first to bloom... the buds are really pretty with touches of
orange, but they open up to a plain golden yellow.
I have ordered the 100mm f/2.8 lens 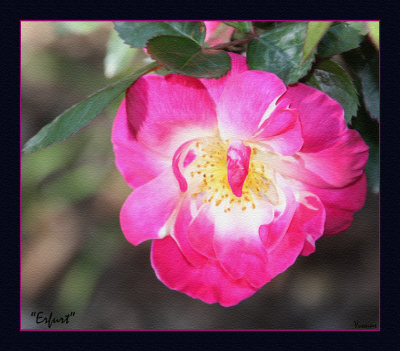 "Erfurt"
A modern shrub rose with a trailing bushy growth habit. Flowering is
continuous despite a large crop of medium sized hips that turn
from green to orange-red and are produced after the first flush of flowers.
Bred in Germany by Kordes in 1939. The colour is more intense in the cool
weather but fades with age during our hot summers to a paler pink. 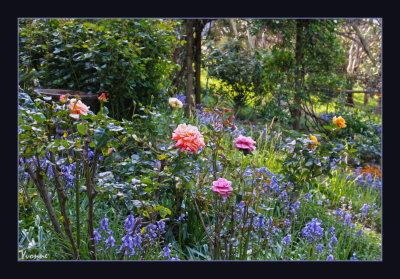 Bluebells and Roses
You can see Chicago Peace, Shocking Blue and Sun King, but every day there are
more roses opening and we're in for a rise in temperature and that will help
bring them on.
click on thumbnails for full image