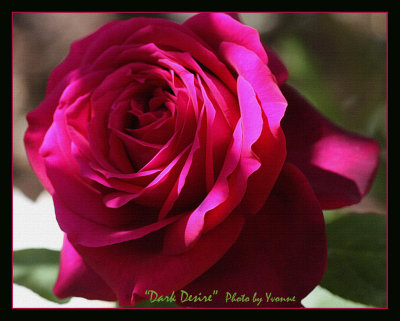 "Dark Desire"
One of my new additions to the rose garden, it was on the cover of my
favourite nursery's catalogue and I was very taken with it, and
the perfume really is to die for like the description said.
Bred in Germany by Kordes, their roses grow well in our climate.
I'll be able to tell you more in a couple of years time. 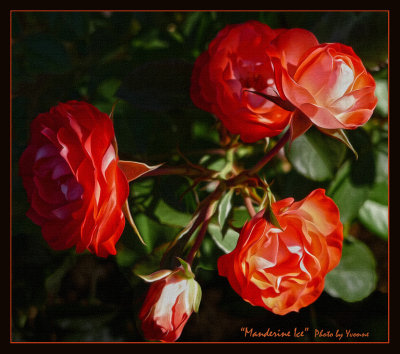 "Manderine Ice"
I didn't plant this one in my garden, it was a freebie from the nursery when they got
my rose order this year. It now resides in our 2nd daughter's garden, she grows a
few roses in her front yard. This one she planted next to a rose called either
"Hot Chocolate" or "Hot Cocoa", whichever one it is, this new little rose is quite complementary.
The flowers themselves are quite tiny, but born in profusion, and the rose has won a
lot of prizes including the Golden Rose of the Hague. 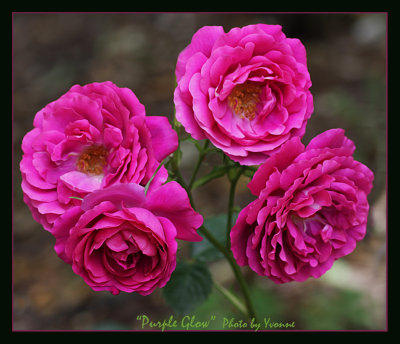 "Purple Glow"
One of the reasons for making this gallery was to include photos of the
new arrivals in my rose garden, and here is one that has given me some
problems trying to get the colour just right...it all depended on getting
the right lighting, and at last I managed to do this with this image.
I can't tell you much about the rose yet apart from it being from
Kordes a German breeder, these are the first blooms. 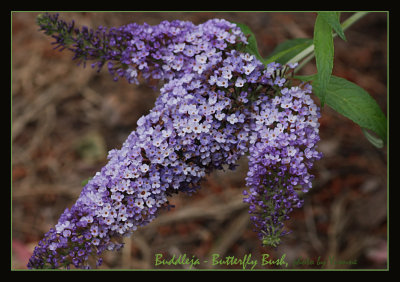 Buddleja davidii
Butterfly bush or summer lilac. An evergreen in our climate
and lovely among the rose colours, making a nice contrast.
We grew one but lost it quite a few years ago, this is our
second try at growing a Buddleja, hopefully successfully this time. 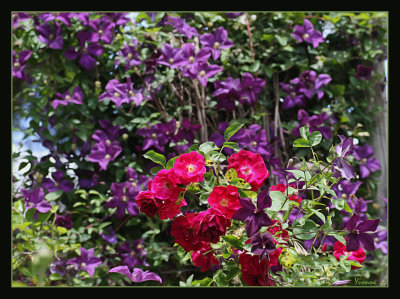 Roses & Clematis
I don't know the name of these roses, they are from understock that came
with an ancient rose (Ispahan), but I rather like them, so it stays in situ with the
background of a clematis that is really liking our cooler spring this year.
I have already featured the clematis, you can find it somewhere on this
particular gallery. Its a clematis that suits our climate. 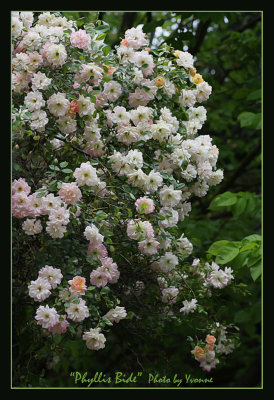 "Phyllis Bide" a rambling rose
Throughout our late spring this well behaved rambler will repeatedly produce clusters of
small, semi-double flowers that are yellow with a salmon-pink flush. These gradually fade
to cream as they mature and have a good scent. The soft colouring of the flowers would make
them a very pretty addition to a cottage garden, where they would look great
clambering over arches or doorways. A delight to see in full bloom! Mine is over
an arbour where we hang flower baskets. 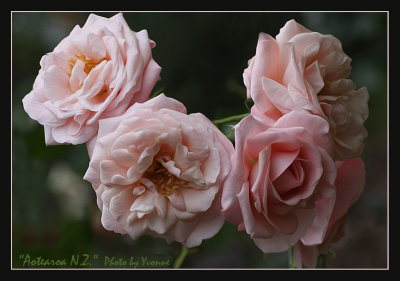 "Aotearoa N.Z."
Aotearoa means 'Land of the Long White Cloud,' the Maori name for New Zealand.
Named to commemorate the 150th anniversary of New Zealand, but bred in Germany
by the famous Kordes group. This year my rose has performed better than before
and I put that down to the wonderful rains and long winter. 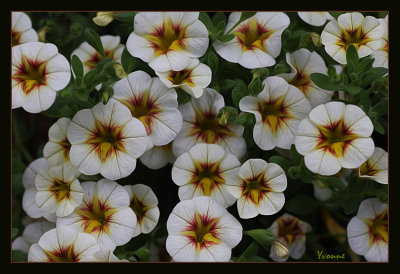 Calibrachoa in a pot
This display resides on an outdoor table in the gazebo fitting in with many
similar coloured roses in that part of the rose garden. 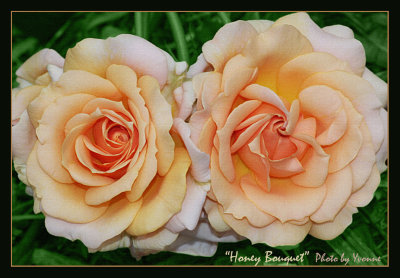 "Honey Bouquet"
A floribunda rose with a strong sweet perfume, is fairly new in my garden
having been planted about 7 years ago now. This year it has enjoyed
extra rainfall and has responded with a lot of new growth and buds. Its
one of the last to come into bloom in our spring. 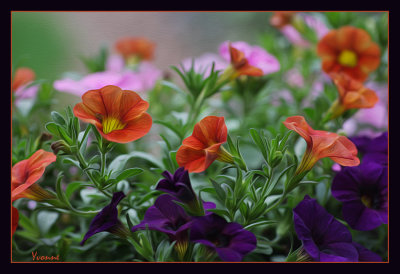 Calibrachoa "Fireworks"
Something new for me, I only acquired them recently, and they're in
baskets hanging from railings on our side balcony, we can see them
without going outside. They are replacing some Kalanchoe that were
starting to look a bit jaded. 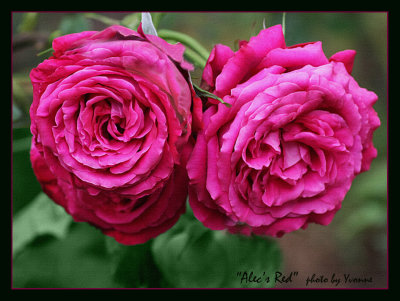 "Alec's Red" with Scottish connection
Named after a Scottish rose grower who started breeding late in life,
this being his first big success; it is now grown worldwide. Lots of
petals and a lovely fragrance keeps this rose in the catalogues. 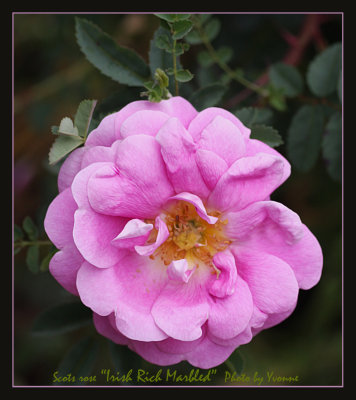 Scots rose "Irish Rich Marbled"
I remember reading in Susan Irvine's 2nd book about this rose and had to buy
a couple to include in my garden... placed it near the gazebo. A prickly little
bush with tiny ferny leaves and tiny black hips, it only flowers in mid spring
but in the autumn the leaves change colour making it a valuable addition. Mine
now share the spot with the modern release "Eyes For You" and they go well
together being of a similar sized bloom and complimentary colouring.
click on thumbnails for full image