One or two autumn roses may find their way into this gallery.
The rose garden in Spring 2015 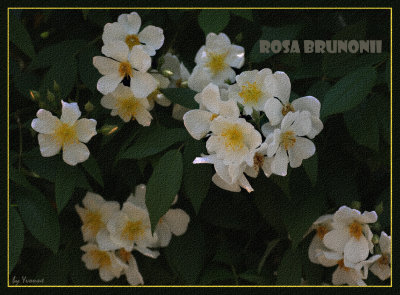 Starting with a series taken from the horse paddock looking back towards the rose garden.
Unusual and Unknown ROSES 2015-16 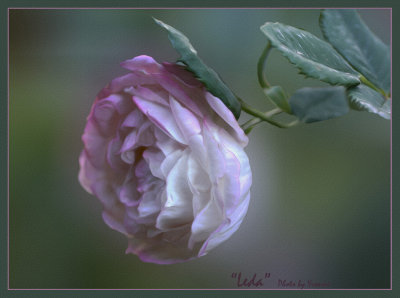 We have a handful of unusual and unknown roses that have been given or misnamed roses we have bought beginning with one given to us to grow that was saved from a demolition site and has taken a few years to settle in and start flowering. 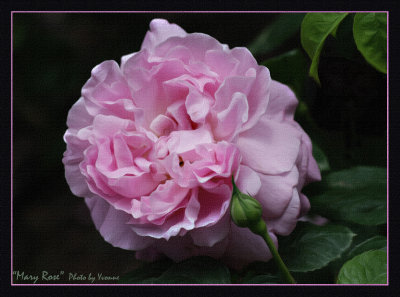 "Mary Rose"
A favourite of the David Austin family of roses, a delicate beauty.
A modern shrub rose with a slight fragrance; unfortunately the petals
shatter so is no good for picking, but nice as a garden rose because
it self dead-heads and saves the gardener a job.
Named after the flagship of Henry VIII which was raised from the Solent River 400 years after it sank.
Rose bred in the U.K., released in 1983 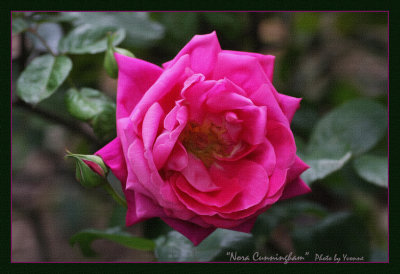 "Nora Cunningham"
This one is a climber, but I have been training it as a shrub rose, and so far it
is working okay. The rose is quite spectacular and can be seen from our
dining room window when in bloom. I tried to find something about Nora Cunningham
and how she managed to have a rose named after her... it seems she was friends
with the famous Australian rose breeder Alister Clark - the one who is known
for his "Lorraine Lee" rose.
'Nora Cunningham' 1920, Hybrid Gigantea. Nora Cuningham
(surname correctly spelt with one en) knew the Clarks very well
as a young woman. The rose was named for her in 1920 when
she married Les Austin, a Western District farmer." 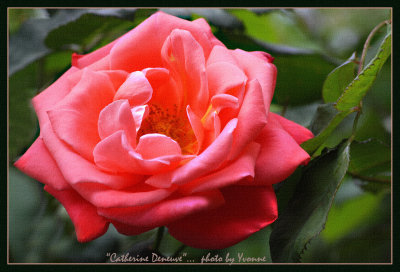 "Catherine Deneuve"
A worthwhile hybrid tea rose, a strong spreading thorny bush with singly produced fragrant blooms.
This rose always reminds me of my mother-in-law, now long gone, who wore a hat this colour
to our wedding over 54 years ago!
Bred in France and released in 1981 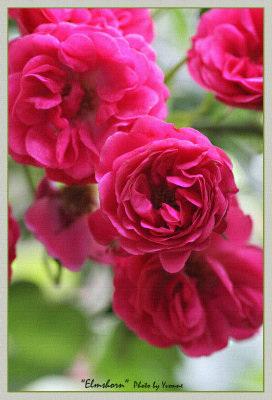 "Elmshorn"
A very large shrub rose, mine has grown like a tree - 3 metres wide and tall.
Very free flowering in large trusses and a slight scent.
Bred in Germany and released onto the market 1951 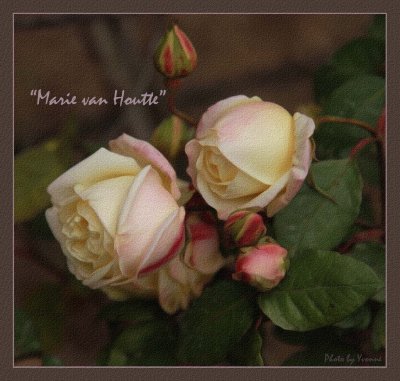 "Marie van Houtte"
This is a photo I found going through my archives and was actually taken back in
2011... but it looked just like this in spring 2015. A large sprawling shrub rose
needing space, but not that tall. The blooms vary in colour, sometimes more pink and
other times hardly any. Bred in France and released back in 1871. AKA a couple
of other names, e.c., 'Mlle Marie van Houtte' and 'The Gem' 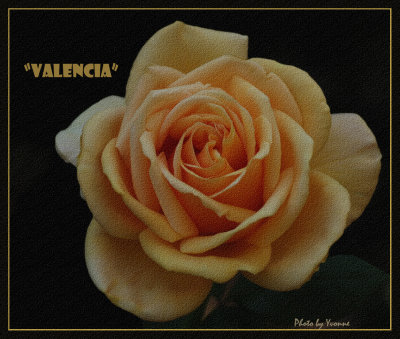 "Valencia"
A fairly large rose, this particular photo is of a partly opened bloom.
A sweet enduring fragrance, tall and fairly upright growing bush & a long season
of blooms.
Bred in Germany (German bred roses do well in our climate) released onto the market 1989 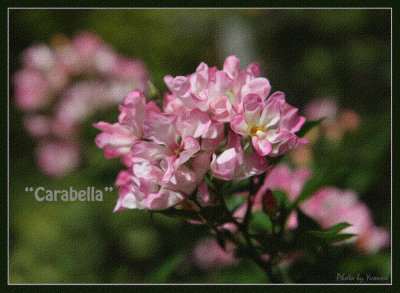 "Carabella"
Bred in Australia by Frank Riethmuller who lived in Sydney N.S.W.
He was born in Queensland 1885 and died in N.S.W. 1966. He enjoyed the outdoor life,
a lifestyle that was necessary for health reasons.
He was a bookkeeper and studied botany and foreign languages, both proving
useful in his role as an amateur rose breeder. He bred from a number
of German lines, in particular Kordes who marketed his rose 'Titian'.
"Carabella" is quite a tall upright grower, and can be grown on a pillar.
The foliage is light green and there are few prickles. 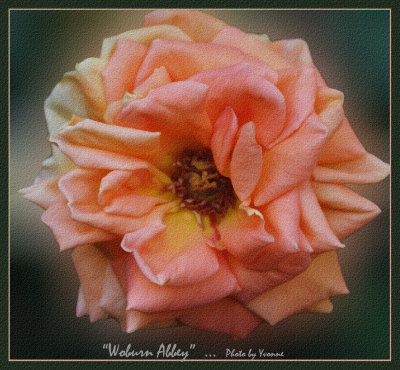 "Woburn Abbey"
Quite a small bush rose with plenty of clusters of blooms throughout the
rose season. Named for the stately home of the Dukes of Bedford.
Bred in the U.K., and released in 1962 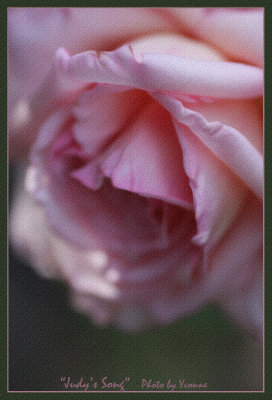 "Judy's Song"
Chosen for the singer Judith Durham from "The Seekers", a lovely rose
very quick to repeat and scented on almost thornless stems.
Bred in Australia and released in 2003 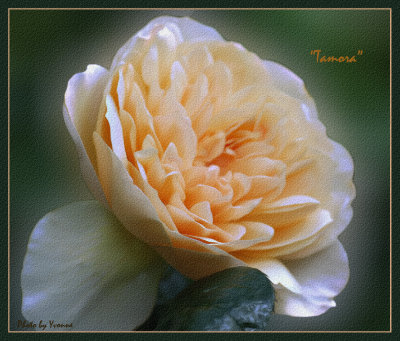 "Tamora"
A very popular rose here in Australia... a low rather twiggy & prickly bush rose
not that tall, needs to be near the front row to be appreciated. Bred in the U.K.
and released in 1983
click on thumbnails for full image