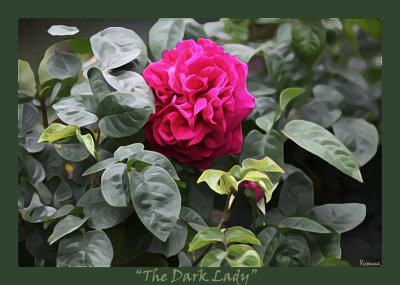 "The Dark Lady"
Bred by David Austin, UK, and one of the earliest crosses in 1991 of ‘Mary Rose’ x ‘Prospero’ it has qualities from both parents. The plant is upright, bushy and free flowering with medium sized, dark green foliage and lots of prickles.
The Dark Lady has a unique perfume which is very evident when the weather is warm and humid – many people say it has no fragrance at all so this rose must be enjoyed during warmer weather when it reveals a lovely fragrance.
(notes from David Austin's webpage)
One of my favourites in the rose garden, is a picture when in full bloom.
At first the shrub tended to sprawl, but with help from me, corrected this
fault quite early in its growth. The light coloured leaves belong to
another rose that is alongside TDL in that particular bed of roses.
A very difficult rose to get the colour just right, but I think I cracked it here. 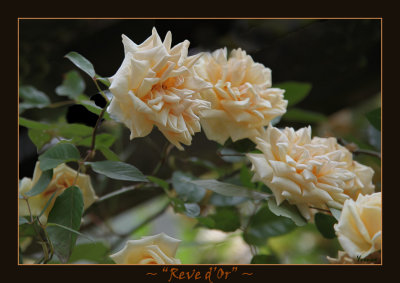 "Reve d'Or"
French for "dream of gold", this lovely, graceful climber lives up to its name with ease.
It is especially recommended for use on porch pillars, where the pendulous, globular flowers can be seen and appreciated more easily.
Once trained up and established ‘Ręve d’Or’ will display for its admirers a wealth of large, loosely double, buff yellow roses with a rich Noisette perfume.
It blooms all season, and we enjoy its autumn performance as well as in Spring.
Mine clambers over the roof of my gazebo and we can see the blooms from our
dining room window on the days the weather isn't nice enough to walk down the path.
Bred in France, and released onto the market in 1869 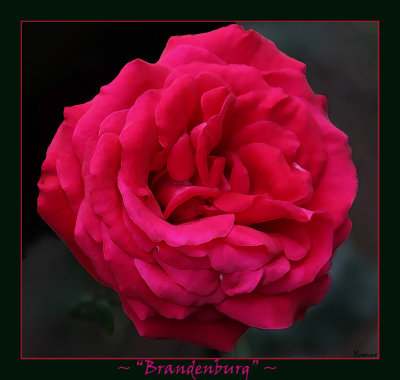 "Brandenburg" the Rose
A taller than average, upright grower with mildly fragrant roses.
I saved this one especially for "Valentine"s Day"
It was bred in Germany by Kordes, released onto the market 1965
the year our third daughter was born. I was given this rose to
trial in my garden many years ago. All Kordes roses do well in our
climate and this rose is no exception. 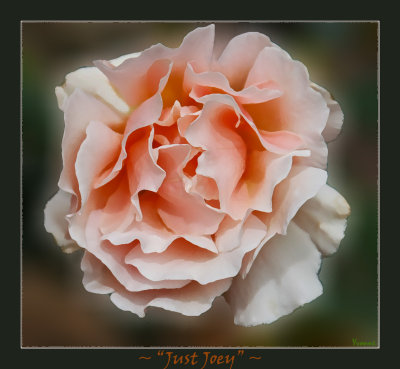 "Just Joey"
A very popular rose in Australia... I'm sure everyone knows this rose!
I want to thank everyone for the best wishes for my 80th birthday, which is
today - the 12th - we had a wonderful celebration yesterday, and today we
had lunch down in the Southern Vales winery growing area with our son and husband
so special to have them here from America for this celebration! Perfect
weather, considering it is February, the month when we normally have extremely
hot days, a huge fire risk in the area we live and throughout the entire
state of South Australia. Thanks again - Von. 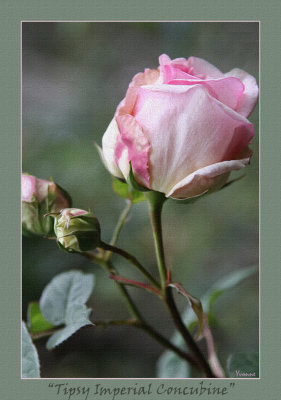 "Tipsy Imperial Concubine"
Tipsy Imperial Concubine was re-introduced by Hazel le Rougetel in 1982.
This rose comes directly from China and is presumably an older variety. Info.'Helpmefindroses'
The large flowers are rose-colored shaded with yellow and red... Modern Roses 12 has the year of re-introduction as 1989.
We featured this rose in the book "Naming The Rose" author, Roger Mann and I supplied most of the photos for this edition.
A photo by me can be found on p198 and the story on p199 by Roger. A gallery which includes the photo can be found if you
scroll the index page "ROSES"(page.2.) 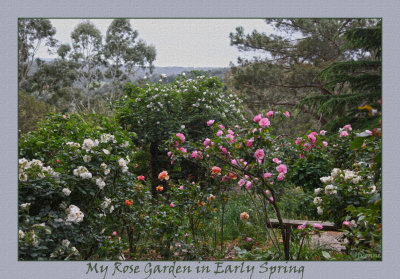 My Garden in Early Spring
From left to right, Penelope, Bettina, Just Joey, Cicele Lascelles & Gruss an Aachen, and
on the archway behind is New Dawn. You can see a primitive seat made from
a railway sleeper by Dick. 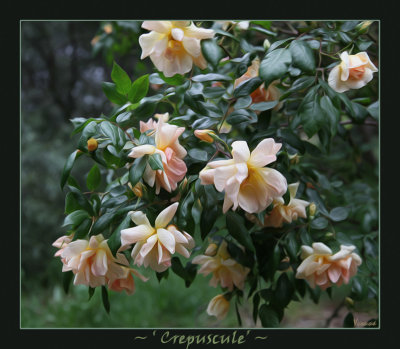 "Crepuscule"
A popular climbing rose in Australia, even though this rose has hardly any
thorns and needs to be supported from day one. Mine is a tree rose, on a tall
main stem where it cascades down from and towers over the nearby rose bushes.
It can be trained along a fenceline where it can provide a magnificent display.
The young leaves are tinged with bronze ageing to light green. The sweet fragrance
adds another dimension. Bred in France circa 1904. 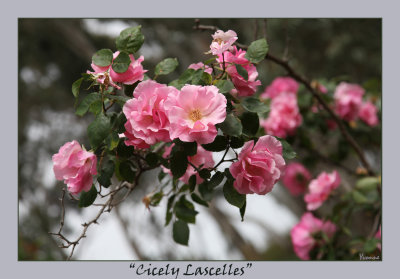 "Cicely Lascelles"
An Australian bred rose by Alister Clark (1864-1949) breeder of the well-known Lorraine Lee rose.
This particular rose was named after a golfing friend of his who also
enjoyed gardening with roses. One of the first roses to bloom each year in my garden,
it is a small climber, suited to growing against a wall, fence or pillar, though mine is
riding free amongst other shrubs and bushes. 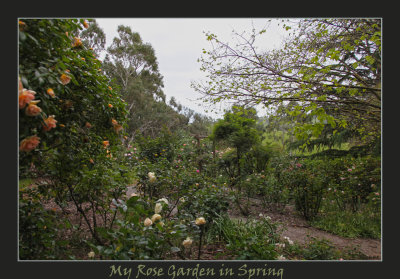 My garden in Spring
Photo taken a couple of months ago to remind our northern hemisphere people
what early spring down under was like.
No chance for comments tonight... our son has arrived home for a short stay
and another old friend had his 80th birthday celebrations during the day. 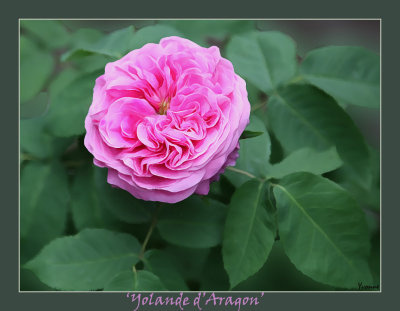 "Yolande d'Aragon"
This is a magnificent shrub, rather large, shaped like a huge umbrella with
canes hanging down and clusters of fragrant blooms at the ends of each cane.
Yolande was the wife of Louis II of Anjou and the two Sicilies.
Bred in France 1843 and seems to be still in the catalogues of rose nurseries. 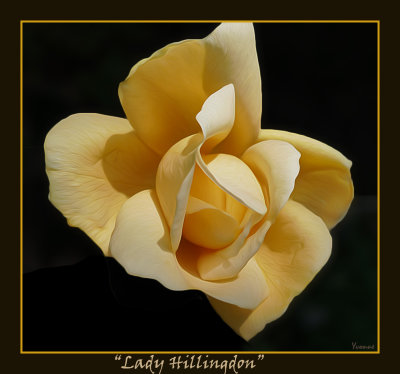 "Lady Hillingdon"
An oldie, mine is a climber.. the old tea rose is popular,
very few prickles and a strong tea fragrance.
A very healthy rose that is lovely in a vase.
From the UK originally in 1910, the climber is from the USA in 1917. 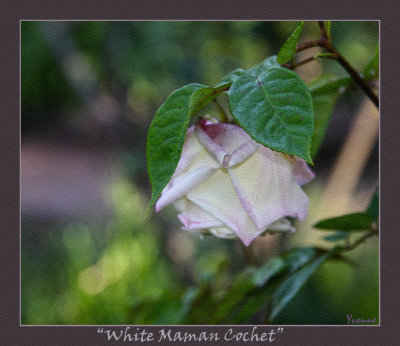 "White Maman Cochet"
A lovely old tea rose. A sprawling shrub rose and growing quite well in
our temperate climate. Discovered in the USA in 1896, a sport of "Maman Cochet"
I think this might be the first time that I've photographed this
particular rose. It is tricky because the blooms tend to hang down like an
overgrown fuchsia, as seen here.
click on thumbnails for full image