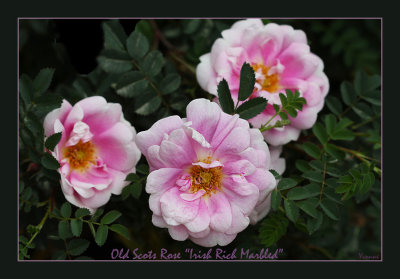 "Irish Rich Marbled" an old Scots rose.
According to my books, Scots roses were popular between 1790 and 1830 when there were several hundred in commerce...
It is a prickly litle shrub, reaching under a metre in height, the hips are round and black.
As it suckers freely, mine is a grafted variety because I bought mine at
a rose nursery. I have other Scots roses growing on their own roots, we do
have the space for them to spread. The scent is musky. 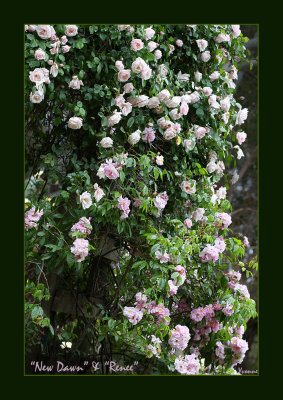 "New Dawn" and "Renae" cascading together.
These are roses that cover the archway into the original part of my
rose garden. "New Dawn" covers mostly the roof and sides, whereas
"Renae" grows up the side nearest the gazebo, so we get this lovely
view of them intertwining, and the colours match well, though the
shapes are different, I think they compliment each other rather well.
"New Dawn" has some vicious thorns, but "Renae" is almost thornless,
and I love the pretty leaves on "Renae" they are lovely even when
there are no roses in bloom. 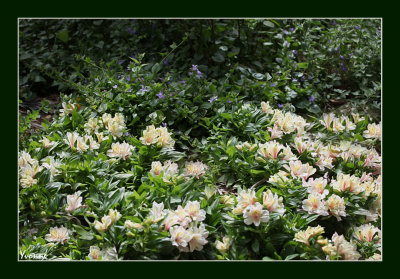 Alstroemeria and campanula carpeting the roses.
At the base of the roses along the main pathway is a carpet of creeping plants to keep
the roots of the roses cool during our late spring and summer months when temperatures
can climb. We are at present having days of mid-30s Celsius.. so you can imagine
how the soil dries out in a dry heat like we have. 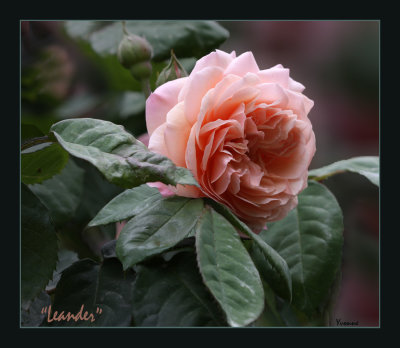 "Leander"
An "Austin" or English Rose that in my rose garden has grown into a small tree,
absolutely covered in these scented blooms in mid spring. After this big
display there isn't many to follow, where as a relation "Crown Princess Margarita"
growing alongside is just as large and blooms the whole season, albeit,
a golden yellow instead of this apricot you see here.
The white powdery coating is from a fungicide that has recently been applied. 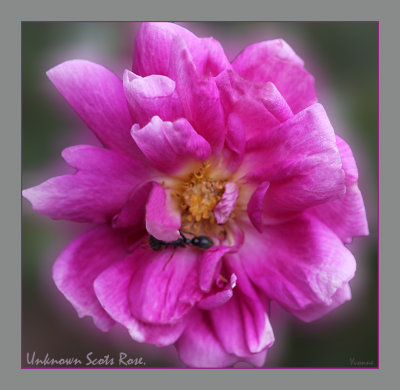 The Scots Rose without a name
This is the very first photo I've managed to get of this rose, other times I was
too early or too late and they were either not ready or had finished. This
cutting was given to me quite a few years ago when visiting a rose friend
in Sydney... he had no idea what it was, had been given it by his cousin.
Now we have a photo, and often these roses were just referred to as "double pink" from
such and such.. and looking in my book on Scots roses the nearest drawing I
have is for Rosa pimpinellifolia,/R. spinosissima 'Fulgens"from Kinnaird.
It is a pretty little thing, quite low growing and the plant is thickening up into a pleasantly
shaped little bush with a heap of these colourful little blooms. 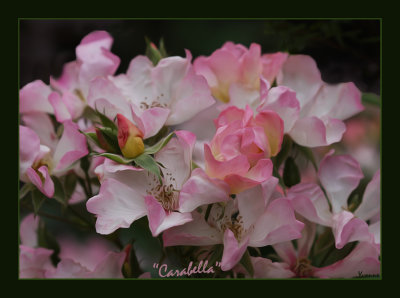 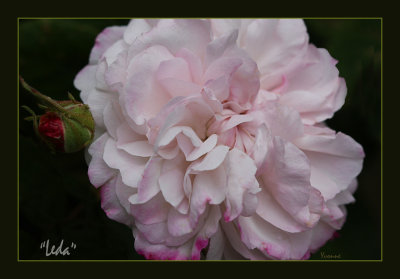 "Leda"
A delightful fragrant little rose is listed as a "Painted Damask". The bush has stayed quite
small in my rose garden.. named for the mythological queen who was seduced by Zeus when he appeared in the form of a swan.
Dated as pre-1827 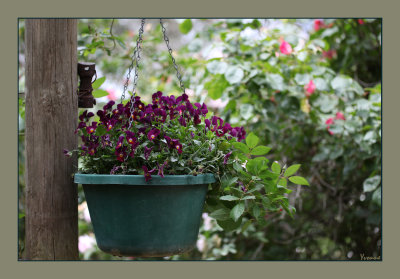 Hanging basket in the gazebo
Some violas liking all the sunshine in the gazebo, soon will be surrounded
by climbing roses when they begin blooming. 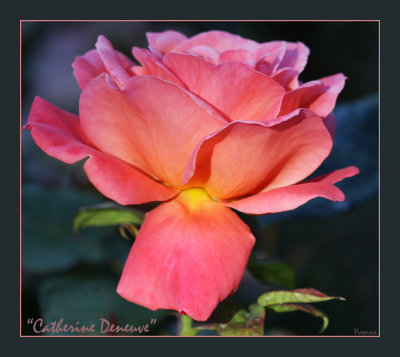 "Catherine Deneuve"
A strong spreading bush rose, buds produced mostly singly with a long pointed bud
fragrant and last well without fading, an advantage in our strong sunlight.
This was a favourite rose of Dick's mother, she loved the colour!
Bred in France in the year 1981. 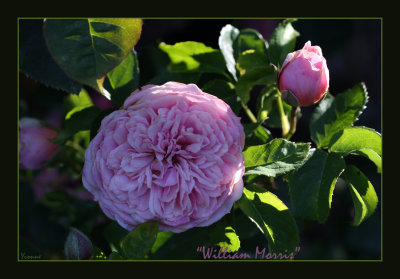 "William Morris"
Photo taken in the late afternoon sunlight of this small climber or tall arching
shrub that shares a spot with The Dark Lady, both roses by David Austin a well-known
English rose breeder. 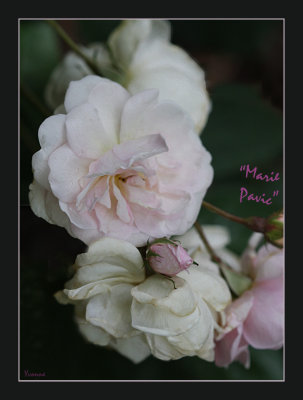 "Marie Pavic"
Or "Marie Pavie"... The flowers appear in small clusters a pale pink with a slightly deeper tint in the centre. A free flowering rose with blooms over a long season.
Suited for small gardens or low hedges, borders and small beds, looking particularly
nice in a mixed border. Dating from 1888, bred in France. 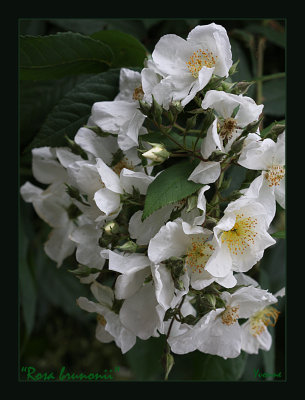 "Rosa brunonii" The Himalayan Musk.
We have 2 of these climbing a Himalayan Cedar tree and it has just started
blooming.. the scent will permeate our house once it is in full flight!
Found in the Himalayas circa 1823
click on thumbnails for full image