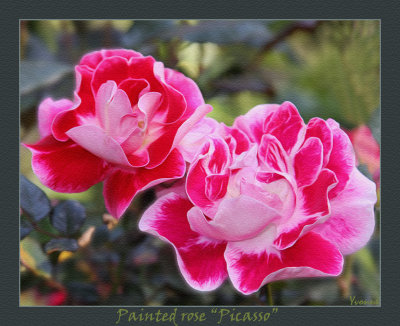 "Picasso"
The first of Sam McCredy's "Hand Painted" roses. I have often used this rose
for a Christmas Card, as it usually is always in flower that time of year.
The blooms last quite well on the bush and don't fade. A reliable garden
rose, I've never picked a vase full of them, one day I should give them a try!
My image of this rose also featured in Roger's book "Naming The Rose" 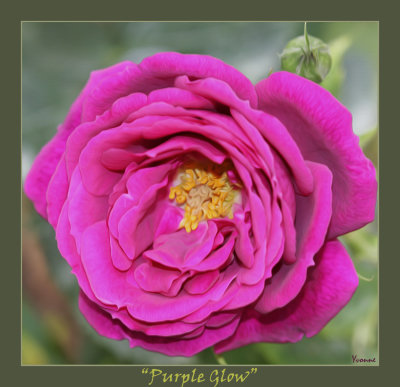 "Purple Glow" or "Weg der Sinne"
A new rose only planted last year. My plant hasn't grown much yet and hasn't
flowered much either. I took these photos back in November, still waiting for
our son-in-law to fix my computer... been a busy time for him.
I looked up the rose on the Kordes website, and this is the comment I found
there.. translated from the German.
"Very intensely colored shrublet with rich bloom, flowers abundantly again. Slight fragrance, even growth habit and high disease resistance.
A very special color which is really new in the assortment. Ideal for private gardens and public areas". 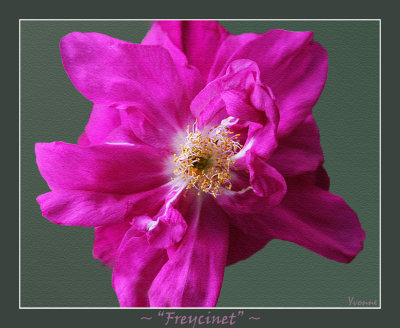 "Freycinet"
(Prorug-Rugosa 2010) This beautiful Tasmanian bred Rugosa rose produces fragrant purple double blooms opening to reveal yellow stamens,
ending with large red hips. It is hardy and disease resistant with dark green foliage. 2m tall. Bred by Lilia Weatherly (Australia, before 2010).Hybrid Rugosa.
Purple, yellow stamens. Strong fragrance. Double (17-25 petals) bloom form. There is a town in Tasmania
called Freycinet which may have been named after Rose de Freycinet, born Rose Pinon, was a Frenchwoman who, in the company of her husband, Louis de Freycinet,
sailed around the world between 1817 and 1820 on a French scientific expedition on a military ship, initially disguised as a man. 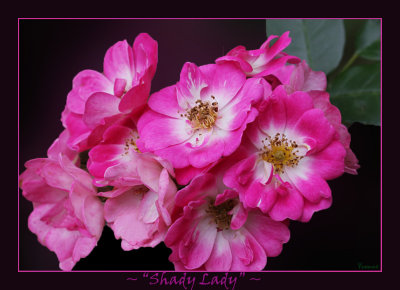 "Shady Lady"
We have 3 or 4 bushes of this rose, it is so colourful in flower, quite
eye catching, and rather easy to grow... here is some notes about the
use of this rose in an urban environment..
"Adelaide has over 40,000 roses growing in its public places, thriving in its hot, dry summers. These landscaping roses are specially bred to be resistant to disease
and pollution and easily maintained by the municipal authorities. Thickets of the roses form 'living fences' that are much more attractive than barbed wire.
The idea of landscaping with low-maintenance roses evolved in Paris in the late '70s - early '80s when it was decided that the city needed more colour in its streets.
The Meilland family of rose-breeders was asked to develop suitable roses and spent 10 years perfecting hardy, streetwise yet colourful roses".
Bred in France and released onto the market 1990, the year I started my rose garden. 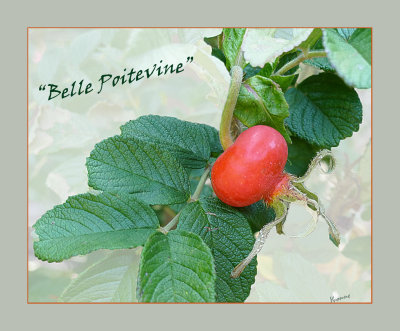 "Belle Poitevine" hip
A Rosa rugosa hybrid, and a rose that has only been in my garden for
a couple of years. I am amazed at the size of the hips, they're like
little tomatoes! Early days yet, but I think we're going to enjoy this
addition to the garden! Bred in France and released onto the market 1894
so been around for a while! 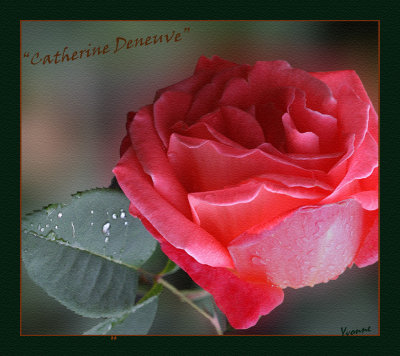 "Catherine Deneuve"
A strong spreading bush that is quite disease resistant.
The fragrant non-fading roses are produced right through the rose flowering season hence it
does get photographed
quite often by me, there is another photo of this rose on page 3
of this gallery. Bred in France and released onto the market 1981. 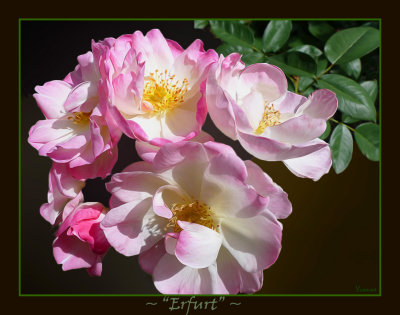 "Erfurt"
Another of the Kordes roses that thrive in our climate. This one has a
trailing habit with rich bronze-tinted disease free foliage.
Flowering is continuous and despite a large crop of mediums sized round hips that
turn from green to orange red, they can be used for indoor decoration
the hips lasting months on the bush. The modern shrub rose has been around for a long time
being released onto the German market back in 1939.
There is another photo of this rose on page 4 of this gallery that shows
the more intense colouring in the cooler weather.
35dC here in Adelaide S.A. today and forecast of 41 dC tomorrow... summer has arrived! 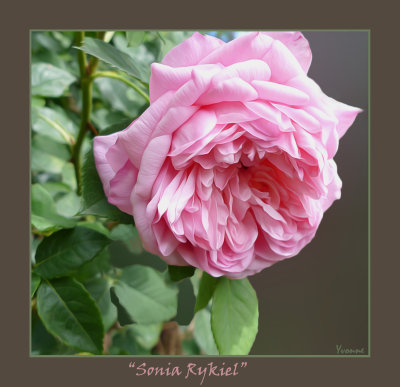 "Sonia Rykiel"
Introduced in France by Guillot/Roseraies Pierre Guillot in 1995 as 'Sonia Rykiel'.
Large heads of exquisitely perfumed blooms which are ideal for picking.
The bush has an open habit and new canes are constantly produced. The flowers are best picked early in the morning and hold their perfume for many days.
Spectacular when planted in a cluster of three or more bushes – but can be planted individually.
Named in honour of the famous French fashion designer, Sonia Rykiel.
The long canes make this rose an ideal pillar rose.
Height: 2m Spread: 1.2m
We had to include this rose, with a name so nearly like our eldest's daughter's name Sonja.
If you're wondering why I'm taking photos of roses with my Lumix, its because I'm having
some software problems with both of the canon cameras, and my source Mr. Fixit is hard
to track down this time of year. 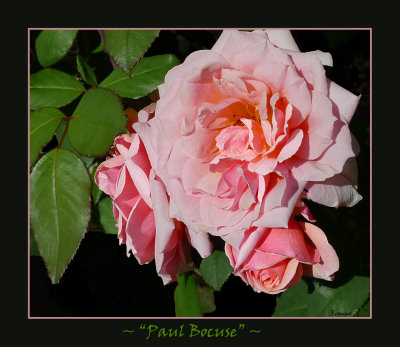 "Paul Bocuse"
Paul Bocuse is one of the Guillot Roses - a swirling mass of creamy-apricot blooms continually throughout the season on a very healthy,
well-rounded shrub make this rose ideal for planting in a group of no less than three plants spaced at 75cms apart for a most stunning display.
This one grows in our daughter's garden and seems to be in flower the whole
season. A lovely shaped bush with these gorgeous clusters of generously
sized blooms. Doesn't seem to be fazed by our extremely hot days. 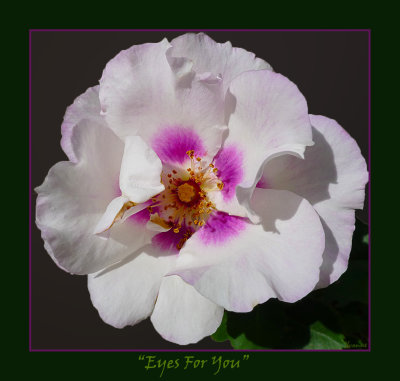 "Eyes For You"
On a beautiful day, blue skies, temperature and sunshine and a special rose
for you on your Christmas Day! It will be quite a few hours before I can
see and comment on photos... we are about to join the family for a celebration.
This is a very interesting rose and the result of cross breeding with "Hulthemia Perisca"
and reminiscent of an oriental poppy. The rose has so many blooms one can barely
see the leaves!
Quite a short grower, needs to be in the front row of the garden. 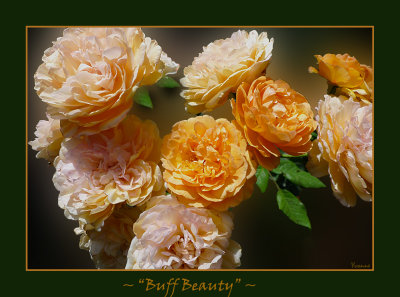 "Buff Beauty"
A rose I've rarely featured on Pbase, so here it is in full glory while we
have some cool summer days. A desirable garden item, a pleasantly shaped
shrub rose bred in the UK back in 1939, so an oldie by today's standards.
Pleasantly fragrant.
Unfortunately there aren't enough hours in a day to keep up with commenting
over this seasonal break - I promise to be back commenting in a couple of days
so hope you are all enjoying this time of year with family and friends like we
are! 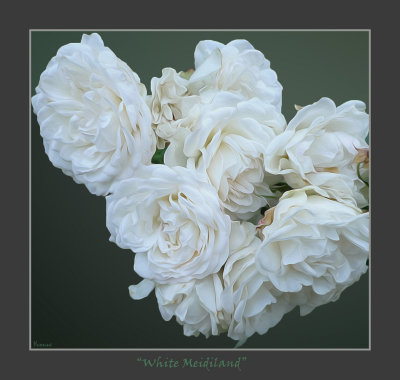 "White Meidiland"
Originally released as a Ground cover Rose, it is one of a series introduced for landscaping being largely disease free and easy care.
Mine is cascading down a cutting alongside some steps and is a very free
flowering rose that doesn't really need to be pruned.
click on thumbnails for full image