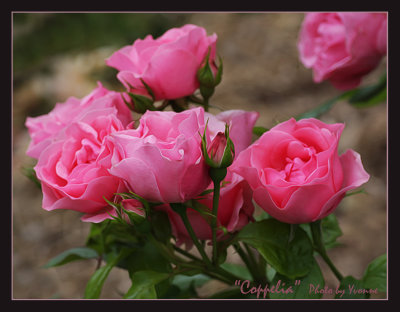 "Coppelia"
A tall upright shrub rose ideal for hedging - has been around since 1952
bred in France, heaps of flowers throughout the whole rose season. 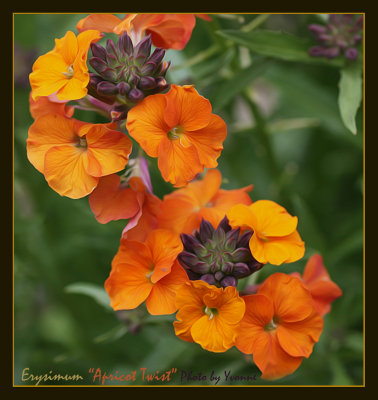 Wallflowers
We've replaced the rose "Ferdy" with a new group of roses and while we wait for
them to fill out and take the place of Ferdy, I've planted 3 wallflowers
and they're making quite a big splash of colour near the gazebo. 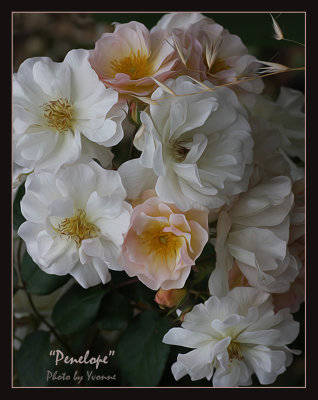 "Penelope"
A lovely old rose that is really performing this spring, I think she enjoyed our
very wet October. Suitable for growing over fences or walls or grown as a hedge.
Sweetly fragrant she grows large arching canes. Mine grows near the horse paddock
and we can see her from our window towering alongside "Iceberg" another tall & popular rose. 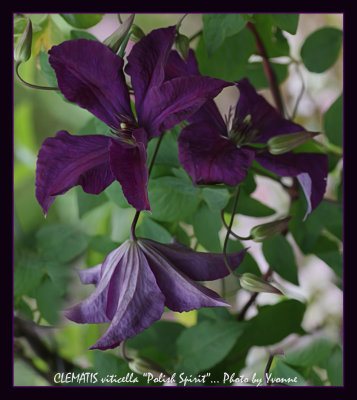 CLEMATIS viticella "Polish Spirit"
Growing on a tall lattice and sharing with nearby roses of pink and purple
These most recent 6 images grow in the same rose bed. 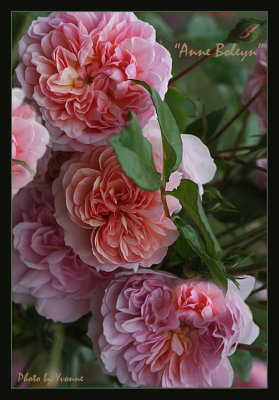 "Anne Boleyn"
A small shrub height wise, but it arches and takes up as much space as height with cascading
canes loaded with blooms.
It bears blooms in flushes and is quite quick to repeat if you
keep up to date with dead heading. For those who aren't au fait with
English history, the story follows...
King Henry VIII became interested in Anne while he was still married to Catherine.
When Anne became pregnant, she and Henry were secretly married, sometime around
St. Paul's Day (25 January) 1533 and Henry's marriage to Catherine ended in May.
On 1 June, Anne Boleyn was crowned Queen of England. On 7 September, her daughter,
Princess Elizabeth was born.
One of my collection of Austin roses. 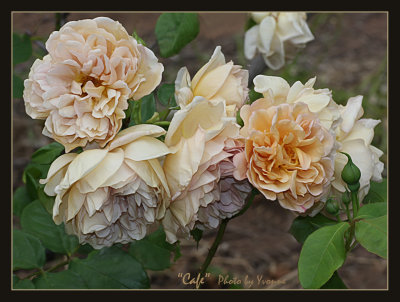 "Cafe"
An unusually coloured rose, and not so easy to grow being quite fussy with
weather... it will keep in the vase if picked when freshly opened. Breeding
is good coming from the Kordes nursery in Germany. Kordes roses seem to
like our climate in southern Australia.
I quite like the colour, it makes a nice contrast in a bed of mainly
pinks mauves and deep crimson. 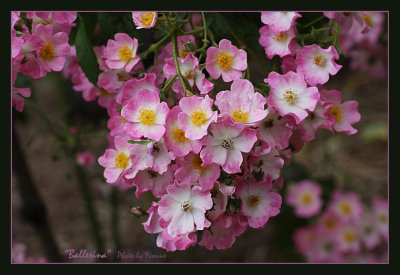 "Ballerina"
The rose's version of a hydrangea when in full flush; comes out later than
many of my other roses, but there it is in the back blocks of the rose
bed in full bloom. The bush is rounded and quite neat and can be used as
a hedge as it doesn't mind being pruned. 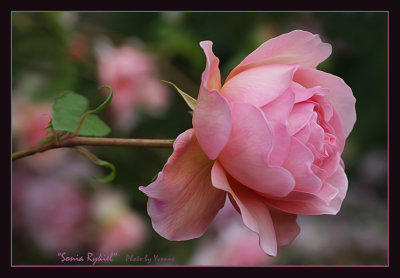 "Sonia Rykiel"
Old-fashioned styled rose of quartered bloom form, blooms in flushes throughout the season. 'Sonia Rykiel' has a
spreading and graceful habit. The blooms are a clear, warm pink,
and the fragrance is heavy old rose. They are generally borne in clusters of 2 or 3,
but many times singly. This is a really delightful rose to have in the garden or in the vase.
Named for the French fashion designer. 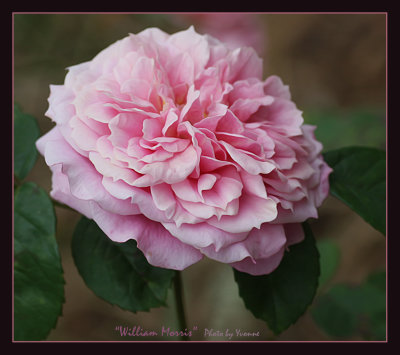 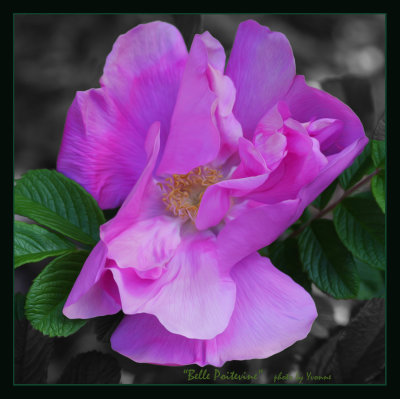 "Belle Poitevine"
A new rose in my garden and this is only the 2nd bloom so far. You can tell by
the leaves that this has rugosa breeding, but it does date back to 1894
and is named after the region where the French raiser had his nursery.
I can't tell you much about it yet except from what is written in a rose book that
lists it. It is supposed to grow into a large shrub over time, but that is okay
it replaces a very large shrub that died when a protecting tree blew over quite a
few years ago. 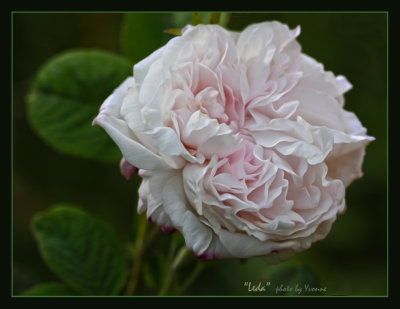 "Leda"
A "painted Damask" rose, pre-1827, I remember a Pbaser used to love this rose, but I don't
think she is still a member, a pity. We have lost quite a few members over the years, very sad.
The milky white petals are often tinged with a crimson edge. There is some repeat flowering
if the deadheads are removed.
It was named for the mythological queen who was seduced by Zeus when he appeared in the form of a swan.
My roses have suffered a little by storms that raged through yesterday evening, but no
real damage thankfully. 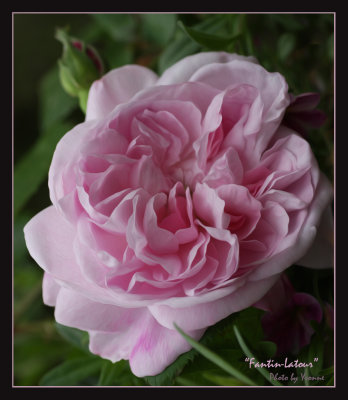 "Fantin-Latour"
The scent is intoxicating and the bush is almost thornless. Mine
meanders through the rose I featured yesterday. This one was named
after Henri Fantin-Latour (1836-1904), a famous French painter renowned
for still life and flowers, many of them Old Garden Roses.
click on thumbnails for full image