Driveway, Wildcat Hill, Carmel Highlands, California, 2012
When I visited the Carmel area, I searched for vestiges of one of my favorite photographers – Edward Weston – who lived, worked and died here more than 50 years ago. I had been reading his journals, and knew what to look for. I spoke to locals at both a photography gallery bearing his name and at the retail shopping building that was once the site of the studio where he made some of his most famous images, including iconic nudes and peppers. I photographed at nearby Point Lobos, where he made many of his most important landscapes. And I visited the site of his home on Wildcat Hill, now owned by a grandson. The modest house on the hill where Weston lived and died is now hidden in the trees covering the hill, but there is still a mailbox bearing his name, along with the entrance to a driveway, just off the public road. I made this photograph of that driveway and converted it to black and white, the medium Weston used to make his own images. A curtain of trees clings to the edge of the driveway, a virtual screen of privacy. The road curves away from these trees, rising towards the unknown. The focal point of the image is the small, hand lettered sign that simply says “Weston Private Driveway.” By using a 24mm wideangle focal length, I am able to move close enough to that sign to make it legible, yet also retain the curtain of old trees, most of them dating from Weston’s lifetime, as well as the curving roadway that carries the eye through the image.
0 comments leave a comment 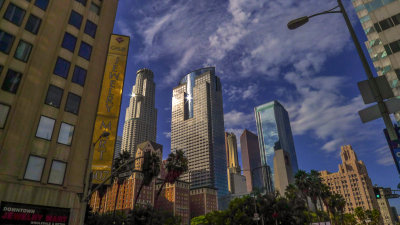 Cityscape, Downtown Los Angeles, California, 2012
The towers that soar over downtown Los Angeles are at their best late in the day. They rise here from the palm-lined street, reaching towards a rich blue sky streaked with delicate clouds. Two starbursts of light bounce off the highest of the structures, providing the focal point for the image. By using a 24mm wideangle lens to make this image, I am able to frame that skyline with the sign-bearing home of the California Jewelry Mart at left and the street light at right, which seems aimed at the highest of the buildings in the middle of the image.
2 comments leave a comment 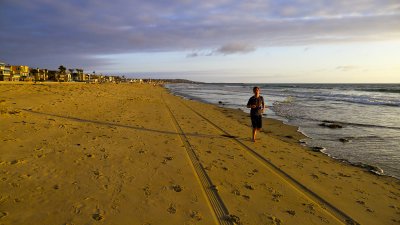 At water’s edge, Mission Beach, San Diego, California, 2010
The tracks of lifeguard trucks patrolling Mission Beach offer leading lines that seem to energize this lone runner sprinting along the water’s edge. Made with a 24mm wideangle lens, the image expands the flow of the tracks, the sand, and the overhead clouds, minimizing the scale of the beach houses in the background.
2 comments leave a comment 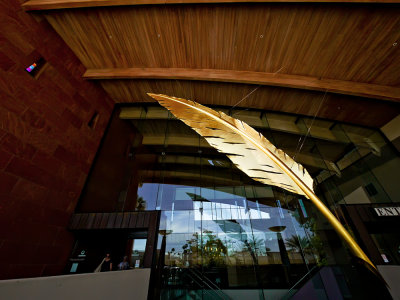 Library, Scottsdale Civic Center, Scottsdale, Arizona, 2009
An enormous golden quill pen hangs over the atrium of the Scottsdale public library. I moved outside the building to photograph it, backing up until my 14mm wideangle lens would include not only the pen but also the soaring ceiling that supports it. The quill pen appears twice -- once as itself, and again as a reflection in still another window behind it. I create scale incongruity with this lens by comparing the huge building with its enormous decoration to the tiny figures emerging from the door at lower left.
7 comments leave a comment 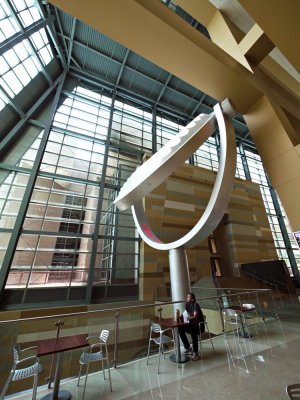 Convention Center, Phoenix, Arizona, 2009
The towering grand atrium entrance, shared by the Phoenix Convention Center and Symphony Hall, features a 40-foot tall sculpture in the form of a mirror, entitled “Art is guaranty of sanity,” by Louis Bourgeois. I photographed this man sitting below the mirror with a 14mm wideangle lens turned vertically. By using such a wide lens, I stress the size of the building by incongruously juxtaposing it with the lone figure. The lens is so wide, that it not only includes the huge sculpture, but lifts the eye all the way up to the ceiling as well.
1 comment leave a comment 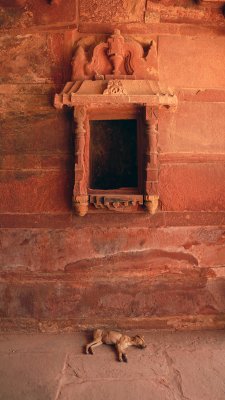 Dog day, Fatehpur Sikri, Indian, 2008
One of Emperor Akbar’s huge windows dwarfs the small dog sleeping below it. My 28mm wideangle lens, held vertically, allows me to come close enough to stress the textures and detail of the 16th century palace, yet still manage to include a dog seeking shade and rest on a brutally hot afternoon.
5 comments leave a comment 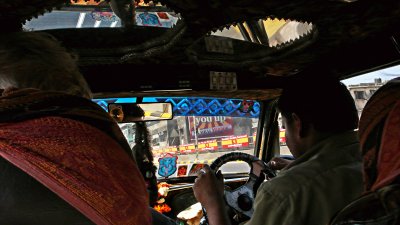 Taxi, Mumbai, India 2008
There are 60,000 taxis roaming the teeming streets of Mumbai. We rode in three of them during our brief one-day visit. (Two of the three drivers got lost.) The taxis are tiny, and uniquely Indian in décor. I made this picture with a 28mm wideangle lens from the backseat, and was able to embrace the driver, the back of the front seat, the windshield, and the mirrored ceiling that added so much character to the journey. This was the final image I made on my three-week journey through India in the early spring of 2008.
0 comments leave a comment 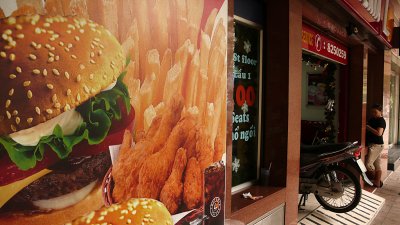 Commerce, Saigon, Vietnam, 2007
Not only have western products found success in Vietnam, but western advertising techniques have taken hold as well, particularly on the main shopping streets of Saigon. I observed this cross section of business in action on Saigon’s busy LeLoi Boulevard. I moved in within a foot or two of the large poster of the hamburger, fried chicken, and French Fries, making it the anchor of this shot by filling half of my 28mm wideangle frame. Yet the wideangle format still leaves me enough space to include part of another poster, a doorway with a motorbike parked within it, and finally someone standing in an ATM alcove. The beauty of wideangle photography is its inclusiveness and emphasis. However we must move in, not out, in order to take advantage of this resource. And when I say “move in,” I am talking about being a matter of only a few feet from the prime subject.
2 comments leave a comment 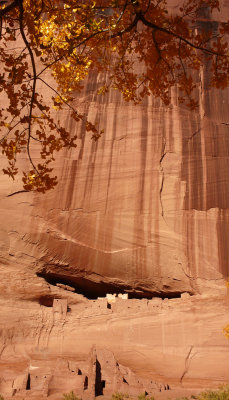 White House ruin in context, Canyon de Chelly, Arizona, 2007
The thousand foot high cliffs of Canyon de Chelly rise straight up from the canyon floor, overshadowing everything down below, including the ancient ruins known as The White House. The magic of a “cliff house” comes from its setting in a niche carved into the walls of a vast canyon. To give a sense of he sheer scale of this house’s setting, I used a 28mm wideangle lens here, embracing the old ruins at the site’s base for the sake of comparison. I fill in the top with leaves and branches. Their downward thrusts echo the downward thrust of the directional flow on the rock itself. By using a true wideangle format, I can get close enough to express the detail on both buildings and rocks, yet still express the nature of the Canyon itself – vast in scale, brilliant in color.
8 comments leave a comment 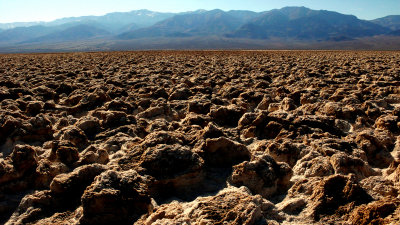 Devil’s Golf Course, Death Valley National Park, California, 2007
The floor of Death Valley is a vast evaporating dish covering 200 square miles. Here it is crusted with lumpy salt pinnacles, the residue of a lake that evaporated 2,000 years ago. In the summer, the ground temperature here approaches 200 degrees (F). The point of this picture is its vast flat scale. Only a wideangle lens can do justice to a subject this wide. Using a camera with a 28mm lens, I moved as close as I could to the salt pinnacles in the foreground without losing a sense of the vast place itself. This demonstrates a great strength of wideangle photography. A true wideangle lens of 24mm or 28mm will allow you to get as close as you want to the subject to stress detail, yet still retain enough sweeping content to provide an idea of scale.
14 comments leave a comment 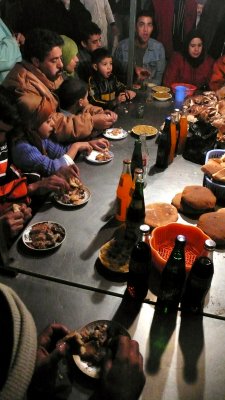 Dinner in the square, Place Jemaa el-Fna, Marrakesh, 2006
Inexpensive yet ample dinners are served by the thousands each evening in the Place Jemaa el-Fna. Locals, as well as tourists, throng to them. I used a 28mm wideangle lens held vertically to stretch the scene, anchoring the image with a pair of hands at the bottom, and allowing a twisting line of twelve soft drink bottles to draw the eye into and through the image. Meanwhile, a family of eight enjoys dinner around the perimeter.
6 comments leave a comment 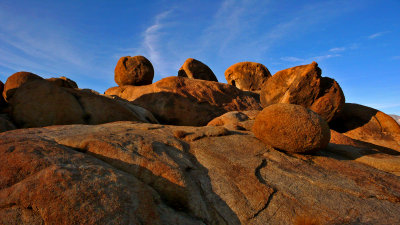 Boulders, Alabama Hills, Lone Pine, California, 2006
In this image, the sky plays a bigger role than usual because of the thin clouds radiating out from the group of massive boulders. The 28mm lens allows me to move in and stress the textures of the huge rock that anchors the image. The boulders incongruously lie upon its top like giant walnuts. The clouds and sky offer a third layer that completes the image. The warm evening light creates rich coloration in both rock and sky, celebrating the work of nature.
8 comments leave a comment