Gallery Twenty Seven: Bringing far to near with the telephoto lens 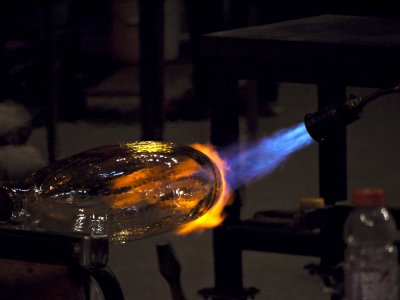 Hot glass, Museum of Glass, Tacoma, Washington, 2009
The essence of glass making is the application of heat. While photographing glassmakers at work in the Museum’s demonstration area, the Hot Shop, I noticed them working on a piece of glass with a blowtorch. I zoomed in on it with my longest focal length – 400mm. I had no other choice. The telephoto was the only tool for the task, since I was not allowed to go down on the floor of the demonstration gallery itself and even if I could, I would want to stay well away from the dangers of fire and hot glass. I made this image from the visitors gallery and was able to capture the yellow, and orange colors of the fire enveloping the piece of art glass under a blast of diagonal blue flame from the blowtorch.
You can watch the process yourself on live streaming video from the museum’s website at http://www.museumofglass.org/live-glassmaking/watch-the-hot-shop-live/
0 comments leave a comment 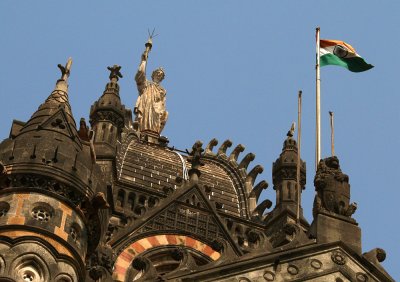 Victoria Terminus, Mumbai, India, 2008
The British built Victoria Terminus in 1888. Today it is the most impressive example of Victorian Gothic architecture in India. A statue of “Progress” crowns its colossal dome. I used a medium 140mm focal length to reach up and relate the statue to other elements on the roof of the terminal, including the Indian flag.
2 comments leave a comment 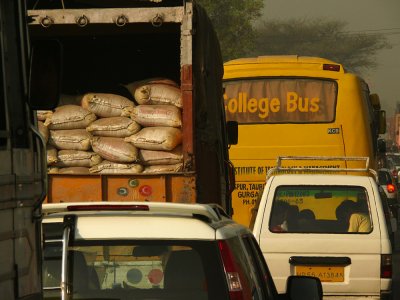 Gridlock on the Delhi-Jaipur highway, India, 2008
India's 1.13 billion people tax its highway system, particularly those leading out of Delhi, its capital city. India's highway system is relatively undeveloped for a country holding one sixth of the world's population. India will overtake China by 2030 to become the world's most populated country. I used a 350mm telephoto focal length, and shot through the front window of our tour bus. My lens acts as a telescope, compressing the space between the cars, truck and bus as if they were inches apart. I make the traffic jam seem even tighter than it really is.
0 comments leave a comment 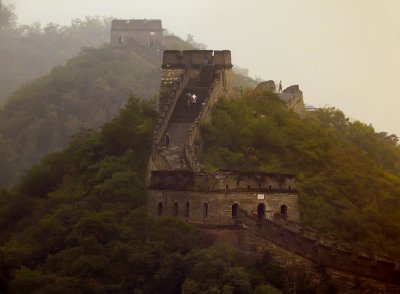 Experiencing The Great Wall, Mutianyu, China
This section of the Great Wall of China is at Mutianyu, a dramatic hilly setting 56 miles north of Beijing. It is a more relaxed section of the wall, with far fewer tourists and less intrusive vendors and self-appointed "guides" than I found at Simatai on my previous visit to the wall in 2004. (The most commercialized section of the wall is at Badaling, only 44 miles from Beijing.) I wanted to convey the relaxed, relatively un-crowded nature of the Great Wall at this place by including only about five people in this picture. It was a foggy, overcast day, and I wanted to express the mood of the weather as well. To do this, I extended my zoom lens to about 300mm and shoot into the mist. The long telephoto focal length flattens perspective, bringing the towers closer together. It also defines the fog by showing us the foreground clearly, yet greatly softening detail in the background.
2 comments leave a comment 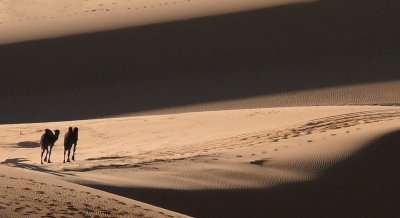 A mind of their own, Erg Chebbi, Sahara Desert, Morocco, 2006
A pair of camels has broken away from the herd, and set off on their own into the deeply shadowed dunes of the Sahara. It took awhile for the herd master to corral them. I used my longest telephoto focal length (750mm) to reach them, as well as to flatten the image and bring the dunes in front of then and behind them closer together. The image expresses both the power and majesty of the Sahara, as well as the independent nature of the camel.
4 comments leave a comment 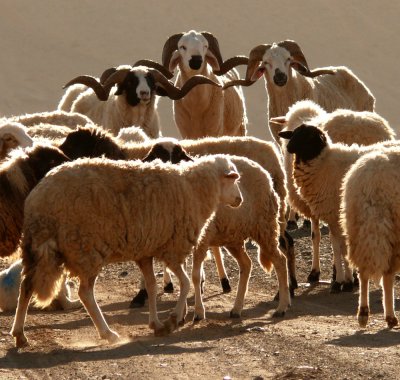 Ram alert, Sahara Desert, Morocco, 2006
There are many herds of sheep on the fringes of the Sahara. We stopped for one that filled the road before us. A alert group of rams with very large horns create a wall here to keep the other sheep in check. I also used a 750mm telephoto focal length to make this image – the rams were very far away, and I wanted to make them as big as possible. They were the subject of the picture and I needed detail to create the incongruous “wall of horns” that keep the rest of the sheep in line.
2 comments leave a comment 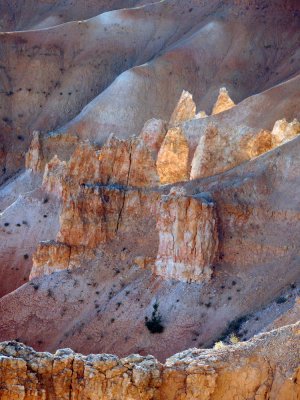 Reflections at sunset, Bryce Canyon, Utah, 2006
The wall at the base of this image is reflecting the light of a late afternoon back into the darkness of Bryce Canyon, softly illuminating the colorful hoodoos in a golden glow as no direct sunlight ever could. This scene was not very close to my camera position, and there was no way for me to move any closer. Except optically. I simply zoomed out to about 250mm to make this image, bringing up detail and rendering the color accurately and completely. Any smaller focal length would have included too many hoodoos, and diluted the meaning cast on the individual rock formations by the delicate, softly reflective light.
0 comments leave a comment 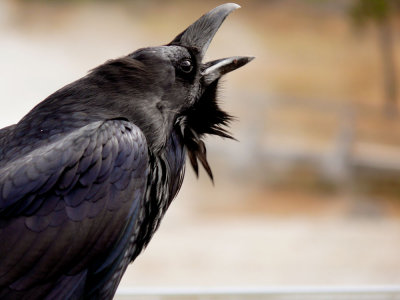 Raven, Hot Lake, Yellowstone National Park, Wyoming, 2006
Bird photography generally requires using telephoto lenses of 400mm and up. Birds often keep a good distance from humans, and are relatively small subjects to begin with. If we are to embrace a bird with our frame in order to show detail, we must use a focal length capable of doing just that. Ravens are large birds, but even a large bird is a small subject when it comes to stressing detail and expression. I used my zoom lens at 420mm to bring out the texture of this raven’s feathers, the catchlight in the eye, and the explosive thrust of a beak in full cry. I fill more than half the frame with my subject. This long focal length, when used on a subject that is relatively close, will also throw the background into soft focus, simplifying the image by removing all background clutter and distractions.
0 comments leave a comment 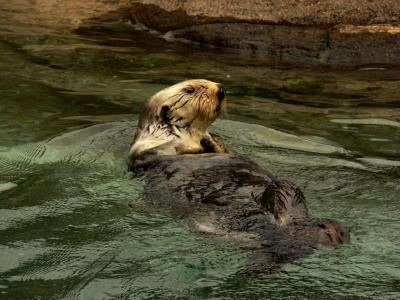 Sea Otter, Oregon Coast Aquarium, Newport, Oregon, 2006
Sea Otters are difficult to see in the wild. There is a delightful exhibit of otters at the aquarium in Newport, and they are often close enough to photograph, particularly with a telephoto lens. I used a 377mm telephoto focal length to make this shot. The reason telephotos are so essential is the small scale of the animal itself. The smaller the animal, the longer the lens must be if key detail is to come up. My long lens enables me to simplify my image, and stress the detail that will take this image beyond description and instead express ideas about this otter. The paws clasped to the chest, the serene expression on a face marked by trails of stylized tears, will tickle the imagination of all who will see this image. A long telephoto lens in the 300mm-500mm range is essential for photographing wildlife at a distance, enabling us to shoot without disturbing the animal, filling a large portion of frame with the subject and making key details visible. For more examples of wildlife photography using telephoto lenses, see my Safari Gallery at http://www.pbase.com/pnd1/safari
0 comments leave a comment 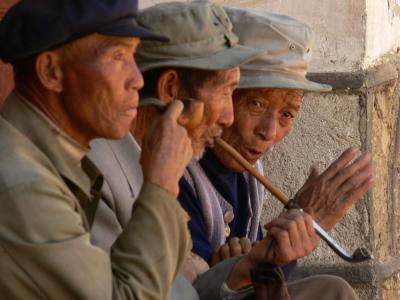 Sharing a smoke, Baisha, China, 2006
This trio of Naxi farmers share a leisurely chat and several pipes filled with local tobacco.
I used my telephoto lens at 350mm, focusing on the man doing the talking and softening the men doing the smoking. It is a study of faces and hands, gradually growing sharper and more emphatic as we move into image. One of the most important aspects of the telephoto as a tool for expression is its ability to selectively soften certain areas of a picture while keeping others sharp. If we want to focus selectively, we open up our lens to its largest aperture and then focus on whatever we wish to stress. The lens does the rest as it does for us here.
4 comments leave a comment 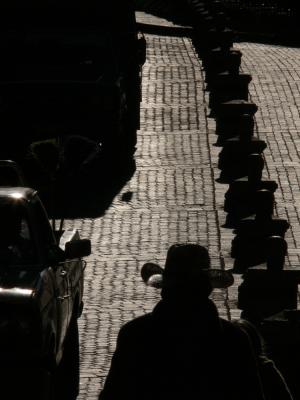 High Noon on Avenida Juarez, Guanajuato, Mexico, 2005
A long row of iron posts separate traffic from pedestrians who walk the bricks of this avenue. I use the full zoom reach of 420mm to compress that row of posts, making it seem as if each post was standing up against each other. Actually, the posts are spaced at least six to eight feet apart (you can see another photo of them showing this spacing by clicking on the thumbnail at the bottom. ) I wanted this image to contrast the silhouetted man in the wide brimmed hat to the posts stacked before him on one side, and to the silhouetted traffic jam arrayed before him on the other. The telephoto perspective collapses distance and merges foreground, middle ground and background together, pushing the man and the objects before him much closer together than they would appear to the eye. 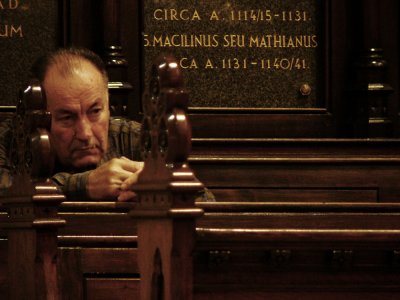 At Prayer, Cathedral of St. Stephen, Zagreb, Croatia, 2005
The man was sitting alone behind the main altar of Croatia’s greatest Cathedral, staring straight ahead with clasped hands. He was so deeply into prayer and meditation that he rarely moved or changed expression while I was there. I wanted to make an image defining his concentration and devotion. But I certainly did not want to disturb him. Sitting on a bench fifty or sixty feet away, I placed my camera on the back of the bench in front of me for stability. My 432mm telephoto lens allowed me to reach out across that space and the fill nearly half my frame with the praying man. The light was very poor, but my camera has an image stabilized lens, which gave me the freedom to use both a low ISO (100) and a shutter speed as slow as Ľ of a second and perhaps get a sharp picture in the light that was available to me. I never use an intrusive flash, under any circumstances. I turned off all noises on my camera, and probably made about thirty or forty images of him over a ten- minute period. Many of them were slightly blurred, but this was one was perfect. He was so far away that my depth of field extended well beyond him and defined the names of historical figures on the wall behind him in sharp focus. This image is all about concern, acceptance, and perhaps a touch of sadness as well – all of them resonant human values.
6 comments leave a comment