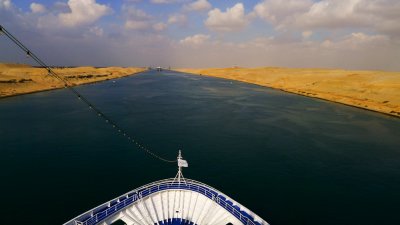 In transit, Suez Canal, Egypt, 2011
As our cruise ship slipped its way from the Red Sea to the Mediterranean, I made this image from just above its bow with a 24mm wideangle lens. The resulting vista offers a striking contrast in colors. The blue and white ship, dark blue water, and powder blue sky all call attention to the brown sands of the surrounding Sinai Desert. It is the limitless desert scenery that dominates the image and best tells the story here. The Suez Canal is, in effect, a ditch through a desert. 30,000 slave laborers worked for ten years under brutal conditions to build it between 1859 and 1869. Thousands of them died on the project. When it was finished, it had a dramatic effect on world trade. Combined with the American transcontinental railroad completed six months earlier, the Suez Canal allowed the entire world to be circled in record time. It accelerated European colonization of Africa, as well as making travel between India and Europe much quicker. Much later, the canal would become essential to Europe’s oil supply, and a vital strategic objective to fought over during the 20th century. It was and still is a vast undertaking. The traffic is heavy – we keep our distance, but we were never out of sight of another ship, mostly oil tankers.
8 comments leave a comment 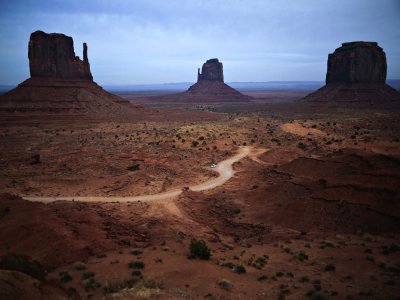 The road, Monument Valley, Arizona, 2009
Visitors enjoy Monument Valley’s ultimate vista from a hotel known appropriately as “The View.” It is an iconic view, burned into the American consciousness by the films of John Ford and the images of generations of landscape photographers. As evening descended upon the valley, I made my own version from the hotel parking lot, building my vista around the road that snakes into the distance and then vanishes into a gulch. Three cars can be seen here, adding a sense of scale incongruity to the vista. The color seems almost too rich to be true, begging me to tone it down, yet this rendering is very close to the colors I actually saw before me.
10 comments leave a comment 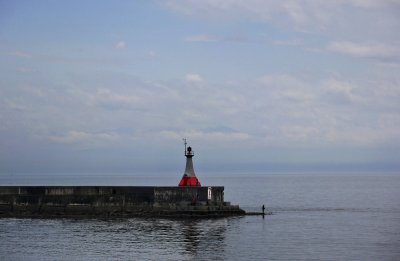 Fishermen, Victoria, British Columbia, Canada, 2009
As our ferry entered Victoria’s inner harbor, I noticed that people were fishing off the end of the breakwater. One of them stood out clearly against the sea, small in scale, yet as rigid as the light tower that looms over his head. The blue sky is filled with layers of soft horizontal clouds, contrasting to the precise alignment of the harsh, man-made concrete jetty. Ultimately, this vista symbolically expresses the role of mankind in the natural world – we may be small compared to the space around us, but our intrusion will leave a lasting footprint.
0 comments leave a comment 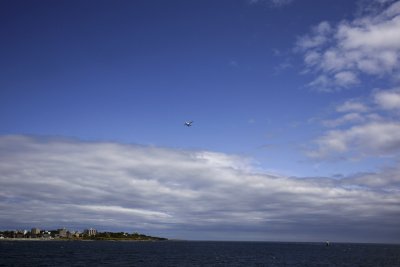 Flight, Victoria, British Columbia, Canada, 2009
A seaplane climbs into the sky over our heads, leaving the city of Victoria in its wake. I made the plane seem very small by using a 28mm wideangle focal length for this photograph. Yet despite its small scale, the plane is still the focal point of the image because of its placement in center of the frame. I layer this vista with four levels of content, starting with the dark sea at the bottom, then the small strand of buildings on the edge of Victoria’s harbor, and on up through a layer of clouds to the utterly rich blue sky overhead. This visit is about flight itself – a small plane frees itself from the earth and soars above the clouds into a limitless blue void.
0 comments leave a comment 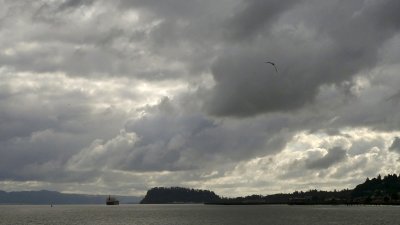 Storm, Astoria, Oregon, 2009
Two details bring this stormy vista to life – the distant ship entering the Columbia River, and the gull positioned directly over the darkest cloud. They form a diagonal relationship that echoes the diagonal thrust of the receding banks of clouds slicing through this wideangle image. The ship is a huge object, yet when seen at such a distance within a setting such as this, it becomes a lesson in scale incongruity.
0 comments leave a comment 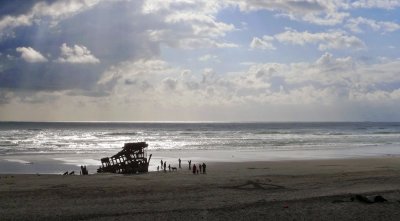 Shipwreck, Fort Stevens State Park, Oregon, 2009
Dual scale incongruities give this vista its melancholy, timeless mood. The ship, which ran aground on Columbia Beach one hundred and three years ago, is dwarfed by the vastness of the sea and sky. Meanwhile, the remains of the ship loom large above a group of tourists who have come to view it at the edge of the sea. Both the ship and the tourists are seen in backlight, which abstracts them as silhouettes, more symbolic than real. A closer look at detail shows the tourists in various situations – some tend young children, others make pictures, or share the experience with their dog.
0 comments leave a comment 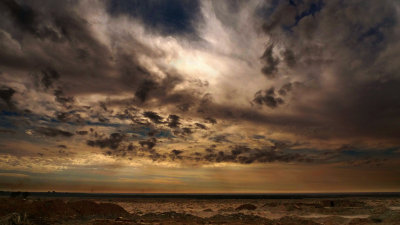 Sahara Desert, near Tozeur, Tunisia, 2008
The Sahara here is flat and rocky, the sky is filled with small clouds laden with moisture, and the horizon seems to stretch forever. I made this vista with a 24mm wideangle lens, which magnifies the sweep of both sky and land. The early morning sun warms the image, adding a surreal quality to the scene.
6 comments leave a comment 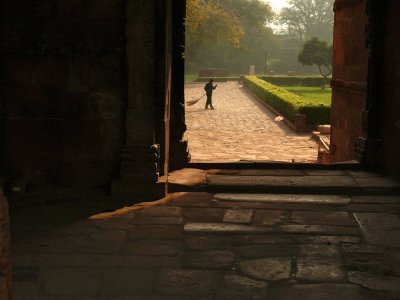 Sweeper, Might of Islam Mosque, Dehi, India, 2008
I shot from inside of the ruins of this mosque, India’s first, framing a vista of the courtyard within a doorway. The frame adds a sense of perspective to the vista, and intensifies the scale incongruity of the small sweeper working within a large space. The shadowy stone paving on the interior of the mosque adds further perspective by leading the eye to the frame.
4 comments leave a comment 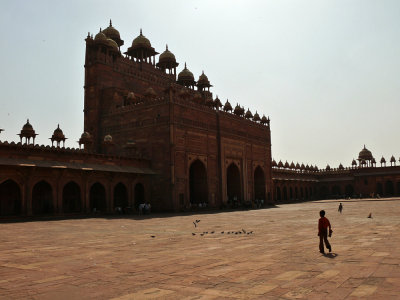 The Great Mosque of Fatehpur Sikri, India, 2008
A 175-foot high gateway -- the largest in Asia -- dominates a seven-mile long wall that encloses the Jami Masid, the great open mosque of Fatehpur Sikri, the capital of the Mughal Empire from 1571 to 1585. The city suffered a water shortage and was abandoned. To give this vista its sense of scale, I waited for people to move into the plaza. It took some time – no shoes are allowed here, and the stones of the ancient courtyard were scorched by the afternoon sun. Eventually two people, one of them with shoes in hand, made the trek through the pigeons across the hot stones. Their abstracted figures make the huge gate seem even larger. 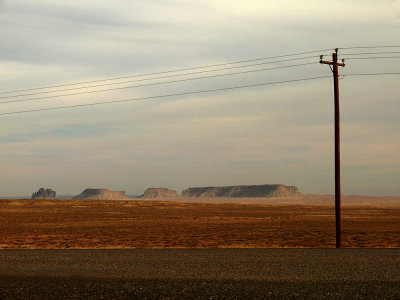 Navajo Reservation, Northwestern New Mexico, 2007
The Navajo homeland covers 26,000 square miles, occupying all of Northeastern Arizona and spilling over into Utah and New Mexico. Much of it looks like this -- high desert, buttes and mesas, and long roads lined with utility poles. I have built this vista around one of those poles. It brings to this scene a sense of scale and starkness, unfolding in a series of layers. An empty road offers a base layer, with the pole and its wires seemingly springing out of that road. The middleground layer extends all the way to the mesas on the horizon – a vast desert, devoid of human activity. A pale blue and gray sky fills the background layer, occupying two thirds of the image. This vista defines the nature of this place – arid, barren, alternately either very cold or very hot. This is home to the Navajo.
6 comments leave a comment 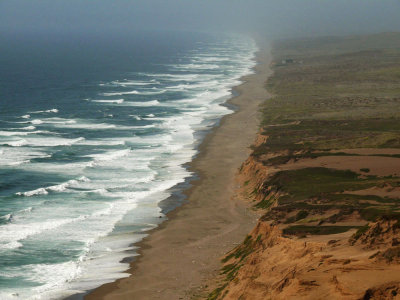 Point Reyes National Seashore, California, 2007
Point Reyes National Seashore is a 70,000-acre nature preserve in Marin County, 30 miles north of San Francisco. It is home to whales, elephant seals, elk, raptors and shorebirds. This view is from the Point Reyes lighthouse. This sweeping vista vanishes into nothingness as the distant fog obscures both land and sea in the far distance. The repeating horizontal thrusts of the waves energize the image. They play against the vertical thrust of the beach and the hills at right. The beach becomes negative space filled with tension. Meanwhile, the blue and white of the sea contrasts to the dull brown and green beach and hills.
23 comments leave a comment 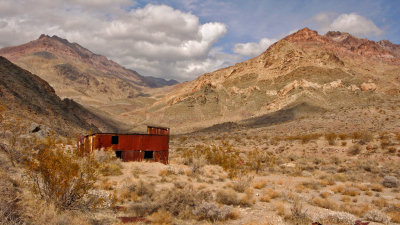 Survivor, Leadfield, Death Valley National Park, California, 2007
A one building town is a perfect subject for a vista – and Leadfield fills that role. It was a gold mining boomtown founded on distorted advertising. In August, 1926, more than 300 people moved to Leadfield to get rich. They didn’t. In February, 1927, everyone departed. Today only one small building survives in Leadfield. I photographed it from behind with a 28mm wideangle lens, so that I could embrace it with the very hills that were supposed to provide instant wealth. The red paint on the building may be 80 years old, but it still vividly anchors the image and gives the scale incongruity the image requires to work as an effective vista.
7 comments leave a comment