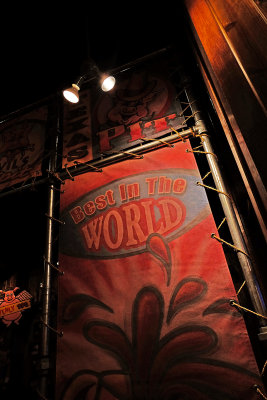 Best in the world, Chandler, Arizona, 2014
While dining in a local barbeque restaurant, I photographed a poster-like banner hanging just behind me. It modestly proclaims the food that I was enjoying to be “Best in the world.” To emphasize the meaning of this proud boast, I brought my camera down to a low vantage point, and using a wideangle lens turned vertically, I shot upwards to stress the thrusts of the surrounding diagonal wall and metal posts, helping the banner try to live up to its boast. I tilted the camera slightly to energize the diagonal flow of the image, and crowned the scene with a pair of diagonally tilted spotlights to echo the position of the surrounding diagonals. A small pig floats in the background, lending context to the nature of the restaurant itself.
0 comments leave a comment 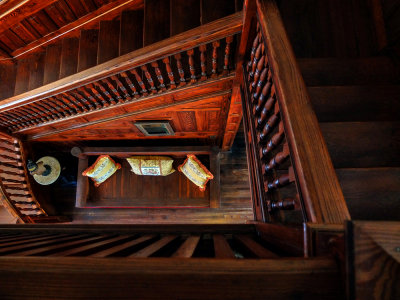 Stairwell, Koresham Utopian Community, Estero, Florida, 2013
I made this image in a home frozen in time. Climbing to the top of it stairwell, I shot down through a maze of hand carved wood surrounding three embroidered pillows resting upon a wooden bench. Those who lived in this self contained spartan community made everything by hand in their own factories and shops on the grounds. The ghostly rhythmic flow of stairs and railings that bore through this image reminds us of those who once lived and worked here. My high vantage point creates that flow and rhythm that speaks of the Victorian age.
0 comments leave a comment 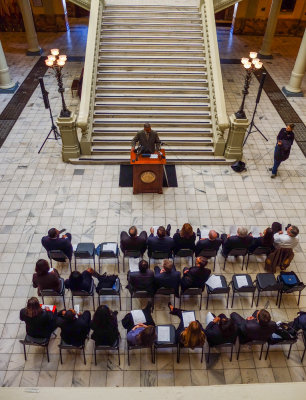 Press Conference, Georgia State Capitol, Atlanta, Georgia, 2013
The corridors of power in Georgia’s State Capitol building all lead to the vast rotunda under the capitol’s golden dome. I climbed to an upper level and photographed a press conference in session from virtually straight overhead. The setting composed the image for me – the marble steps leading down to the center of the historic rotunda stop just short of the official who is addressing the press and other dignitaries. The audience, carefully aligned in three neat rows of chairs, listens attentively. My vantage point abstracts the entire conference, avoiding identity and instead stressing conformity. Everyone seems equal here, except for the primacy of the speaker himself. My vantage point also highlights the press release itself – at least 15 copies of it can be seen resting on chairs and in the hands of the participants. The ink-on-paper and verbal communication here might seem incongruous in an age when information is generally transmitted digitally. Yet when viewed in the context of this historic 1889 building, the papers and the speeches seem right at home.
0 comments leave a comment 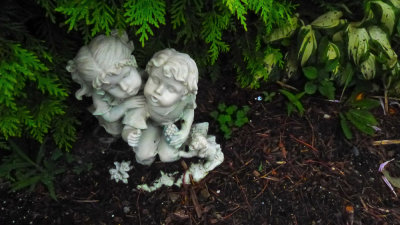 Consultation, Ipswich, Massachusetts, 2011
I found this pair of cherubs deep in a consultation. They were partially hidden in the shrubs bordering a suburban Boston home. I shot straight down on them, in the process turning my viewers into eavesdroppers. If we let our imaginations roam, we might hear snippets of their conversation. They could be talking about the berries they seem to be picking, or that small monkey pulling at a cherubic leg.
11 comments leave a comment 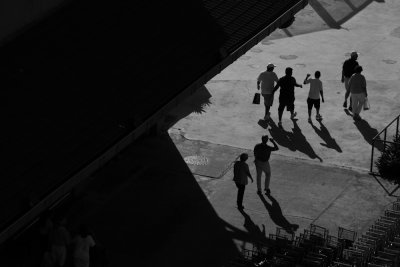 Cruise Terminal, Rio de Janeiro, 2010
I was standing on the top deck of a cruise ship, moored at the pier prior to our departure. There were other cruise ships at Rio’s port as well, and one of them was in the process of taking on passengers. I shot down on them as they emerged from the shadow cast by the shed of the terminal, capturing their energetic body language as they moved diagonally towards their ship. The shed creates a complementary diagonal thrust. By shooting down on the scene, I am able to shoot unnoticed and draw the diagonals together in my frame. The late afternoon light abstracts both terminal and the passengers, silhouetting everything. I converted the image to black and white to intensify the abstraction.
6 comments leave a comment 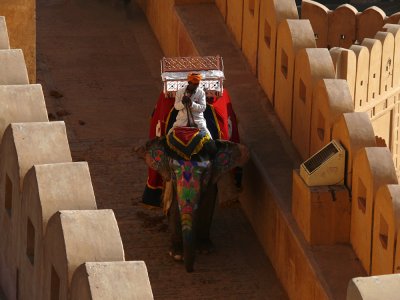 Painted elephant, Amber Fort, Jaipur, India, 2008
Dozens of elephants still walk the walls of this historic 16th century fort and palace. They were painted in brilliant colors on this day, possibly in commemoration of Hoi, the Hindu spring festival of colors. I was able to make this picture from an upper story of the fort. I noticed a steady stream of elephants carrying tourists on the road that ran along the top of the fort’s wall. I waited until an elephant without tourists came along, so as not to distract from the colorful decoration. I caught the multi-hued trunk from high above in all of its incongruous beauty. It is the high vantage point that makes this picture tell its story.
0 comments leave a comment 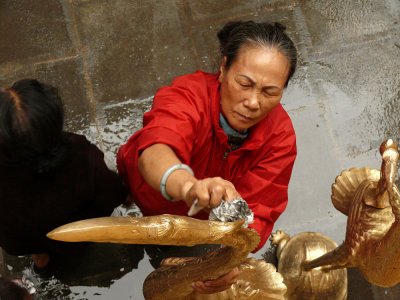 Preparations, Ambassador Pagoda, Hanoi, Vietnam, 2007
Early morning finds crews of temple volunteers polishing the ceremonial brass figures that adorn Hanoi's Ambassador Pagoda. I stood on a balcony overhead and shot straight down on a woman who was looking up at her work. The most effective way to photograph any person at work is head on, rather than from the side. Side vantage points are always passive instead of active, and invite confusing mergers in the background. If a person is looking down at their work, the photographer should get down and shoot up, even if it means getting on the floor. And if the person is looking up at their work, it is best to seek a higher vantage point, as I do here, and shoot down on it.
10 comments leave a comment 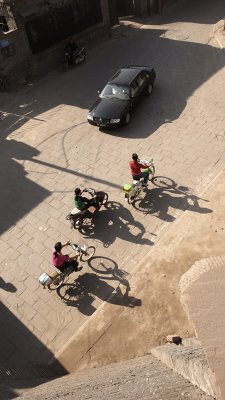 View from the wall, Pingyao, China, 2007
Pingyao is one of the few cities in the world still encircled by its original ancient walls. The walls date back to the Ming Dynasty (1370) and can be walked in their entirety within a half-day. They over an excellent vantage point for photography – we can look down on people going about their daily lives without them being aware of us. The high vantage point here allow me to contrast Pingyao’s large cyclist population to its relatively scarce presence of cars. It also stresses the bikes and their riders by making their shadows easily visible.
4 comments leave a comment 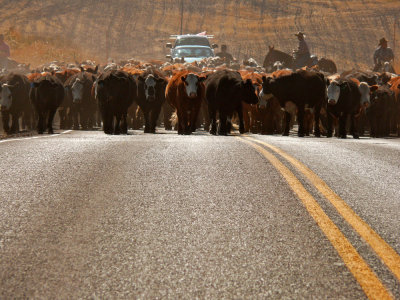 Cattle-drive, Henry, Idaho, 2006
Our van was held up for fifteen delightful minutes by a cattle-drive right up the center of the highway. Most of my shots were made through the open door of our van as these cattle flowed past us, but early on, when we first spotted them coming at us from a distance, I was able to spend a few precious seconds shooting from the middle of the highway. I took the lowest vantage point I could, lowering my camera to almost pavement level and looking down into my flip out viewfinder at the on-coming herd. I placed the double yellow line at the lower right hand corner of my frame, so that it would lead the eye into the heart of the herd. They were coming at me up a long slope, and I shot just as they reached the crest. The yellow line rises and then begins to fall as it vanishes into the herd. Cowboys on horseback drive the cattle from the rear, and traffic backs up behind them. My 420mm telephoto lens collapses the distance between these elements, and makes the distant field seem as if it is an earthen wall at the back of the image. This photograph is essentially a product of my own perspective. It is far more expressive than any of the images I made by shooting down on the cattle from our van as they passed us by, because my ground level perspective vicariously puts the viewer directly into the path of the oncoming herd.
31 comments leave a comment 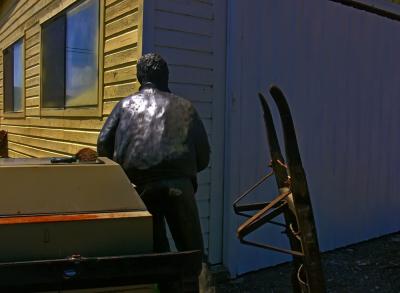 Metallic man, Gardner, Oregon, 2006
A local sculptor stores this life sized bronze figure just behind his gallery. It’s not ready for public showing, but it certainly makes a surreal focal point for this image. The key is my vantage point. The sculpture stands at the corner of the building, which allowed me to move behind it and link it to two separate walls at the same time. I abstract it, and at the same time pose a question: if it could move, which way would it go? He seems hemmed in by the stuff that stands behind him on the left. But the dolly that was no doubt used to get him where he is, stands waiting for him on his right. The rear vantage point intensifies the incongruity of his placement, and implies a potential future course of incongruous action.
6 comments leave a comment 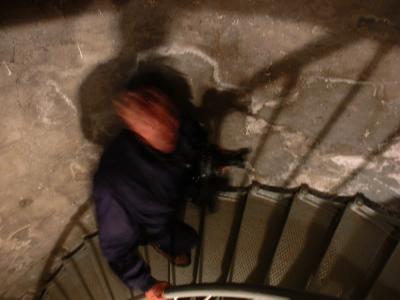 Phantom, Cape Disappointment, Oregon, 2006
In 1898, the North Head Lighthouse was built just north of Cape Disappointment -- a storm-swept graveyard of sailing ships. It is still in operation. Do shipwrecked ghosts still haunt this lighthouse? If so, could this be one of them? Using the image stabilization feature of my camera, I was able to hand-hold this image at one full second in the dark stairwell of the lighthouse as a fellow photographer, unaware of my presence, came walking up the steps. There is some minor blurring of the stairs and wall, but it supports the central point of the image: movement in time. When my fellow photographer saw me, he stopped in his tracks and looked up, blurring only his face. He graciously apologized for “ruining” my picture. Yet he gave me exactly what I wanted. A phantom. It is the face and the shadow coming out of the body that gives up the ghost here – a function of my high vantage point.
6 comments leave a comment 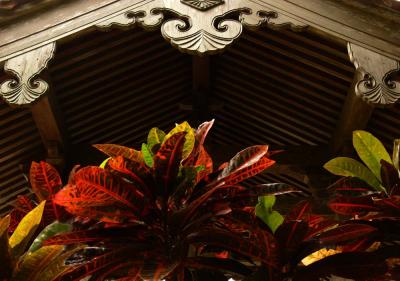 Tourinji Temple, Ishigaki City, Okinawa, Japan, 2006
Ishigaki, the southernmost city in Japan, is relative remote and tranquil, with a population of only 46,000. It overflows with lush plantings, such as at this neighborhood Buddhist temple. Using a wideangle lens, I placed the camera virtually on the ground and then tilted the lens slightly upwards in order to make the leaves flow into the beams under the temple roof. The design of my camera made taking this difficult vantage point very easy – it offers a flip up viewfinder, which allowed me to make this shot without having to burrow into the ground.
2 comments leave a comment