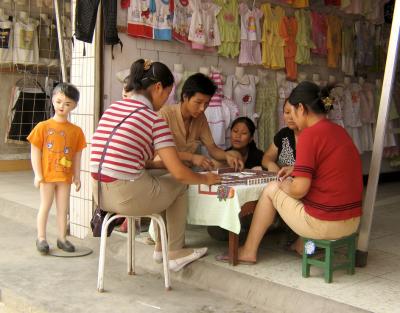 Mah Jong Game outside Xian, China, 2004
Our group was taken to a small village outside Xian that rarely sees tourists. Its narrow streets were lined with shops filled with goods designed for local, not tourist, consumption. I noticed the proprietors of this clothing shop playing Mah Jong while waiting for customers. A mannequin in the orange tee shirt waits for his turn. The mannequin looks more alive than some of the players, an incongruity that makes this photo so amusing.
13 comments leave a comment 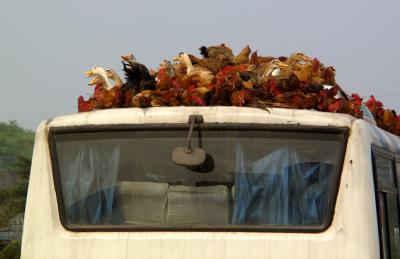 Riding high, near Chongqing, China, 2004
On the way from Chengdu to Chongqing, I noticed this gang of live roosters and geese somehow affixed to the roof of an intercity bus. Characteristic of rural China, this incongruous scene made a strange and unsettling photograph.
17 comments leave a comment 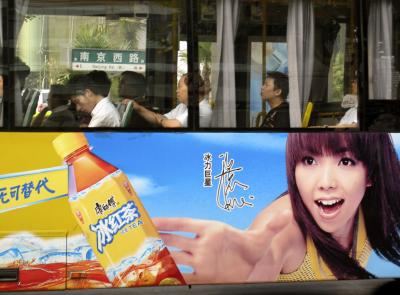 Commuters, Nanjing Road, Shanghai, China, 2004
I couldn't help but notice the difference between the energy levels of the model featured in the iced tea advertisement on the side of this Shanghai bus, and those of the commuters seated just above it. The incongruous juxtaposition of the worlds of advertising and commuting gave me a story-telling image.
24 comments leave a comment 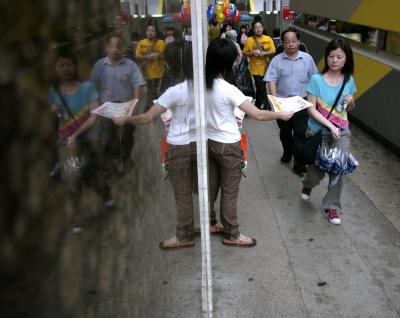 Double-take, Hong Kong, China, 2004
A stream of Kowloon shoppers do their best to ignore the handbills being thrust at them by this woman. I chose to double her task by reflecting it in a nearby window. Reflections often create incongruous relationships. This one is not only amusing but tells a story of frustration – even if there were two of her, and twice as many pedestrians, she would still be coming up empty.
36 comments leave a comment 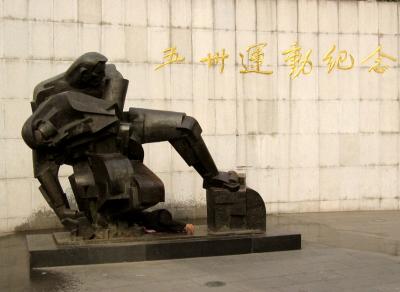 The remembered and forgotten, Shanghai, China, 2004
Shanghai is a city of incongruous contrasts. In People's Park, a heroic, large scale sculpture recalls the heroism of Shanghai students who died in a long ago revolution. Yet beneath the legs of this sculpture we can also see the legs of an unknown vagrant who is among the forgotten of Shanghai.
8 comments leave a comment

USS Midway and Friend, San Diego, California, 2004
The hull of the famed US Aircraft Carrier Midway, now a museum in San Diego Harbor, dwarfs this small Naval Security ship on patrol. I made this photograph from the opposite shore with a 210mm telephoto converter lens, and then cropped off the flight deck to abstract the Midway, and make its massive hull seem even larger. This power of this image comes from its scale incongruity – the contrast of the small ship cruising along under the wave-like pattern painted on the side of the Midway’s hull. To me, the idea of this tiny boat guarding what once was one of the largest warships on earth was incongruous in itself. I simply had to find an appropriate vantage point, choose the right lens length, and capture the right moment to make it work as a photograph.
16 comments leave a comment 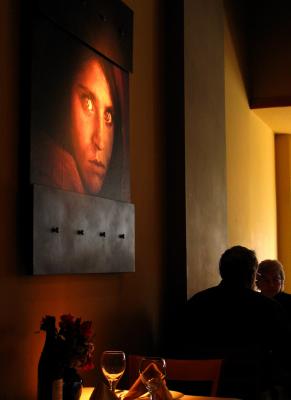 Afghan Dinner, San Diego, California, 2004
On my travels, I always carry a pocket camera with me, even when going to dinner at a restaurant. I want to be ready to explore any picture opportunity that might come my way. While visiting San Diego, I ate at an Afghan restaurant that featured a decorative wall hanging based on Steve McCurry’s haunting portrait of an Afghan girl. I noticed an elegant table setting just below it, and two silhouetted diners in the background enjoying a delicious Afghan meal. From the vantage point of my table, the piercing eyes of the Afghan girl seem to be looking into our souls – eyes that have known only poverty and suffering, now staring incongruously at us in a place of plenty. Using Canon S-400 “digital elph” pocket camera, I was able to unobtrusively make this shot without flash at 1/80th of a second at ISO 200. By placing a universal symbol of need within a scene of abundance, I create an incongruity that asks questions and demands answers from the viewer.
32 comments leave a comment 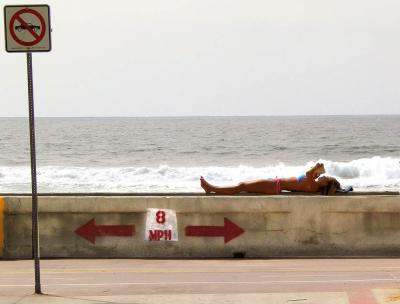 Going Nowhere Fast, Mission Beach, San Diego, California
While shooting in Mission Beach with my fellow pbase artist Tim May, we noticed a sunbather reading a book while reclining on the narrow ledge of a seawall. What made this picture opportunity particularly interesting to both of us was the incongruous placement of those huge red arrows and the speed limit for cyclists posted just beneath her, as well as the additional incongruity of the "No Parking" sign she is ignoring. Since she is otherwise engaged at the moment, she is oblivious to that speed limit – yet the thrust of the arrows seem ready to momentarily send her flying in either direction. I adjusted my vantage point to place the background surf just above her book, and waited for her to eventually shift the position of the book so that it did not merge into her profile. Only then did I shoot. The rhythmic repetition of the horizontal lines of the sky, sea, surf, body, wall, arrows, and sidewalk generate much implied movement, all of it juxtaposed against a subject going nowhere fast.
28 comments leave a comment 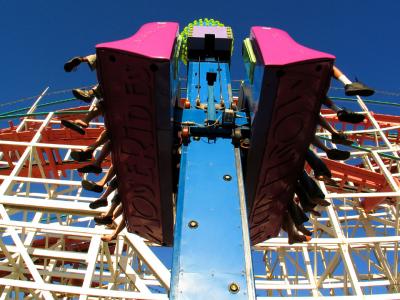 Flying feet, Belmont Amusement Park, San Diego, California, 2004
It is an incongruous sight, indeed, to see ten pairs of feet dangling in the air at once. But that’s what’s happening here as ten kids enjoy an amusement park ride that lifted them into the air and then abruptly dropped them with a jarring bounce. I stood beneath them, and using a wideangle lens to stretch the perspective, I shot as their twin pink chariots rose into a deep blue sky, placing a roller coaster behind them as context. This vantage point has abstracted the image by taking away the heads and bodies and leaving only the legs to plead for help
20 comments leave a comment 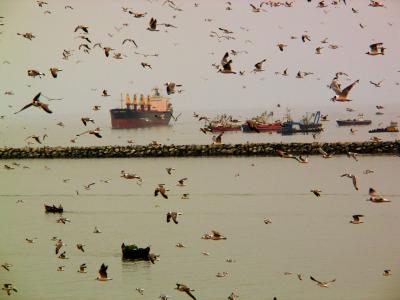 Birdstorm, Callao, Peru, 2003
As our cruise ship entered the harbor at Callao, Peru, I noticed great swarms of seabirds flying back and forth. Using a telephoto converter lens on my digital camera, I made a number of test pictures of birds in flight, but they said nothing about where we were. I then framed this harbor scene – featuring two small fishing boats in the foreground, a long stone breakwater in the middle, and a large freighter and a cluster of fishing boats on top. I waited until a mass of birds flew into this frame and I juxtaposed them against the harbor scene. Varying in size and wing position, they blanket the frame, yet magically leave space for the boats to float through them. It is an incongruous photograph – and one that almost offers us the sound of flapping wings and shrill cries.
32 comments leave a comment 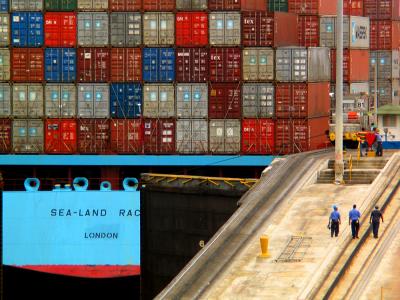 Containerama, Gatun Locks, Panama Canal, 2003
The spectacle of a huge container ship making it’s way through the Panama Canal with barely an inch to spare makes a perfect subject for scale incongruity. I cropped the scene boldly in my frame, showing only a part of the ships hull and a fraction of the containers piled high on its decks. In the lower right hand corner of this picture a ramp rises toward the ship, and three workers seem to be following along in its wake. By comparing that heap of containers to the three fellows ambling along behind this ship, I try to express the importance of the canal itself, a vital seaway that moves 200 million tons of through its locks every year. This mass of containers is just a tiny fraction of that enormous payload.
22 comments leave a comment 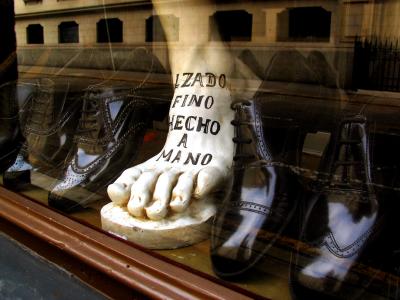 Shoe Store Window, Lima, Peru, 2003
The contrast between this huge white foot and the shiny black shoes produces a startling scale incongruity. I shot from an angle to avoid getting my own reflection in the image. That angle makes the picture work on still another level as it brings into play the surrounding buildings reflected on both the shiny shoe leather and on the glass of the shop window. Reflections are distortions of reality. The huge foot is also a distortion. Together, they create a surrealistic view of what a passing Peruvian might take for granted. I saw still another incongruity in those bold words – they tell us these shoes are made by hand, yet they are written upon on a foot.
27 comments leave a comment