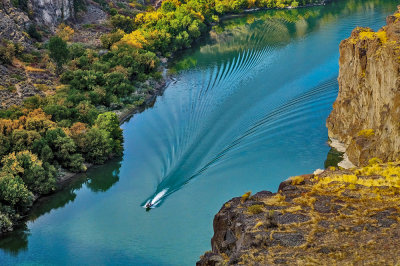 Passage through the Narrows, Snake River Canyon, Twin Falls, Idaho, 2018
We are standing on a viewing platform next to the Perrine Bridge, one of the ten highest bridges in the United States. It soars nearly 500 feet over the Snake River Canyon, just outside of Twin Falls, Idaho. I wanted to make an image with maximum tension. Using my long 250mm telepoto lens lens, I spotted a distant boat closing fast. I caught it just as it swept below me, sliding easily between the opposite shores of the river at its narrowest point. I loved the pattern created in its wake -- the river looked as if a filleted fish has been imprinted upon it. The most critical portion of this image, however, is the distance between the boat itself and the edges of land. This space is called Negative Space. The shorter the spacing between the boat itself and the sides of the river, the greater the tension becomes. Tension is the sense of being stretched almost to the breaking point, and while there seems to be plenty of clearance for this boat, the illusion of "threading the needle" is still present, an illusion which draws the eye and holds it.
6 comments leave a comment 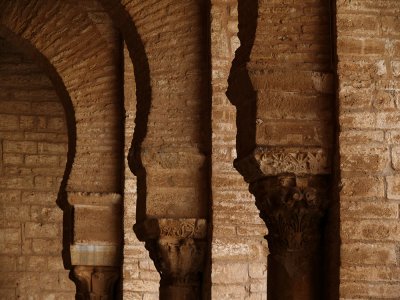 Pillars, The Great Mosque, Kairouan, Tunisia, 2008
Massive arches and pillars support the arcades of this 900–year-old mosque. I carefully adjusted my vantage point and frame in order to create minimal negative space between the two pillars and their lighter backgrounds in the center of the image. This reduction of negative space charges the photograph with tension, helping make the point that these pillars and arches have supported tremendous weight for centuries, yet the structure still stands.
4 comments leave a comment 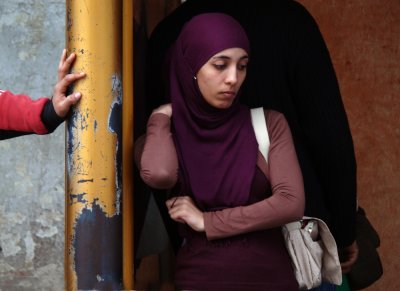 Waiting for the tram, Tunis, Tunisia, 2008
This image is all about hands, arms, and space. The woman waiting for her tram creates a square with her arms, as if subconsciously defending her space. She leans on a wall as she waits, while a man leans on a post adjacent to that wall. I cropped him out of my frame, leaving only his arm and hand to press against that post. The woman ignores his presence, yet we can feel the tension generated by the intrusion of the man’s hand into the frame. The battered post adds context – it is a well-worn barrier, separating two strangers in space.
6 comments leave a comment 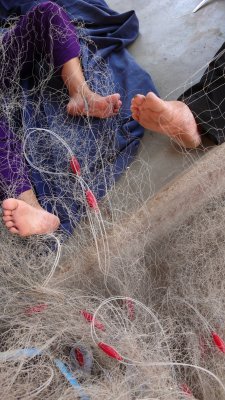 Mending nets, Nha Trang, Vietnam, 2007
Fixing broken fishing nets can take more than two hands. It can require the dexterous use of two feet as well. Instead of showing the whole person fixing the nets, I use only the feet, simultaneously drawing on both abstraction and tension to express the unique nature of the task. The tension here is in the negative space between the toes of two different workers at the top of the image. There is a sense of energy crackling in that tiny space, an energy symbolizing cooperation and teamwork. There is also a spot of tension between another big toe and the left hand edge of the picture. That toe is almost in danger of being cut off by the edge, yet there is a sliver of space that saves it from amputation.
6 comments leave a comment 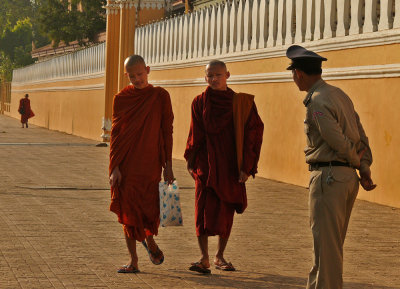 Confrontation, Phnom Penh, Cambodia, 2008
Look carefully at the body language in this image. Two monks approach the main gate of Cambodia’s Royal Palace. A policeman appears to have stopped them for a moment. Or has he? Perhaps he is just greeting the monks as they pass by. I sense the energy of companionship flowing between the monks, and strengthened it by waiting until they came as closely together as possible. The sliver of negative space between them creates a tension that unifies, rather than divides. There is more negative space between the monks and the policeman, symbolizing the gulf that exists between the secular and spiritual worlds. That gulf also produces a sense of tension. A third monk can be seen walking away in the far distance – the color and outline of his robes links him to the monks in the foreground, yet he is much smaller in scale and there is a large amount of negative space between him and his fellow monks, significantly reducing tension. The two monks in the foreground respond to the abstracted policeman in different ways – one lowers his head in humility, the other turns away with indifference. Both of these expressions intensify the tension in this image.
2 comments leave a comment 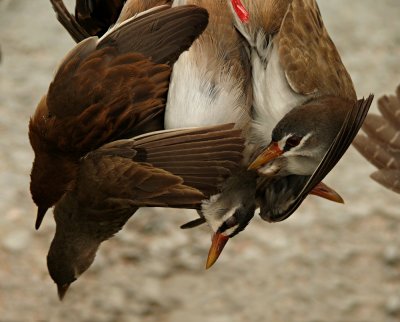 Captive waterfowl, near Vinh Long, Vietnam, 2008
Legs bound together, these birds will soon become someone's dinner. They hang upside down in space, their beaks probing the negative space that exists between them and the bottom edge of the image. There is great tension within that space – it represents freedom, yet they will never see it. A gloved hand reaches towards them from the right hand edge, the tips of the fingers grazing their feathers. There is considerable tension generated by that touch as well. There is always tension in a struggle; it is the negative space here that helps define it.
6 comments leave a comment 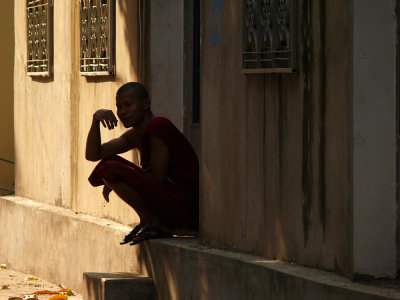 Monk, Phnom Penh, Cambodia, 2008
This image is an exquisite contradiction. The monk at first glance seems utterly relaxed as he watched me make pictures of him. I was using the full 420mm extension of my telephoto zoom, so he could not be exactly sure of what I was doing. I made this image as a silhouette to abstract his appearance and facial expression, and instead call attention to the outline of his body, crouched on the step of his residence. His hand is utterly limp, expressing a person at rest. Yet that hand hangs poised within an inch of his face, and there is considerable tension expressed within the sliver of negative space that flows between the hand and head. He may appear to be relaxed, yet his mind is working and the energy of those thoughts emerges through that tension.
2 comments leave a comment 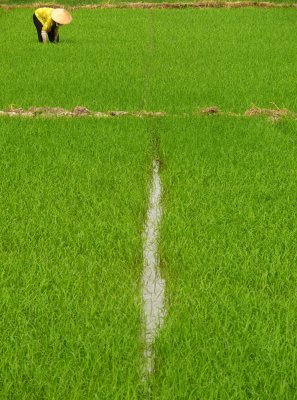 Hard labor, near My Tho, Vietnam, 2007
I organized this image as a study in tension. I deliberately isolated one worker from the rest, and placed the figure about as close as I could to the top of the image, creating tension between the body and the edge of the frame. There is also tension expressed in the imbalance I express by devoting so much space to the rice and so little space to the worker. I intensify this tension by framing the rice field in perfect symmetry, and then hurling the image into spatial imbalance through the asymmetrical position of the worker. The tension expressed through this imbalance makes the backbreaking work yet to be done seem even more formidable.
6 comments leave a comment 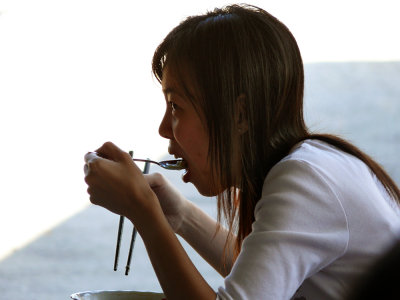 Soup break, Danang, Vietnam, 2007
The ability of the camera to freeze a moment in time can also help us express tension. By silhouetting this woman as she takes a soup break at a rest stop, I abstract her and thereby encourage the eye to read the profile rather than her expression. I create tension here by stopping a moment in time so the action is left uncompleted. The spoon full of soup already rests within the mouth, but it is not yet consumed. It is the negative space between the lips, teeth and spoon that carries the energy here. We see her during that first delicious moment of taste, her head pulled forward in anticipation of all that will follow. I’ve created additional visual tension by contrasting the diagonal flow of the arms and the horizontal flow of the spoon, to the downward vertical thrusts of the chopsticks and her long hair.
2 comments leave a comment 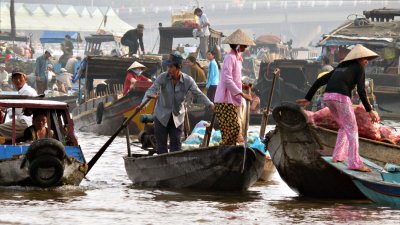 Floating market, Can Tho, Vietnam, 2008
The floating market near Can Tho brings hundreds of water-borne shoppers and vendors together in the Mekong River. It is a chaotic scene, enriched greatly by the tensions that flow within the streaming interaction. This image is another example of how to create tension by seizing a moment in time that expresses an uncompleted action as well as heightened sense of anticipation. It is an image with many layers – starting with the three boats in the foreground. The oar of the boat in the center of the picture just grazes the boat at far left, while the man holding that oar studies his position intensely. Meanwhile, the woman holding a paddle in the front of that same middle boat seems poised to avoid a collision with the boat at the right. Meanwhile, the woman in the right hand boat seems ready to lunge for an opportunity that lies just outside of the right hand edge of the image. This string of tension-laden relationships is backed by a second and third layer of boats and people that offer context defining the immensity of this market, one of the largest in Asia.
2 comments leave a comment 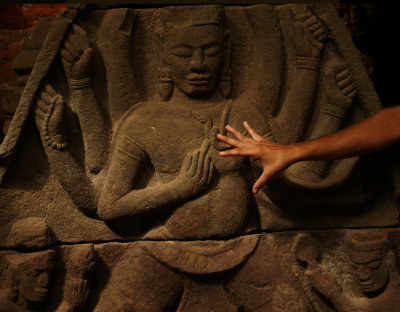 Ancient artifact, My Son, Vietnam, 2007
As I entered the museum gallery in the ancient Cham ruins at My Son, the first thing I noticed was the gesture of the multi-armed god Shiva. The hand over the heart is a universal gesture of love and compassion. A moment later, a tour guide began explaining the significance of the sculpture to his tour group. I anticipated his hand entering the frame, but had no idea that his fingers would fall within inches of Shiva’s fingers. And when they did, I tried to find the moment in time when the fingers would almost touch, yet still leave a sliver of negative space to create tension. It worked just as I had hoped. The tension between hand and hand is there, and so is the tension created by the sudden intrusion of the bare human arm, adding a human dimension to the spiritual sculpture.
6 comments leave a comment 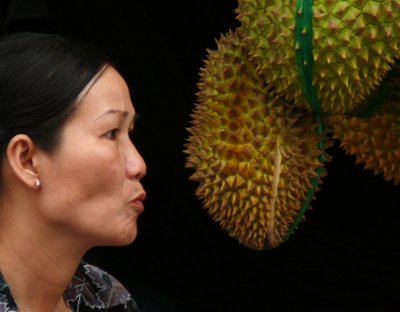 Sniffing heaven and hell, Ben Tre, Vietnam, 2008
This lady sells a fruit known as durian at the Ben Tre market. It apparently doesn't taste as bad as it smells. Some liken its odor to vomit, yet describe its taste as rich custard, flavored with almonds. The food writer Richard Sterling describes its odor as a blend of "pig shit, turpentine, and onions -- flavored by a gym sock." Durian is very popular in Southeast Asia, but it is banned from hotels, subways, airports and public transportation in many places. How does one make a photograph of a smell? We must find an expression that best defines it. This woman is obviously used to it – she seems almost ready to kiss its incongruously spiky surface. I leave a channel of black negative space between nose and fruit, creating anticipation and tension, and in the process, daring the viewer to smell it along with her.
4 comments leave a comment 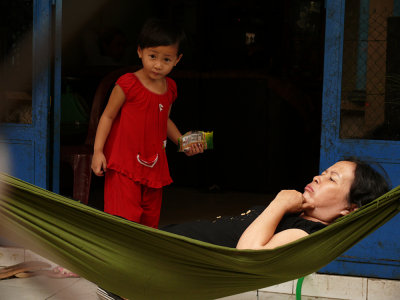 Waking mother? Near Saigon, Vietnam, 2008
This child appears reluctant to awaken her dozing mother, slumbering just outside of Saigon. Perhaps she is already awake and just pretending to be asleep? The little girl will soon find out. There is tension in the child’s body language and expression, as well as within the black negative space linking mother and child. That negative space is acting as an invisible barrier. Dare the child cross it?
2 comments leave a comment