Jay Gould's cane, Lyndhurst Mansion, Tarrytown, New York, 2019
Jay Gould was a leading American railroad developer and speculator. He has been portrayed as one of the ruthless robber barons of the Gilded Age, whose success at business made him one of the richest men of his era. He was hated and reviled, with few defenders then or now. He purchased the Lyndhurst Mansion and grounds in 1880, an estate of more than 400 acres overlooking the Hudson River.
I made this image in the mansion's entrance hall. Gould's own cane, capped by a gilded head of a eagle, was the first thing that I noticed as I entered Lyndhurst. It stands out, a contrasting to the dark, richly carved and engraved wood and metal hat and cane rack that supports it.
The eagle is a bird of prey. Gould was a man of prey. Gold is a symbol of wealth. Gould died leaving a fortune estimated at $77 million. Gould's gold cane is a symbol of his masculinity, urbanity, and wealth. If anyone should have tried to attack him, the head of this cane would have made a formidable weapon. Gould's cane makes an ideal symbol to sum up the character of the man himself.
0 comments leave a comment 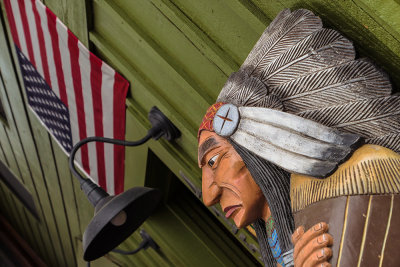 Reluctant patriot? Sun Valley, Idaho, 2018
This colorful "Wooden Indian" stands at the door of a shop in the ski resort town of Sun Valley. An American flag hangs above the door. I moved my camera position to link the two symbols and create an image that is intended to provoke thought on the part of my viewers. The "Indian" appears firm and resolute. I include a hand that strengthens his response. The flag over the door represents his native country. But does it? This image juxtaposes symbols that could convey entirely different points of view.
People within the Native American community often view "Wooden Indians" as offensive caricatures perpetuating inauthentic stereotypes of Native people. Yet, when paired with the American flag, this "Wooden Indian" might also be seen by some as defending his heritage as America's First People. Does this image speak of caricature or citizenship? It is a question worth thinking about.
0 comments leave a comment

Palm, Santa Barbara, California, 2014
I moved in on the bark of this palm tree, juxtaposing its carefully pruned crosshatched wood pattern against the new growth exploding within. In doing so, I create a symbolic relationship expressing the nature of life itself. The palm continually grows new branches that inevitably perish and are pruned away, leaving the mark of man upon nature. The pruning encourages new branches to grow, symbolizing the cycle of life and death. This image symbolically projects such a message, burnishing it with vivid color and tactile textures.
0 comments leave a comment

The fallen, Oakland Cemetery, Atlanta, Georgia, 2013
Thousands of Confederate soldiers are buried here – rank upon rank of them. Most of them were killed during the 1864 Battle of Atlanta, fought within sight of this cemetery. I found a fallen grave marker, bearing the name of a soldier named Ross, broken off at the base and resting in the dirt. It symbolizes the most important cost of the American Civil War -- or for that matter any war – the loss of an entire generation. Military graves fill this image, lending context to this broken marker. While the other markers may be upright, those stones ultimately symbolize the fallen as well.
4 comments leave a comment 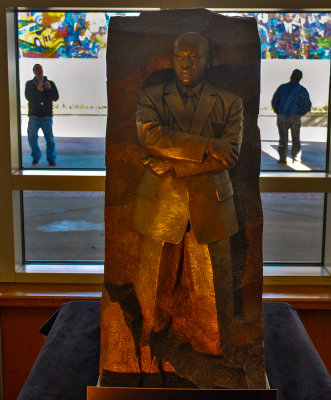 A stone of hope, Martin Luther King Jr. National Historic Site, Atlanta, Georgia, 2013
This is a relatively small working model, depicting the Martin Luther King Jr. Memorial in Washington DC, which is on display in Atlanta’s King Historic Site visitor’s center. The actual memorial to Dr. King in Washington stands almost 30 feet high. This model is about six feet high, and is placed in front of a window overlooking the plaza in front of the visitor’s center. I waited until two visitors were framed within that window, and then made this image to symbolize the meaning of this memorial itself. The figure of Dr. King glows in golden tones as it rises from a base of stone. It was designed to embody the phrase “Out of a mountain of despair, A stone of hope…” taken from King’s famous “I have a dream” speech in 1963. Behind King, two silhouetted symbolic figures pass in soft focus within a pair of windows. One of them is approaching, while the other is departing. Behind them is a softly focused mural, floating above a washed out plaza. The mural represents King’s unfinished dream, while I saw the figures in the windows as symbolizing “opposites” – a society where people should be free to make their own choices and move towards their own goals and purposes. The pose of Dr. King himself, arms folded and confident, reinforces that very idea.
2 comments leave a comment 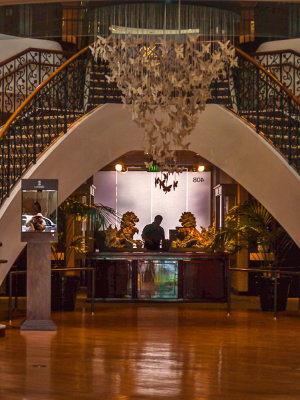 Sumptuous shopping, Rodeo Drive, Beverly Hills, California, 2012
I made this image from the street, shooting into an elegant shop through its doorway. (I notice that I inadvertently have inserted myself into this store – as I made the picture, I am reflected in the glass of the only showcase visible here.) The other person in this image is an employee, silhouetted against a glowing entrance from an adjoining interior hallway. The silhouetted man works behind a glittering desk, flanked by a pair of golden lions and adjacent palms. The sweeping hardwood floor leads the eye to a soaring twin staircase, centered on a mobile festooned with white butterflies. The store does not show off its products, indicating that its upscale customers must already be well aware of the rare and important items awaiting them here. The sumptuous shop is arranged like a stage-set. In this image, I emphasize the vast empty spaces, devoted entirely to creating an atmosphere of elegance, designed to express the importance of any transaction here. The Asian lion statues are metaphors for tradition, wealth and power. The silhouetted man (along with the street photographer reflected in the showcase) offer incongruous human touches, contrasting to the symbolic display of impressive symbols in this image.
2 comments leave a comment 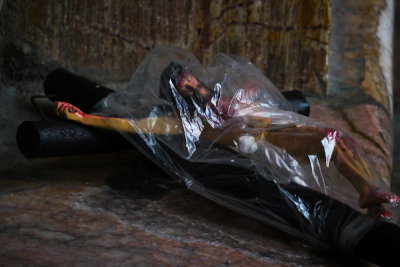 Crucifix, Cuenca, Ecuador, 2011
Religious symbols are regularly sold at the doors of Cuenca’s main cathedral. I noticed a crucifix, packaged in protective plastic, resting on the sidewalk, and photographed it from a low angle. When we see it from this vantage point, separated from all of the other crucifixes for sale, the plastic wrapping becomes less of a package and more of a shroud, a symbol full of religious implications.
6 comments leave a comment 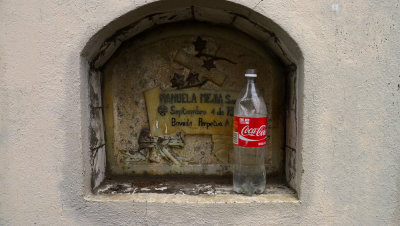 Vault, Cuenca Cemetery, Cuenca, Ecuador, 2011
There are thousands of burial vaults, very similar to this one, stacked in Cuenca’s main cemetery. This one, however, is different. Someone has left an odd memorial offering within the arched opening. Its red label stands out as an incongruous symbol of pleasures formerly shared, but now lost forever. The bottle is empty.
5 comments leave a comment 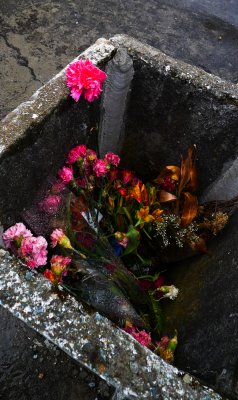 Discarded flowers, Cuenca Cemetery, Cuenca, Ecuador, 2011
A grim concrete container contains a discarded bouquet of flowers, symbolizing the thin line that exists between life and death itself. Groundskeepers at this cemetery remove flowers left on the tombs as soon as they begin to wilt – these, however, still show enough color to make us wonder if there was not still some life left in them. Another interpretation might be drawn: the blossoms that lie within this container might also be a metaphor for premature death.
2 comments leave a comment 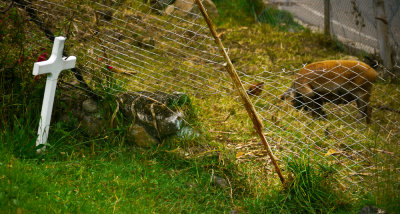 Life goes on, Checa, Ecuador, 2011
This small town’s cemetery lies on its periphery, farm animals grazing just beyond its makeshift chain-link fence. I juxtapose a long untended grave on one side of that fence, with a pig feeding on farmland just a few feet away. The image symbolizes the fact that life continues to be lived, even in the constant presence of death itself.
2 comments leave a comment

Politics, Paccha, Ecuador, 2011
The weathered political posters on the door of a village house symbolize the transient nature of political life itself. Winners and losers come and go here. Yesterday’s victory may well have become today’s defeat. The candidate at left still seems to survive, while the candidate on the right has long since fragmented into oblivion. Of course I have no idea if either of these candidates won or lost, or are currently still in office. But given the tattered nature of the posters, I would guess that both might well be yesterday’s news.
0 comments leave a comment 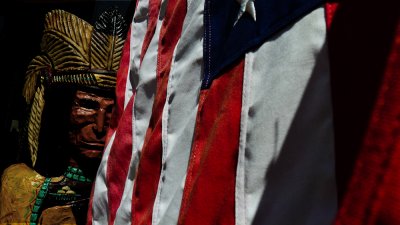 Assimilation, Scottsdale, Arizona, 2011
I shifted my vantage point so that this “Cigar Store Indian,” a relic of another time, appears to lurk behind the flag of the nation that appropriated Native American lands in the 19th century. The image symbolizes the essential question of assimilation: How will Native American identity and culture survive as it is absorbed into the American melting pot?
4 comments leave a comment