Gallery Thirty-Five: How style and interpretation combine as expression 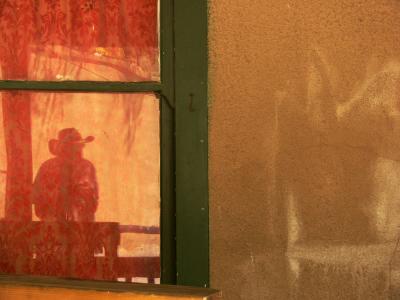 Exploring the past, Jerome, Arizona, 2006
Abstraction plays a significant role in my style. By showing less in my pictures, I hope to do more to the imaginations of my viewers. Whenever I can, I also try to create incongruous relationships, expressing human values to interpret subject matter and convey meaning. All of this is happening here. I caught my reflection in a window of an old house as I explored the streets of this crumbling 1890s copper mining town. Shooting from the waist, I was able to create an abstract portrait of myself as a silhouette. It incongruously merges with the red patterns of a Victorian era curtain hanging just behind the window. An even more abstract figure is softly imprinted in the aging paint next to the window. My wide-brimmed hat moves my abstracted red silhouette back into time, while the incongruous figure on the wall adds context, creating a ghostly effect.
18 comments leave a comment 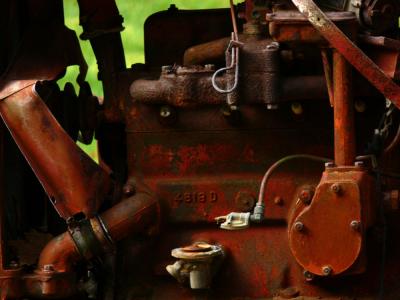 Heart of the machine, Oak Creek Canyon, Sedona, Arizona, 2006
Another characteristic of my photographic style is the use of vantage point to abstract the subject, showing only a small part of it to represent the whole. I abstract an abandoned vintage tractor by emphasizing only part of its engine, instead of the whole machine. The engine was at the tractor’s heart, and now it is stilled forever. Because I abstract the tractor in this way, it becomes more of a symbol and less of a descriptive fact. That, too, is part of my style – interpreting the subject for my viewers by using symbolism, is at the core of how I see and photograph.
5 comments leave a comment 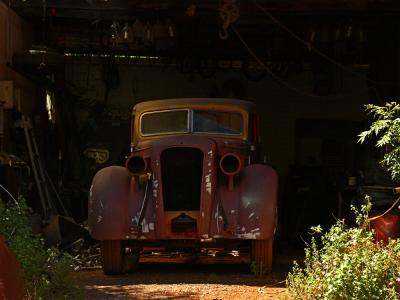 Ghost, Haynes, Arizona, 2006
This is the first of eight images I made while giving a field tutorial in Haynes, just outside of Jerome. In the 1890s, the village of Haynes housed Jerome’s copper miners. Today it is a commercially operated ghost town. Its ramshackle buildings house an assortment of vintage industrial equipment, including old trucks such as this one. I have a deep interest in the past, and that comes through in my photographic style. I will often make images that take my viewers back to another time and place. In this photograph, I contrast then and now by incongruously juxtaposing a dimly illuminated truck, parked just inside a dark garage, against the bright leaves of foliage. The garage and foliage here provide critical context for the truck. If I had just photographed the truck, it would be an entirely different kind of image. A major part of my photographic style is creating interaction between subject and context. In this case, the foliage is very much alive, bringing vitality and energy to the ghostly truck in that dark garage. I am implying that this truck may someday be restored, allowing it to roll out of that garage under its own power. Implication is another element of my style – I want my images to act as triggers to thought, so I do whatever I can to engage the imagination of my viewers.
12 comments leave a comment 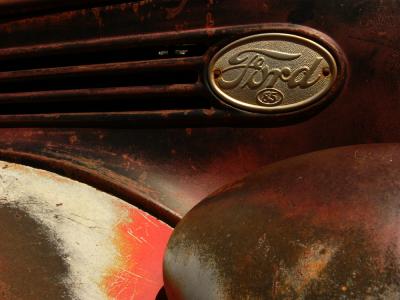 In motion, Haynes, Arizona, 2006
Another element of my photographic style is a desire to create a sense of movement within a still image. Although my subject is the rusted shell of a car that may never move again, I am able to imply movement by composing this image around a Ford logo that appears to be streaking across the top of the picture. Its oval shape leaves a trail of aerodynamic bars behind it. Many photographers stylistically prefer to use the abstracting power of black and white, but I usually work in color, because I feel that it brings a dimension of reality to travel imagery. I anchor my style around the dynamics of color itself. In this case the splash of red paint energizes the lower half of the image, while the oval logo speeds across the top half. The red paint links the curving line leading into the image from the left, with the curve of a fender at lower right. It stands out in sharp contrast to the rusty metal that fills much of the frame. If I had used black and white to interpret this subject, the image would not express as much motion.
8 comments leave a comment 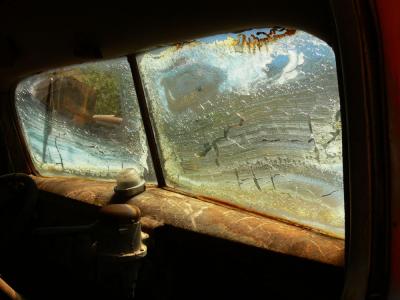 Driving blind, Haynes, Arizona, 2006
I build my photographic style around symbolism and metaphor. The glass in this junked car is no longer functional. It’s a symbol of blindness. By putting my camera inside the vehicle, I can make the viewer feel blinded as well. My style feeds on implication, and by using the blindness metaphor, I imply that our knowledge of the past determines how we deal with the future. This interpretive image asks us to consider not only where we have been, but also think about where are we going. My photographic style frequently draws on such metaphors, asking questions and demanding answers.
14 comments leave a comment 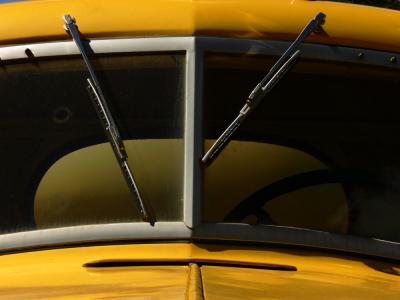 No hindsight, Haynes, Arizona, 2006
Compare this image with the previous photograph. In that one, I used metaphor to symbolize blindness to the future. In this one, I turn the metaphor around to imply blindness to the past. The future, on the other hand, is in full view. I abstract the cab of a restored 1930s oil truck by photographing its windshield from the outside. It wiper blades are at the ready, prepared to keep the glass pristine. Yet the cab’s rear window is opaque – the tanker behind it blocks the view to the rear. No hindsight here – this image is geared to imply only full speed ahead. Some of the elements of my personal photographic style should be easier for you to recognize by now – metaphor, abstraction, incongruity, human values, implication, symbolization, and the use of color, in this case a deep yellow, to energize the image.
9 comments leave a comment 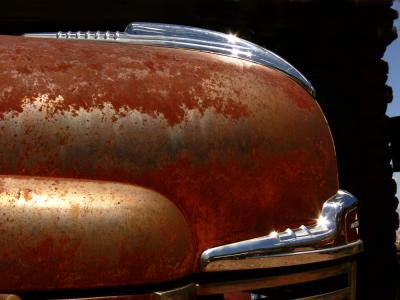 Deco contrast, Haynes, Arizona, 2006
My photographic style often draws its character from the incongruities I find along the way. An incongruity can be as small as contrasting the gleaming chrome decorating this hood and grille, to the rusted body of this vintage vehicle. Once again, my deep appreciation of the past informs my style – my vantage point stresses the Art Deco lines of both chrome and car. Deco is one of my favorite design motifs – probably because I was born when Art Deco was at its height in the mid 1930s. I can still remember the Deco curves of my father’s Chrysler, and my parent’s sleekly designed chrome Deco cocktail shaker. As I said in the introduction, we are what we photograph, and we photograph what we are. My style often generates nostalgic associations. The rust here implies the lost past. Yet the nostalgic memory of that past – the shining chrome -- still glitters in our imaginations. The car may be inert, but the presence of a thin, jagged strip of blue sky at the right hand edge of the picture implies that a rusted car with such sparkle may well rise from the dead.
8 comments leave a comment 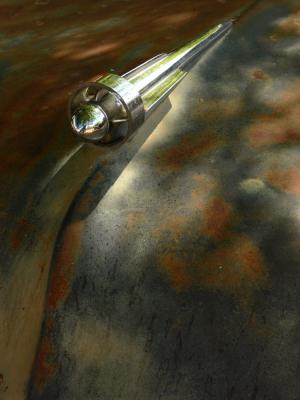 Streamlined, Haynes, Arizona, 2006
Another touch of nostalgia – this time a hood ornament from the 1930s juxtaposed with the hood of a faded, rusted gray car. My photographic style is attuned to the flow of light and shadow upon my subjects. In this case, light and shadow sculpt the ornament and hood into an embodiment of “streamlining” – a 1930s design form that presents little resistance to the flow of air, increasing speed and ease of movement. Form meets function in the design of the automobile – and the flow of light and shadow here embody the flow of air embracing the vehicle. The soft color palette subdues the image, allowing the illusion of airflow to slip around and through the image without competition.
2 comments leave a comment 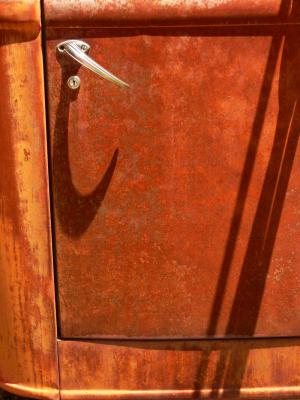 Shadow play, Haynes, Arizona, 2006
My photographic style also stresses shadow play and geometry. I use the shadows of both line and curve here to complete the geometry of a vintage truck door. The shadows add an interpretive element symbolizing labor – the door handle becomes an incongruous sickle, while the long diagonal shadows of flowing lines represent bars of strength. This vehicle was used in agriculture, and even though I abstract it down to just a door, the shadows offers our imagination hints at its function.
4 comments leave a comment 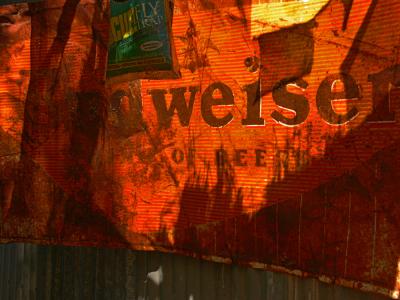 Luminosity, Haynes, Arizona, 2006
In last of this series of eight images I made while working with my tutorial student in Haynes, still another stylistic theme emerges: luminosity. An image full of light, particularly light that comes at us out of darkness, is rich in interpretive potential. In this image of well-worn outdoor advertising, there is also the suggestion of translucence. We can’t be sure if the light is reflecting off the large ad or coming through it, which adds to its symbolic content. The strident ads may extol the virtues of such products as fly-traps and beer, yet we no longer see this image as a story of selling. Instead, we sense the ebb and flow of light and shadow, muting the sales voice, and instead incongruously speaking of ugliness made into nostalgic beauty.
8 comments leave a comment 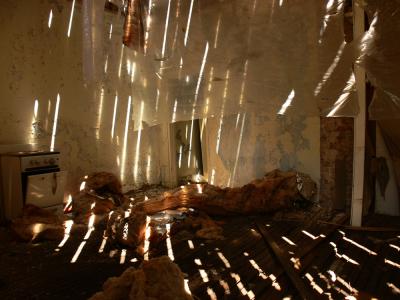 Derelict, Haynes, Arizona, 2006
The interior of a long abandoned building, littered with refuse, comes to life again in a cascade of light that incongruously implies rebirth. The light is passing into the room through exposed ceiling boards, creating patterns both beautiful and tragic. Beams of light have come to symbolize divine power, while exposed walls and ceilings represent decay and disaster – a conflict that draws the eye and triggers the imagination. I also include a stove, the last identifiable remnant of human habitation, to add a touch of human values. The image offers an ambiguous interpretation – does this shower of light represent a blessing or a curse? It goes against my normal style, which is to say more with less. But there are times where I gladly modify my usual style for the sake of interpretive substance. In this case, there was more to say by showing the extent of both the damage and the amazing light display. There is much here for the eye to discover, and much for the mind to think about.
15 comments leave a comment 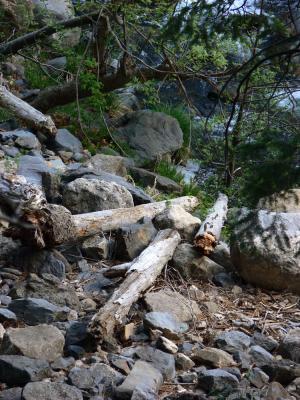 After the flood, Oak Creek Canyon, Sedona, Arizona, 2006
Several years ago, Oak Creek went on a rampage. When its flood ebbed, evidence of its power was left upon the land. I interpret the force of nature with this portrait of devastation. A tangle of fallen trees and stripped logs sprawl in the midst of massive boulders dislodged by the flood. What is normally seen upright is now prone. What we might regard as immovable, has been moved. The diagonal logs suggest the force of the flood as we move upwards through the layers of this image. We see small stones, the trio of ravaged logs, great boulders, a mass of broken branches, and finally a bit of the creek peeking through the twigs. This image is a naturescape, an interpretation of an event that is past -- yet its effect will be felt in this canyon for years to come.
2 comments leave a comment