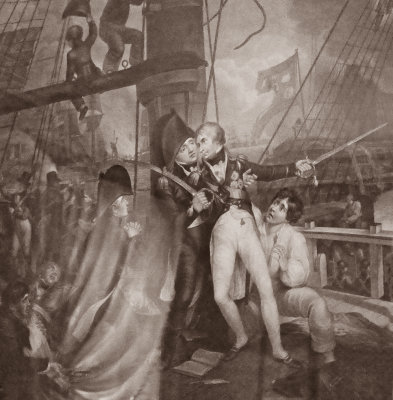 Death of Lord Nelson at Trafalgar, displayed at Boscobel Mansion, Garrison, New York, 2019
This work of art, commemorating England's heroic naval victory over Napoleon's fleet in 1805 at Trafalgar, hangs in the Boscobel Mansion's library. Boscobel was once the home of Elizabeth Dyckman, a woman loyal to the British Crown. She became a widow in 1806, just as this house was being built, and only a year after Nelson's death. It is likely that she hung this print in her home as a gesture of both pride and sadness.

The print itself tells a bittersweet story, with its hero perishing in the arms of his subordinates just as victory beckoned. I wanted to make a photograph of this print that told my own story. I noticed that the glass in print's frame was reflecting a flowing curtain elsewhere in the room. I framed only the most significant part of this print, and also changed my camera position, moving the reflection so that it fills only the lower left hand corner of my frame. The reflected curtain can now be interpreted as the spirit leaving the hero's dying body, and with it, the meaning of the entire picture changes.
0 comments leave a comment 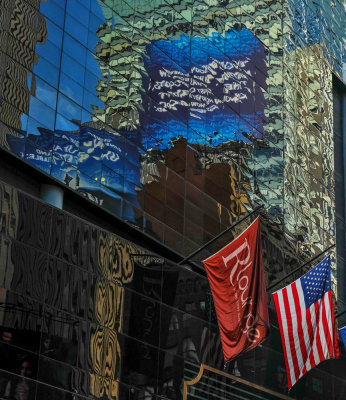 Hotel, Times Square, New York City, New York, 2013
Times Square offers more incongruous sights than probably any other area of New York City. The surrounding buildings are clothed in electricity and glass, creating a reflective arena that bends the eye and boggles the mind. I found this scene reflected in the glass façade of a Times Square hotel, a shimmering collage of shapes, colors, and patterns that demand attention and enliven the imagination. The reflections are constantly changing as the viewer’s positions and the light itself changes. The pair of flags, meanwhile, remains fairly constant, offering a predictable counterpoint to an unpredictable scene.
14 comments leave a comment 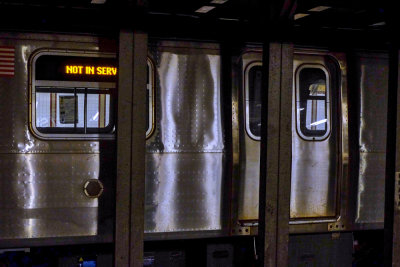 Subway car, New York City, New York, 2013
The vertical streaks of light reflecting off the side of an out of service subway car are echoed by the vertical posts in the foreground and the vertical posts seen through the windows in the background. The dim overhead light fixtures repeat the vertical patterns as well. The yellow “out of service” sign creates a focal point, a place for the eye to begin its exploration of this image.
0 comments leave a comment 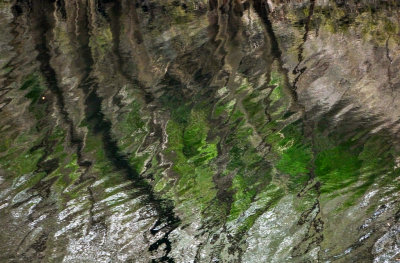 Suwannee River, White Springs, Florida, 2013
The Suwannee River lives in American folklore as the locale for Stephen Foster’s 1851 minstrel show song beginning with the famous words “Way down upon the Swanee River.” (Foster intentionally misspelled the river’s name to fit the melody of the song.) The Suwannee River is romanticized in that song, officially known as “Old Folks at Home.” (Foster never saw the Suwannee, and never visited Florida. He lived in Pittsburgh.) Although Foster’s lyrics used an archaic slave dialect that now seems to romanticize slavery and are often interpreted as racism against Black Americans, the Suwannee River itself will forever be linked to Foster and his world-famous song. I did not want to photograph the Suwannee River descriptively. It looks just like any other Southern river. Rather, I turn to reflection to speak of the mysteries that seem to flow within its currents. By abstracting this image, I cause those currents to turn trees into abstract wiggly probes, and vegetation into a green palette floating upon silvery powder. The name Suwannee lives only in the context – while the image itself lives entirely in the imagination.
2 comments leave a comment 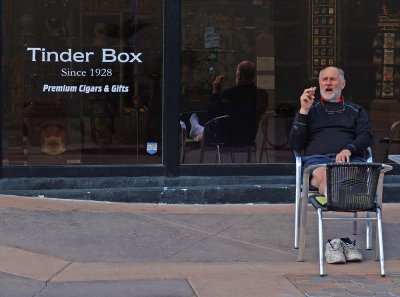 Lighting up, Palm Springs, California, 2013
Smoking in public is now a no-no in most places in the US, but not at this California cigar store. It has even placed a smoker’s table and chairs on its sidewalk, and this fellow, cigar in hand, has made himself right at home. The window behind him offers context, and one of its panels reflects the moment to double the pleasure. Because he has removed his shoes and uses another chair as a footrest, we can see his sock echoing the upward thrust of his fingers in the reflection as well. As I photographed him from across the street, he said something to a by-stander standing just out of the frame, energizing the image with his facial expression
4 comments leave a comment 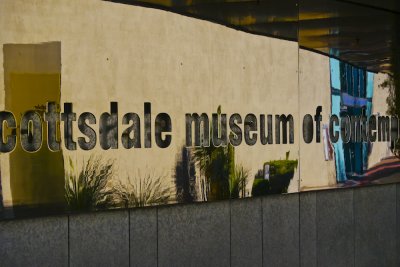 Art Museum, Scottsdale Civic Center, Scottsdale, Arizona, 2011
The Scottsdale Museum of Contemporary Art features reflective signage mirroring the Scottsdale Center for the Performing Arts, which stands just across the sidewalk. The reflection changes the appearance of the desert plantings that line that sidewalk, creating a work of abstract art by merging two artistic institutions into one.
0 comments leave a comment 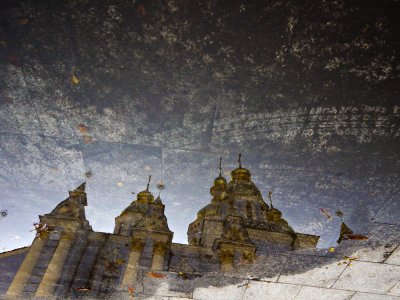 St. Michael’s Monastery of the Golden Domes, Kiev, Ukraine, 2009
This church, the headquarters of the Ukrainian Orthodox Church, was built only eight years ago. The original monasteries on this spot, were built from the 12th century on – the last of them was completely destroyed by Stalin 1937. It remained an empty lot until the Ukranian president ordered this reconstruction in 2001. I wanted to make the shiny new church seem more of an ancient vision, and less of a picture postcard. It had rained heavily the day before, and a drying puddle caught its reflection nicely. I photographed the reflection so that the building was cut off by paving stones at the top, and then turned it upside down to make the building seem to rise out of those stones and into a textured sky. A tire track arches across that sky, creating a stylized rainbow over the reflected golden domes. The monasteries of old seem reborn here.
2 comments leave a comment 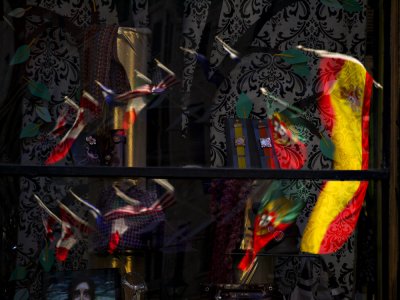 Flags, Montreal, Canada, 2009
I use reflection in a store window here to abstract a set of international flags flying over a nearby restaurant. The early morning light passes through the flags, creating translucence and vivid coloration. The wavy surface of the glass in this old store distorts the flags and molds the translucent color into repeating patterns.
0 comments leave a comment 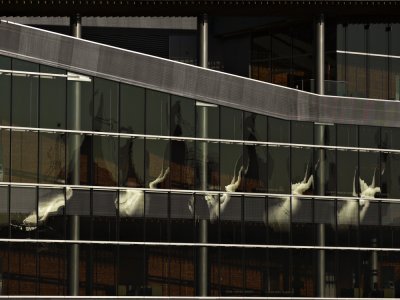 Convention Centers, Vancouver, Canada, 2009
The series of iconic “sails” that distinguish Vancouver’s old convention center at Canada Place reflects here in the windows of city’s new convention center, just across the way. The new building has yet to open, but already it seems to be intimately connected to its predecessor.
2 comments leave a comment 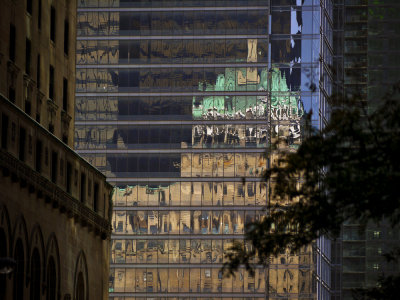 The Royal York, Toronto, Canada, 2009
Three centuries of architecture come together in this image. A 21st century office building reflects an ethereal visage of the early 20th century, green turreted Royal York Hotel, while a late 19th century office building provides contrast at left. I integrate the scene by including a spray of leaves at right, which point at the old office structure and overlap the reflected image.
2 comments leave a comment 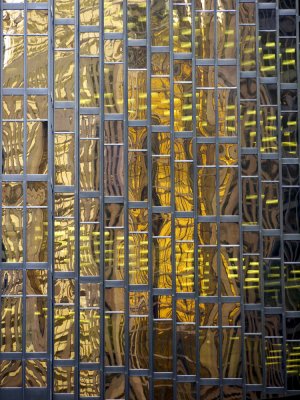 Gilded reflection, Toronto, Canada, 2009
The Royal Bank of Canada’s headquarters building in Toronto has more than 1,400 windows, all of them coated with a layer of 24-carat gold. The gilding, intended as an insulating material, added $70 to the cost of each window, an expense of more than a million dollars. The golden windows reflect adjoining banking institutions that make Toronto the financial center of Canada. This image offers just such a gilded reflection -- albeit somewhat bent out of shape -- an appropriate symbol for those who make (or lose) money with money in these troubled times.
8 comments leave a comment 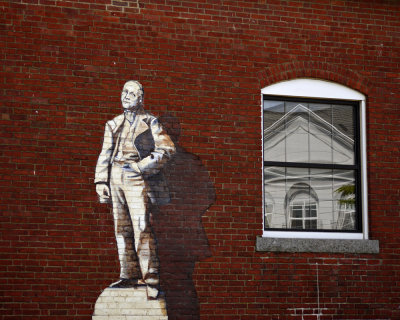 Historical harmony, Ipswich, Massachusetts, 2009
A figure out of Ipswich history is painted on the side of this building, once used as a mill by General Electric. His head is cocked, as if he is listening to voices from the past. Next to him, old window glass reflects a distorted view of another old building in the town. I honed down the image to just these two elements. Together they achieve a sense of historical harmony.
4 comments leave a comment