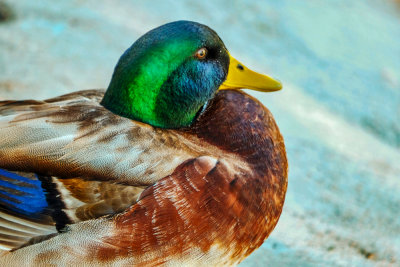 Waiting for a mate, Scottsdale, Arizona, 2017
The Mallard Duck is the most common wild duck in North America. Male mallards, their iconic green/blue heads gleaming in the sun, are among the most breathtaking species of waterfowl in the world. From fall to spring, these breeding male mallards, also known as “drakes,” are instantly identified by the brilliant colors of their iridescent plumage. This mallard was resting on ledge of a fountain in the Scottsdale Civic Center, virtually a stone’s throw from Scottsdale’s City Hall. Mallards may be among the most popular species of waterfowl to hunt, but these ducks, at rest within sight of the Mayor of Scottsdale’s window, seem to know that it’s illegal to shoot ducks here.
I made this image with a telephoto lens from a relatively close over-the-shoulder vantage point. The brilliant coloration plays against the texture of its magnificent reddish brown feathers. This image is both a wildlife study and an example of how nature uses color to bring a male and female together. I made this image in October, at the height of the mating season.
0 comments leave a comment 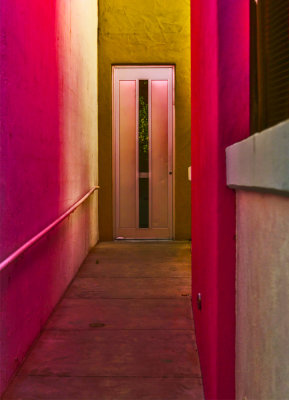 Hotel colors, Scottsdale, Arizona, 2017
I have often photographed this narrow passageway leading to a side entrance of a local hotel. Depending upon the angle of light and the nature of the hotel’s painted colors, this scene is constantly changing. In April of 2016, it looked quite different when I photographed it in morning light. (It appears immediately after this image in this gallery at http://www.pbase.com/pnd1/image/163098158). I built that image not only around its brilliant color contrasts, but also created a composition based on the geometric shadows supplied by the angle of the sun itself.
In October of 2017, I again went back to photograph this hotel, along with a former student. I made this photograph in the late afternoon, as the sun illuminated the end of the narrow passageway from overhead. I still use geometry to organize the image, but the colors become far more important. The saturated beauty of the pink and yellow paint, turning to red and orange in the warming light, now dominates the scene.
2 comments leave a comment 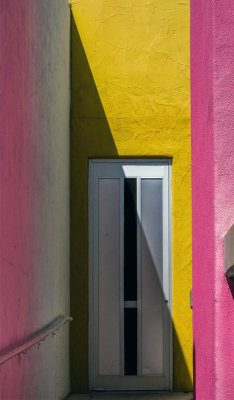 Geometry, Scottsdale, Arizona, 2016
I have photographed the exterior of this hotel several times over the past ten years. Back in 2006, the hotel’s exterior was painted in rich primary colors (See http://www.pbase.com/image/60068611) I recently returned with a tutorial student to find it currently painted in a more frivolous pairing of hues: deliberately contrasting yellow and pink with white. Nature also seems to be painting the hotel at this moment. The late morning shadows create a geometric pattern in this alcove leading to one of the hotel’s auxiliary doors. My composition leads the viewer’s eye through the entire image. A handrail on a white wall leads in from the left – the wall seems to be painted pink, however it is actually white. That back half of that white wall shows up as pink, a reflection bouncing off the opposite pink wall. The railing carries us towards the focal point of the image: a huge triangular shadow embracing the rectangular door within a bright yellow wall at the end of the alcove. The triangle neatly divides the image in half by running diagonally from corner to corner. The bright, vivid colors are playful – this hotel wants us to feel that it is a fun place to stay. The image itself becomes playful as well – the geometry is supplied by the position of the sun, and I use composition to link that geometry to the lively colors that express the character of this place.
0 comments leave a comment 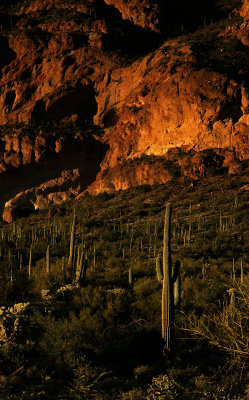 The colors of nature, Peralta Canyon, Arizona, 2014
The saguaros in the lower half of this image represent life. The contrasting top half of this photograph features dead stone, yet nature illuminates it with its last light and brings it to life as well. This story is best told by the colors themselves. The rich greens of nature rise upwards as the saguaro march towards the wall of Peralta Canyon. That very wall will stop their advance – nothing can live on that wall. Yet that harsh stone canyon wall in the upper half of this image glows with the symbolic spirit of nature, as the setting sun gilds the rock, and makes it into a work of great beauty.
3 comments leave a comment 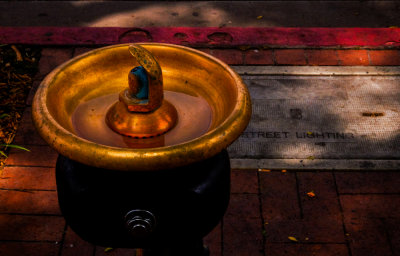 Drinking fountain, Santa Barbara, California, 2014
I found Santa Barbara’s State Street, its primary shopping avenue, to be full of surprises. One of them was this copper-colored public drinking fountain. Even though time and use have tarnished its finish, it struck me as an elegant way to present such a utilitarian device. I moved in to emphasize this fountain’s glowing color, which rises from the shadows as a symbolic oasis for those in need of free refreshment. It is a very simple object, yet through the interplay of color and shadow, it becomes something unexpected and incongruous.
2 comments leave a comment 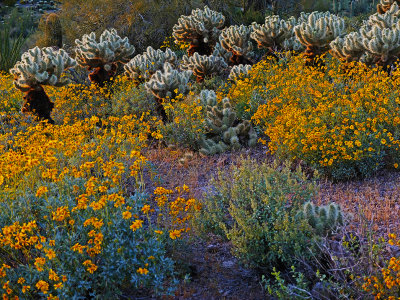 Desert in bloom, Superstition Mountains, Gold Canyon, Arizona, 2013
The company responsible for decorating a dining room opening this week at Sagewood, the retirement community where I live, recently selected this image as one of the new restaurant's six art pieces. (The theme of the restaurant itself uses the same title as this image, which made it a good fit.) They printed this image nearly four feet wide, so that it's detail will be visible from a distance. When I saw this large print for the first time, a message came through that was not immediately apparent to me. This layered mass of wildflowers became more than a mere carpet of color. It becomes a metaphor for the desert itself, a matrix of color and textures vividly contrasting to our pre-conception of what a desert looks like. The huge sizing of the print on the dining room wall made the spines on the cactus so visible that they powerfully contrast to the soft, delicate colors of the yellow Brittlebush blossoms arrayed below them. From a distance, an "S-Curve" composition becomes apparent -- the image flows out of the lower right hand corner and moves from purple and green to the bright yellow of the Brittlebush that sweep back across the entire frame into the row of Cholla cacti that carries us back across the uppermost layer of the image. This photograph makes a powerful counterpoint to the closeup image "Desert Surprise" that follows this image in this gallery. (The restaurant designers also made a large print of that image and used it to contrast with this one on an opposing wall. On the side wall that runs between them, they have placed four large paintings of vividly colored desert blossoms.)
13 comments leave a comment 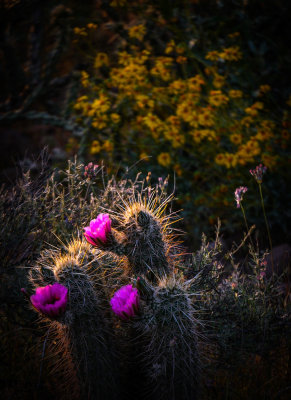 Desert surprise, Gold Canyon, Arizona, 2013
I made this image just as the setting sun grazed the bright violet blooms of a desert cactus. The sun also defines the sharp spines exploding around them. The luminous blossoms and their surrounding spines stand in sharp contrast to the already shaded masses of yellow wildflowers that fill a softly focused background. By slightly darkening the edges of the image in post-processing, I further stress the incongruity of this contrast in colors, telling an emphatic story of nature itself at work.
7 comments leave a comment 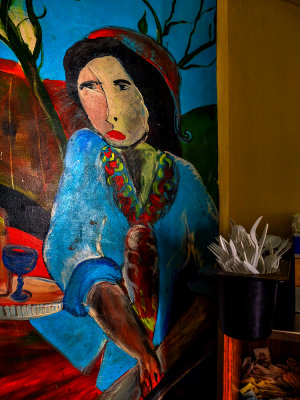 Coffee shop, Miami Beach, Florida, 2013
The lavish scale and color of this coffee shop’s décor was surprisingly elegant. I contrast the vivid coloration of this stylized painted diner to the monochromatic black pail holding inexpensive white plastic forks, bringing this image a touch of incongruity in both content and color. The brilliant color flows through into the lower right hand corner of the image, illuminating the shelf of a cabinet holding condiment packets.
2 comments leave a comment 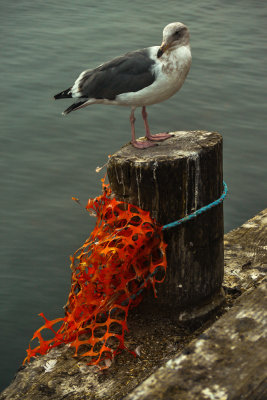 Shredded safety fence, Fisherman’s Wharf, Monterey, California, 2012
One of the most common travel photography clichés involves seagulls perched on piers. I resist such opportunities whenever possible, but in this case, the seagull has chosen a pier post draped in the shredded remnants of a vivid orange plastic safety fence. Such fences are often used to cordon off danger areas at construction sites, and this one has seen better days and obviously is no longer functional. The gull, pier, post, and water are virtually flat and devoid of much color, while the orange plastic net provides shocking contrast, grabbing our eye and holding it. Meanwhile the gull reacts to this intrusive barrage of color with utter dispassion. I’ve built this image around incongruous color contrast and placement, turning a mundane cliché into an image that asks the viewer to think about the possible reasons for such a net, and the bird’s matter of fact response to its presence.
0 comments leave a comment

Youthful visions, Monterey, California, 2012
A 200-foot long construction wall, surrounding the site of Monterey’s future Market Hall, has been transformed into a colorful vegetarian dream by noted artist Khalid Hussein working along side of a dozen local high school and college student artists. I moved in a particularly colorful segment of the wall featuring vivid primary colors and waited for this child to bring it to life by stepping into my frame.
2 comments leave a comment

Origami cranes, Forest Lawn Memorial Park, Hollywood Hills, California, 2012
Origami simply means “paper-folding.” Japanese culture has elevated it to an art form. The crane is a symbol of love, honor, loyalty, grace, and beauty. This tower of folded paper cranes, placed at a grave of a Japanese man, was no doubt left here as a powerful token of respect, love, and compassion. Each folded paper crane is beautiful in its own right, and the mass display, with its strikingly vivid colors, intensifies the effect. The prime colors of red, yellow, and blue are all here, as well as a strong representation of violet and green. The multiple colors stand out strikingly in contrast against the dark blue marble grave marker. I cropped the image tightly, forcing the multi-hued tower to explode upwards from its base.
0 comments leave a comment 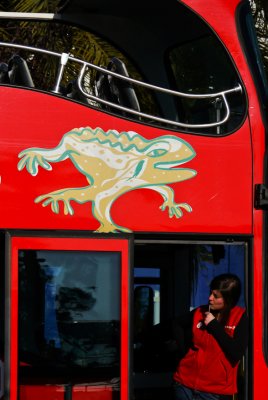 Tour bus, Barcelona, Spain, 2011
Barcelona’s “hop-on, hop-off” double-decked tour bus waits for customers near the port. The ticket agent and bus alike wear red colors, and its vivid hue drew my eye. I abstracted the bus by slicing it vertically at the front, pairing its incongruous hopping frog logo with the ticket agent who holds a pen to her lip. I also liked the way the curve of the window echoes the curve of the upper deck railing.
2 comments leave a comment