This gallery is dedicated to the beauty of my second native country, South Africa. Unfortunately it does not refer to the Otter Trail in America as many of you, dear visitors, would have subconsciously assigned it to. Otter Trail Reservations: Telephone: +27 12 426 5111 Fax: +27 12 343 0905 E-mail | General Info | Download Map | Tariffs 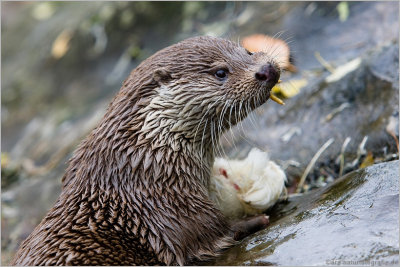 Lutra Lutra
A special thanks to my photo friend Annette Ralla on fotocommunity, for allowing her otter image to be used.
0 comments leave a comment 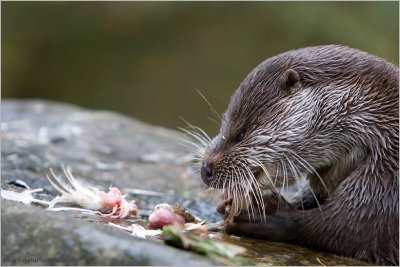 Otter
The legendary Otter Trail along one of the best pieces of cost-line in South Africa is undoubtedly every hikers dream.
The trail winds up and down (sea level to about 220m above) in the natural paradise of the Tsitsikamma National Park (Tsitsikamma - place of plenty water).
The trail was the first one in South Africa, laid out in 1968 by Dr. Robin Robinson along old fishermen's paths. He certainly could not foresee how popular the trail and trailing as such once would become.
0 comments leave a comment
Day One

Start to Ngubu4,6km - 3 hours On the first day, the trial winding through thick undergrowth and raising up to a nice and refreshing stream pool, the hiker bridges a 4.6km distance between the start at the Storms River Rest Camp and the first overnight stop, the Ngubu hut. This leg is rather easy walking with little difficulties for some of you overcoming the rocky profile just before the tracks lead to a cave.

Ngubu to Scott7,9km - 6 hours On day two, hikers have to cover a distance of about 7.9 km (as the crow flies as figured out later) between Ngubu- and Scott hut. This leg is a bit more strenuous, since it cuts several times 50m altitude profile lines. Now it will proof if you have choosen the right shoes and the approriate weight for your backpack. In exchange for the effort, hikers get rewarded with a peacefull rest at Blou Baai, which is actually the highlight of the day after crossing the Kleinbos River. This leg of the trail is to be considered as the highlight of the whole trip with regards to beautiful scenery and diversity of the terrain walked through.

After a preferably early morning walk, the now dramatically twisted coastline leads to a wide and open river mouth of Elandsboss. This is a very nice spot for a tea or coffee break. The wide sandy beach and the deeper regions of the river mouth further upstream invite for a swim. The tannine water color of the river is here exceptionally appealing. From here it's quite a long run (or at least it seemed to be for us after having a very long tea break) across rugged valleys for the river crossing at Lottering and on to the Oakhurst Huts. They are located right at the more rocky river mouth and this is how close you can get to the water for an overnight stop. General Info | View Map | Download Map | Tariffs
Scott to Oakhurst7,7km - 4 hours
0 comments leave a comment
Day Four

Oakhurst to André13,8km - 8 hours
By far this will be your longest day, including the all so feared river crossing of Bloukrans. A perfect situation would be to arrive at low tide at the river. This sometimes requires to walk the first one or two hours with your headlamps in the dark from Oakhurst as often suggested. We however took the chance and arrievd at top high tide. So we were definitely in for a swim. The sea water pushes quite far into the river and its waters are therefor not drinkable, its salty. So make sure you "fuel-up" while you can on this long stretch to André Hut on the Klip Rivier. Alow yourself a break after the crossing, especially after swimming, its quite strenuous. In February 2006 there was an upgrade made to the grill area, now you can sit under a nice thatched roof in the open.
General Info | View Map | Download Map | Tariffs
0 comments leave a comment
Day Five

If you not in a rush, you don't have to get up early. Although the start is quite steep, once you've reached the plateau it is more or less a catwalk. Sometimes hikers are like horses and go faster smelling "home", in our case the end of the trip. Take you time !! A perfect sandy beach awaits you, visible long before one actually arrives at Natures Valley. Don't miss out on a swim in the sea and a refreshing warm shower - for a change - at the rest camp. Spoil yourself with a refreshment from the Trading Store and receive - on request - your well earned certificate. Depending how you've got to the start of the Otter, you might have to take the bus to welcome back one of your most valued civil assets - after being away for five days in the bush - your car. General Info | View Map | Download Map | Tariffs
André to End6,8km - 3 hours
2 comments leave a comment