Start to Ngubu4,6km - 3 hours On the first day, the trial winding through thick undergrowth and raising up to a nice and refreshing stream pool, the hiker bridges a 4.6km distance between the start at the Storms River Rest Camp and the first overnight stop, the Ngubu hut. This leg is rather easy walking with little difficulties for some of you overcoming the rocky profile just before the tracks lead to a cave. 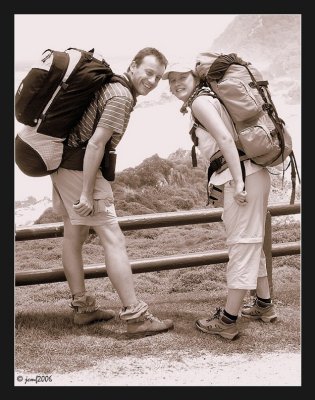 Dry Start
One can have either a dry or a wet start.
The coastline is known for its quick rapid weather changes. So be prepared anbd have some plastic wrap or better full size rain coat with you, that also would cover the backpack.
My sister came all the way from Germany to fullfill a longing dream.
The trail starts with its plaque at the end of the caravan park about 150 metres from the special parking area for hikers.
From here just follow the yellow footprints of the otter which are used as trail signs and appear on rocks and trees as you go. So be on the lookout for them.
0 comments leave a comment 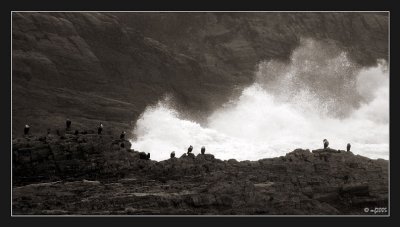 No Luck
Some Komorans sitting on the rocks waiting in vain for their wings to become dry again, since they do not have the ability, unlike other water birds, to grease their plumage themselves and so protecting it against water.
In addition it was drissling a bit which probably delayed the drying process even further.
0 comments leave a comment 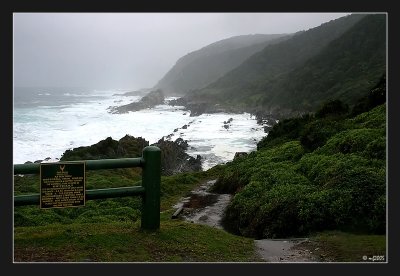 Wet Start
The bookings on the trail in a group are really difficult to get and should be made way in advance.
When I did the Otter the first time, I started totally on my own, since I got the trail hike as a present from my beloved wife and she managed to get me space from a cancellation.
So for single or paired hikers, here is the tip. Call the Park Reservations every Wednesday and one day you'll be lucky.
Anyway, on start this image shows how nature approached me with one of her lesser pretty days. The wind was blowing towards me with a slight inland angle. Within minutes everything was wet. Although the temperature was nice, wet hiking is not one of my favourite tasks.
Otter Trail Reservations
Telephone: +27 12 426 5111
Fax: +27 12 343 0905
E-mail
0 comments leave a comment 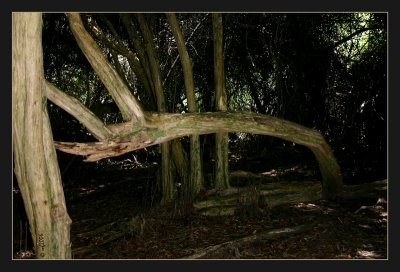 Deep In The
Undergrowth

After doing the first 1-2km's, where the landscape profile opens up every now and then for stunning sea view, the trail leads into thick undergrowth.

The sea water spray and the relatively good and more than sufficient presence of water (Tsitsikamma - place of plenty water) is simply the perfect environment for plenty species of plants, bushes, flowers and little trees.
Keep in mind the backpack might be higher as you when diving through this loggage. 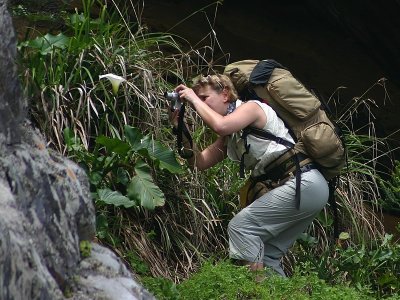 Object Of Interest
It is nothing else than a feast for the passioned photographer with plenty motives arround. Whole carpets of Arrum Lillies sometimes cover the ground, for instance a bit more upstream at Lottering River.
A trained eye will quickly pick up even the smallest items of beauty. Make sure you hike at a slow pace, enjoying the scenery, the crashing waves and rock pools, dense green forest and tannin-stained rivers.
0 comments leave a comment 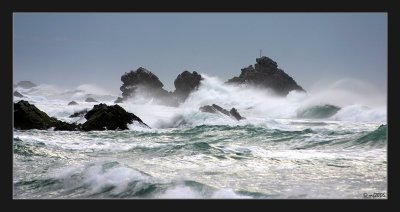 Wild Waters
When I did the Otter for the first time, I was not so privileged in terms of weather condirions in order to capture moments like this, when the sun tries to break through the mist leaving some pale reflections on the water for a short period of time.
In 2005 there was a ongoing drizzle which felt like needles in my face, emphasized by a relatively strong wind blowing towards me, when walking in the open. So I did not have much chances to take my photogear out.
0 comments leave a comment 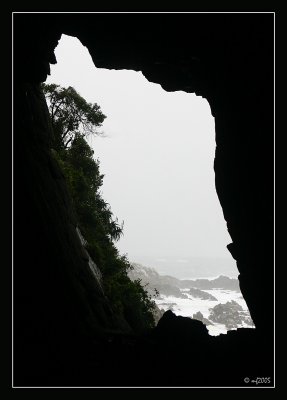 The Caveman
This little cave is situated about half-way between the starting point and the waterfall. In 2005 it gave me shelter from the rain. However I discovererd very shortly after entering that everything was soaked already.
Before the trail was opened officially the cave - not only home to hundreds of bats - was once a natural home, meeting place and "accommodation" at once for fishermen and strandloopers(beach walkers).
On hot days this is also a welcome cool off spot for overheated feet and heads (should you've forgotten your hat). The rocks on the caves floor are covered with the bats excrements and very slippery, so be on the watch out.
0 comments leave a comment