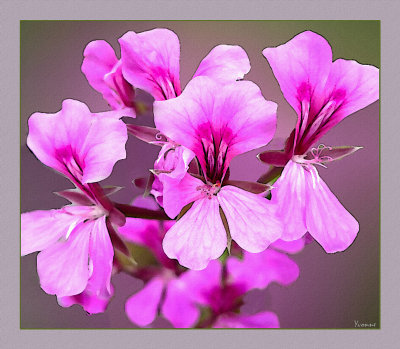 Ivy Pelargonium - mauve-pink
This one trails from a hanging pot and is always in flower. Not a large plant
and doesn't need a large pot. I'm now trying a cutting out in the pel patch to see
how it goes in the garden. 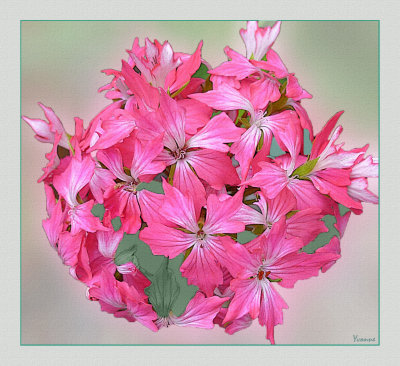 Pelargonium "Rosemary"
This one grows okay in a pot, but not very well in the garden, perhaps it will
improve over time.
I bought this one because it bears the same name as my sister. 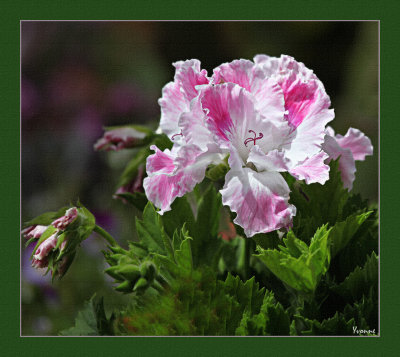 A new addition to the pelargonium patch.
This little plant found its way into the basket as I wandered around the local
nursery last week. This one has now been planted, and I discovered the name
is "Mon Ami" 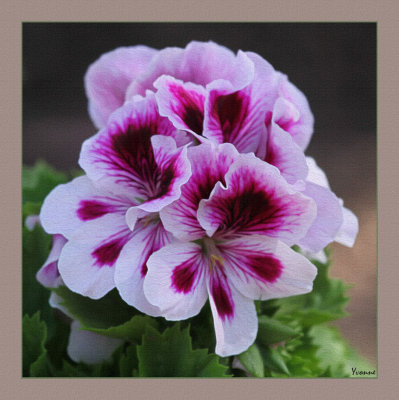 Regal pelargonium - new addition to the patch.
When I extended the patch I bought a few new varieties, and this is one of them.
It has just started coming back into bloom with several of these clusters appearing. 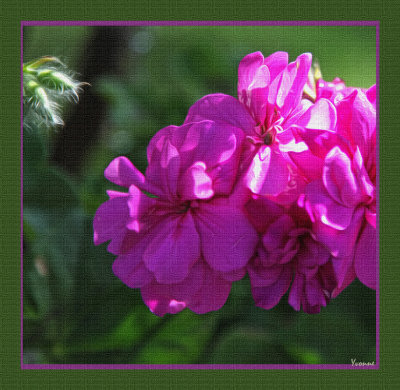 A new Ivy Pelargonium
I saw this one growing at a friends house, it trailed nicely and was covered in
blooms, and the friend offered me a cutting, and this is it now growing in a
hanging pot, hoping it will one day looks just as nice as hers did. 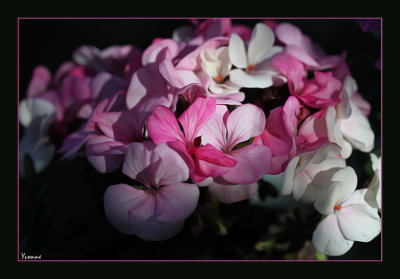 A new addition
A new hybrid pelargonium that has been added to my patch - it connects the
colours of one of the ivy variety that occurs here and there. I rather liked
the various colours featured in this cluster of blooms. 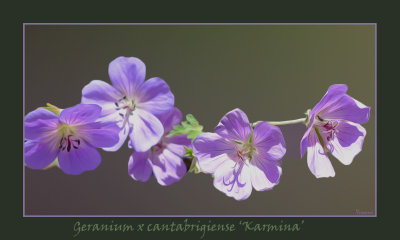 Geranium x cantabrigiense 'Karmina'
Commonly known as cranesbills, the genus Geranium - from Geranos, a crane,
encompasses a diverse group of plants together with many hybrids and cultivars.
There are some 300 species, mostly perennial and some sub-shrubs.
Most grow in the temperate regions of the world.
I have included these in my pelargonium/geranium patch for a contrast of colour and
planted them near the edge of the bed. 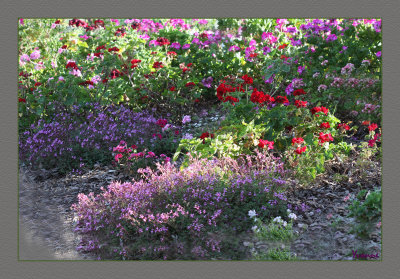 About a third of the patch
Growing nicely now, and good to see so many in bloom this season.
Photo taken from a different angle to the last photo I took (see next). 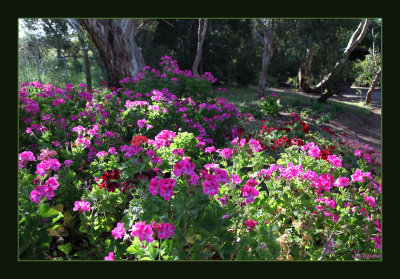 Pelargonium patch
There's a pink regal pelargonium that sends roots along underground which I
don't mind at all, especially when they all flower at the same time at this
time of year... I have started extending the patch - we have the space.
The patch is just inside our front gate. 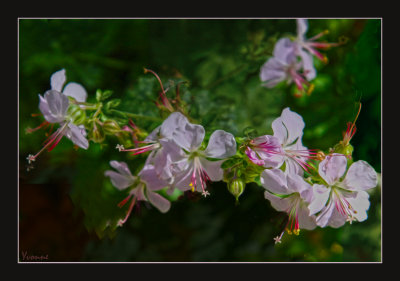 Geranium Biokova "Romantic"
Geranium Biokovo is a naturally occurring hybrid of Geranium dalmaticum and Geranium macrorrhizum found in present-day Croatia.
This stunning variety has an overall effect of a blushing pink geranium.
Plant with its deep rose colored cousin, Biokovo Karmina for a stunning combination.
Geranium Biokovo from the Biokovo Mountains in Europe exhibits masses of pink centered white flowers from late spring to mid summer.
The showy stamens dance with the slightest breeze. A delightful aromatic low-spreading mat of
fragrant foliage turns red in the fall making this a garden pleasure year round.
I have both the "Romantic" and "Karmina" growing in hanging baskets.. and pots and have experimented
growing in the garden, they are surviving in the garden so far, though rather slow. 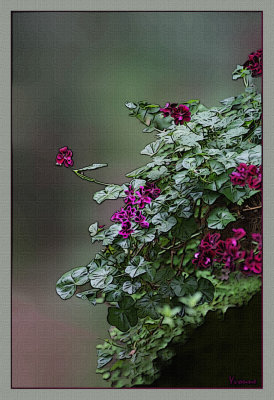 Ivy Pelargonium
I have this growing as a ground cover in the garden, and as seen here in
a hanging basket. I keep the basket trimmed to show off the unusual
colouring of the blooms.
If you scroll down this gallery you'll find a close-up of the bloom. 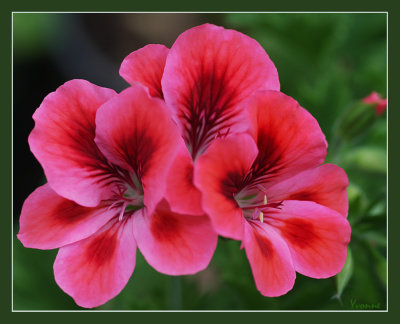 "Salmon Shades"
Another to add to my pelargonium collection, still in the pot it came in and
I have already taken 2 cuttings which have taken, and making an extension
to my pelargonium patch to fill with all the cuttings I have waiting to go in
as soon as our weather cools down a bit. This one is a "Regal Pelargonium"
and they often send roots underground and come up as a new plant somewhere else.
I like plants that do that!
click on thumbnails for full image