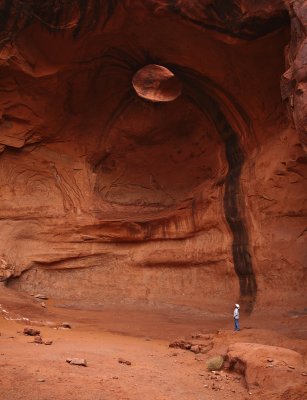 Big Hogan, Monument Valley National Park, Arizona, 2009
Our Navajo guide took our group to an immense cave featuring a round hole in its ceiling, very much like the hole in the ceiling of a traditional Navajo hut, or hogan. This image offers ample evidence of its likeness to a hogan as well as its huge scale. I used a 28mm wideangle focal length to embrace both the tiny figure of our Navajo guide and the huge hole in the ceiling. There is a black trail flowing down the side of the cave, probably the result of erosion or staining. I matched the man and hole by connecting them with this black trail. The image is a stunning example of scale incongruity. Without the guide as a scale reference, we would not know how large this cave is.
14 comments leave a comment 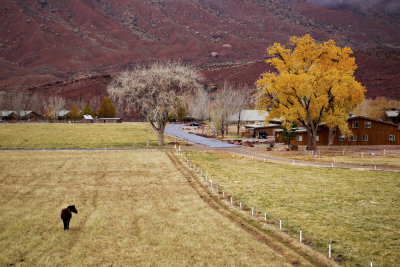 Ranch, Moab, Utah, 2009
One horse makes all the difference here. This is a large ranch, rich in natural beauty. But without the single horse as a visually incongruous reference, it would just be a literal rendering. There were many horses grazing in the pasture on the left, as well as a cowboy to manage things. All of my shots except for this one were diluted by their presence. For a very brief moment, all of the other horses moved down to the base of the pasture, allowing me to crop them out of my frame. Only this sole horse remained, giving us the incongruous idea that this glorious field is his and his alone, at least for a moment.
4 comments leave a comment 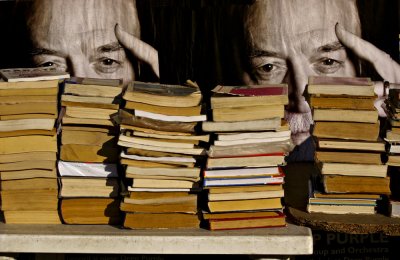 Bookstall, Bucharest, Romania, 2009
The well-thumbed paperbacks were stacked in piles before duplicate copies of a poster featuring the head of a wise looking man very much in the thinking mode. I moved my camera lower to bring the books up to eye level to further abstract the posters, and shifted my vantage slightly to allow the nose, mustache and mouth on one of the posters to show between two of the book stacks. In doing so, I create an image that speaks of bookishness in a whimsically incongruous manner.
6 comments leave a comment 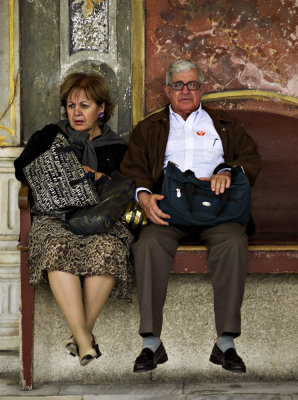 Tourists, Topkapi Palace, Istanbul, Turkey, 2009
Two short people share a very high bench after hours of touring the massive palace of the Ottoman sultans. Their feet do not touch the ground, yet they seem unaware that this fact miniaturizes them and peels away the years. It is an incongruous relationship, and makes us wonder, perhaps, if the rulers created such benches to symbolize their own superiority over those who had to sit on them.
2 comments leave a comment 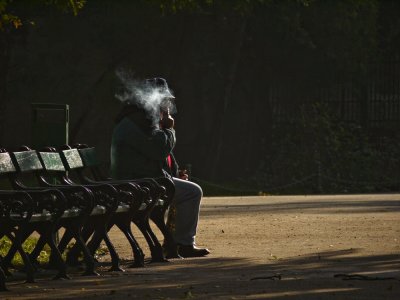 Smoke, Cismigiu Garden, Bucharest, Romania, 2009
It is not the act of smoking that makes this image incongruous. It is the volume, concentration, and position of the smoke at the moment of release that makes it unusual. This man was sitting in the perfect spot for such a shot – at the end of a row of benches, beautifully backlighted before a dark background. This allows the smoke to become translucent and thus more visible Using a long 400mm telephoto focal length, I shot many frames of this man as he smoked, and eventually knew exactly when he would exhale. I pressed the shutter on this shot a moment afterwards, while a cloud of smoke still shrouds much of the man’s head.
2 comments leave a comment 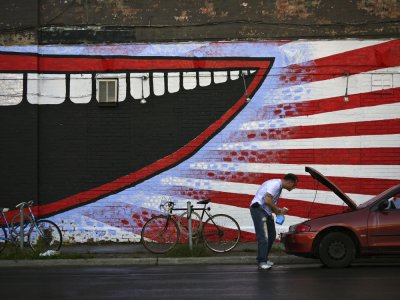 No laughing matter, Toronto, Canada, 2009
The half smile that fills this frame seems to mock the anxiety of a driver who I found bending over his car’s engine. The red rays of the smile may envelope the red car, but can’t make it run. The mouth in the wall mural, which is almost a block long in size, is incongruous in scale, as well as in its number of molars. I cropped the smiling mouth, along with its field of rays, in half in order to make the car and driver larger – it is so large that nothing is lost in the bargain.
I am indebted to the delightful pbase photographer Jude Marion, (judespics) who so kindly spent an afternoon shooting with me in Toronto, and took me to Queen Street where I photographed this unique scene.
8 comments leave a comment 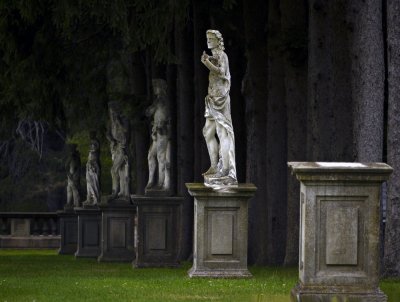 Missing, Castle Hill, Ipswich, Massachusetts, 2009
Rows of allegorical statues line the Grand Allee of Castle Hill, once the seaside estate of the Crane Plumbing family. For nearly 100 years, they have looked down on private parties and great public events. One of them, however, seems to have vanished, leaving its empty pedestal and all its friends behind. I put that pedestal first in line to make an incongruous point.
6 comments leave a comment 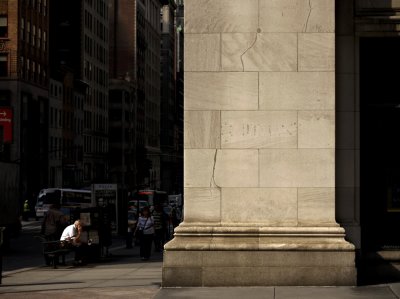 The call, New York City, New York, 2009
The massive towers of Midtown Manhattan dwarf a man who holds a cell phone to his ear. He is surrounded by thousands of people but for him only one person really matters at the moment – the person he is speaking to. The image is incongruous because of the disparity in scale between the man and his environment. He is but a tiny fragment of the total image, yet he stands out because of his placement in the frame and the flow of light and shadow around him.
There is another incongruous aspect to the image as well. The huge pillar that dominates the image once marked the corner of one of the New York’s most elegant 20th century department stores at Madison Avenue and 34th Street. The vague imprint of its name -- “B. Altman’s” – can still be faintly seen etched on one of the 95-year-old limestone blocks. This section of the store was opened in 1914 and closed in 1989. The building now serves other tenants, while the department store itself becomes ever more obscure – as obscure to most of us as the lone figure who bends over his cell phone in the morning sunlight.
2 comments leave a comment 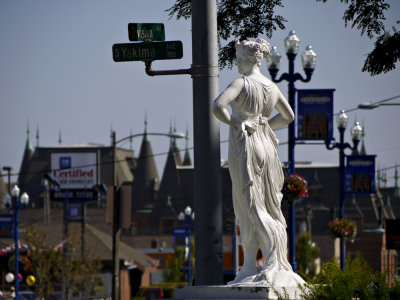 A new world, Wright Park, Tacoma, Washington, 2009
A pair of “Green Maidens” grace the Division Street entrance of this huge park, which opened to the public at the end of the 19th century. I photographed one of the statues from behind, hands on hips, as if she were gazing out at the city that has grown up around it. She has watched Tacoma change for more than 100 years, and seems a bit confused by the chaos that seems to exist just outside the entrance to the park. The incongruity comes in two forms: the statue is showing very human qualities, and its Victorian sensibilities seem very different from the turbulent city it now confronts.
0 comments leave a comment 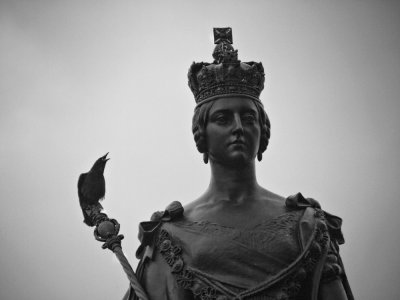 Royal advisor, Victoria, British Columbia, Canada, 2009
This animated black bird appears to be giving Her Majesty an earful. The royal response is predictably impassive. Statues are always hard of hearing. Upon such a fact, incongruities are based. Another coincidence sharpens the humor here. The birds sits on the end of the Queen’s scepter, her symbol of royal authority. The scepter is a symbolically perfect perch for the bird’s harangue. Both the bird and queen share coloration as well. The statue is black and so is the bird. The gray sky added still another monochromatic dimension, so I converted the image from color to black and white. The statue of Queen Victoria stands before British Columbia’s Parliament Building.
2 comments leave a comment 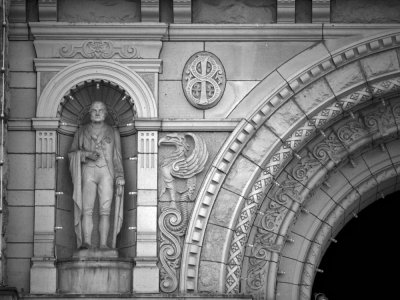 Electrified, Parliament Building, Victoria, British Columbia, Canada, 2009
When I zoomed in on one of the statues that flank the entrance to the British Columbia Parliament Building, I noticed that it stood inside of niche lined by light bulbs. The scowling 19th century statesman in the niche looks as if he is about to be electrocuted. This image is a good example of how small details can create incongruous meaning. All we need do is to isolate and emphasize them. (I have seen photographs of this building at night, and those tiny lights do serve a purpose – they illuminate the outlines of the building and its architectural features, making it once of the most striking sights in Victoria.)
0 comments leave a comment 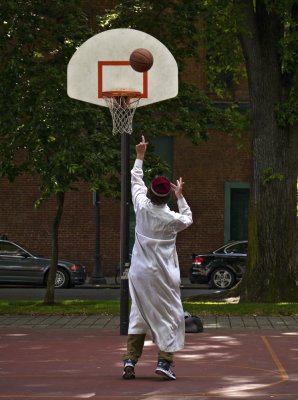 Off target, Portland, Oregon, 2009
To some eyes, the sight of someone shooting baskets while wearing Muslim dress is incongruous. He seems about to miss the shot, yet he still points one finger skyward in triumph -- another incongruity. I shot him from behind to abstract the subject and leave as much as possible up to the imagination of the viewer.
0 comments leave a comment