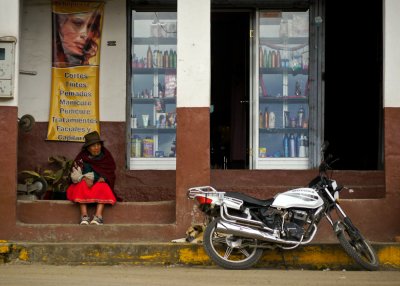 Changing times, Checa, Ecuador, 2011
A beauty shop and a parked motorbike offer an incongruous environment for a elderly village woman dressed in a traditional Andean costume and hat who passes her days by sitting on the square of this small village just outside of Cuenca. My eye travels between the picture of the glamorous model on the beauty shop’s hanging signage, and the impassive expression of the lady who takes possession of the steps below it. The sleek motorbike adds a contemporary counterpoint to the incongruous comparison.
2 comments leave a comment 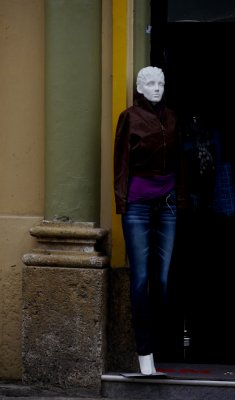 Mannequin, Cuenca, Ecuador, 2011
Mannequins are often incongruous, this one particularly so. I exposed on the sculpted white face, allowing the richly colored and textured costume to fade gradually into the dark doorway behind it.
The face and feet seem to be detached, floating in space, bringing an ethereal touch of additional incongruity to the image. The green column that rises beside the mannequin seems to stretch the image vertically, adding to the illusion.
2 comments leave a comment 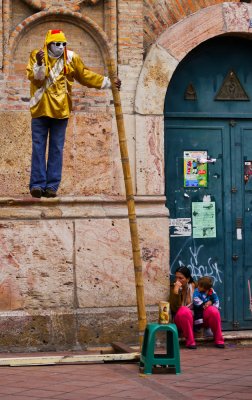 Mime, Cuenca, Ecuador, 2011
This mime seems to be precariously balanced on a ledge of Cuenca’s cathedral, an incongruous position in itself. Actually he gives the illusion of cleverly floating in space, well away from the wall, with only the large pole for support. His brilliantly colored clothing, featuring the primary colors of yellow, blue, and red, add a touch of gaiety to the image. I also include a woman holding a small child, seated at the base of one of the cathedral’s doors. Her pink pants seem to glow in response to the mime’s performance. A closer look at the woman, however, finds her in tears. She holds a handkerchief to her face. She sits between the randomly placed graffiti on the door, and the small table holding a donation can. She seems to be in great distress, an incongruous response to the illusionary performance overhead.
0 comments leave a comment 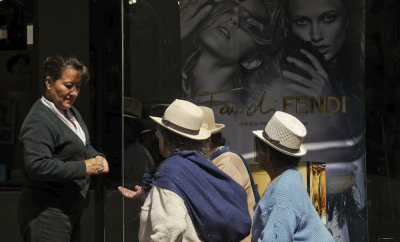 Charity, Cuenca, Ecuador, 2011
A steady stream of women, wearing the traditional Panama Hats of the Andean Highlands, came to the door of this perfume store to claim a few coins from this charitable shopkeeper. I found the juxtaposition of the impoverished women and the glamorously photographed figures featured in the shop’s window display, to be extremely incongruous.
0 comments leave a comment 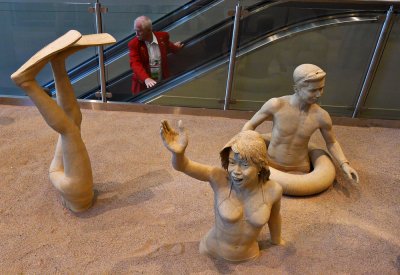 The beach, Phoenix Convention Center, Phoenix, Arizona, 2011
This beach is part of a work of public art in the Phoenix Convention Center. It is an incongruous work in itself, since the beach is set in a desert environment with no water in sight. Among the beachgoers is a fellow wearing flippers who is incongruously half buried headfirst in sand. Behind the beach, an escalator carries convention visitors from floor to floor. In this image, a conventioneer adds still another incongruous touch as juxtaposition to the work of beach-art. I link him to the beach scene by emphasizing his illuminated hand, which is aimed directly at the hand of the beach figure in the foreground.
2 comments leave a comment 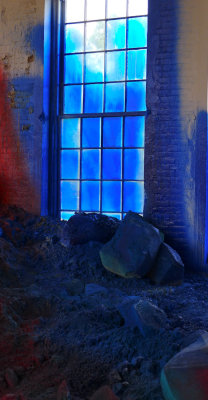 “One floor up more highly,” MASS MoCA, North Adams, Massachusetts, 2011
The bizarrely incongruous juxtaposition of blue Styrofoam boulders before a blue painted window and blue and red walls, is part of an installation by the German artist Katharina Grosse that fills a huge section of the Massachusetts Museum of Contemporary Art. Grosse’s art is intended to disrupt the logic of its surrounding architecture, while at the same time drawing attention to it. My image is intended to stress the artists message: migrating from the soil onto bits of walls and windows, her paint marries actual space to an illusion, asking viewers to understand that one is no different from the other.
0 comments leave a comment 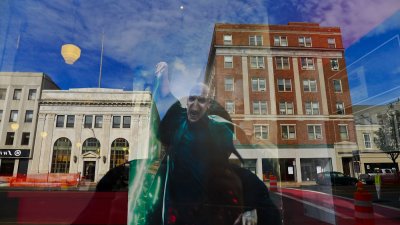 Reflections, Pittsfield, Massachusetts, 2011
I merge a window display featuring a menacing figure representing some kind of contemporary vampirish entertainment into a reflection of Pittsfield’s staid early 20th century business architecture.
The eras clash incongruously here. I used my own shadow in the window to bring out the figure.
6 comments leave a comment 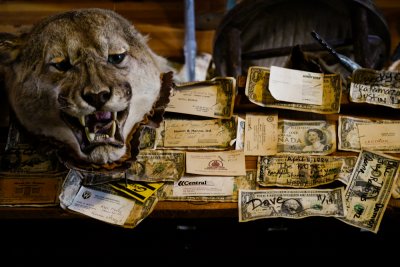 Mountain Lion, Tortilla Flat, Arizona, 2011
The walls and ceilings of the saloon in Tortilla Flat are papered with autographed dollar bills and yellowing business cards. The heads of stuffed animals placed in strategic locations incongruously punctuate the décor – in this case a mountain lion bares its fangs at me from the rafters. Everything I include here is incongruous, and by limiting my frame to just a small fraction of the astonishing available clutter, I make this place seem even more bizarre.
2 comments leave a comment 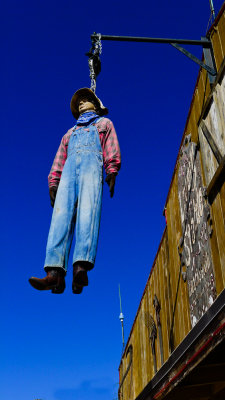 The hanging, Tortilla Flat, Arizona, 2011
Visitors often do a double take when they visit the old saloon at this former stage stop in Arizona’s Apache country. A body hangs over its entrance, a noose around its neck. I photograph it from down below, using the deep blue sky as background. The low vantage point makes it even more incongruous by removing much of its surroundings.
2 comments leave a comment 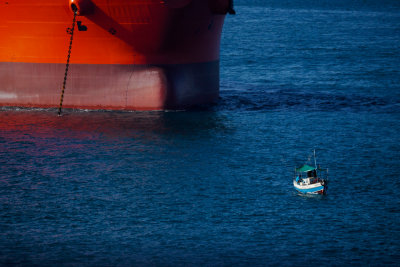 Comparisons, Salvador de Bahia, Brazil, 2010
There are always expressive photo opportunities awaiting us in harbors around the world. I enjoy standing on the deck of a ship as it enters a teeming harbor, and finding objects that I can juxtapose to express incongruous ideas. Our cruise ship approached a freighter, already anchored in Salvador de Bahia’s harbor. It had a bright red hull, which floated on a deep blue sea. Two primary colors, compared side by side, create the context for the image. I saw a tiny blue fishing boat approaching, and I waited for it to ease just past the great red hull of the freighter. As it did so, I made this photograph, creating a second comparison, this time a striking scale incongruity.
2 comments leave a comment 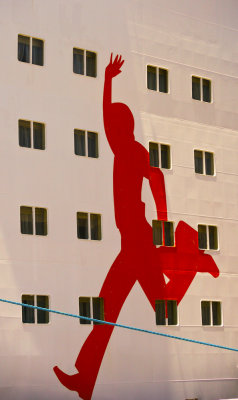 Hop, skip, and jump, Rio de Janeiro, Brazil, 2010
Just before our own cruise ship departed from Rio’s harbor, a huge Spanish cruise ship pulled in next to us, its sides decorated with incongruously gargantuan painted figures of happy vacationers. Standing on the pier, I moved in on one of those figures, using a 24mm wideangle focal length. The four deck high figure appears to be leaping in joy. It has already jumped, and now must somehow leap over a rope that anchors the ship to the shore. By isolating the figure from the rest of the ship, I make it incongruous, and by including the rope that seems to block its path, I intensify the incongruous nature of this image.
0 comments leave a comment 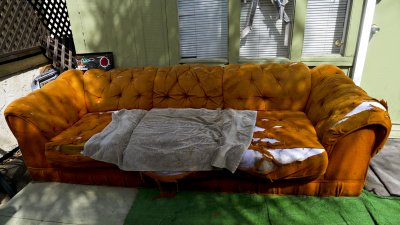 Orange couch, Mission Beach, San Diego, California, 2010
This couch has seen better days. It is not weatherproof either, yet it is parked outdoors on a green rug of artificial grass in the front yard of a beach cottage. I think the soiled towel protecting its battered cushions offers incongruous food for thought. Why is it there?
0 comments leave a comment