Tattoos new and used, Seligman, Arizona, 2006
Nobody buys cars in Seligman any more. This auto dealership has become a tattoo parlor, serving the bikers that often rumble along what is left of the abandoned Route 66. I was drawn to the scene by the incongruous juxtaposition of words -- both the old and the new.
To those willing to study details, there is still more incongruity awaiting them. The window sign itself becomes a pun, offering both “Tat” and “Toos.” A small collage of faceless bodies demonstrate the skills of the staff, and the prominent “Now Open” sign is contradicted by a padlock on the door.
8 comments leave a comment 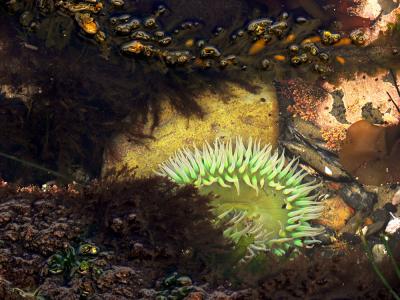 Florescence, Otter Crest Beach, DePoe Bay, Oregon, 2006
Many of the incongruous images in this gallery were the result of what I was able to do with the camera. Others, such as this one, are images of subjects that are simply incongruous in themselves. When I looked down into a tide pool at my feet and saw this huge florescent anemone suddenly emerge from beneath the kelp with flailing fingers, I was shocked to my core. I had never encountered such a sight before. All I had to do was to bend over and make this image, making sure that my angle of view stressed the emergence, rather than the whole anemone. It is this sense of emergence and the vivid green glow that gives this image its incongruous punch. I will never forget this moment, and I want anyone who looks at this image to share the feeling with me.
2 comments leave a comment 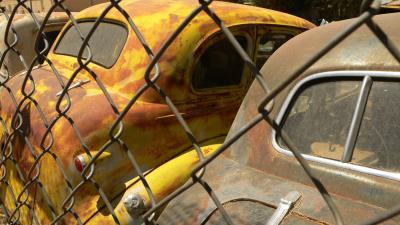 Precious junk, Phoenix, Arizona, 2006
The concept of a steel fence protecting what appear to be junked cars seems incongruous to us at first. By photographing these cars behind the fence, instead of inserting my lens into the fence itself to make the picture, I am asking the viewer a question. Why must junk, which seemingly has little value, be secured in this way? The answer must come in verbal context – these cars are apparently antiques that are waiting in this junkyard for restoration. They are thus more than junk. They are soon to become rolling history.
4 comments leave a comment

Double gulp, Scottsdale, Arizona, 2006
The iconic swan has a gracefully curved neck. But these swans are less than graceful as they search for a meal in the waters of a lagoon. By abstracting both of the heads, I double the incongruity – two underwater beaks are perhaps more efficient than one. Bubbles float among them, additionally incongruous evidence of swan breath. I compose the image by bringing in one swan from the upper left, the other from the upper right. Somewhere around the lower middle they must converge in common hunger. I leave the rest to the imagination of my viewers.
11 comments leave a comment 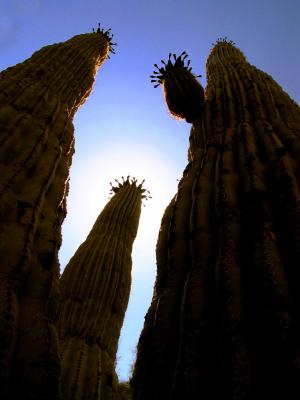 Giants, Phoenix, Arizona, 2003
The saguaro cactus, the single most famous plant we have here in Arizona, can grow as high as 66 feet. Its branches are shaped liked candelabra, and every May those branches sport a crown of blossoms. These branches are from a single saguaro that is growing only a few hundred feet from my home. It is centuries old, and I wanted to stress its growth and scale in an incongruous way. I place the afternoon sun directly behind one of its blossoming branches to create a halo effect. I use a low vantage point and shoot almost straight up into the heart of the cactus, making its branches seem more massive at the bottom than at the top. The sun abstracts the huge branches, stressing the blossoms, which are splayed like giant hands on each branch. This saguaro almost seems human, a giant gleefully celebrating life.
6 comments leave a comment 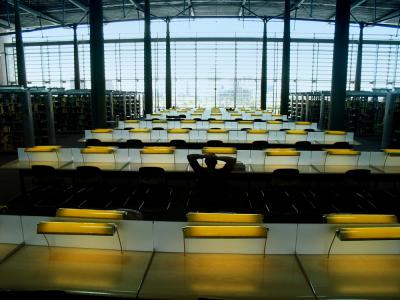 Dreamer, Phoenix, Arizona, 2003
I found this fellow relaxing at his desk in the reading room of a Phoenix library. By photographing him from a distance, and by shooting into the vast window at the end of the room, I make him seem incongruously small in comparison to the vast space he occupies. My vantage point also allows me to abstract him as a silhouette, making him unidentifiable -- a universal statement of relaxation. He gazes towards the distant city, perhaps dreaming with his eyes wide open, a study in scale incongruity.
6 comments leave a comment 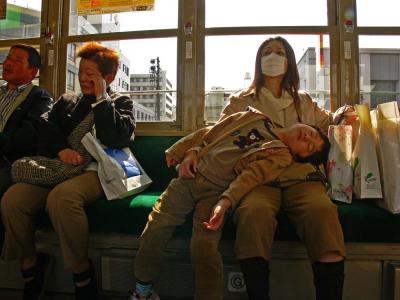 Streetcar riders, Hiroshima, Japan, 2006
This child has fallen asleep in an incongruous posture somewhere between standing up and lying down. His masked mother (many Japanese women wear masks as a health measure) appears to be oblivious to his awkward position. The other riders are not concerned either – they have their own cares. The boy’s mother is multi-tasking – not only supporting his weight, but also holding on to the straps of three shopping bags.
All of these elements express incongruous appearances or relationships and give this image its value as expression.
8 comments leave a comment 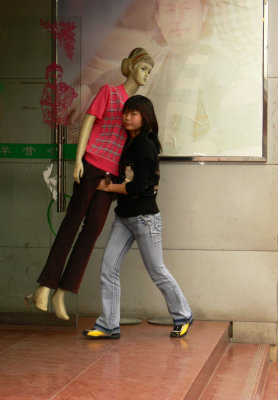 Clothing store, Guilin, China, 2006
A mannequin provides the incongruous element here. The young woman lifting the mannequin off the ground appears to consider it just so much dead weight. Even though she is shorter, she makes the job look easy. This size variation, as well as the indifferent expressions on both the mannequin and woman, gives this image its incongruity. The woman looks at us, and not the mannequin, which bring us into the picture. The ghostly figure of man in the frame on the wall adds a final surrealistic touch to the photograph.
6 comments leave a comment

Buffalo, Taketomi Island, Japan, 2006
It is not often one sees a buffalo with a red flower behind its ear. It seemed like a perfect Japanese touch to me, and a highly incongruous one. I stress the incongruity by lowering my camera down to eye level with the buffalo, which is used to haul carts full of tourists around the island. It confronts us with its huge horns, yet the horns are made to seem
incongruously harmless with that red flower.
10 comments leave a comment 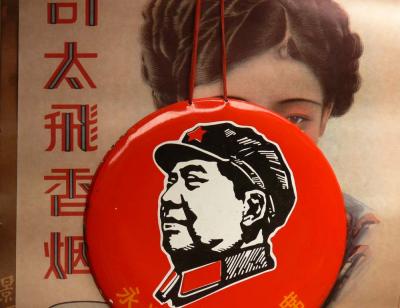 Clashing portraits, Shanghai, China, 2006
A huge Mao button can't quite hide the allure of a vintage advertisement on the wall of an Old Shanghai antique stall. The two portraits superimposed upon each other almost randomly make an incongruous match. The Mao button abstracts the face on the ad as well. All we see of it is the eye peeking out at us. The scale, colors, styles and the genders clash, and so do the ideologies. Mao did not approve of capitalism, and that is what advertising is all about.
8 comments leave a comment 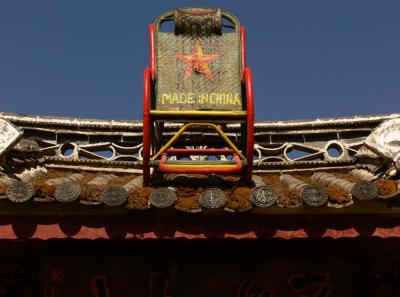 Emphatic origins, Shuhe, China, 2006
This shop makes no secret of where its goods are manufactured. The rocking chair on the roof is incongruous placement. The slogan on the chair is incongruously scaled. The style of the roof is classical, the chair commercial. The primary colors of the chair are far from the muted colors of the roof. The image, just as the real thing, shocks, amuses, and makes it very clear who makes most of the stuff in our world.
4 comments leave a comment 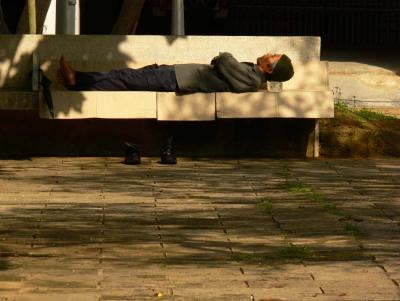 Park bench, Naha, Okinawa, Japan, 2006
This man has carefully lined a stone bench in Naha’s Matsuyama Park with cardboard, removed his shoes, and placed a bottle beneath his head. He sleeps soundly. His posture, the precise care he as brought to his comforts, the use of a hard bottle as a pillow, and the formal precision of the picture’s composition are all incongruous. The warm morning light adds an incongruous setting for such sadness. In fact, my initial thought upon seeing this man for the first time was that he had died and his body was laid out for public viewing. In short, this image presents what appears to be homelessness as ceremony – certainly an incongruous premise.
6 comments leave a comment