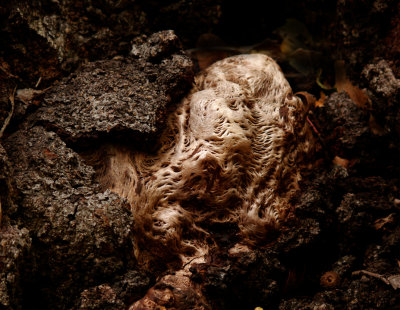 Aged burl, Oak Creek Canyon, Sedona, Arizona, 2006
It’s only a piece of old wood by the side of a trail following the meandering of
Oak Creek, yet I’ve photographed it at very close range to reveal what looks like a brain emerging from ancient rocks. It is startlingly incongruous, not what we’d expect to find while taking a hike along a creek. Using a spot meter on the light colored wood, I’ve underexposed this image to abstract it, making it seem something other than what it really is.
6 comments leave a comment 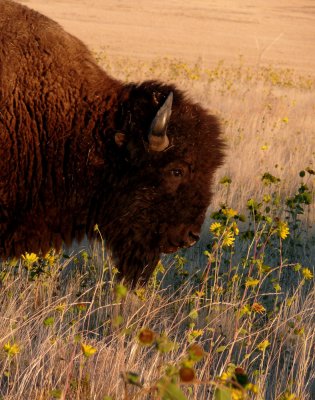 Bison and wildflowers, Antelope Island State Park, Utah, 2006
The bison is massive; the tiny flowers he is grazing on are frail. I was able to get this bison’s nose within a few inches of the flowers. It was as if he had just stopped to smell them. The concept of a huge bison smelling a tiny bunch of flowers is incongruous, a quirk of nature. His expression seems thoughtful, almost to the point of pleasure. Do bison enjoy the scent of flowers? This image asks the question, and we must supply the answer.
12 comments leave a comment 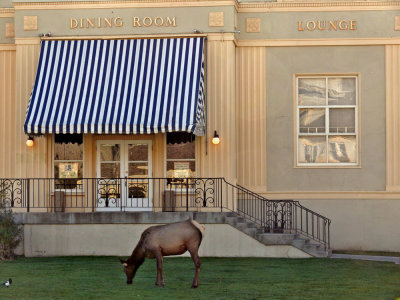 Dining room, Mammoth Hot Springs, Yellowstone National Park, Wyoming, 2006
There are elk grazing all over the tiny town of Mammoth Hot Springs. I saw this female enjoying her lunch just outside of a restaurant next to our hotel. I included the sign on the façade of the building to make the image incongruous. While humans dine inside, the elk does likewise on the other side of the door. (The food chain continues – a tiny magpie waits for its share at the lower left edge of the frame. I did not notice its presence until much later. Birds dine on insects that are attracted to the elk.)
4 comments leave a comment 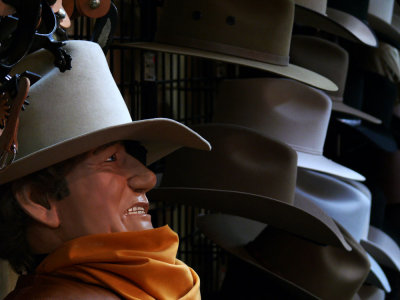 Stetsons for sale, Kanab, Utah, 2006
A life-sized mannequin of the late movie star John Wayne relaxes among the Stetsons in the hat department of the largest tourist shop in Kanab. I made this image from the side, strengthening the incongruous relationship between the Stetson pulled low over the eyes of the ersatz Wayne, and the stacks of Stetson awaiting buyers. I’ve even included a batch of spurs next to the crown of Wayne’s hat to add the flavor of the Old West to the image.
4 comments leave a comment 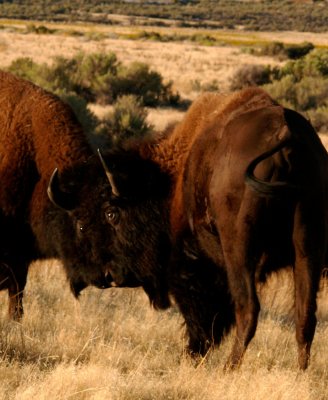 Eye to eye, Antelope Island State Park, Utah, 2006
I caught this pair of jousting male bison doing a bit of casual head butting. The more I look at this image, the more incongruous it becomes. The catchlights in the eyes dominate the scene and tell the story. Each animal seems to be looking elsewhere, as if this sparring match is a sideshow. The heads merge – asking us to consider where one bison ends and the other begins.
4 comments leave a comment 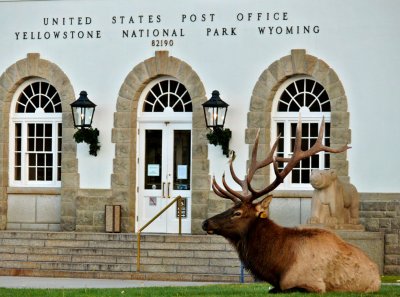 Catching a break, Mammoth Hot Springs, Yellowstone National Park, 2006
Only moments after an energetic mating session (click on thumbnail below ), a magnificent male elk incongruously takes a rest on the lawn of Yellowstone’s main post office in Mammoth Hot Springs. To add to the incongruity, the elk ignores the presence of the stylized statue of a bear just behind him, while the lanterns over the doors of the post office echo its rack of antlers. The tag in his ear helps rangers monitor his whereabouts. 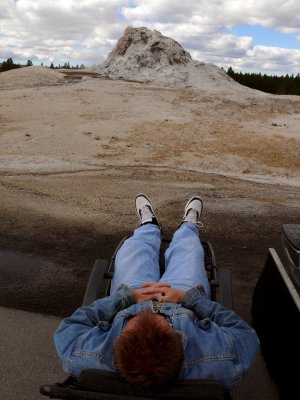 Waiting, White Dome Geyser, Yellowstone National Park, Wyoming, 2006
Geyser watching at Yellowstone is a spectator sport. It takes a lot of patience. One never knows when nature will take its course and send steam and water erupting into the sky. I found this geyser-watcher relaxing in his camp chair, his eyes trained on the softly steaming hulk of White Dome. My overhead vantage point stresses his patience – he could be there for another hour before it erupts. Actually, the geyser erupted while I was still photographing him, but those images were not nearly as incongruous as this one because once the geyser went to work, all the passive contrast between the watcher and the watched vanished.
2 comments leave a comment 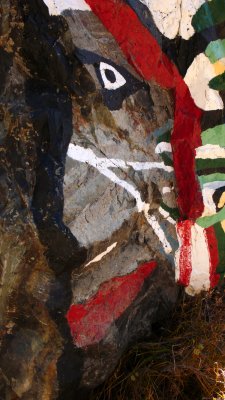 Boulder art, Lundy Lake, California, 2006
A local artist painted the gaudy face of an Indian on a huge boulder by the side of a dirt road not far from Lundy Lake. As I photographed it, I noticed that as I changed my vantage point, the face itself changed from a description to an abstraction, making it incongruous in the process. This image was made with a 28mm wideangle lens from straight on, leaving the left portion of the image as boulder, and the right portion as face. If we study the image closely, we can see the face looking directly at us. Or we can imagine it in profile. To some, it might appear to be primarily a hodgepodge of color, and not an Indianhead at all. The white war paint bisects the image, abstracting the photograph to create an incongruous feast for the imagination.
0 comments leave a comment 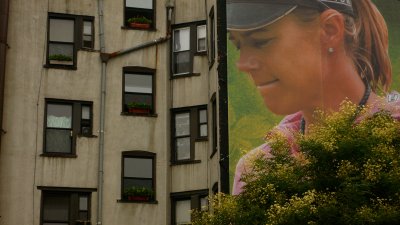 Urban golf, Houston Street, New York City, 2006
This image offers us a triple dose of incongruous juxtapositions. The head of a famous golfer fills two stories of an apartment building. She emerges from the top of a flowering tree, and gazes into mysteriously sealed windows. By isolating these juxtapositions within the frame of my camera, I take all of these elements out of their normal context, creating an image that is ultimately more surreal than real. Scale incongruity, subject incongruity, and contextual incongruity run simultaneously through this image. The head is part of a billboard promoting an upcoming tournament featuring Annika Sorenstam, the most successful performer in women’s golf. I cropped out all the words, and most of Sorenstam along with them. I moved my vantage point so her head pops out of the tree that fills the lower right hand corner of the frame. All of which leaves half the image for context – an array of closed windows. Sorenstam, who was probably pondering a tricky putt when the golfing image was made, seems to be thinking more about what might lie within those mysterious windows, and less about putting the ball into the hole.
16 comments leave a comment 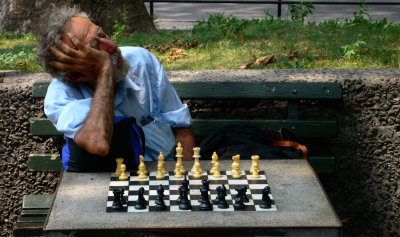 Asleep at the board, Washington Square Park, Greenwich Village, New York City, 2006
Chess is a game of the mind. But not when that mind is shut down. The board is ready for the first move. Yet the opponent is missing and the player is sleeping! To make this incongruity work, we must be sure that this man is actually a chess player. I had no way of knowing. I couldn’t ask him. So I made this photograph and allow my viewers to decide. It is also entirely possible that this man may live in the park, and was simply asked by serious chess players to hold the board for them while they went to lunch. And this is how he holds it? If such are the facts, then we still have an incongruous image here. One does not usually lay claim to a chess board while sound asleep.
UPDATE:
More than a year after I made this image, I received an email that provides profound and fascinating additional context. Read the following words and look at the image again. It becomes even more incongruous, and its meaning changes as well. Here is the message in its entirety:
"Hello, Mr Douglis:
That man on your picture which was taken in Washington Square Park is a real chess player.He is a Russian national master and chess teacher. Current status-homeless. He is known for his strong, professional game style with ELO rating around 2200.That's why he dosn't have so many opponents at his table.Most of the players just don't want to play chess with him, because it feels like playing deep fritz. Your photo shows that his eyes are shut, but his mind is on ''stand by'' mode, ready to go at any moment.
I hope that information will be helpful for your gallery data.
Sincerelly,
Zbig Kuczek" 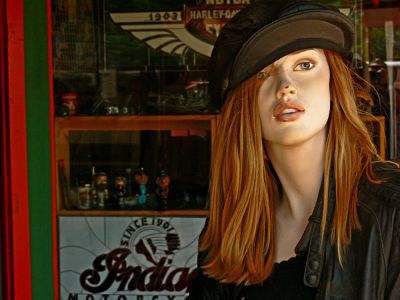 Mute welcome, Seligman, Arizona, 2006
Seligman's biker's shop is a popular gathering place. Perhaps it's because the clientele enjoys bantering with this hostess who sits just outside the shop, never moving her lips in return. (The chipped nose and stylized teeth give her away.) This image is a good example of incongruity that confounds our expectations. Her appearance is startling, so natural, and yet also quite dead. Our imaginations can take it from there.
6 comments leave a comment 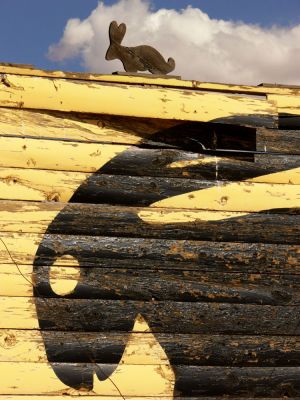 The Jackrabbit, Joseph City, Arizona, 2006
The Jackrabbit Trading Post was built in 1949, catering to post World War II travelers driving along the now abandoned US Route 66. Located between Winslow and Holbrook, Arizona, it is still in business, and best known for a series of huge highway signs featuring a giant jackrabbit and a row of smaller rabbits up top offering additional embellishment. The final sign proclaims: "Here it is.” I turn the sign into an example of pure scale incongruity by abstracting it, including only the head of the giant jackrabbit and only one of its tiny companions. My close-up vantage point also reveals the wear and tear on the billboard. It has been doing its job for many years now, and judging from the crowds in its gift shop, it will continue to attract tourists traveling on US Interstate 40, which runs parallel to the remnants of Route 66 across Northern Arizona.
6 comments leave a comment