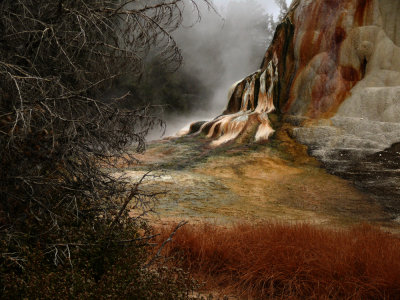 Colors, Mammoth Hot Springs, Yellowstone National Park, Wyoming, 2008
This hot spring is one of the ten thousand thermal features that make Yellowstone unique. This travertine stone is in the process of getting larger – it grows up to two feet a year. The key to its beauty is its color, and its incongruous melting pattern, as well as the color of its surroundings. I built this five-layer image around the layers of color that flow within the frame. My foreground layer is dominated by rust colored vegetation. I connect this layer of red vegetation to the rust colors on the rock, with a transitional layer made up of yellowish brown earth in the center of the image. Two other layers surround this transitional layer – the green tree on the left side of the frame, and the atmospheric steam rising from the earth in the background. If we look at the structure of this image as a “C” shaped flow made up of red vegetation, green vegetation, steam, and rust colored rock with oozing limestone, we can see how important that transitional layer of earth in the middle of the “C” is to the composition. It links color to color and at the same time, creates a sense of depth perception.
0 comments leave a comment 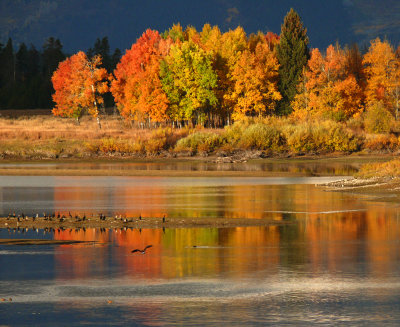 Autumn, Oxbow Bend, Grand Teton National Park, Wyoming, 2008
There are six layers in this image, glued together by a transitional layer of reflected color. The small island in the middle of the Snake River is crowded with geese. On either side of that layer is water shimmering with the colors of the reflected autumn foliage in the background. This transitional layer links the horizontal flow of water at the bottom of the image to the horizontal flow of the island, the horizontal layer of water between the island and the bank of the river, the bank of the river itself, the horizontal stand of trees that change with the season, as well as dark background layer at the top of the frame. Bringing energy to all of these layers is a goose stopped in flight, which I’ve superimposed on the transitional layer of reflection in the water.
4 comments leave a comment 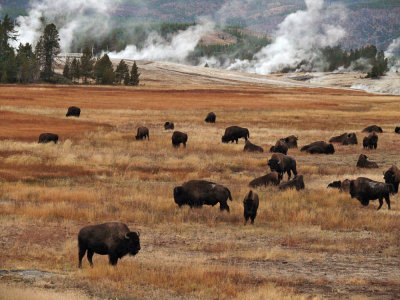 The herd at Old Faithful, Yellowstone National Park, Wyoming, 2008
There are thousand of bison roaming Yellowstone. I’ve included about thirty in this image, grazing on the plain just in front of Old Faithful Inn. In the background, we see the thermal features creating plumes of steam along the Firehole River. The bison in the foreground stands alone. Because it is the closest to me, it is large than the rest. I use it as to anchor my image. Just behind this foreground layer is the rest of the herd – my transitional layer. The smaller bison contrast in scale to the large bison in the foreground, as well as carry the eye back into the image towards the empty plain and the steaming ground that make up the background layers of this image.
0 comments leave a comment 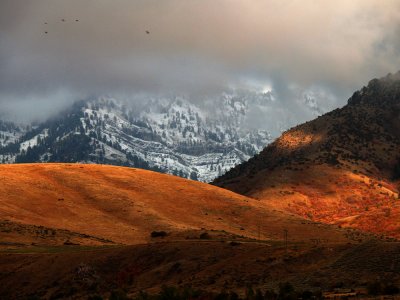 Winter landscape, near Logan, Utah, 2008
This image is made up of four simple layers – the dark shadow created by clouds blocking the sun that runs across the bottom and up the right hand side of the image, the reddish orange hills in the center of the frame, the snow covered side of a mountain in the background, and the huge cloud that hangs across the top of the image. The colorful hills make up the transitional layer here. They emerge from the shadows at the bottom and contrast to the snowy landscape just behind them. The cloud at the top offers a distant echo of these hills because it reflects a tinge of sunlight. There are also five tiny geese within that cloud, adding a touch of scale incongruity to the image.
6 comments leave a comment 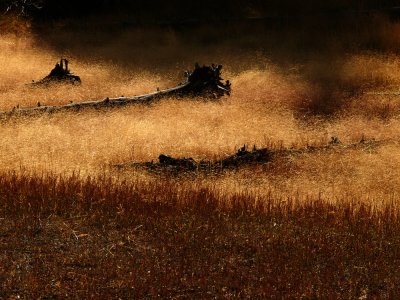 Gift of fire, Yellowstone National Park, Wyoming, 2008
Twenty years after forest fires swept through Yellowstone, we still see evidence of their destructive force. These charred tree trunks lie in the golden grass near the thermal basin at the West Thumb of Yellowstone Lake. Fire does more than destroy, however. It rejuvenates, encouraging new growth wherever it burns. The dead trees seem to float on a field of gilded life. Dark shadows flow across the bottom and top of the image, creating layers that are linked by the golden transitional layer in the middle of the frame. And within that transitional layer rests the subject itself, both the residue and the gift of fire.
0 comments leave a comment 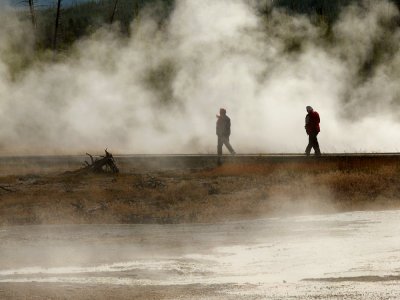 Grand Prismatic Spring, Yellowstone National Park, Wyoming, 2008
The message of this image comes through the spacing and body language of the silhouetted figures walking through this, the largest hot spring in Yellowstone Park. Fittingly, these people also provide the transitional layer for this image. They link the layers of water and grass that take up the bottom half of the image, with the steam and abstracted forest that make up the top half of the image and gives this place its identity. Their dark tone extends the darkness of the grass up into the rising columns of boiling steam. They keep just enough distance between each other to provide a sense of privacy while walking through a magical place. The man at left trails his leg behind him and seems to wear a flapping scarf. The woman at the right bends her head and body to the left while striding through the steam. Do they know each other or are they complete strangers? Ultimately, whether linked or not, they do join together to create a transitional layer linking the water and land below them to the steam that rises above them.
0 comments leave a comment 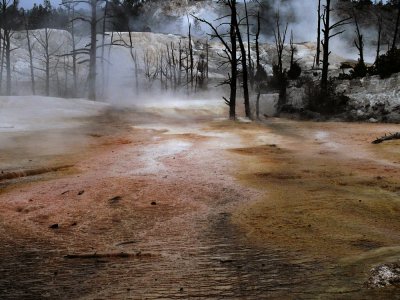 Thermal Forest, Mammoth Hot Springs, Yellowstone National Park, Wyoming, 2008
Most of this image occupies the foreground layer of colored rock and soil that makes up a thermal feature. As it flows towards the trees, the ground becomes wet, finally turning to glistening water. From here, the image transitions into the trees, steam and snow that fills the top layer. The texture changes from rough to smooth, while the color moves from brown to white, culminating in a transition layer triggered by the first stand of trees that enters the image at right. Transitions sometimes may be abrupt. This one, however, is gradual. There are two different worlds in this photograph, yet they flow seamlessly into each other at the point of transition.
6 comments leave a comment 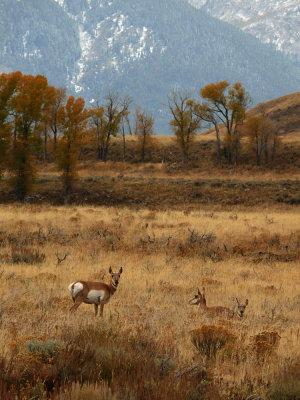 Pronghorn Antelope, Grand Teton National Park, Wyoming, 2008
Three female pronghorns occupy a multi-layered space that begins on the plains and concludes in the mountains. All of these layers are horizontal, stacked upon each other within a vertical frame, which builds tension and helps push the eye from bottom to top. The image speaks of both these antelopes and their environment, which ranges here from chaparral to alpine. The upright ears of the antelopes echo the upward thrust of the trees in the distance. There are two transitional layers in this image. The antelope themselves are transitional, standing within the broadest single area of ground in the photograph. Their grass is brown, while the grass immediately before them and behind them is green. These layers represent their food supply. Four horizontal layers of green grass alternate with four horizontal layers of brown grass. The trees elevate the areas of green upward, providing another transitional layer that links the antelopes and plain before them, to the mountains that soar behind them.
0 comments leave a comment 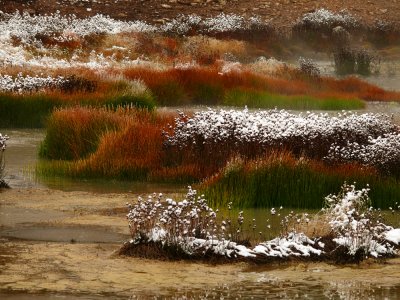 Life in the Mud Volcano, Yellowstone National Park, Wyoming, 2008
Yellowstone’s thermal fields seem to echo not only life’s first appearance on the planet, but its early development as well: steaming hot water bubbling from the earth bringing forth organisms metabolizing oxygen. Scientists call such organisms aerobic. As water flows from Yellowstone’s hot springs, mats of color appear. These are colonies of bacteria and algae, which eventually host still other living organisms such as delicate, colorful plants. Their ancient ancestors generated the atmosphere we live in. Here, at the bizarre Mud Volcano, the remains of a giant conical mudpot that blew itself up in the 19th century, we see this process still at work. Layer upon layer of plants emerge from the warm mud, dusted with light snow, like sugar on a cake. The horizontal white bands alternate with the red and green bands. Each band of snow serves as a transition point from color to color. The white powdered plants move us through the entire picture, as they reveal the layers of color that lie within them.
10 comments leave a comment