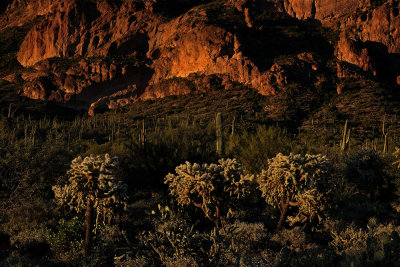 Desert rhythms, Peralta Canyon, Arizona, 2014
I wanted to give this image a sense of perspective and depth by unifying three distinct horizontal layers into a cohesive landscape. With this objective in mind, I built the base layer around three rounded masses of cholla cactus. I arranged these shapes horizontally, in order to rhythmically repeat the rounded masses of golden mountain stone in the background. My middle layer features a field of saguaro cactus that flows horizontally across the entire frame. The vertical thrust of each saguaro repeats rhythmically throughout the middle layer, and the saguaros also mimic the vertical slashes of mountain rock appearing in the background layer. This background layer paints the entire top portion of the frame with the reddish gold colors of sunset, contrasting boldly to the field of green vegetation spreading before it.
0 comments leave a comment 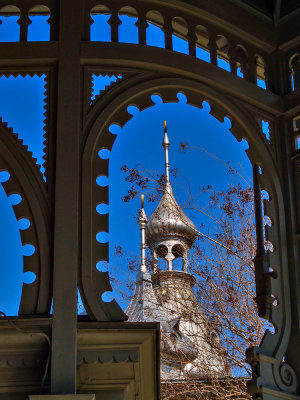 Moorish elegance, University of Tampa, Tampa, Florida, 2013
This extravagant 125-year-old ìMoorish Revivalî building was once the most elegant hotel in Florida. Known as the Tampa Bay Hotel, railroad tycoon Henry B. Plant built it to lure widely traveled Victorians on to his trains bound for Tampa. It was the first hotel in Florida to have an elevator, and its rooms were the first in the state to be equipped with electric lights and telephones. Teddy Roosevelt and his Roughriders trained here during the Spanish-American War, and Babe Ruth hit his longest home run ever at a stadium once located on the hotel grounds. The hotel closed in 1930 and in 1933 it became part of what is now the University of Tampa. I photographed one of its many Moorish domes by layering it within the intricate latticework of the buildingís ornate front porch.
0 comments leave a comment 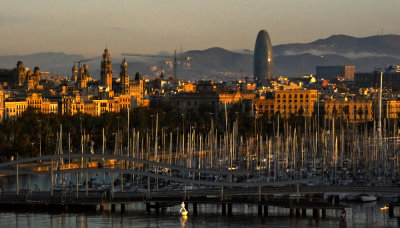 Dawn, Barcelona, Spain, 2011
A layered image is most effective when the elements in the different layers echo each other. Such is the case in this image ñ it begins with a small buoy at the bottom edge of the image, which is the brightest spot in the photo. It is small but striking, drawing the eye to its vertical shape. It points directly to the forest of sail boats anchored just behind it. The boats are darker than the buoy, yet the tips of their masts catch the dayís first light, and replicate the buoyís verticality. The masts in turn lead to the prime layer ñ the city itself, and its cluster of golden 19th century buildings. These towers echo the sailboat masts, while the 38-story Agbar Tower, resembling a huge vertical pickle, incongruously dominates the image. The final layers of this cityscape carry the eye into the fog-shrouded hills in the background, and then to a clear morning sky.
6 comments leave a comment 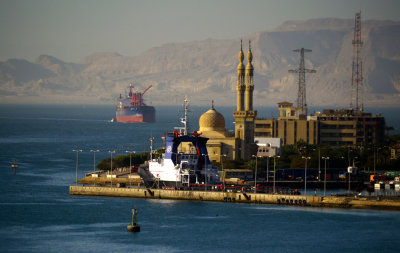 Morning at Suez, Egypt, 2011
Suez is a seaport on the north coast of the Gulf of Suez, near the southern end of the Suez Canal. This city of 500,000 is an important way station for Muslim pilgrims travelling to and from Mecca, and also was a flash point in the on-going Egyptian revolution. I photograph our passage through Suez here in layers, building the image around the vertical thrusts of its mosque, and well as its power and communications towers. The buoy in the foreground launches the flow of layers from front to back, while the stacks on the approaching tanker, as well as the mountains in the background, complete them.
0 comments leave a comment 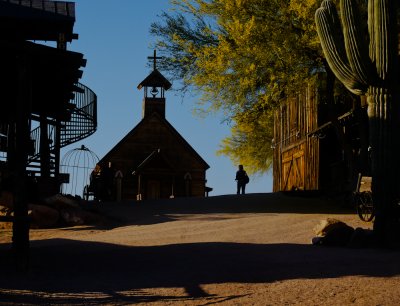 Goldfield Ghost Town, Goldfield, Arizona. 2011
Todayís Goldfield is a recreation of the actual gold mining town that stood near the beginning of the Apache Trail, in Arizonaís Superstition Mountains. The original town thrived from 1893 to 1898, and when the gold ran out, the desert took over. It rose again in 1921, when new mining methods brought forth additional gold. Eventually the ore finally ran out in 1926, and the town was left to decay for another 60 years. About twenty-five years ago, a commercial recreation was built as a tourist attraction on the ruins of the vanished town. Today, it is filled with individual shops, occupying authentic copies of the old buildings. We arrived an hour before sunset, just as the shops were closing. We virtually had the town to ourselves -- an old Western stage set bathed in warm evening light.
Iíve used layering to gradually build a sense of place in this image. I include alternating layers of light and shadow on the dirt road that lead us through the picture, and towards the town church at the rear. I silhouette a spiral staircase and a ìbird cageî jail on the left, a layer that leans in the direction of the church. I include a saguaro on the right edge as a framing device, leading the eye towards the middle layer ñ an old barn, glowing in the setting sun. A pbase photo colleague from Malaysia, Celia Lim, was also working the scene, and I waited for her to move past the barn and walk below the huge tree that adds bulk to the middle layer. Celia becomes a layer unto herself, a silhouette urging us to follow her towards the final layer ñ the church itself.
0 comments leave a comment 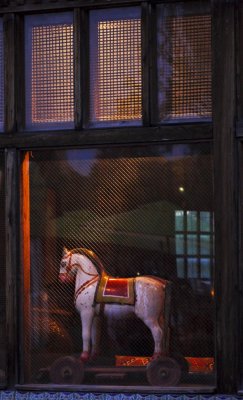 Hobbyhorse, Santa Fe, New Mexico, 2010
I photographed this hobbyhorse five years earlier ( http://www.pbase.com/image/46539497 ) as part of an atmospheric early morning Santa Fe street scene. I returned in 2010 to make this image on a summerís evening. This time I move in, and shoot just one of them, instead of four. It is now turned sideways in the window, and I frame the scene within a series of rectangular windows. It becomes a heavily layered image in the process. The first layer is a screen that restrains the horse, symbolically keeping it from going anywhere, a layer that is stacked with a set of three more screened windows crowning the scene. The hobbyhorse itself, resplendent in its evening coloration, provides the second layer, the focal point of the image. A third layer, a window filled with greenery in the rear of the shop, pulls the eye into and through the scene, and prods the imagination to wonder what might lie beyond.
0 comments leave a comment 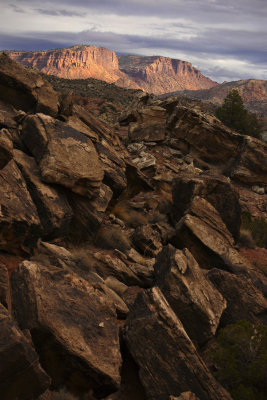 Upheaval, Arches National Park, Utah, 2009
Natureís geologic upheaval provides its own layering here, and I use it to layer my view of the massive bluffs along the Colorado River that define the borders of Arches National Park. There are three layers that give a sense of depth perception to this image. The prime layer fills most of the frame ñ a striking jumble of slabs piled upon each other by the movement of glaciers long before there was a place called Utah. The distant bluffs tower above them, adding the brightest layer of color to the image. Textured clouds provide the final layer, capping the image.
0 comments leave a comment 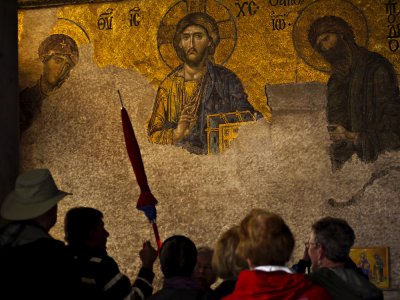 Deesis Mosaic, Hagia Sofia, Istanbul, Turkey, 2009
Discovered beneath layers of plaster in 1934, the Deesis Mosaic is one of the most important works of Byzantine art. Every tour visting the 1,500 year old Hagia Sofia, the greatest cathedral of its time, stops before this astounding mosaic and stands awestruck before it. In this image, I place the mosaic, which dates to 1261, into the background, and use a tour group as my foreground layer. I waited for the tour guide to raise his red umbrella to point out a detail and then made this photograph. The figures in the mosaic express a profound sense of spirituality, and herald a new epoch of Byzantine art. The red umbrella hanging in the air before those figures seems to energize the scene and puts it into a contemporary context.
4 comments leave a comment 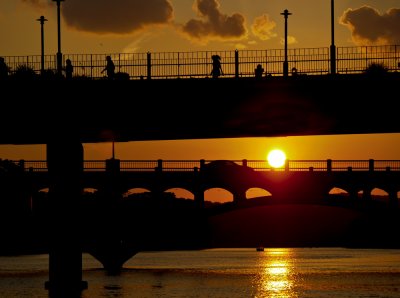 Layers at sunset, Lady Bird Lake, Austin, Texas, 2009
While in Austin, we took a sunset cruise along Lady Bird Lake, passing below the numerous bridges that tie the halves of Austin together. I was able to fill my frame here with four simultaneous layers of content: abstracted pedestrians walk across the bridge on the top, while a car moves across another bridge in the middle, a boat slides along a shimmering band of golden reflection at the bottom, and the setting sun itself, joined by backlit clouds, fills the background.
6 comments leave a comment 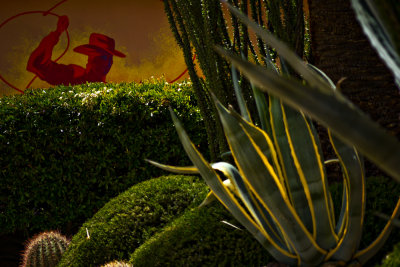 Lasso, Wickenburg, Arizona, 2009
Wickenburg, only 45 miles outside of Phoenix, was founded as a gold mining town during the civil war, and eventually became the Dude Ranch capitol of the United States. Many of its original commercial buildings still stand, but as in many western towns, they have been gentrified to attract the tourist trade. I walked around the town for an hour and found this single image, which expressed the essence of the place for me. A painting of a stylized cowboy in action fills an entire blank wall on the side of a souvenir shop. Recognizing its potential as my fifth and final subject layer, I walked a block further, passing along the side of a church with elegant western landscaping. I turned and framed this landscaping in varying degrees of focus: a soft Yucca in the first layer, a rounded hedge as a second layer, and a small cactus as the third layer. The high hedge, which makes up my fourth layer, abstracts much of the cowboy. Only his head, arm, and lasso, painted in fiery red colors, can be seen. It was enough to encompass the essence of 21st century Wickenburg.
12 comments leave a comment 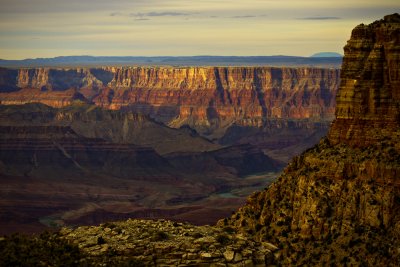 Evening at the canyon, Grand Canyon National Park, Arizona, 2009
I build this Grand Canyon evening vista around four successive content layers. The foreground layer features the massive, rock-strewn bluff protruding into the canyon on my right. It provides dimensionality ñ depth perspective ñ to the scene. The middle layer is a transitional layer ñ shadowy buttes on the canyon floor, linking the foreground to the subject layer itself: the North Rim of the Grand Canyon, gilded by a very brief appearance of the setting sun through the evening overcast and haze. The fourth and final layer is the background layer -- the rolling hills that top the North Rim, and the evening sky, streaked with clouds, just overhead.
4 comments leave a comment 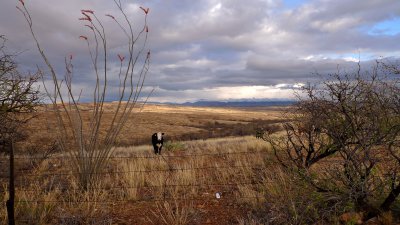 Confrontation, near Arivaca Junction, Arizona, 2009
A herd of dairy cows had been grazing as we pulled up. By the time we got out of the car and over to the fence, only one of them remained. It steadfastly stared us down, daring us to get closer. Of course we had to stay we were. A layer of barbed wire stands been us and the cow. Just in front of the fence is a twisted bush, and just behind it stands an Ocotillo, its red blossoms waving in the spring winds. The cow is actually very close to us, but my 24mm wideangle lens makes it smaller, linking it to the vast landscape that sweeps towards the storm clouds on the horizon. I count at least six significant subject layers in this photograph, giving it the illusion of depth, creating scale incongruity, and eventually opening up to a grand vista.
2 comments leave a comment