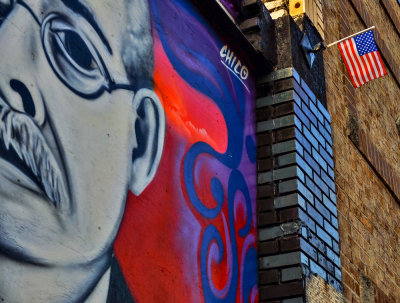 Living history, Ybor City, Tampa, Florida, 2013
Ybor City is a historic neighborhood just north of downtown Tampa. It was founded in the 1880s by a cigar manufacturer, and populated by thousands of immigrants from Spain, Cuba, and Italy who came to work in his factories. Following the depression of the 1930s, and the Second World War, Ybor City’s population dwindled and its cigar manufacturing ceased. After decades of neglect, the area is now being redeveloped as a nightclub and entertainment district.
Now a National Historic Landmark, Ybor City still honors its past, particularly its namesake, Vincente Martinez Ybor. A famous Cuban cigar maker, Ybor was expelled from Havana by the Spanish in 1868, and set up a cigar business in Key West, Florida. Once again, Ybor had to move, this time due to high costs, labor strife, and transportation difficulties. He ultimately established his cigar business in Tampa in 1886, and his “company town,” named Ybor City, became the world’s leader in cigar manufacturing.
This mural honors his legacy. I photographed only half of his face, suggesting that he may no longer be with us, but what he accomplished lingers in the collective memory of Tampa, Florida. I include a small American flag attached to the wall next to the mural in this image. Its red, white and blue colors echo those in the mural and even the blue bricks below it. My photograph turns the poster into political imagery – an example of living history linking Ybor’s efforts to the nation and city that would eventually come to benefit the most from his accomplishments.
2 comments leave a comment 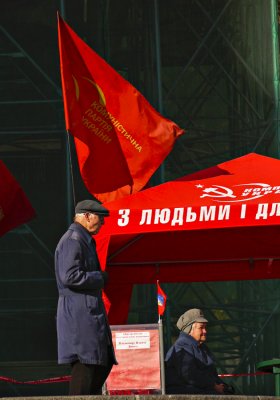 Communist party tent, Kiev, Ukraine, 2009
Ukraine is no longer a communist country, but the party still desires a voice in its affairs. Zealots were passing out information from a tent pitched at the base of Lenin’s statue, which is under repair and shrouded by scaffolding. The red banner still flies over two members who most likely recall headier times.
2 comments leave a comment 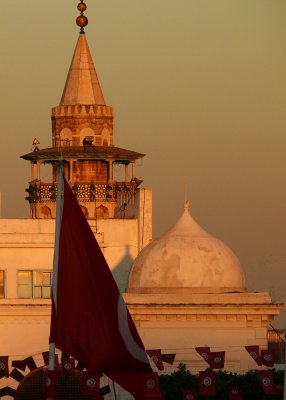 Mosque, Tunis, Tunisia, 2008
Religion plays a major role in the political landscape of any country, even those that proclaim separation of church and state. For example, the mosque is by far the most characteristic and often the most prominent structure in Islamic towns and cities. In Tunis, they dominate the medina, or old city.
In this image, I blend a political symbol -- the national flag of Tunisia, bearing the Islamic star and crescent -- with the dome and minaret of an important mosque. The golden light of evening adds a suitable spiritual dimension to the image, but the real meaning is in the symbolic linkage of the national flag and the religious structure.
2 comments leave a comment 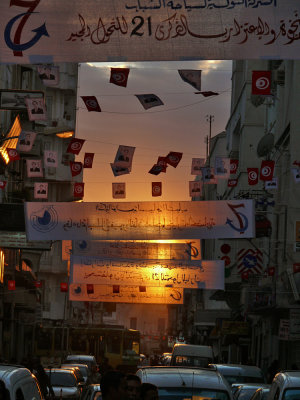 Street scene, Tunis, Tunisia, 2008
The main avenues of Tunis were bridge with signage proclaiming the twenty first anniversary of Ben Ali’s tenure as the country’s president. I don’t read Arabic, but I would expect these signs to speak well of the political and economic benefits of his reign. When we study this image in its detail, we note at least 17 images of Ben Ali himself, fluttering from the overhead wires along with Tunisia’s national flag. I positioned the setting sun behind the banners to stress the messages. Some might read the golden coloration as a symbolic tribute to Ben Ali’s regime, which has taken a pro-western stance and spurred a growing economy since the 1990s. (In early 2011, Ben Ali would be driven from office and into exile by a revolt.)
2 comments leave a comment 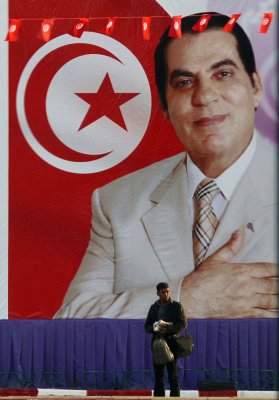 In charge, Tunis, Tunisia, 2008
I juxtapose a huge billboard, featuring the portrait of Tunisian president Ben Ali, against the figure of an anonymous Tunisian waiting for a bus or taxi. The president clasps his heart in a gesture of compassion, but the man below the billboard pays no heed. The scale incongruity of the image expresses my point – this president rules his country uncontested. In 1999, two alternative candidates were permitted for the first time to run against Ben Ali. He was reelected with 99.66% of the vote. In 2004, he was reelected again with 94.48 % of the vote. Asked to run again in 2009, he accepted.
In January, 2011, Tunisian president Ben Ali was driven from office by a mass revolt triggered by the social media. He fled to Saudi Arabia, and a new, presumably more democratic, regime took over the Tunisian government.
6 comments leave a comment 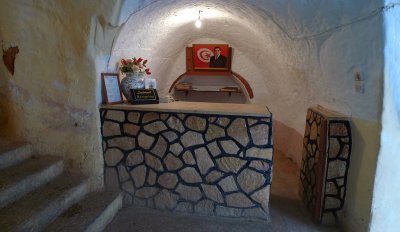 Hotel reception desk, Matmata, Tunisia, 2008
We briefly visited a Matmata hotel built into a series of caves – it was once used as a filming location for the first Star Wars movie. We did not find a receptionist at the desk. Instead, a portrait of Tunisian President Ben Ali, standing before the Tunisian flag, was there to greet us. The stone façade of the desk separates him from us. My wideangle image offers food for thought.
0 comments leave a comment 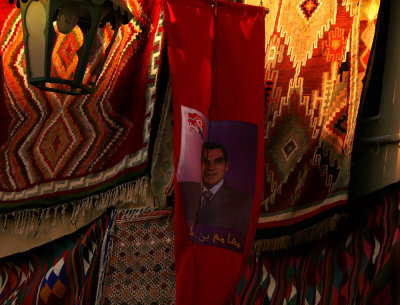 Amidst the carpets, Tozeur, Tunisia, 2008
I found a celebratory banner bearing the likeness of then Tunisian president Ben Ali incongruously tucked among the ranks of carpets for sale in Tozeur’s tourist market. The carpets are works of craftsmanship and art, reflecting ancient traditions of this North African country. The banner is a work of political iconography, celebrating President Ali Ben’s fourth (and last) consecutive five-year term as president.
0 comments leave a comment 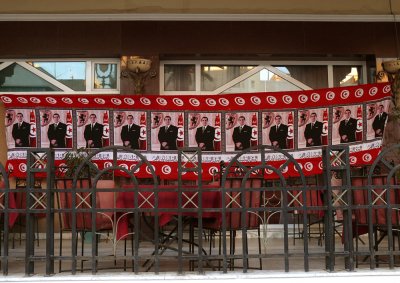 Eleven salutes, Sousse, Tunisia, 2008
Tunisia’s president appears eleven times in this single banner, an appropriate metaphor for his seemingly perpetual term of office. The country’s first president, Habib Bourguiba, won Tunisia’s independence from France in 1956, set up a strict one party state, and dominated the country for 31 years. Bourguiba was removed from office in a bloodless coup in November, 1987 and replaced by the man on this banner, Zine el Abidine Ben Ali. He was "re-elected" the year after my visit (2009), and driven into exile by a bloody revolt in January, 2011. I layer the image with a metal fence, an icon that speaks for itself as it adds context to the banner.
2 comments leave a comment 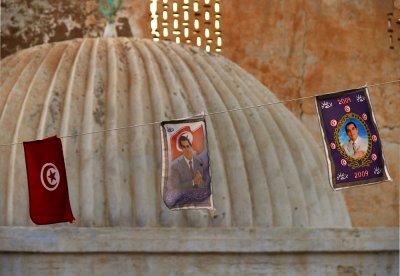 Church and state, Kairouan, Tunisia, 2008
The mosques of Kairouan attract pilgrims from around the Islamic world. The banners of Tunisia’s New Era Day flutter before one of them in this image. They bear the likeness of four-term president Ben Ali, whose government mandates separation between church and state. Islamic fundamentalism is not welcomed here. (Ben Ali would be ousted during his fifth term and driven into exile.) By overlaying the dome of the mosque with the political iconography of the president, I underscore this point.
0 comments leave a comment 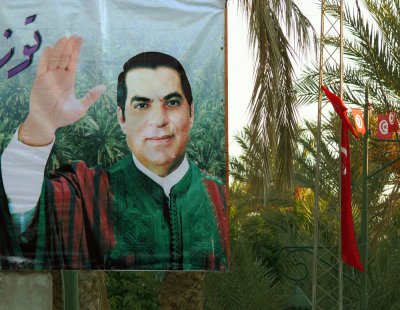 Tradition, Tozeur, Tunisia, 2008
Tunisia’s president Ben Ali (since deposed) is usually portrayed wearing western clothes. This large poster, which dominates a major intersection in Tozeur, shows him wearing traditional garments. It is a shift in political iconography -- an appeal, no doubt, to those Tunisians who cherish traditional values. His strategists portray him here as a man of all the people. It would be the people of Tunisia who would eventually drive him from office in a January, 2011 revolt.
0 comments leave a comment 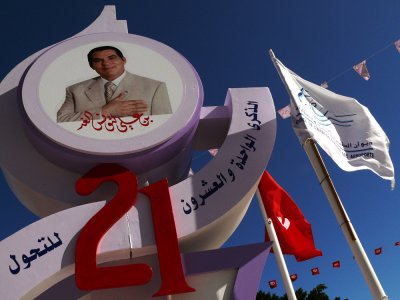 Twenty one years, Houmt Souk, Tunisia, 2008
The city of Houmt Souk celebrates its economic progress with this salute to the twenty-one year reign of president Ben Ali. This portable tribute was mounted on wheels and parked in the middle of the largest town on Tunisia’s heavily touristed Jerba Island. Jerba’s airport authority, a major player in Tunisia tourism, sponsored the display. I made this image from a low vantage point to elevate the political iconography stressing the primacy of the president. (The primacy ended in January 2011, when Ben Ali was forced to flee Tunisia by a popular revolt.)
0 comments leave a comment 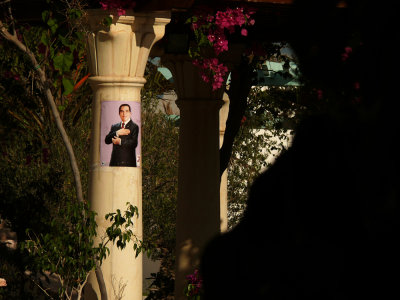 The pillar, Hammamet, Tunisia, 2008
A pillar is a symbol of strength, which is probably why the management of this hotel in the resort city of Hammamet used it to display a portrait of Tunisia’s own strong man, President Ben Ali. The president’s staged gesture is humble and straight forward, but the poster’s pillar placement makes it a statement of authority and power. (His portrait has since been removed. Ben Ali was driven from office by a revolt in 2011.)
0 comments leave a comment