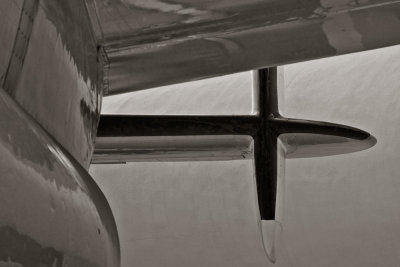 Remembering the Constellation's famous twin tail at the TWA Hotel, JFK Airport, New York, New York, 2019
I spent a day photographing the historic TWA terminal at JFK airport, a 1962 architectural gem recently configured as a hotel. A massive 1958 Lockheed Constellation plane, now a cocktail lounge, is parked just behind the terminal. Rather than photographing the entire plane, I started by abstracting the plane down to its most distinguishing characteristic, its famous set of twin tails. But I did not stop there -- I continued to abstract it down to just one of those twin tails.
The image becomes pure geometry. Segments of the plane's fuselage and wing frame the remaining tail, even slicing the top of it off. Yet the unique shape of that tail, forming a cross, retains its identity and symbolizes the essence of the Constellation. I converted the photograph to black and white, gave it a subtle sepia tint to suggest age, and achieved what I had set out to do.
0 comments leave a comment 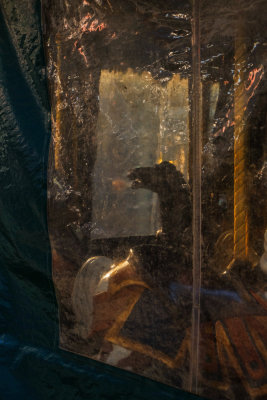 Le Carousel at dawn, Bryant Park, New York City, New York, 2013
By spot-metering on the early morning sunlight playing on the sheets of plastic covering this diminutive carousel, I was able to abstract this image by throwing much of the scene into shadow. The eye goes to the silhouetted horse in the middle of the frame. The puff of orange light seemingly coming from its mouth, along with the light crowning its head, bring it to life. The image conveys a dream-like mood, a nostalgic look back into another time.
11 comments leave a comment 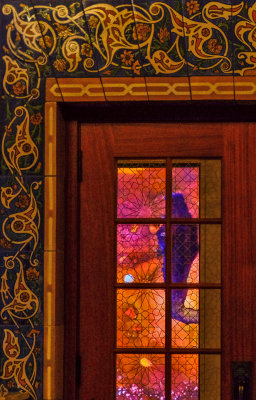 Theatre lobby, New York City, New York, 2013
I made this image from outside the theatre, pressing my lens close against a glass door to avoid reflections. I limited the image to the information within the ornate tiling around a door to an inner lobby. I built the image around the dazzling window within that door, an area full of of reds, oranges, and purples appearing almost as stained glass. The deep purple mass near the center of this colorful pane might represent a person – it is so abstract that it could also be simply an exercise in color. This image asks more questions than it answers, which is one of the principal functions of abstract photography. It is all about illusion, which also happens to be the essence of theatre.
2 comments leave a comment 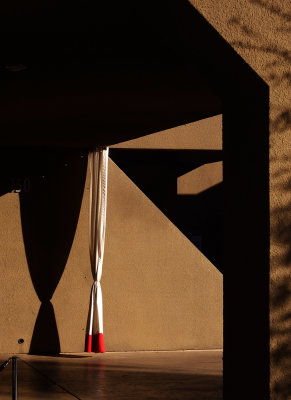 Hotel, Palm Springs, California, 2013
The geometric shadows cast by a hotel portico offers ideal subject matter for abstraction. However, I built this image around the single non-abstract subject in the frame – a furled red and white canopy. From there, I allow the interplay of shadows cast upon the hotel wall by the late afternoon sun to create a cubistic pattern. It features diagonal, horizontal and vertical thrusts, joined by the gentle curves of what seems to be still another shadowy furled canopy. These geometric shadows are all man made, yet nature plays a role here as well – note the feathery flow of a tree shadow bordering the image at the right edge of the frame.
0 comments leave a comment 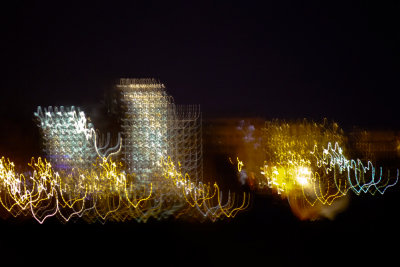 Cruise ship, Valletta, Malta, 2011
As our own cruise ship slowly made an evening departure from Valletta Harbor, I photographed another cruise ship still at the dock, using a very slow shutter speed of one and one third second. While the shutter was open, I moved the camera slowly up and down and from left to right, mimicking the motion of a ship. The ship, illuminated in hundreds of tiny lights, and several very large ones, becomes an abstraction, a study in motion, even though it is standing still.
4 comments leave a comment 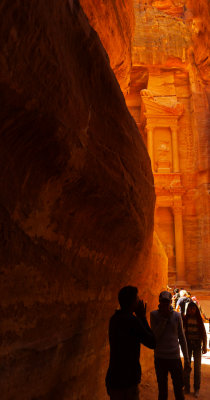 Entering Petra, Jordan, 2011
All visitors first view Petra through a 16-foot gap in the mountain gorge that concealed this ancient Nabataean city for 1200 years. I made this image from the seat of a horse-drawn carriage as it bounced its way along an original cobblestone road. The road was filled with tour groups, and I used members of one of them to good advantage here. As one man raised his hand to his head, he seems to be awe-struck. He and his friends are seen in silhouette, becoming abstractions that allow us to put ourselves in their place. We see only half of the iconic “Treasury” building that gives Petra its identity. By also abstracting this building, I allow the viewer’s imagination to picture the rest of it. The slice of red rocks that runs down the right half of the image takes on an unearthly glow, contrasting to the abstract shadowy wall that towers more than 600 feet overhead. It was almost impossible to stabilize the camera – the motion of the carriage was throwing it in two directions at once. However, my 1/500th of a second shutter speed was able to catch the moment I wanted – the first sight of a mysterious and fabled place.
2 comments leave a comment 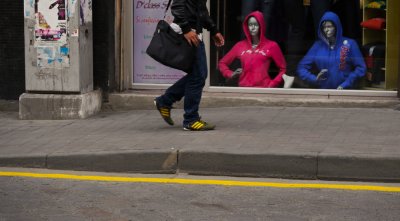 Primary Colors, Cuenca, Ecuador, 2011
I cropped off the head of the pedestrian in this shot to repeat the incongruity of the truncated mannequins displayed at street level. The image now flows horizontally by means of the repeating v-shaped leg angle of the pedestrian and the arm angles of the mannequins, as well as the four hands that echo that flow. The image also features the three primary colors: red, yellow, and blue. The yellow line in the street repeats the three yellow lines on each of the pedestrian’s shoes, while the red and blue sweatshirts worn by the mannequins dominate the image itself.
0 comments leave a comment 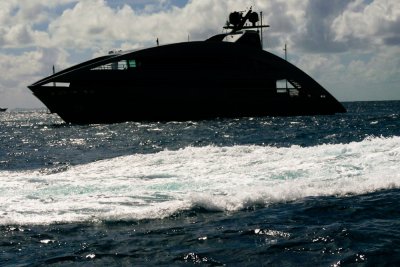 Stealthy yacht, St. Barts. French West Indies, 2011
This luxurious yacht, anchored off the Caribbean island of St. Bart’s on New Year’s Day was said to belong to a visiting Russian billionaire. I made its sleek design look menacing by deliberately backlighting it, abstracting it into a silhouette. I gave the anchored craft a sense of motion by waiting for another boat to pass in front of it, and then photographed its frothy wake.
0 comments leave a comment 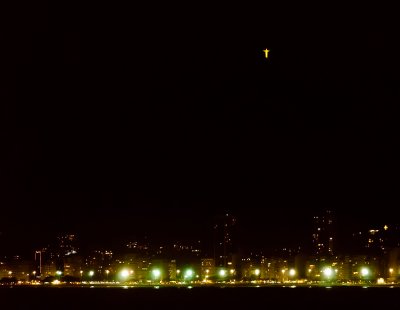 Nightfall, Rio de Janeiro, Brazil, 2010
I made this image from a moving cruise ship as it sailed out of Rio’s harbor after dark. Rio is visually “branded” by Paul Landowski’s 80 year-old, 130 foot tall art deco statue of “Christ the Redeemer,” which stands atop the 2,300 foot high Corcovado mountain overlooking the city and harbor. Using my spot-metering mode and an ISO of 8000, I exposed for the illuminated statue, allowing most of the city, and the dark mountain to vanish. By such abstraction, I was able to make the statue seem to float ethereally in the sky overhead, allowing the imagination of the viewer to fill in the details.
2 comments leave a comment 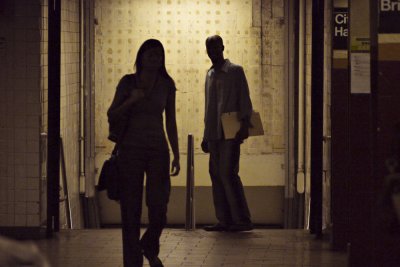 Subway encounter, New York City, New York, 2010
This fellow was blocking half of the stairwell to a platform at the City Hall subway station. He carried what looked like a clipboard and stood waiting for people to enter or leave the steps to the platform. He would nod to those who passed him, and if he caught their eye, he would say something. I do not know what he wanted – everyone who passed him ignored his request. I saw this woman approach and pass him as well, and caught the pair in silhouette the moment before he seems to be making a futile pitch from behind. The image is rich in tension because of the negative space that appears between the inside of the woman’s arm and her body, between the outside of her arm and the railing, and between the railing and the man. I abstract the scene by backlighting it, metering on the bright light over the steps and throwing everything else into silhouette.
4 comments leave a comment 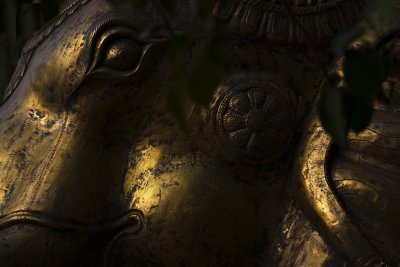 Brass Elephant, Santa Fe, New Mexico, 2010
The evening shadows abstracted the head of this work of decorative art for me. All I needed to do was to frame it tightly, and use my spot meter to expose for the brightest part of the image – the trunk. The image offers a haunting reminder that the elephant itself may be slowly headed to extinction.
5 comments leave a comment 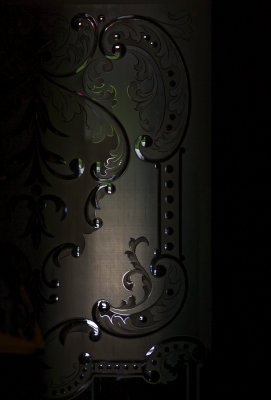 Saloon Door, Durango, Colorado, 2010
Once again, use my spot-metering mode, this time exposing on a glowing opaque antique glass panel, which illuminates the image selectively, instead of universally. The saloon was located in a carefully restored 1880’s hotel. I try to imply the faded elegance of a time long past.
4 comments leave a comment