Gallery Twenty Five: Stimulating the imagination with ōopposites and contradictionsö 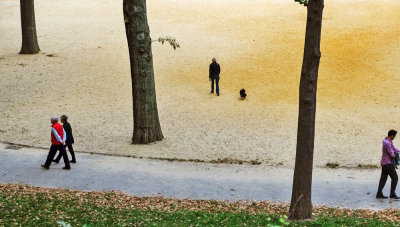 Opposite paths, Central Park, New York City, New York, 2013
I climbed a hill overlooking a pedestrian pathway and created three separate panels with my image by including the three trees that move diagonally through the frame. I photographed many people moving in opposite directions along the sidewalk, but the picture did not work as expression until the dog walker at center veered off the path and headed away from me into the barren field between the trees. At that same moment, a couple was walking through the left hand panel, while a single pedestrian was just about the leave the third panel at far right. The couple walks to left in unison, the dog follows its walker off into the field, and the single pedestrian at right charges the image with jarring tension by touching the edge of the picture with both a toe and an arm. Each party also appears different from the others ¢ the man at left wears bright red vest that energizes the image, the person leaving the image at right wears a checked purple shirt, and both the walker and her dog appear in neutral black. The photograph speaks of the contrasting differences between the users of a park, as well as the multitude of contrasting options a park can offer. All who come to use it march to the beat of their own drums.
6 comments leave a comment 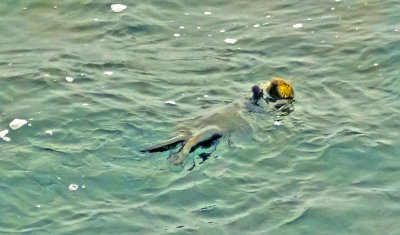 Sea Otter, Point Lobos Natural Reserve, Carmel, California, 2012
I photographed this sea otter floating on its back, holding its paws seemingly clasped under its chin, from high on a cliff overlooking Monterey Bay. We do not expect to see a marine mammal swimming on its back. Yet when on the surface, that is exactly what they do. We also do not expect to see a marine mammal clasping its paws under its chin. However, this sea otter has been on the hunt. Sea otters dive to the bottom of the sea, lifting and turning over rocks with those forepaws, looking for a meal. When they find food, they grab it with their forepaws, and stuff it into a loose pouch under one of its forelegs. They are the only marine mammals that catch food in this way. (They can even break open a hard shell by banging on it with a rock!) The sea otter then comes to the surface, rolls over, and eats its meal while floating on its back, holding the food tightly in its forepaws.
This image confounds our expectations. We do not expect to see a sea otter eating dinner with its paws while floating along on its back. Yet that is exactly what is happening here -- on close examination I confirmed that a spiky sea urchin is indeed clasped within those forepaws. This sea otter, after biting through the bottom of it, is licking the soft content out of the urchin's shell.
0 comments leave a comment 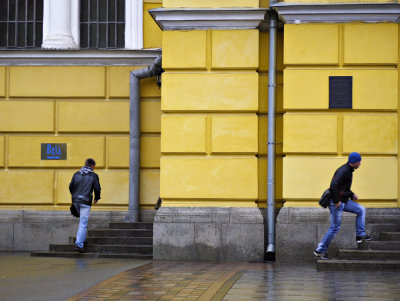 Divergence, St. Vladimir Cathedral, Kiev, Ukraine, 2009
Two men walking past me suddenly diverged, each of them taking a different route to enter the great yellow cathedral at dusk. It was raining lightly, and the men were in a hurry. They are dressed very much alike, yet it seems that they have opposite objectives in mind as they mount separate steps for the evening service. It might symbolize the very nature of religion itself ¢ people can take divergent paths to faith, each marching to the beat of their own drum.
0 comments leave a comment 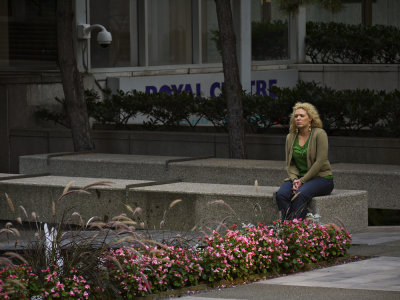 Benches, Vancouver, Canada, 2009
This woman, sitting with folded hands on one of many concrete benches in front of a Vancouver office building, seems to be to waiting for someone who may be running late. Or perhaps she may be simply using that bench to gather her thoughts. She is alone and perhaps even a bit uneasy, yet the array of pink flowers and grasses that flow towards her across the bottom of the picture suggest optimism and hope. She does not take notice of them, at least not at this moment of contradiction.
0 comments leave a comment 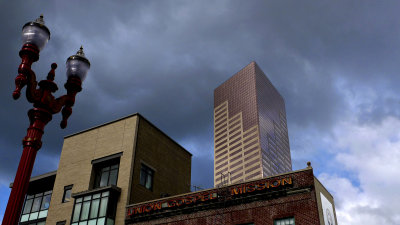 Contrasts, Portland, Oregon, 2009
The 43 story US Bancorp Tower is the second tallest skyscraper in Portland. It is known as ōBig Pinkö because of its color, and an album by ōThe Band.ö It is the largest office building in Oregon in terms of volume. PortlandÆs top grossing restaurant, offering the best views of the city, occupies its thirtieth floor. Several blocks away is the Union Gospel Mission, which as been feeding the homeless and restoring the lives of addicts since 1927. I juxtapose the two structures, anchoring the image with one of downtown PortlandÆs signature Victorian light poles. They are polar opposites in that one structure celebrates wealth and the other exists because of poverty. Yet the rain clouds that drift across the image seem to unite them both, given the context of PortlandÆs current economic dislocations.
7 comments leave a comment 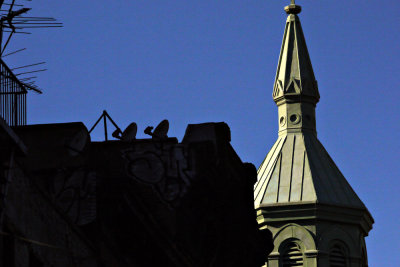 Church and satellite dishes, Chinatown, New York City, New York, 2009
The Church of the Transfiguration was erected in 1801 by the English Lutheran Church and sold to the Catholic Church of the Transfiguration in 1853. More than 200 years later, it still looms over Chinatown, and offers service in Cantonese, Mandarin, and English. I photographed only its distinctive green steeple, contrasting it to the abstracted pair of satellite dishes on a neighboring rooftop. A rooftop triangle, made out of metal staves, echoes the triangular shapes on the church steeple. The satellite dishes and the old church stand in contradiction -- they represent entirely different ways of sharing knowledge. On the other hand, both the steeple and the dishes aim upwards ¢ each harvesting the mysteries of life, yet in strikingly different ways.
2 comments leave a comment 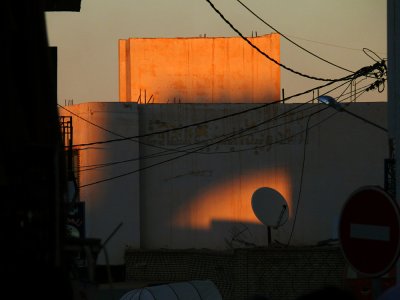 Wired, Tozeur, Tunisia, 2008
A satellite dish is overwhelmed by a tangle of utility wires, a stark contrast in technologies. I surround the dish with the glow of the setting sun. The golden light also bathes a building in the background ¢ its rebars tell us that construction, like technology, moves at it own timeless pace in the small desert towns of North Africa.
2 comments leave a comment 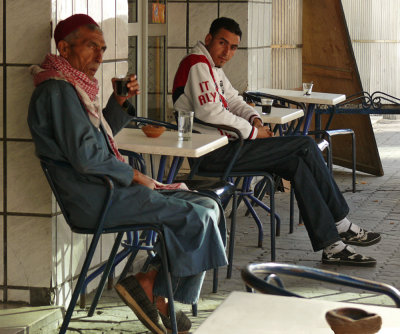 Age and youth, Sousse, Tunisia, 2008
These men, seated next to each other in a Sousse cafķ, did not know each other. They represent opposite life styles. The older man wears traditional Tunisian clothing, while his counterpart wears the world of sport on his feet and back. They acknowledge my presence, but not each otherÆs. They may drink their morning tea within a few feet of each other, yet they seem to be a world apart.
0 comments leave a comment 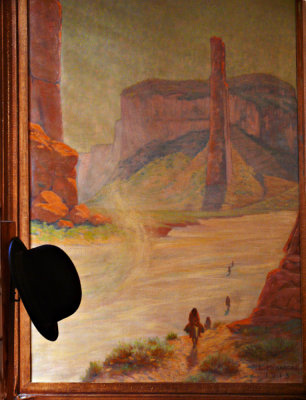 East meets west, Old State Capitol, Phoenix, Arizona, 2008
The oil painting, by Arizona cowboy artist Lon Megargee, was hung in the Arizona State Capitol Building in 1913, a year after Arizona joined the Union. The painting depicts the old west, with its monumental rock forms and an Indian on horseback moving towards us. The painting hangs in one of the old capitolÆs tiny offices, now part of an Arizona historical museum. A derby hangs next to it on a coat rack. By leaning as far as I could to the right, I was able to merge the hat into the painting itself, an incongruous juxtaposition of opposing ways of life. The derby evokes the urbane style of 1913's eastern cities, while the painting offers a nostalgic western dreamscape that by 1913 had already become lost to memory.
2 comments leave a comment 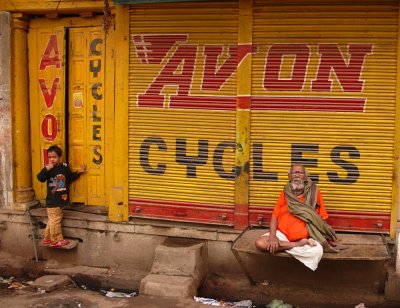 The scale, Varanasi, India, 2008
An old man meditates on the loading dock of this closed bicycle shop, while a child balances on a slab-like step. They seem at first to exist in separate worlds. I composed the image as two people on a symbolic scale ¢ they appear to balance each other perfectly. Even though the man must weigh more, and indeed has seen more, than the child, the little boy seems to hold his own through his curiosity. He seems ready to leave his place on the scale, push that door open, and explore a new world within.
2 comments leave a comment 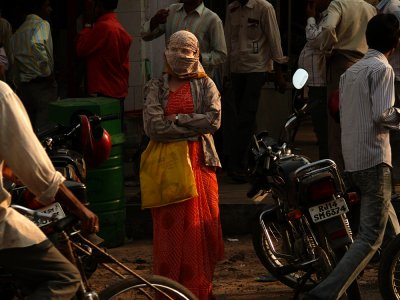 Surrounded, Jaipur, India, 2008
An Islamic woman at first seems to be lost in a sea of men on this Jaipur street corner. I cropped their heads off to stress the point. Yet there are several contradictions at work in this image. The woman may be alone and seemingly vulnerable, yet her body language makes her look utterly confident. Her vividly colored clothing calls attention to her, yet nobody seems to look her way. Her masked face hides her identity, while her eyes seem to examine everything around her. She wears a costume that goes back in time, while surrounded by machines that point to the future. She is outnumbered here ten to one, yet she is the one who seems to be in charge.
2 comments leave a comment

Cradle to grave, Long Xuyen, Vietnam, 2008
One of the most indelible experiences I had in Vietnam was a long afternoon walk through a working class neighborhood in Long Xuyen. These people seldom, if ever, see visitors from another country in their backyards. But there we were, not only visiting, but making photographs such as this wideangle image, featuring two young children and the graves of two of their ancestors just behind their house. It is common for the Vietnamese to bury their loved ones next to their homes, where they will always be in sight and in memory. These children may grow up with a greater sense of continuity because of it. Life and death are indeed opposite conditions, yet they are part of the same process. These children may grow up not fearing death, but rather accepting its inevitability and understanding it. I hope this image will imply just that.
2 comments leave a comment