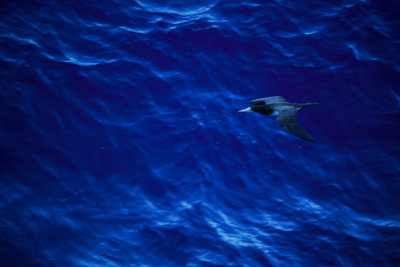 Booby in flight, Off the Brazilian coast, 2010
Our cruise was followed for several days by flights of Boobies, a bird that hunts fish by diving from a height into the sea and pursuing their prey underwater. This one was flying just below the balcony of my own cabin, and I was not only able to capture it in flight, but in doing so, I introduced a sense of motion that contradicts the actual stoppage effect. It is this contradiction that creates almost a vibrating effect – both the brilliantly deep blue sea and the bird appear to be throbbing with energy.
0 comments leave a comment 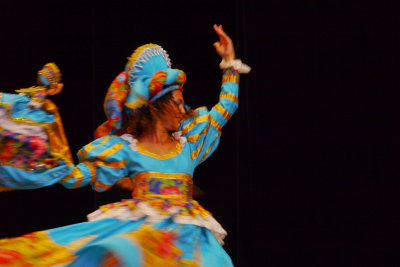 Performance, Theatro Santa Isabel, Recife, Brazil, 2010
I made several hundred photographs of this dancer and her colleagues during a performance of Brazilian carnival dance in Recife’s historic opera house. Dance is about poise, energy and movement, and this is the image that I felt most effectively defined this performance for me. It is rich in blur, yet clearly defines the flow of the movement itself. We can see the dancer’s expression through the blur – her eyes are closed, her face a mask of confidence and pride. She holds a doll in one hand -- it throbs with blur. Meanwhile, her other hand is held high, her arm thrust a gesture of accomplishment.
2 comments leave a comment 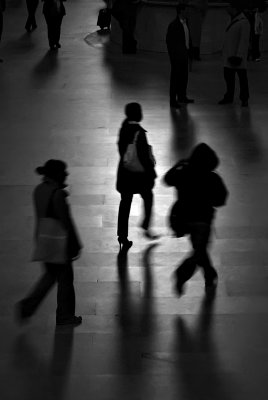 Rush, Grand Central Terminal, New York City, New York, 2009
I use my shutter priority shooting mode here, slowing down the speed of the shutter to 1/25th of a second to extend the motion of these commuters as they pass through the reflected glare coming from the station’s enormous windows. I was able to freeze the left leg of the commuter in the center of the image, while blurring the rest of her. Just as she was planting her sharp heel on the marble floor, another commuter flew past her at a full run, producing an even greater state of blurred motion. The concept tells us that people in a hurry are likely to move at varying speeds – and this image proves it.
0 comments leave a comment 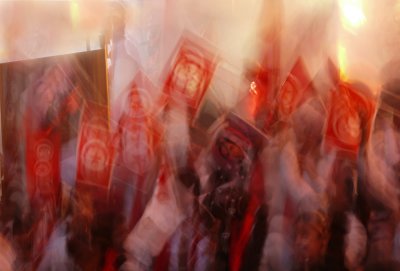 Concert, Tunis, Tunisia, 2008
While we were visiting Tunisia, the country celebrated New Era Day, a commemoration of President Ben Ali’s coup of November 7, 1987. Ali is still in power twenty-one years later. Here his blurred image waves from dozens of flags, carried by school children singing a national song in concert on the steps of Tunis’ Theatre Municipal. I made this image by ambient light at night, using a full second to express the joyful emotions of the singing children.
7 comments leave a comment 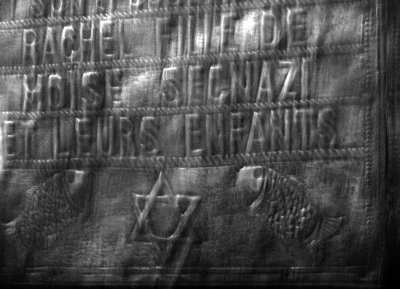 El Ghriba Synagogue, Jerba, Tunisia, 2008
In 556 BC, a group of Jewish clerics fled the fall of Jerusalem, and established a synagogue on the Island of Jerba. I made this image of a memorial placque in the synagogue’s sanctuary at one-sixth of second. The resulting blur makes the tablet seem to weep – not just for the dead, but for the persecution that Jerba’s Jewish community faced here over the centuries. There are still 1,000 Jews living on Jerba Island. Muslims, Christians and Jews generally respect each other’s beliefs in Tunisia.
1 comment leave a comment 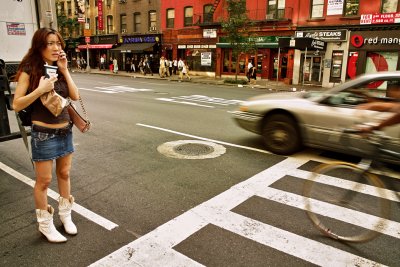 Third Avenue, New York City, New York, 2008
Camera in hand, I was waiting for the light to change so I could cross the street in pursuit of a potential picture. Suddenly another picture opportunity exploded right in front of me. A phone rang, a woman answered, her phone in one hand, her coffee and a paper bag in the other. Her incongruous western-style boots were planted, toes-in, on one of Manhattan’s busiest avenues, and she was obviously concerned about what she was hearing. I lifted my camera and made this image, not yet realizing the full meaning of what I had been able to include in the frame. Later, when I was able to carefully inspect this image for the first time, I noticed that my frame also included a blurry bike and car. The blur implies dangerous speed, and her expression seems full of concern. Yet she stands in the street itself, well away from the safety of the curb, oblivious to such threats only a few feet away.
6 comments leave a comment 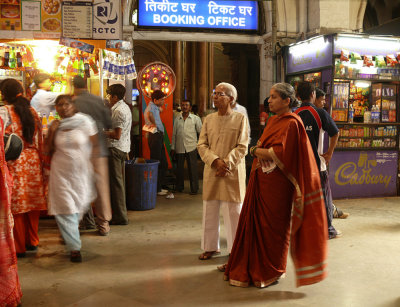 Commuters, Victoria Terminus, Mumbai, India, 2008
Mumbai was once known as the western gateway to India. Today its population of 13 million makes it India's largest city, as well as its commercial center. The Victoria Terminus, known now as Chhatrapati Shivaji Terminus, stands at its heart. My camera’s image stabilization feature allowed me to make this shot hand-held at one-fifth of a second and still hold most detail. The only exception is the woman who is moving rapidly towards us at left. Her burst of energy contrasts to the relaxed, crossed-hands posture of the two people at right.
0 comments leave a comment 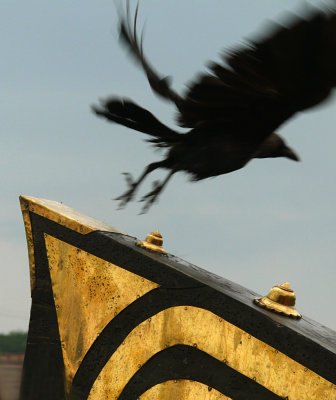 Flight, Kerala backwaters, India, 2008
Kerala is a state on the tropical Malabar Coast of southwestern India. It is 1,300 miles from Delhi, where we began our trip through India, and represents an entirely different culture. This crow lifts off from a houseboat that carried us through Kerala's backwaters for three days. It was perched on the boat’s ornate bow, and lifted off as I pressed the shutter button. The fairly fast 1/250th of a second shutter speed was not enough to stop its movement. Instead I caught the blurred bird just as it was leaving the frame, giving the image enough tension to make it throb with energy.
0 comments leave a comment 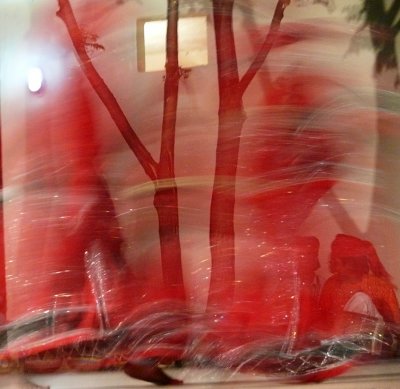 Folk dancers, Rajasthan, India, 2008
I rested my camera on a table and used a very slow one-third of a second exposure to blend a pair flowing saris with two trees that stood in the background. I was even able to include a pair of seated dancers conferring in the lower right hand corner as an incongruous counterpoint. The blurred dancers are so abstract that the only clues to their identity are the foot and a pair of moving hems. The red color dominates the image and puts it into motion. 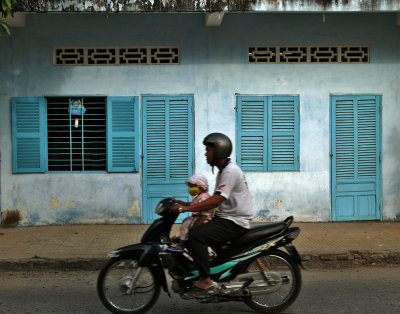 Cyclist, Sadec, Vietnam, 2008
The blue shutters are tack sharp. The speeding motorbike appears to be stopped in its tracks, but is not clearly defined. Even though I use a shutter speed of 1/400th of second here, which is very fast, it is not fast enough to completely freeze the machine and its riders all of their detail. And it is that little touch of blur here that gives the image its vitality – the machine seems to quiver in place – the profile of its driver vibrates with energy, in striking contrast to the crisply defined detail in the shutters behind him. Many photographers would scrap such an image because they wanted to “stop” the bike with clarity. I would urge them to reconsider their decision, and look at its blur as an expression of vibration and motion. And that is what motorbikes are all about.
6 comments leave a comment 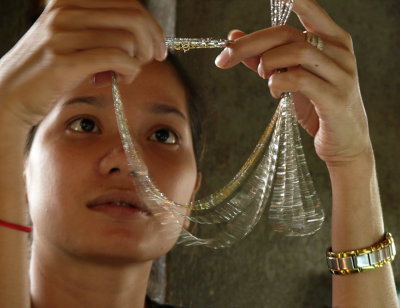 Chains, City Market, Phnom Penh, Cambodia, 2008
This jewelry saleswoman had few customers – she passed the time inspecting the products she was selling. It was fairly dark inside the big indoor market building, forcing me to use a slow hand-held shutter speed of 1/10th of a second. That slow speed works to my advantage here. Her gaze is firm and constant, yet the chains are elusive, in constant motion. Another expressive tool here is the light coming from a window on the left side of the frame. It illuminates not only her face, but the moving chains as well, making them sparkle and dance.
4 comments leave a comment 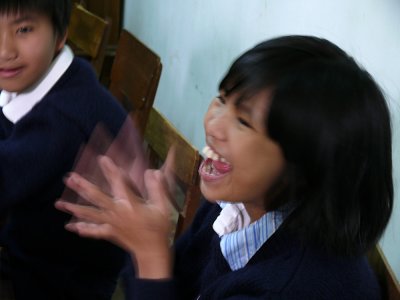 Hoa Phong Lan handicapped children’s school, Dalat, Vietnam, 2007
We spent more than an hour photographing in the classrooms of this school for children with special needs. Some of them, such as this child, became so excited at the presence of my camera that she began to clap and sing with great exuberance. How best to capture this exuberance? The classrooms were dark with few windows, leaving me with but three options. I could increase the ISO and risk muddy images. I could use a flash, as other photographers with me were doing, and clearly stop the action, but in doing so, I would risk making a harshly illuminated, snapshot-like image. Or I could stay at ISO 100, and shoot the scene at a very slow shutter speed – in this case 1/5th of a second. I opted for the latter, and it worked perfectly for my purpose. Her hands are seen in both an open and closed position, simulating a clapping action. Her mouth moves as well – you can almost hear her voice. Most of all, we sense her spirit, enthusiasm, and above all, her joy. I shot her again and again, and each time I would make a picture, her happiness intensified.
6 comments leave a comment