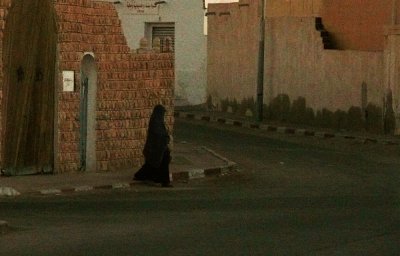 Woman in black, Douze, Tunisia, 2008
We were leaving Douze very early in the morning. Our bus rolled through quiet streets, shrouded in the shadows of dawn. I was sitting next to the driver, and noticed a woman in black emerge from a door about a block ahead of us. I had time to set my shutter speed at 1/400th of a second to freeze the rocking, jolting movement of the bus. As we drew near, she stepped off the curb into an empty street and I made this image through the front window of the bus. To be able to use 1/400th of a second, I had to underexpose the image by a full stop. This led to a dark picture, but in this case the darkness works for me, as does the noise triggered by my use of ISO 400 for this image. The photograph becomes impressionistic rather than descriptive. The woman in black is mysterious and so is the darkness that provides the context.
2 comments leave a comment 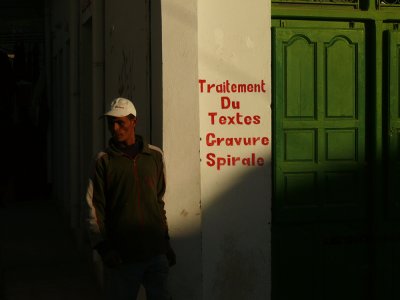 At the printer, Tozeur, Tunisia, 2008
As we were leaving Tozeur, I was sitting at a side window of the bus, and noticed a man standing next the doors of what appears to be a print shop. The morning light warmly illuminates the scene but because the bus was moving, I only had instant to react. I had pre-set my shutter speed at 1/640th of a second to deal with my moving vantage point, which enabled me to make this clean image.
0 comments leave a comment 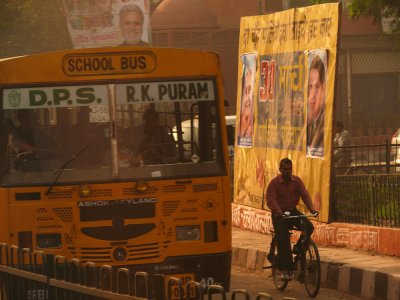 The bus, Delhi, India, 2008
It is appropriate that I begin this gallery on bus-bound photography with a shot of a bus. In this case, I was shooting from a side window, and we were stopped in heavy traffic.
Because my bus was not in motion, I had time to focus on the advertisement in the background and shoot numerous subjects as they passed in front of it. In this case, a school bus and a solitary bicycle rider arrived simultaneously. Using burst shooting, a 188mm telephoto focal length, and a fast 1/250th of a second shutter speed, I was able to squeeze the rider in time and space, caught incongruously between a school bus and the advertisement.
6 comments leave a comment 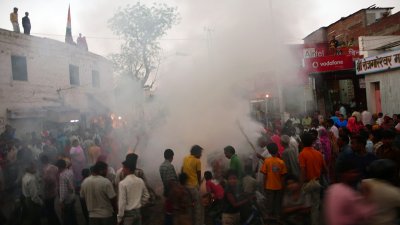 Evening of Bonfires, Jaipur, India, 2008
I made this photograph from a moving bus while rolling through one of Jaipur's neighborhoods. The eve of Holi, India's spring festival of colors, is known as The Evening of Bonfires. The fire symbolizes the destruction of evil. The next day the ashes from the bonfires are collected and smeared on the limbs of the celebrants. I made this image late in the evening from a side window. It was almost dark outside, and the bus was in motion. I knew the image would be blurred before I made it – I was shooting at the very slow shutter speed of 1/10th of a second. However the resulting camera shake would enhance my idea rather than detract from it. The 28mm wideangle focal length embraces the fire, the crowd, a column of smoke, and the surrounding buildings. The blur puts the scene into motion, and motion is the essence of celebration.
5 comments leave a comment 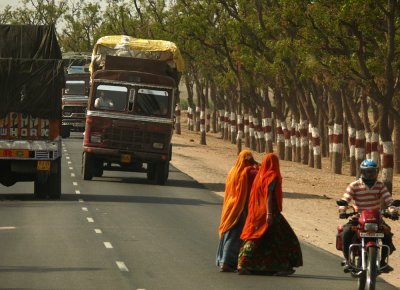 Road Risk, Rajasthan, India, 2008
Big trucks rule the rural roads of India -- people are somehow able to time the gaps, allowing them to make it to the other side. These women made it. But some don't. India accounts for ten per cent of road accident fatalities worldwide. It was a sunny morning, and I was sitting next to the driver of our tour bus, shooting through the huge front window. I was using burst shooting, and the bright light allows me to set my shutter speed at a very fast 1/1000th of a second, allowing me to stop the action of my subjects. This frame worked perfectly to express risk – the two women in brightly colored saris are walking together as one. They are hemmed in between a wall of trucks and a passing motorbike. Will they make it safely to the other side? Their lives seem to be hanging in the balance. The red and white bars painted on every tree that lines the road rhythmically repeat the dotted line on the pavement. The picture is both frozen in time yet those highway lines and painted trees set it into implied motion at the same time, making the risks of road travel seem very real.
2 comments leave a comment 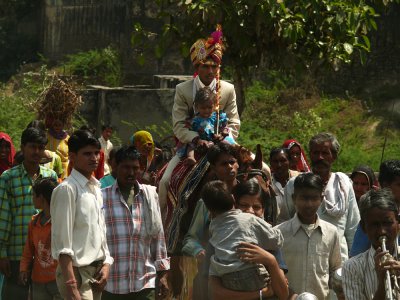 Wedding procession, Sawai Madhopur, India, 2008
As we were driving through the city of Sawai Madhopur, traffic came to a halt as a wedding procession approached. I made this image through the front window of the bus as the groom approached on horseback, carrying a young child in his lap. There was no bride in sight. I was told that she was waiting for him to come and claim her. It was mid-morning, and the sun was very bright. It allowed me to use a fast shutter speed of 1/1000th of second, freezing the expressions of those in the crowd surrounding the turbaned groom. The bus was standing still, and I had high frontal vantage point allowing me to create a layered image. I was able to make sense of this crowd scene by drawing the eye of the viewer into the image, tying the woman carrying the child in the foreground layer to the groom carrying another child in the middle layer, and concluding the directional flow with the woman carrying the branches on her head in the background layer.
6 comments leave a comment 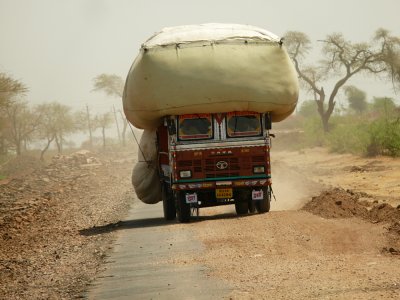 Overload, Sawai Madhopur, India, 2008
Indian trucks make the most of every load of produce. Not only is the truck's cargo area loaded with crops -- a huge bag covering the roof and sides hold even more. I wondered how such trucks manage to keep their balance on a curving road. Once again, I am shooting from the front window of my tour bus. I saw this incongruous subject surging towards me from a distance and used my longest telephoto focal length – 420mm – allowing me to focus sharply on the truck and make the dusty trees in the background into a softly focused dreamscape. The combination of the incongruous load and the bizarre landscape creates a surreal image.
4 comments leave a comment 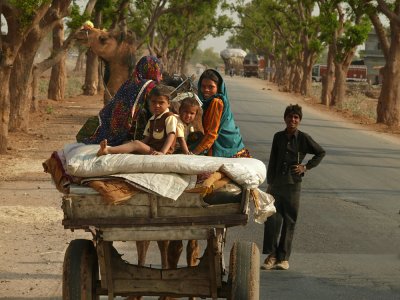 Gypsies, Dausa, India, 2008
This gypsy caravan had stopped just in front of our bus. We stopped as well, and I photographed this family on its camel cart through its front window. The gypsies
are sitting high on the cart and the high vantage point of our bus window brings my camera even with them. Using burst shooting with a medium telephoto focal length, I had enough time to make dozens of images of this scene. The camel lifted its head once and only once, and I was able to catch that moment. The cocked arm of the young man standing to the right of the cart offers a diagonal counterpoint to the camel’s head.
6 comments leave a comment 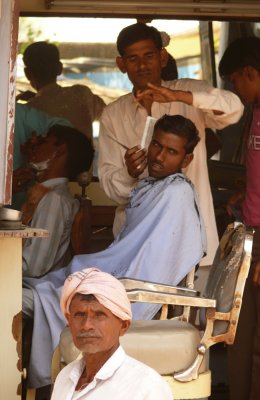 Barbershop, Chandbaori, India, 2008
Our bus stopped briefly for supplies in this small Rajasthan town. We were not allowed to leave our bus, but I asked our driver to keep the door open while we were waiting. I was able to make this photograph of the local barber by shooting through that open bus door. I had plenty of time to layer the image, anchoring it with the turbaned man in the foreground. The facial expression of the customer and the eloquent hands of the barber create meaning in the middle layer. And the silhouetted reflection of the barber in a mirror creates the background layer.
6 comments leave a comment 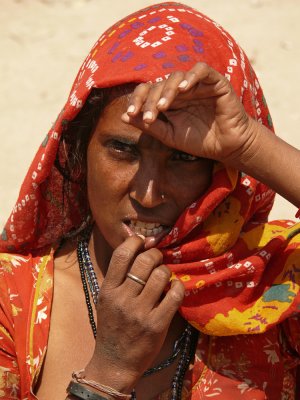 Bewilderment, Chandbaori, India, 2008
I also made this image through the open door of our bus while we were stopped for supplies in Chandbaori. Whenever tourists come to a rural town in India, a crowd is likely to gather. This woman was one of several who came to just stare at our bus in bewilderment. To her, we might have just been well been visitors from Mars. Because I was shooting at my longest focal length (420mm) from inside of a shadowed bus, and she was looking into a bright sun, she never saw me. She responds to her own thoughts, not to my presence, largely because of my invisibility within the bus, which functions here as a photographer’s blind.
2 comments leave a comment 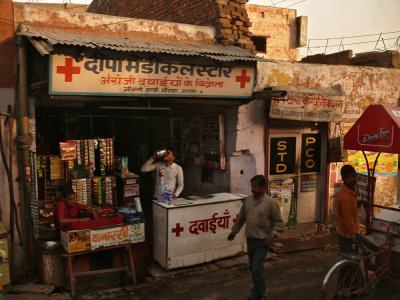 Drug store, Agra, India, 2008
In India, medicines are sold (mostly without prescription) in “Chemist” shops such as this one. The proprietor seems to be enjoying an afternoon drink as our bus rolled past. I made this picture through a side window of the bus, using burst shooting and a shutter speed of 1/200th of a second. The late afternoon light paints the mélange of signs around the shop in warm colors, providing a perfect patina for a neighborhood shop in urban India.
2 comments leave a comment 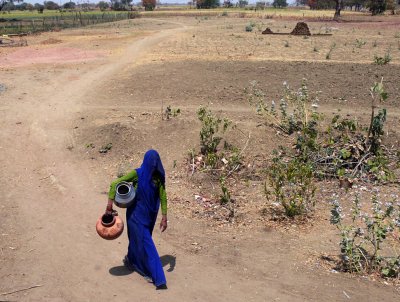 Shock of color, Jhansi, India, 2008
Two things fascinate me about this picture. The blue sari and veil seems shockingly out of place in this barren, almost monochromatic landscape. And it seems as if this woman could be walking both backward and forward at the same time, an apt metaphor for the role of women in India's hinterland. I made this image from the side window of our tour bus, using a 35mm focal length and a shutter speed of 1/400th of a second. I needed that fast a shutter speed – not to freeze the subject’s movement, but rather to combat the rapid movement of the bus itself. When traveling with a tour group, I can’t ask the driver to slow down for my pictures at the expense of others in the group. So I must work with whatever I am given. And in this case, I at least had good light and a brightly colored subject that I could see coming towards while we were still some distance away. I began shooting in bursts as soon as I caught sight of her, and one of those bursts produced this image.
4 comments leave a comment