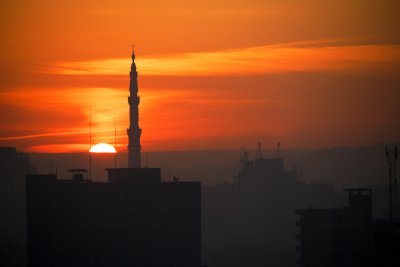 Sunrise, Cairo, Egypt, 2011
I juxtapose a symbol of the Islamic faith – a minaret – against a symbol of contemporary Egypt’s economy – a distant building blanketed in both morning mist and construction cranes. This juxtaposition poses a symbolic question. During my brief Egyptian visit, the country was preparing to vote for a parliament that will draft a new constitution for this troubled land, the most populous in the area. What kind of government will best serve Egypt and the Middle East – religious or secular? A new day dawns as an “Arab Spring” morphs into an “Arab Fall.”
2 comments leave a comment 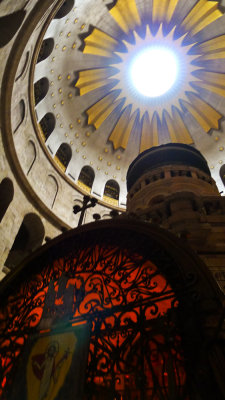 Church of the Holy Sepulcher, Jerusalem, Israel, 2011
This church, which has attracted pilgrims since the 4th century, is the holiest Christian site in the world. It stands over the spot that is believed to encompass both the site of Christ’s crucifixion and tomb. Biblical sources describe both, and early Christian communities worshiped at the site during the first century. The Romans built a Temple to Aphrodite over this site in the second century, and Constantine The Great, the first Christian Roman emperor, built the first church here in 326 AD, which was in turn destroyed by Muslim invaders in 1009. The Crusaders recaptured and began to rebuild the church a hundred years later, and the present structure -- a mix of Byzantine, medieval, Crusader, and modern elements – slowly emerged.
I made this image of what is believed to be the site of Christ’s tomb. It is encased in large Greek Orthodox shrine, added in 1810. The shrine stands in the middle of a rotunda, below a recently built dome decorated with a 12-pointed star. My 24mm wideangle lens, low vantage point, and vertical frame draw the eye from the shrine up to the pure white hole in the center of the dome.
0 comments leave a comment 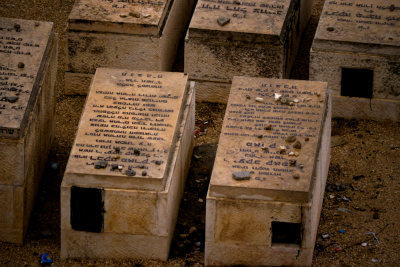 Jewish cemetery, Mount of Olives, Jerusalem, Israel, 2011
Long before Christianity or Islam existed, Jerusalem was already holy ground to Jews. The Mount of Olives has been used as a Jewish cemetery for 3,000 years, and holds approximately 150,000 graves. I made this image of five of those graves. The stones left on these graves continue a tradition that goes back to Biblical times, when gravestones were not used, and mounds of stones marked gravesites. Today, visitors to these graves have left small stones, showing that someone has visited these gravesites, and thereby perpetuated their existence.
0 comments leave a comment 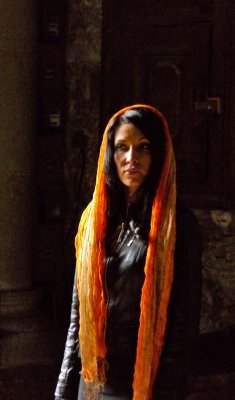 Reverence, Church of the Holy Sepulcher, Jerusalem, Israel, 2011
The light falling on this woman’s orange scarf as she entered the Church of the Holy Sepulcher in Jerusalem was striking. She seemed aglow, somber, and reverent as she approached the crowd of worshippers gathered around a large stone that is said to have once supported the body of Christ.
2 comments leave a comment 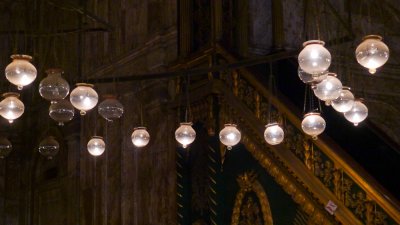 Muhammad Ali Mosque, Cairo, Egypt, 2011
Situated high on the summit of Saladin’s citadel, this Ottoman mosque dominates the skyline of the city. Built in the mid-19th century, this mosque features two pulpits. This one, dimly seen behind the ornate light fixture, is the largest in Egypt. I spot-metered on the bulbs to stress the beauty of the light fixtures, causing the pulpit to fade softly into the darkness.
0 comments leave a comment 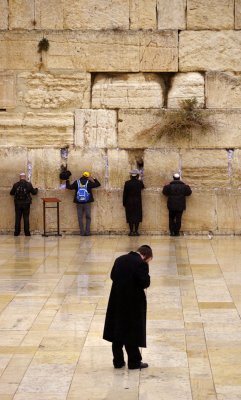 The Wailing Wall, Jerusalem, Israel, 2011
The Wailing Wall is one of the most sacred sites in Judaism. The site for Jewish prayer and pilgrimages for centuries, it is believed to have been part of Jerusalem’s Second Temple, first dedicated in 516 BC, and expanded by Herod the Great starting in 19 BC. Its name stems from the Jewish practice of coming to the site to mourn and bemoan the Roman destruction of this temple, along with the rest of Jerusalem, in the first century. Today, a huge plaza stands before it, holding up to 400,000 people. It is used for massive prayer and military ceremonies. I made this image during a light rain with a long telephoto lens. I was standing in the large plaza, and waited until a single worshipper walked into my frame between my camera and the Wailing Wall itself. He appears to already be at prayer. The four men holding on to the wall itself are reverently touching it in various ways as they pray. We can see many papers stuffed between the cracks – written wishes from previous worshippers. The wishes are periodically collected, and taken to the Jewish cemetery on the Mount of Olives, where they are buried.
2 comments leave a comment 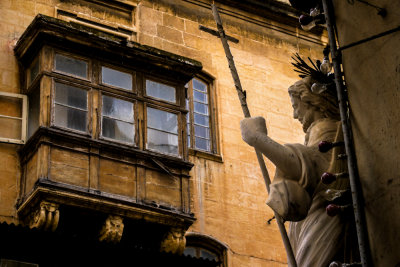 Street corner, Valletta, Malta, 2011
In 1569, Grand Master Pinto del Monte, in order to embellish the then new city of Valletta, issued an edict directing owners of buildings at street corners to ornament them. Many of them erected statues of saints, said to ward off evil. I photographed this saint from the side – it is illuminated at night by a garland of light bulbs. The surrounding buildings reflect the five hundred year old history of this city.
0 comments leave a comment 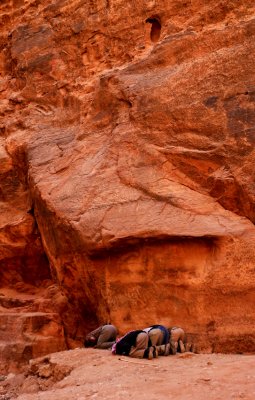 Morning prayer, Petra, Jordan, 2011
Five Muslims pray near Petra’s historic Treasury, carved out of sandstone two thousand years ago. The brilliant red/orange rock incongruously dwarfs the worshippers. They are totally immersed in prayer, and do not notice the scale incongruity that looms overhead. This photograph was very difficult to make – there were so many tourists swarming around the Treasury that I had to wait several minutes for a clear shot of these worshippers. Fortunately, my opportunity eventually came – just seconds before the prayer ended.
1 comment leave a comment 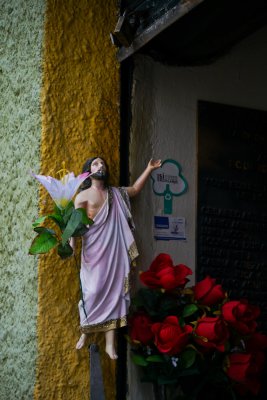 Tomb decoration, Cuenca, Ecuador, 2011
Intense religious expression is characteristic of not only Ecuador, but also all of South America. I passed by many stores in Cuenca selling tomb decorations – this figure of Christ, accompanied by a bouquet of roses, was hanging on the front door of one of them. The robed figure holds a blossom in one hand, and invites the public into the store with the other. The primary colors of red and yellow frame the figure, making it seem to levitate. And advertisements pasted on the wall in the background add a practical, yet incongruous, touch.
0 comments leave a comment 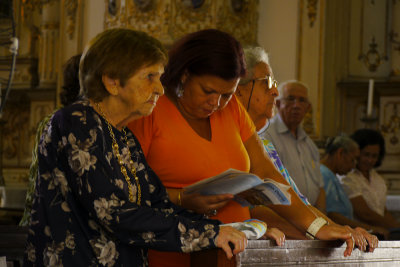 Service, St. Francis Church, Recife, Brazil, 2010
I used a long lens to focus on the responses of these worshippers during a mid-day service. I liked the flow of hands gripping the back of the bench as it moves through the image. I also liked contrast in the age of the people in this image – faith is faith, regardless of age or gender.
0 comments leave a comment 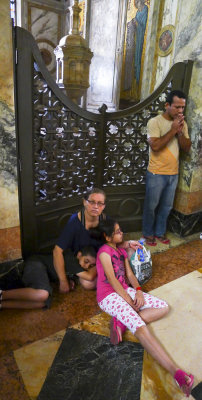 Family, Cathedral, Belem, Brazil, 2010
I used a wideangle lens turned vertically to bring together this family, sitting on the floor in the back of the Belem Cathedral during a mid-day post Christmas service. The body language of the mother and her daughter, her sleeping son, and even the man praying by the chapel gate at right, describe the process of prayer, externally, internally, and even subconsciously.
0 comments leave a comment 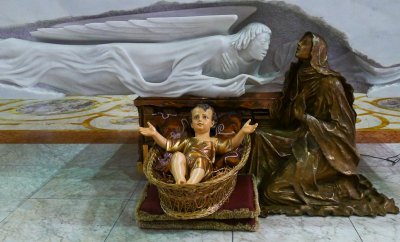 Altar, Cathedral, Belem, Brazil, 2010
The Cathedral of Belem normally features two interactive sculptures, however at Christmas, it becomes a nativity scene with the addition of the third sculpture in a basket. I photographed in the Cathedral on the day after Christmas, and was able to walk up to the altar to make this image following a mid-day service. The three sculptures reflect wide variations in style and material, yet they interact here quite effectively.
2 comments leave a comment