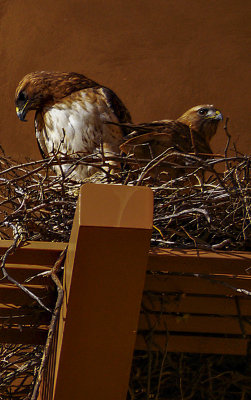 Mates, Phoenix, Arizona, March, 2012
Red Tailed Hawks are monogamous, mating for life. This pair has already built a nest on the side of an apartment building at Sagewood, a Phoenix retirement community. It holds three eggs. I made this image with a 400mm telephoto lens, standing directly under the nest, which was four stories over my head. The pair takes turns as egg-sitters.
4 comments leave a comment 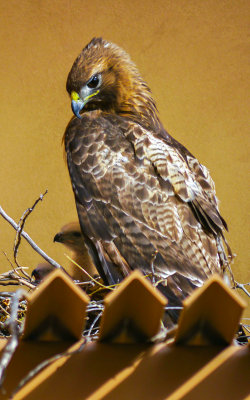 Newborn nestlings appear, Phoenix, Arizona, April, 2012
The young hawks have hatched. Because they were living at the bottom of nest, the newborn nestlings could not be seen from the ground. With the help of our community’s maintenance staff, I was able to gain access to the empty fourth floor unit right next door to the nest. I opened a living room shutter, and was able to photograph one of the adult hawks at very close range, less than a dozen feet away. I was so involved in photographing the adult hawk in such close proximity that I did not notice the presence of two of these nestlings until I was saw the image later on my computer. The hawk had placed its body squarely between itself and my 400 mm lens, hiding the two nestlings behind her. I made about thirty photographs of the protective hawk, and in just one of them, for a very brief instant, the heads and beaks of its tiny white nestlings were visible.
9 comments leave a comment 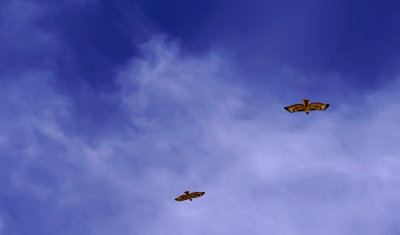 Hawks aloft, Phoenix, Arizona, April 2012
Both parents periodically left the nest to soar over Sagewood, looking for food their newborn nestlings. Unfortunately, during one of these hunts, one of the nestlings left behind fell from the nest and died. Two nestlings remained, and required constant feeding.
In this image the hunting hawks fly directly overhead. I waited until the morning light brought out the detail in their translucent, four-foot wide wingspans.
2 comments leave a comment 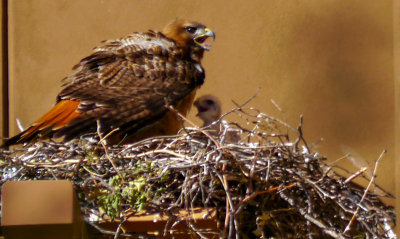 Conflicting emotions, Phoenix, Arizona, April 2012
A young nestling and its parent appear to be echoing each other’s emotions at the moment. The adult hawk opens its beak to sound a warning. It seemed as if it was speaking to me. Meanwhile, its offspring opens its own beak as well.
0 comments leave a comment 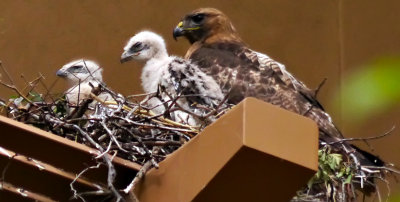 Trio, Phoenix, Arizona, April 2012
The two surviving nestlings stand with a parent near the edge of the nest, already beginning to learn small things about the big world below their perch. They are only three weeks old here, and reveal much of themselves to us for the first time. This display lasted only a few minutes. They would soon retreat to the depths of the nest, hiding all but the tops of their heads from us.
4 comments leave a comment 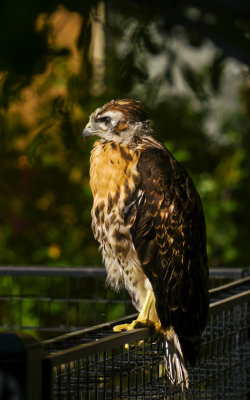 Young hawk, Phoenix, Arizona, May 2012
In early May, I left Arizona to photograph in Havana, Cuba. When I returned later that month, the pair of young hawks was able to leave the nest, and began making short flights around Sagewood’s complex. I found this young hawk sitting on a fence surrounding a fountain in one of Sagewood’s courtyards. Its white feathers have fallen away, revealing the characteristic Red Tailed Hawk plumage, glowing orange and brown in the morning sun. It allowed me to come within a few feet, and seemed to have no fear of man.
2 comments leave a comment 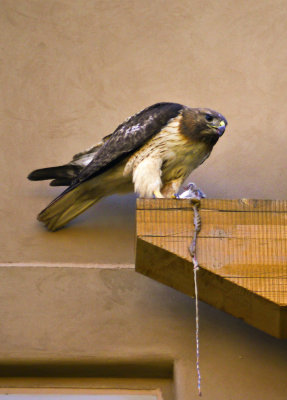 Prey, Phoenix, Arizona, May 2012
I found this adult hawk perching on another of Sagewood’s apartment building, directly across from its nest. A hunt proved successful -- it grasps the remnants of rabbit. The hawk is dissecting its entrails, and the proceeds will be shared.
0 comments leave a comment 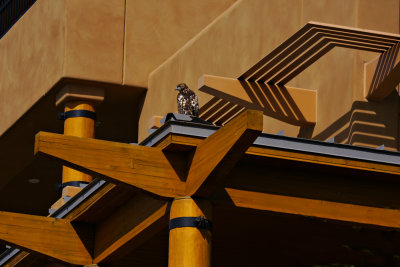 Nature and design combine, Phoenix, Arizona, May 2012
One of the immature hawks becomes an integral part of Sagewood architecture, perching on the corner of one of its apartment buildings just as the early morning light creates a dynamic nest of geometric shadows behind it. The work of both man and nature are combined within this single image.
8 comments leave a comment 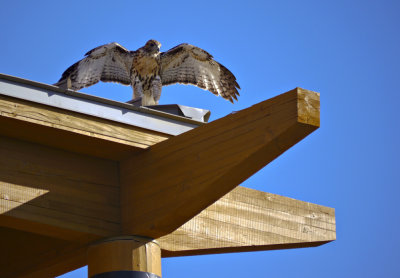 Rhythms, Phoenix, Arizona, May 2012
It had been three months since its birth. This young hawk shows off its growing wingspan high on the corner of a Sagewood apartment building. The spread of its wings rhythmically echoes the dual lunge of the huge building beams that spread below it.
2 comments leave a comment 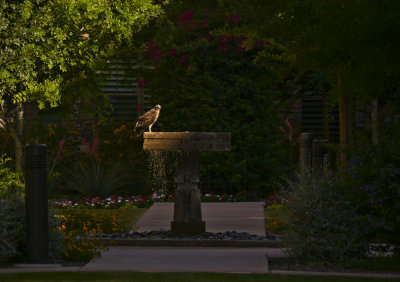 A lasting memory, Phoenix, Arizona, May, 2012
As the young hawks grew, their mobility increased, and they learned how to take advantage of the works of man. A few weeks before they left us, I found one of them brazenly drinking from an ornamental fountain in the center of a Sagewood courtyard. Instead of moving in on the hawk, I walked well away from it, and photographed it at a 200mm focal length. I used my spot meter to expose on the brightest part of this image, allowing much of the image to fall into shadow.
The result becomes a lyrical landscape image, as well as a documentary photograph. It places the hawk, illuminated by a golden shaft of early morning light, within the world it will soon come to know quite well. This fledgling will probably spend the rest of its life moving between the open desert and places such as this, where it will bathe and drink in water harnessed and displayed by man.
As May turned into June, the family of four hawks departed from Sagewood. The nest and its accompanying layers of guano were removed, and the apartment building was cleaned. No traces of these hawks are left. However our memories of the event, bolstered by these documentary images, will always remain with us.
10 comments leave a comment