Unfortunately it's not necessary to explain the difficult situation that we are all experiencing in these weeks.
Our lifestyle is necessarily changing to try to stem the epidemic of Covid-19; so we are asked to adopt a voluntary quarantine and remain at home.
As a consequence my photographic horizon has become very limited. Nevertheless I have decided not to give up, and I'll post, in this gallery, simple and quite unpretentious photos of my home space, with some thoughts.
It will help me to live these days in a slightly less gloomy way and it will make me feel in touch with all the people who will be so kind to visit this page. 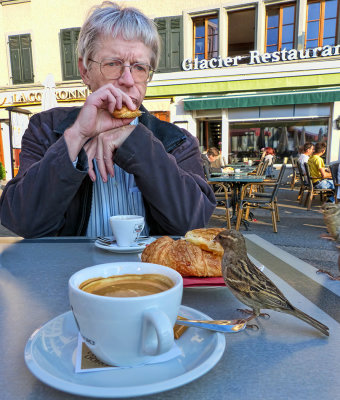 Hey you, have you ever heard of social distancing?
Breakfast at a side walk café table, after so many weeks of quarantine.

I'm afraid that sparrows have no idea about social distancing…

This gallery ends here.
Thank you for your virtual visits and for interacting with me so pleasantly. 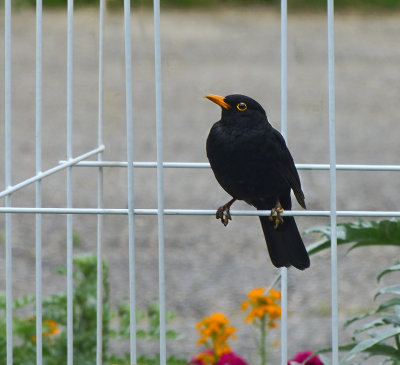 Uncaged…
This is the penultimate photo of this series and it coincides with the last day of quarantine in my country.
Tomorrow I hope to find a suitable subject for marking the end of this gallery.

It seems to me that this snapshot of a blackbird might be somehow symbolic.
It might represent the freedom of movement which we are gaining again.

I'm aware that life won't be the same anymore and we are not necessarily on the safe side yet, but things are settling little by little.
My fellow countrymen have been responsible and we have respected the necessary cautions.

Sometimes we are obliged to choose between freedom and security.
Nevertheless in this moment I cannot help thinking of one of my most distinguished compatriots, the philosopher and writer Jean-Jacques Rousseau, who wrote:
"I prefer liberty with danger to peace with slavery."

As always, our freedom should end where others' freedom start.
I let you draw your conclusions.

Thank you for keeping me company with your visits and comments. 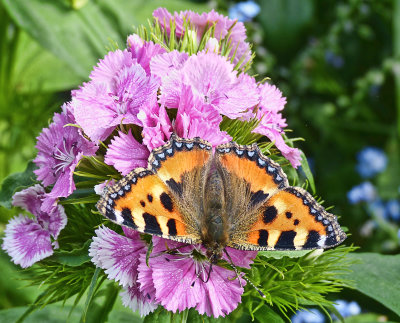 A different landing place…
There are many of these butterflies visiting our garden in these days.
Since my ignorance about butterflies and every other insect is deep and total, I thought it was a Monarch butterfly, at least until I found out that they don't exist in Europe.

So I have no idea about the real name of these tireless pollinators, but they are working very hard. They are not afraid to get very close; maybe we, human beings, are too big to be perceived like a menace.
We are like rocks or heaps of wood and, since we don't produce pollen, we are deprived of interest for these flying visitors, although for reasons I cannot guess, it happens that they rest for a little while on us, every now and then. 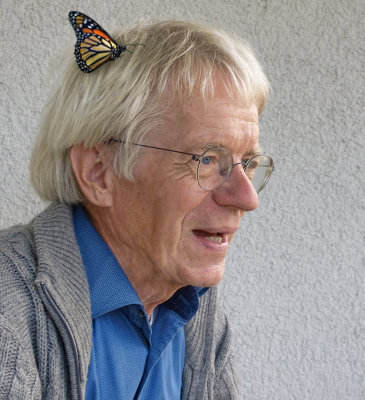 Don't move!
How does one become a butterfly?
You have to want to learn to fly so much that you
Are willing to give up being a caterpillar.

Don't waste your time chasing butterflies.
Mend your garden, and the butterflies will come... 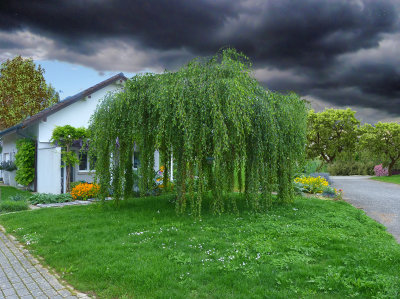 Who is afraid of big black clouds?
There are some things you learn best in calm, and some in storm.
Storms draw something out of us that calm skies don't.

Clouds come and go, always the same, always different…
Clouds cannot see what we do into the shelter of our home.
Clouds are thoughts without words 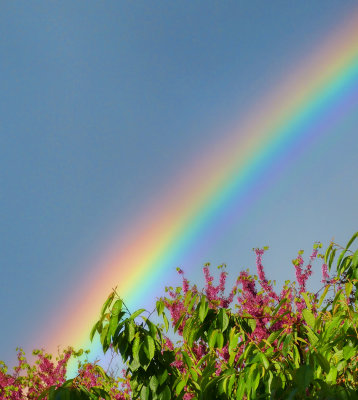 Rainbows apologize for angry skies.
After a debauch of thunder-shower, the weather takes the pledge and signs it with a rainbow.

The beauty of rainbows consists also in their ephemeral nature.
Johann Wolfgang von Goethe, who knew what he meant, said that after fifteen minutes nobody looks at a rainbow anymore.

Maybe the flaw is not in the rainbow, but in us, we, capricious human beings who often start finding monotonous everything that is regular part of our life, as if something new was necessarily better. 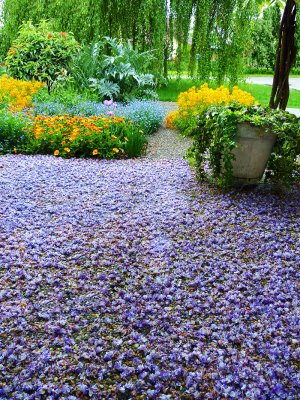 Wisteria carpet…
The rain made our wisteria flowers fall down, creating and ephemeral carpet leading to the garden.

"Beauty is not caused. It is."
(Emily Dickinson) 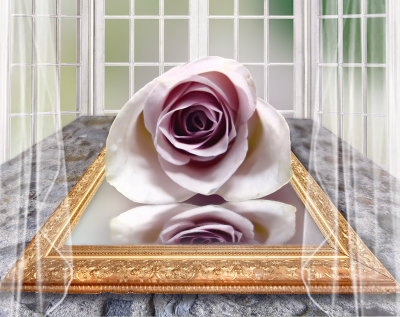 Illusions...
John Steinbeck used to say that the writer must believe that what he is doing is the most important thing in the world.
And he must hold to this illusion even when he knows it is not true.

It seems to me that this principle is valid for every creative activity.
We try to give a shape to illusions.
Illusions are not necessarily deceptive, if we are conscious that they are such stuff as dreams are made on (The Bard of Avon will forgive me for this improper quote).

When one illusion doesn't work then we become disillusioned and we go around with our antennae up looking for another illusion. 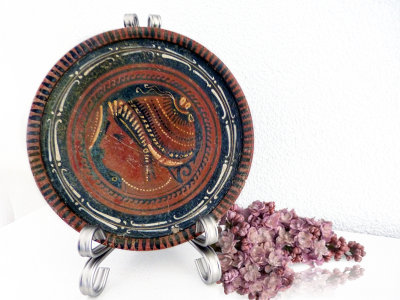 Etruscan terracotta...
The Etruscans existed in Italy before the founding of Rome and, although the exact date of their origin is unclear, it is known that they were a people with their own unique language.
During the peak of Etruscan power, around the time Rome was founded, the civilization spread to different regions from Etruria (that included today’s Tuscany, Western Umbria and Northern Lazio) to Campania.
There is evidence to suggest that the very area where Rome was to be founded had been also under Etuscan influence.
The various Etruscan tombs discovered in Italy over the years have provided a wealth of information.
Several elaborate tombs appear to have been built for entire families rather than an individual.

Unlike women in Greek and Roman societies, it appears that Etruscan women had a lot of freedom, which might have been misunderstood by the other two civilizations.
The Etruscans were also known for believing in the importance of the equality given to women within their society.

I'm so proud to have this terracotta Etruscan plate, which belonged to one of my mother's step-sisters.
Sometimes I wonder who made it…an artisan of remote times and I nearly feel dizzy, as if I sank back into the past. 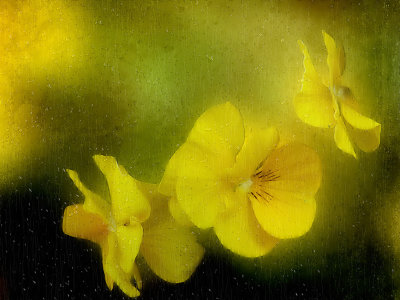 Rainy day…
Do not be angry with the rain; it simply does not know how to fall upwards.

Rain is grace; rain is the sky condescending to the earth; without rain, there would be no life.

Today is not a day for many words.
It's a day for silent inner thoughts.
Rain is relaxing, when you are at home, it favours a light form of meditation… 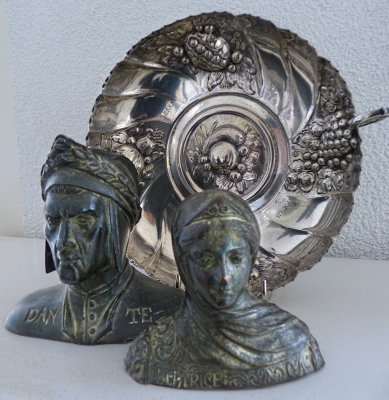 “Nothing is ever really lost to us as long as we remember it.”
I don't expect that any of you might waste time reading what I'm going to write.
Actually I'm trying to put my thoughts in words mostly for myself.

There is a little story behind these three objects.
When it's difficult to decide where to start from, it's always better to start from the beginning.

I loved one of my grandfathers in a very special way.
Both my grandfathers were uncommon people and had unusual lives; but here I mean to tell you about my grandfather Antonin.
I met him when he was already very old, since my mother was the last daughter of his second marriage.
He died when I was fifteen or sixteen, but I have unforgettable memories of him.
I think that, one of these days, I'll write his story.
Just to leave traces of him, or else he will disappear completely when I disappear too.
But it's not time for that yet.
It would be too long.

Two of these objects belonged to my grandfather Antonin and after his death they have always been with me.
There is a beautiful silver artefact, probably a fruit bowl, which someone had handmade for him.
There is my grandfather's family name carved on, Koska.
I don't know when it had been made and why.
I had always seen it at my grandparents' home.
Then there is this small bronze bust of great Italian poet Dante Alighieri (whom, by the way I like immensely).
My grandfather kept it on his desk, as paperweight.
If I close my eyes, right now, I can see clearly my grandfather's desk.
It was made of wood and had many small drawers and an amazing rolling shutter, made of wood too, to close it.
Often it remained blocked and my grandfather, who was a sweet and mild man, but became irascible against objects (never against people) that he insulted heavily in German, as if they could understand him, covered the poor piece of furniture with fanciful and creative swearwords.
But he was not really angry, not at all.
When he died I asked for only two things to keep with me, the fruit bowl and the bust of Dante.

But you would protest that in this picture there are three objects.
Right you are. We are coming to the point.

Many years after my grandfather's death I met a woman.
She was smart and well educated, but we didn't become friends, we were just acquaintances, rather good acquaintances, I might say.
Once, at her home I noticed, on the corner of a shelf, a bronze bust of…Beatrice.
Exactly the same style of my Dante. I decided it had to be mine, at all costs.
My Dante had been alone for decades, maybe for more than hundred years; nobody could say how long…He deserved to find again the love of his life.
I had to persuade that woman to give her Beatrice to me. After all her Beatrice had no story.
I asked her and she told me that it was a rather banal bust, which she had found, she didn't remember where either.
My Dante was part of my grandfather's story.

Once again my personal superhero made my wish come true.
The smart and well-educated woman came to visit us and, as all polite guests she wanted to bring something to the hostess; she had thought of something classy and artistic, maybe with flowers…Luckily she asked my husband for advice about my tastes and he, a real superhero, was ready to suggest she bring me her Beatrice.
She hesitated, she thought it was not an enough refined gift, but he insisted that I would be totally happy with it.
So Beatrice could join Dante.
I have lost contact with the smart woman for many years, but Beatrice is still with Dante and with me.

I have the impression that my grandfather is smiling now, with his ironical eyes… 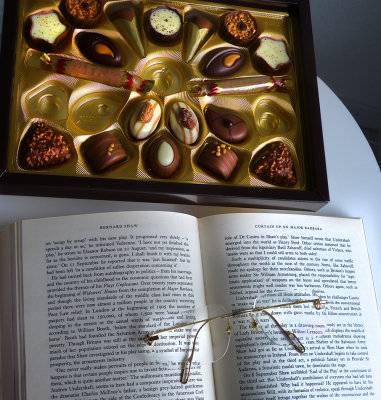 The best way to spend time in a rainy day...
Chocolate making is an art as well as a science, and chocolate makers keep secret the roasting temperatures used, the time given to "conching", and the exact proportions of their formulations, which is why no two manufacturers' chocolates taste the same.

After four chocolates reading is even more enjoyable.

Chocolate is comfort without words.
Reading is comfort through words.
A reader lives a thousand lives before he dies.... The man who never reads lives only one.
click on thumbnails for full image