As always click on any photo to make it bigger !! 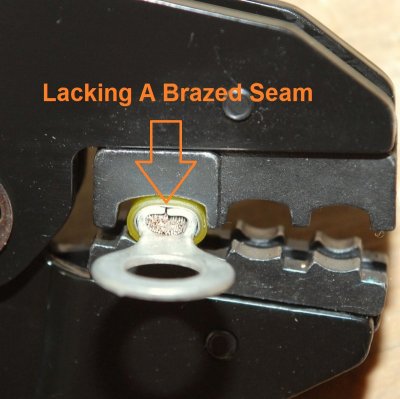 This photo shows a fairly even, but not perfect, crimp taking place.

What we are really looking at here is a run-of-the-mill quality three piece terminal. While it is a three-piece terminal, this one does not feature a brazed seam and we can see that even with a fairly even crimp the seam is beginning to open. Brazed seam insulated terminals, like the AMP PIDG terminals, cost more but are a better quality terminals. 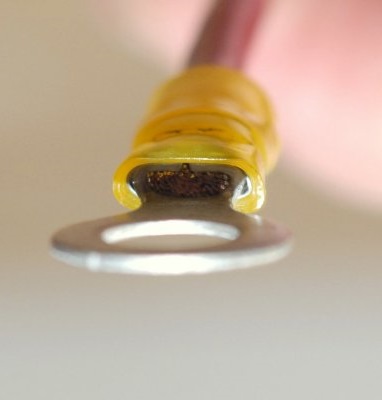 While this crimp was executed on an okay fashion, by the Ancor tool, it still lacks a brazed seam and will not yield comparable tensile strength numbers to a brazed seam terminal.

This crimp tool makes an "okay" crimp but not one that is equal to something that would be allowed in the aerospace market. Pair the Ancor with a brazed seam terminal and it can pass UL & even Mil-Spec on some sizes..

Profile View
Here you can see the "double" part of the double crimp. Both the barrel and the strain relief have been crimped thus the term "double crimper".

Once you choose a double crimp tool experiment with different brands of three piece terminals to find the best match. Once you have a good match stick with that terminal and that tool.

In the sailing & boating community I often find lots of skepticism surrounding crimped terminals. This of course is of little surprise to me, because the average crimp tool I see on boats I set foot on costs somewhere in the neighborhood of $4.50. I suppose I'd be a skeptic too especially if I'd spent less than the cost of a Whopper Jr. for my crimping tool. (grin)

After thinking about all the skepticism, I decided to do a little illustrative experiment to display the strength of a crimp executed with mid-grade crimp tool.

To do this I used the heat shrink crimp termination you just saw being made in the heat shrink terminal part of this article. The wire used here is 12 AWG UL 1426 tinned marine grade wire and the rather affordable FTZ crimp tool made the crimp. 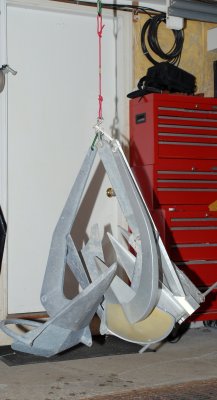 Pretty Strong!
This picture sums it up pretty well. A well executed crimp termination is much stronger than most ever assume.

Yes, you read it correctly, that 12GA wire and crimped heat shrink connector are supporting approx to 95lbs.

As shown this crimped butt splice, made with a $50.00 mid-grade tool, is exceeding ABYC, UL and DIN crimp standards.

FOR THE FULL CRIMP TOOL SHOOT OUT VISIT MY FORUM AND SEE THE VIDEOS AT THE LINK BELOW: 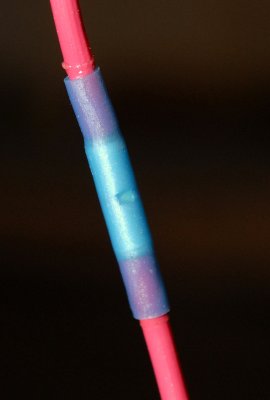 Another Test This Time With NO CRIMP
OK I wanted to test the strength of the adhesive lined heat shrink to decipher it's added benefit in overall total joint strength.

To do this I striped the wire as I would normally do then instead of crimping the butt connector I simply applied heat and melted the adhesive lined heat shrink around the wires jacket.

This photo shows the actual connection that I used in the photo below.

The Results !
I was quite impressed by the durability of just the adhesive lined heat shrink tubing.

The heat shrink alone actually held my 10lb Fortress FX-16 anchor just fine. I then tried my 16 lb. Spade A-80 anchor and the connection failed before I could even turn around and get my camera! Still ten pounds is not bad and it should certainly keep any moisture out. Interestingly enough a yellow terminal crimped with the "el-cheapo" crimpers from the first picture held less than ten pounds in my load testing. Based on that the adhesive is stronger than a cheapo pair of crimpers.... Ouch!!

So the failure point is somewhere between 10 and 16 lbs. static load, for just the heat shrink alone. 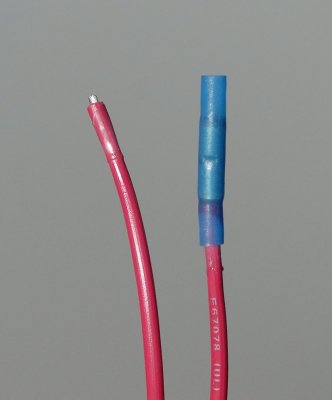 As you can see in this picture the jacket stretched, got thinner due to elongation, and pulled away from the adhesive. I had stripped that wire just like I would have had I been crimping it. Before the failure there was considerably more wire showing. If you look closely you can see the remaining adhesive beginning to fail on the end that had not yet come apart. 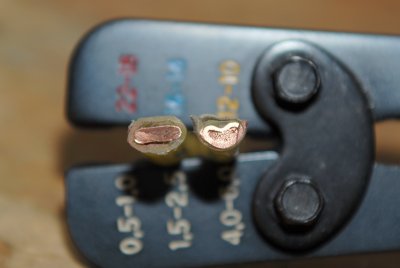 A Tale of Two Crimps
OK I did one last experiment. This time I made a crimp with my Klein crimper/strippers and one with the CMI Single Crimp Ratcheting Crimper. I then cut the crimped terminals open with my Dremel tool and took a peak.

I now understand why many boaters think "air" can get into a crimp and corrode it. If you look at he crimp on the right, made with the dimple crimper, you can still see strands of copper wire. The crimp on the left is far superior and has in fact cold worked or cold formed, into a near solid mass. While it is technically not a solid mass of copper there is almost no room for moisture or air to get in between the strands of wire and begin wicking. I think the photo speaks for its self and shows why a well built crimping too is worth the money.. 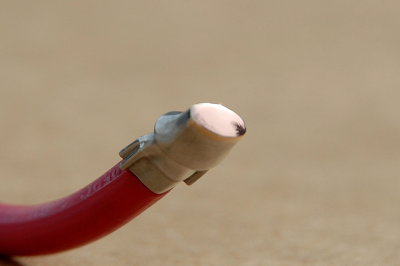 Crimp vs. Solder
This discussion has been beat around the net more than a tennis ball. I think the best statement on soldering a crimped terminal comes from the Senior Product Engineer Tom Michielutti at AMP. AMP is one of the most widely respected suppliers of crimp terminations to the US Aerospace and military sectors. Below is the statement from the senior engineer at AMP. NOT MY WORDS.

This subject is discussed in AMP’s internal “Fundamentals of Connector Design” course.

In the minds of some customers, fortunately a diminishing minority, the reliability of crimped connections can be improved by soldering. In fact, soldering can degrade the performance of properly crimped connections. Such degradation can arise from the effects of soldering temperatures, the potential corrosion from improper cleaning of soldering fluxes and the effects of solder wicking on the conductors. Solder wicking causes the multi-strand conductors, which have high flexibility and stability against vibration, to become, effectively, solid which degrades both the performance characteristics mentioned. For these reasons, soldering of crimped connections is not recommended.

Should Solder be Used in Crimps?

Crimps are designed to work without solder or solder-dipped wires. Solder present in a crimp changes the deformation, metal flow, cleaning, welding, and residual force characteristics designed into the crimp. Soldering would be an additional heat producing assembly step. Test results show that soldering or solder-dipping wires before crimping does not produce a termination superior to that obtained in a properly applied crimped termination. Some tests specifically show detrimental effects due to soldering or solder-dipping (e.g. soldered crimp terminations can lose some ability to withstand vibrations and flexing, due to solder embrittlement of the copper wire, and/or due to solder wicking up the strand of stranded wire to form a short length of solid conductor near the
termination). The terminated conductor then does not have the flexure strength characteristic of strand wire, and should behave more like solid wire which fails quickly in flexure testing."

The above is a direct quote from AMP.

PHOTO: The cut open pictured crimp was made with the tool on the left in the bottom photo. An AMP yellow PIDG terminal and an AMP crimp tool. This combination is certified for aerospace use. When crimped with a 12 AWG wire it will also withstand at least 190 pounds of pull out force and do so repeatably within a pound or two every single time. This is 80 pounds beyond Mil Spec!! 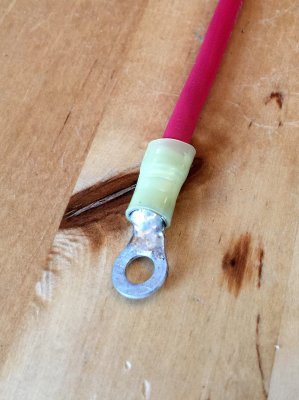 If You Still Insist On Soldering

Here is an example of what I consider a Mickey Mouse version of soldering but I see it. In this case I crimped first then soldered the exposed wire to the crimp barrel. If you get good at soldering this is not difficult but it does take practice to do on a boat and it does require a quality soldering iron.

It should be noted that the NASA, Military and Aerospace wiring standards specifically prohibit crimping terminals to solid conductor wire or to solder-tinned wire.

This is NASA's take on soldering solder-tinned wire:

"Solder tinned" wire is different than tinned STRANDING where each individual strand is tinned. Solder tinned means you pre-tinned the end of the wire before you made a crimp. DO NOT DO THIS.

If you insist on soldering the the quasi optimal way to do this (really there is no optimal way because you don't need to solder crimped terminals) is to crimp first then solder.

As can be seen with the right tools and technique you can solder the end of the terminal and not melt the insulator or wire. You won't achieve this with a $5.00 Radio Shack soldering iron. 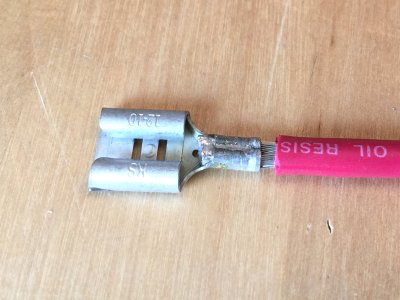 If You Really Must Solder

This type of terminal barrel lends much better to crimp then solder than do insulated terminals. This is a bare non-insulated "B" or "F" type crimp terminal. You crimp it with the correct tooling then apply solder to the very end of the wire and let some flow into the "B" for butt cheek.

NOTE: Please take note that in this image, and in the last image you saw, proper crimping has not allowed solder to flow beyond the crimp-band. Solder that flows beyond the crimp band would create the proverbial "hard spot" which ABYC and other standards want to avoid.

If you use the proper tools, the solder should not flow beyond the crimp-band to the part of the wire that needs to remain flexible. If you use Dollar Store grade tools well, sure, you can create a hard spot and the wire could fracture.
This type of crimp takes yet more tools in your bag, terminals that are harder to find in a good quality level, you will need to self-insulate the terminal and it takes considerable time to execute properly.

IMPORTANT: I do not recommend nor suggest doing a crimp & solder as it is really unnecessary IF you use the right tools to begin with.
click on thumbnails for full image