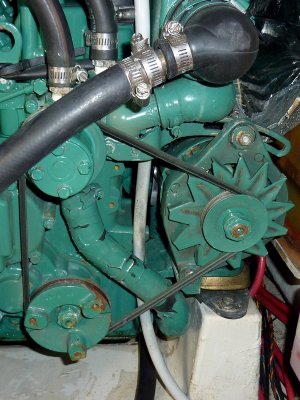 The Stock System
WARNING: This article includes equipment sold by Electromaax and I must preface this post with some cautions.

Since writing this article I have received lots of complaints of poor customer service regarding Electromaax and their other shadow companies. Please be careful these complaints are still coming in even in 2017 and this article was written in 2011.

I had personally received decent service, but I am an n=1, and a dealer, and a guy with many articles out there so I may get better service than an individual customer. I simply can not ignore the complaints, and must be honest with my readers. I have had more complaints about Electromaax than any other product or company than I have ever written about. A SHOCKING NUMBER.. Please do your own home work on Electromaax customer service.

There are other companies producing similar products, namely Balmar and Mark Grasser DC Solutions, both of whom have excellent customer support & considerably better track records for customer service. I am not saying don't buy from Electromaax, just letting you know a fair number of boaters have not been happy with their customer service.

The owner of this boat keeps it on a mooring and as such his stock charging system was proving to be inadequate for his family's use. Having recently upgraded his battery bank to TPPL / AGM batteries he was in need of an alternator makeover... 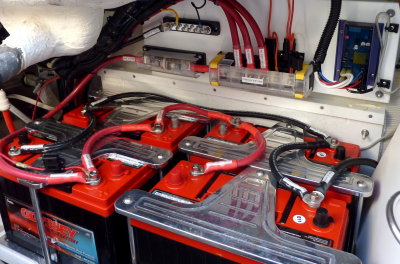 The Battery Bank
His bank of batteries is a large bank of four group 31 TPPL (thin plate pure lead) AGM batteries made by Odyssey. The bank is 400Ah in total but can also accept about 320A of charge current on the low end of acceptance, in bulk mode and over 1200A on the high end..

Contrary to popular beliefs and/or misconceptions about batteries and alternators it is the battery that "takes" or "accepts" current from the alternator. The alternator does not "force" current to the bank. The alternator only follows what the batteries want, up to it's limits. In this case the batteries, in bulk mode, or what is commonly referred to as constant current mode, will take far more than any alternator that could be fit to this engine can, or could deliver.

With a bank of four PC 2150M batteries, which this boat has, they can literally accept 1240A of charging current. Unfortunately there is no charging system available for a sailboat that can supply that kind of charging current. If there was, you could literally charge from 20% of capacity to 80%, or replace 60% of your banks capacity in TEN MINUTES. Wow....

Like any AGM battery these TPPL batteries can take massive amounts of charging current tapping out just about any stock alternator, and exceeding in acceptance, the output of just about any alternator that would fit onto this engine. This is why I feel it is important to use a serpentine kit and do a proper installation that can handle these batteries.

Over the years I have seen many stock alternators burned up by the high acceptance rates of AGM batteries, and Odyssey's are no different. They really need to be fed with a charging system than is designed for it and can handle them.

With the owners stock crank and water pump pulleys sized for a 3/8" v-belt he was really limited to about 80A of charge current at a maximum, in an alternator output, before the belt would begin to wear quickly.

We discussed the options and decided on an Electromaax 140A alternator and the Electromaax serpentine pulley kit was a good fit. We could have gone bigger but it would have meant a bigger HP bite out of his relatively small propulsion engine. 140A is a good fit.. 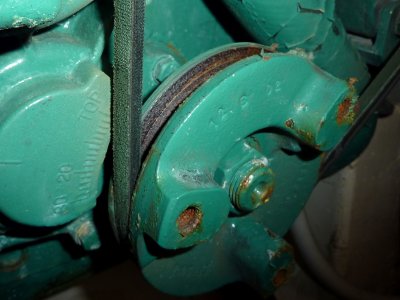 The Problem
When I began to examine the layout of the pulleys and engine I was concerned an E-Maax kit would not work or fit. The timing marks and stock crank pulley are very, very close to one another. The design of the Electromaax pulley kits are ingenious in that they simply fit over the main crank for an easy install. This is good and bad for some motors as they make the crank pulley slightly larger.

I shot some photos, took some measurements and I picked up the phone and Called John one of the owners of Electromaax. 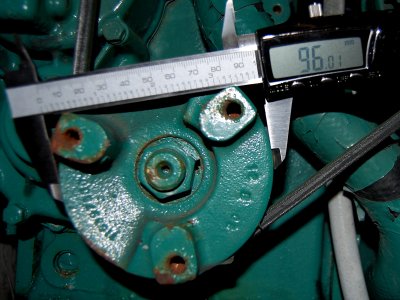 Measuring The Crank Pulley
After emailing John the photos he assured me they had made a kit for a Volvo MD2030 before, "no worries mate".

When it came time to order the kit "No worries mate" became "worries mate". The engine E-Maax had done a kit for was similar but larger in horse power. Both Volvo engines had different crank pulleys and that kit would not fit this motor. A miscommunication internally at E-Maax gave me wrong information. Of course I have already quoted the customer so ....... Argh......Delays.... 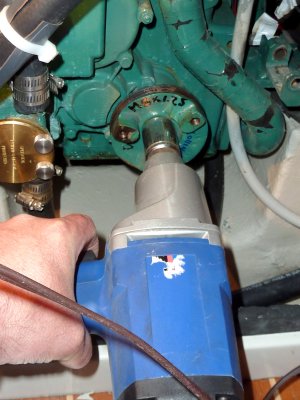 Remove Factory Pulley If Needed
I had a long discussion with Rob and John at Electromaax and they were convinced they could pull this kit off. I removed both the water pump and crank pulleys and shipped them off to Electromaax using their Buffalo, NY shipping address to save money. Electromaax is a Canadian company but they have a US address which makes it convenient.

To remove a crank pulley you'll likely need an impact driver. I find this electric one works wonders and I don't need to tote around an air compressor.

To get the pulley off the crank you'll need a gear puller. I used my two jaw puller and it popped right off.

If Electromaax has a kit already made for your engine you will NOT need to do this step. I helped Electromaax develop this kit for the Volvo MD-2030.. 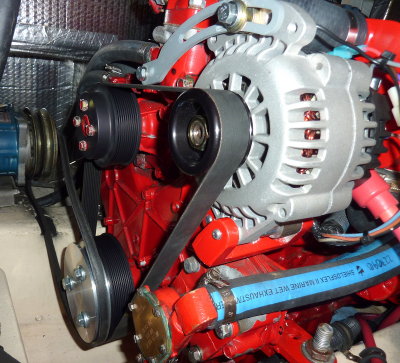 A Pre-Made Kit
As I mentioned Electromaax has lots of kits already pre-made for lots of marine engines including Yanmar, Universal, Westerbeke, Nani, Beta, Volvo, Perkins and more..

This happens to be a Westerbeke kit with a 160A alternator. Notice that all three pulleys are anodized black. The kits come complete with the pulley's alternator, bolts, two belts, regulator, Loctite and Tef-Gel.

The silver colored pulley is not an Electromaax product it is an added pulley for the Sea Frost engine driven refrigeration system on this boat. 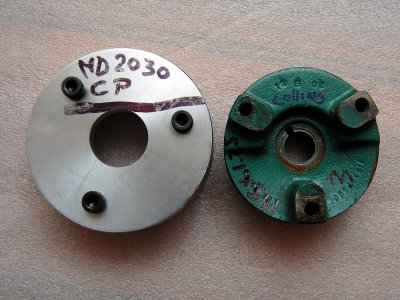 Serpentine Pulley & Factory Pulley
If you are helping E-Maax create a kit for your engine BE PATIENT. It took me five weeks to get these. If developing a kit wait until your off seasons. There can be multiple trips back and forth to the manufacturer before everything fits just perfectly. 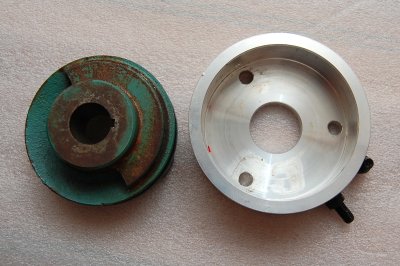 This is the back side and you can see how easily the serpentine pulley will slide right over the crank pulley. 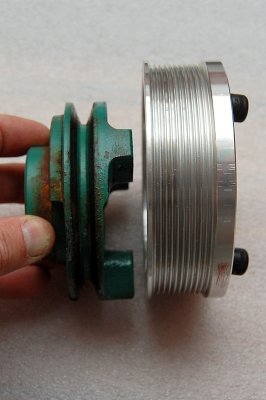 The New Pulley Just Slides Over

It just slides in like this. Take a look at the difference in surface area for the belts. 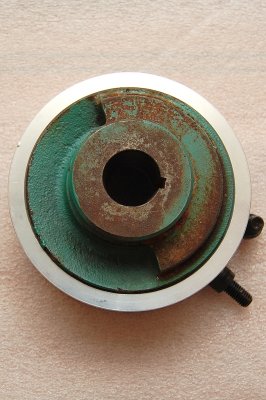 Here the crank pulley is in the new serpentine pulley. When you buy a pre-made stocked kit the pulleys will be anodized black. E-Maax will anodize your "developed" pulleys after the fit is "known" to be good.. We are waiting until the next off season to send the pulleys for anodizing. 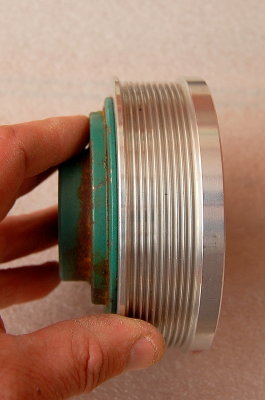 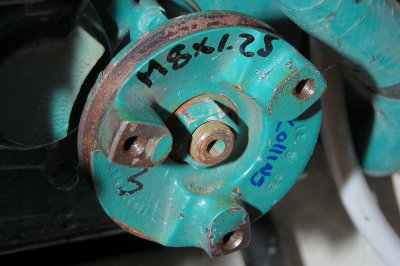 To Install the kit you'll first need to re-install the crank pulley (only if you have developed the kit with them). To do this the a torque wrench is required. Torque the crank pulley to the manufacturers suggested torque which can usually be found in the engine service manual or often the owners manual.. You may need to lock the engine in reverse or use a crank bar to hold it.
click on thumbnails for full image