Test Run for the She Beast 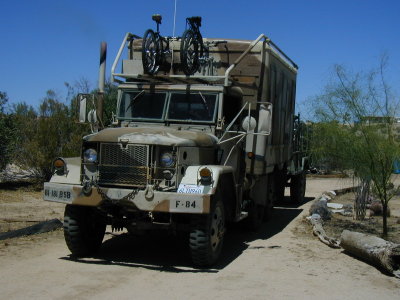 Out of her corral at last!!!
The "She Beast" rolls out of our self-made oasis. Just days before we had pulled the tranny, again, hoping to find the source of it's continued leaking into the clutch. Seemed the previous Mech-Master had been fond of gasket in a tube . . . he had filled a gear oil return hole, causing it to drain into the clutch. We were also rolling on narrow tube-type tires, the goal had been to have 14" wide radials on custom wheels . . . they have not arrived . . . and we have an ETA in the northern Great Basin that we can't push much.
Load two spares and we're off.
For this run we are packing 2x 15gal tanks of potable water (in the truck) w/ a 12volt dc pump routed to the sink, and 1x 15gal (empty) + your basic 5gal w/ a spout for wash water (on the trailer). 50gal of fuel in the tank of the truck, another 35 ~ 40gal in one of the tanks on the trailer. 14gal propane, running to a 3 burner, built-in, stove. We went w/ the "insulated box" version over any form of powered refrigeration. Our cooler was one step above "basic", it was an "Extreme!" . . . It seemed right.
On the rack were our emergency way out, our rides. If you get a rig this size stuck, or brake something, no little truck is going to get it out, and rarely are we more than 100 ~ 150 miles from somewhere. We could ride that in two or three easy days. Mtn Bike Camping is something else that we do.
There are also 2x 6volt batts, wired as 12volts, to power anything that we might want in the back. They are living in an armored milk-crate mounted to the rack. At the moment there is no charging source ( I do have a 12volt alt that I'm going to mount at some point, the truck is 24volt) I did pull the solar panels off my E300, which have mount points that work w/ the bike mounts :) When we stop and off-load the rides, we will be able to mount and plug in the panels.
Total trip should be around 1500 miles.
0 comments leave a comment 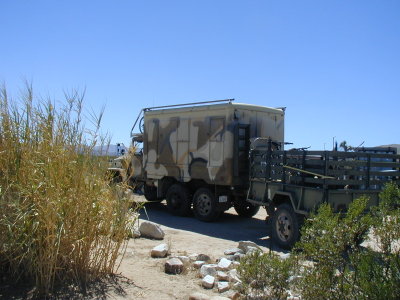 the `Sketer
The trailer that we are pulling is more than "just a place to carry more stuff", it's really our "alternative fueling station". Being that these beasts will eat most anything made of petroleum, think more mule than race horse, we have set up the trailer to process and store these fuels as we find them. At the moment the trailer is able to store about 100 ~ 120Gal of filtered and water separated fuel. It can also run the processed fuel straight to the tank of the She Beast.
On the trailer, that I've started calling the "`Sketer" ( it reminds me of a blood sucking mosquito when I have the probe down in some drum, or tank, and can see the fluid being drawn up and through the filters) we are also packing the extra spare, the solar panels, an extra 24volt alt (the stock one has a crack), a full set of filters (6) for the beast, our shade canvas & poles/fittings, a solar water tank (15Gal), 2x 5Gal buckets, filled w/ sand and planted w/ aloes & succulents, that we use as our greywater filter, two more rides (the reason comes later) and camp chairs, among other things. We are also packing a lowtech "no trace" fire barrel that leaves no ash or burn scar behind. This is going to be a lowtrace trip w/ little to show of our passing though.
1 comment leave a comment 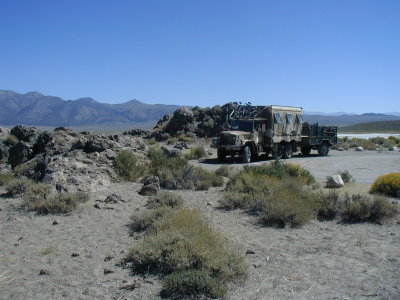 Camped at the springs
Distance 309 miles
Our first night out we stopped at some hot springs that we know in the Eastern Sierras. After a day of slipping clutches (still dealing w/ the oil from the tranny leak being on the clutch, I have used up a few cans of brake cleaner but the bell housing is almost totally sealed save for a drain plug) and running at near max RPMs for most of the day, while climbing a few thousand feet, she deserved a good stopping point where I could do a full check-up. This was probably the longest trip she's done in the last few years, maybe more.
The next day we spent enjoying the almost 5K' elevation gain and being away from the "Oasis". Now all those un-finished things would just stay that way until we returned. That night there was a record cold, for this day, of 39°f.
0 comments leave a comment 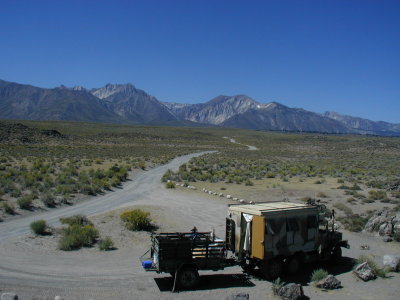 Eastern Sierras
Tomorrow we head back toward the pavement. Time to work our way up to the Black Rock Desert.
0 comments leave a comment 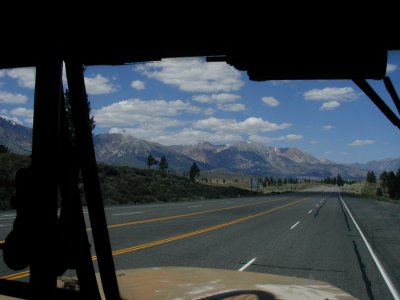 Pavement
Back on pavement we head north.
0 comments leave a comment 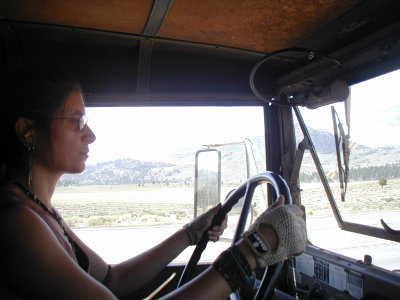 Change of Drivers
The first day out I drove, wanted to check out loads of little things. It was only days after the last tranny pull, we were still losing some gear oil into the clutch (which made for some fun hill climbing), had started to leak from the rear main on the engine (more oil on the clutch). Was probably the first time in several years (or longer) that she had run at 2400 RPM for hours and hours. That can be hard on some seals. The fuel trailer was leaking from one of the filters, a valve on the bottom to drain water would not stop draining . . . everything.
The tranny had leveled out and did not seem to be leaking, . . . but the engine was dumping oil into the clutch instead. I could tell . . . it smelled different. I checked and we were down about a gallon engine oil (about the same as being down a quart in your little personal transport). I had been waiting for this and added a gal of lucas that we were carrying. I also rigged up a way to catch the leaking filter's loss.
Today I felt that the rig was not going to have any major problems and I handed the driving over to Tuff. She got to play with the slipping clutch . . . it only happened on climbs . . ., and it was a great way to learn how NOT to slip it.
0 comments leave a comment 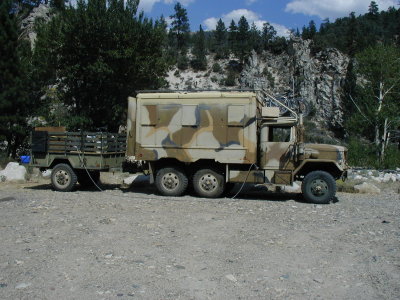 Fuel Stop
It was time to test out the fuel trailer. We had used it a few times before the trip . . . but not really.
In reality we waited too long, we were down to a 1/4 tank . . . in a 50 gal tank. We dropped the "dip tube" into one of the three tanks on the trailer, hooked the airline to the truck, let it fill the under-body air tank, open the valve to the pump and ran about 25 gals into the tank on the "She Beast". While that slowly pumped fuel we had tea and something to eat.
It was bad fuel! We had pulled a batch of heating oil from someone we knew . . . I think it was ancient!
The rest of the day was spent with a very colicky mech monster. We thought that climbing hills with a clutch that wanted to slip was tough, now this. 2nd gear hill climbing at 15mph was often the case . . . and we only had a few 8000'+ passes to climb through.
After conquering all the passes, and rolling into one of the ranch-land valleys, we found a mech parts place. We loaded up on some more brake cleaner, a fuel treatment (enough to treat 100 gals . . . we added all of it), and some other odds & ends.
I also bled the primary fuel filter a few times to see if we were getting water in the fuel. That seemed to not be part of the problem.
Another 50 miles, or so, and we added half a tank of diesel (25 gals).

By that night she was feeling better, not perfect . . . just better.
0 comments leave a comment 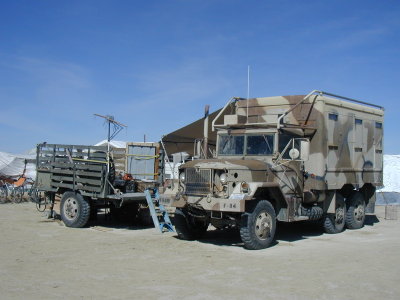 BRC Camp
After our drive up we were happy to be able to set up camp and know that we weren't going to be moving in the next couple of weeks.
We off-loaded the fire-barrel, pitched our canvas shade (for the first time), set up our plant based greywater filter, and did all the rest of those little things that make camp comfy.
0 comments leave a comment 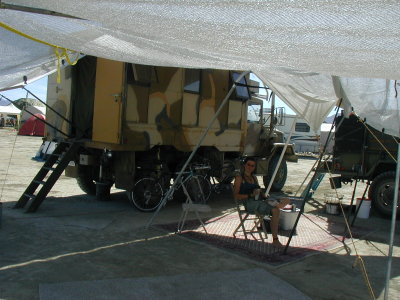 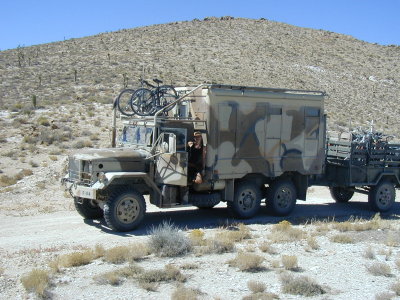 The past day had been one of travel through some dark swamp of issues, frustrations, and just personal problems.
It started with a slipping clutch in the mountains (we were on a dirt road), progressed into a non-stop all day drive (forget breakfast,. . . or any other meal), and finely ended, . . . parked off the side of the pavement, outside of an almost total ghost-town.
Today started better.
We urged the "She Beast" into town, parked off the side of a dirt road, and started our walk-around.
Couple hours later we had, with the help of charm & charisma, feasted on low-grade burritos and gotten some info on the backway into Death Valley.
Our plan was to follow some dirt tracks and wash-roads into the north end of the valley. Working our way south we would pick up larger roads until we were back on pavement.
The first part of that . . . to find our way through the maze of tracks that spiderweb the outlaying land that surrounds small mining towns like this.
0 comments leave a comment 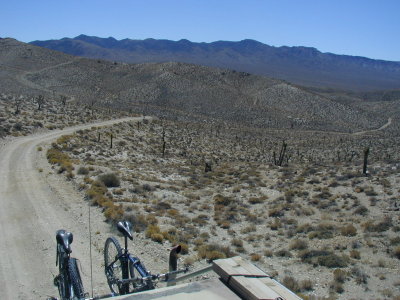 We crested a ridge and could see our path ahead for the first time.
From here we would wind our way down the valley until we meet the north end of what would become Death Valley.
0 comments leave a comment 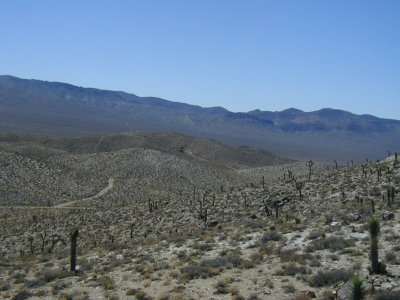 The track winds out of view.
0 comments leave a comment