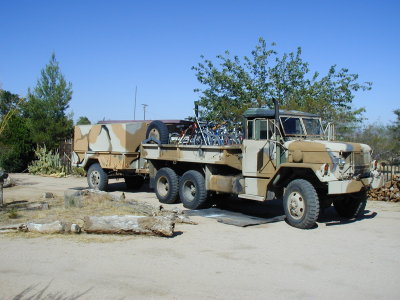 Packed!
It's only 11 days after our target date.
Something about wrangling two trucks, two trailers, and bringing what's needed for the "Team" that takes longer than I imagine it should :-/ It doesn't help that I acquired my trailer a couple weeks ago and had to change tires/wheels, strip the inside, do a bit of insulation (that will get finished later), do a minor build inside . . . so that I can camp in it, and paint it.
So that makes our caravan 2 big trucks, and 2 trailers, a year ago it was half that, . . . and last winter it was two trucks and one trailer . . . , . . . do we see a pattern here?
Both Beasts are still feeding on "wildcrafted" fuel . . . that makes for a lot of "hunting".
The little Draggin' is loaded w/ the back-up fleet for the Rapid Response team that I created, and coordinate now. I'm also in charge of our bike maintainance station, . . . which is my camp.
0 comments leave a comment 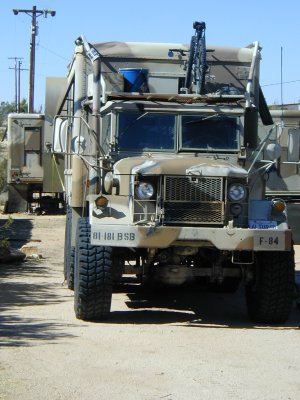 Waiting . . .
The She Beast is ready and waiting on her new rims and tires.
This will be Tuff's first long run with a trailer.
With this combo that's not a problem going forward, . . . backing, that's a challenge for even those that are used to pulling with a standard truck.
The trailer is too short for the wheelbase of the truck, and now we've added BIG, FAT TIRES to the manual steering.
Of course she's been learning to maneuver with this set-up, . . . some day she'll get hold of a good combo and really amaze people.
0 comments leave a comment 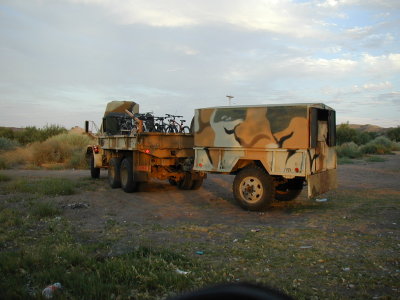 The first night out we found a spot on the edge of the park. Our goal was only to get away from our Oasis, and get as close to the `Zona line as we could before dark (someday I'll do something about those lights on the Draggin').
That would let us get to the `Zona DMV early enough that we could get out of town before mid-day and put on some miles in the right direction . . . North.
I needed to get a reg on this new trailer I'm pulling, and heading East to the Colorado river (at 400' and triple digits) is the closest office.
Not too many feet away from our rigs that night was a line of "T stakes that had been driven, as a barrier, across the dirt track . . . PARK BOUNDARY. The track was now getting wider at that spot (like anything that gets dammed) . . . enough room to turn around . . . a camp space starting to happen on the edge. It's becoming an un-official trailhead.
Now most will walk from here to the hill size pile of rocks that the track went to before the damming, . . . others won't, they'll make a way around. Of course they may have been here since before the Park was a park and have been driving out here for most of their lives, . . . hard to know.
The next day the Draggin' started a little weak. Watching the gauges on the way to the river caused a bit of concern . . . he didn't seem to be charging.
After some "hoop jumping" and some "paper signing" at the DMV, they gave me a paper tag. ". . . put it in a freezer ziplock and tape it to the rear . . ." RIGHT!
I stored it safely in the map box, and while we were at it we plotted a route, had some food, and got ready for a day of driving.
Firing up the Draggin' brought the sound of a diesel turning over way to slow . . . damn. Two trucks pulling two trailers, and where's my multi-meter? Right . . . not w/ us.
So now the plan changes to " find a good site, to our north but NOT too far from parts stores, to be broke-down".
0 comments leave a comment 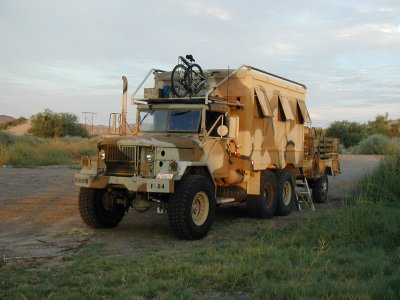 A block off the highway I see an access to the river with space, . . . enough space for our whole caravan and then some. I do some hard brake and lane changing that leaves Tuff flying by. I just figure that I'll scout it before she gets turned around.
After guiding the lil Draggin' off the pavement and having a look, I'm thinking this is the place . . . the place to be "broke down".
It's an river access ramp on the edge of the developed area . . . definitely room for us, and not far from the town.
When Tuff returns I guide her into a space on the edge.
Now it's just wait `till the drive unit cools off some and do some checking.
While I wait I jack-in with one of our terminals. I'll see if I can get some more info on troubleshooting this without a multi-meter.
0 comments leave a comment 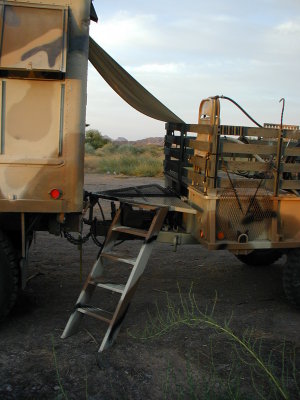 Our new deck!
While here we drop the deck into position.
This is the second deployment of the new deck and we are really liking it! We had it made right before departing on this adventure and are still in the testing phase.
Last summers trip w/ this trailer taught us that you can NOT use the ladder with a trailer attached. Getting in and out involved climbing around on the tongue with the landing gear and air/electric lines. Not an easy thing to do in the night.
Our solution was to design a deck that would fold down from the front of the trailer that we could connect the ladder to. Now it's easy to just step outside and take the ladder to the ground. No longer do we have to risk maiming or death just to get outside, . . . at least not from that.
0 comments leave a comment 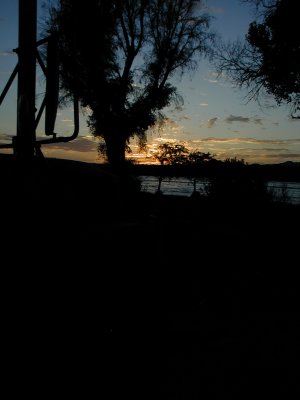 As the sun departed the sky we knew that we were here for the night.
Earlier we discovered that we were on the rez. An officer stopped by to let us know that they charged $15 to park for the night. We then spent some time talking about where there was BLM land (no fees)and how best to get there.
As she left she complemented us on our "rides".
Over the rest of the day we debated whether, or not, to stay here. By now we knew that I had a bad alternator and had decided to pay the $15, the most expensive camping around and they offered nothing as far as hook-ups, or tables, or fire rings, or . . . , etc.
It would be worth it not to have to move.
0 comments leave a comment 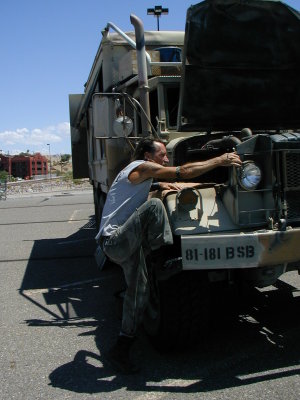 Today I'll figure out how to bypass the starter relay.
Yesterday morning started with me deciding that I could continue on by just jumping the lil Draggin' off of the She Beast to start it. After that it doesn't need any power from the alt, that's only used by the brake lights, turn signals, and the in-tank fuel pump. I know the injector pump will pull fuel when it's running and can do without the in-tank one.
So we connect the jumpers for a good 10 mins while the She Beast is warming up. The Draggin' fires up, warms up, and we're off.
At some point later in the day I pull into a lot so that we can check the maps. While there I think ". . . that inside bathroom might be a good thing . . .", when I return we do a bit of planning our next stop. Some place that we can be till Mon., that will be the next time the shop are open and we need to harvest some fuel. All decided we climb in and . . . the She Beast doesn't fire, doesn't even turn over! So now we have one that won't start and one that needs to be jumped to start.
~ ~ ~
Time for plan "C".
We recruit "security" to be our flashing amber, fire up the Draggin'(still enough charge for that), hook up the chain to the She Beast, and have a "convoy" around the lot. Once we're on the far side we claim some space for the night. 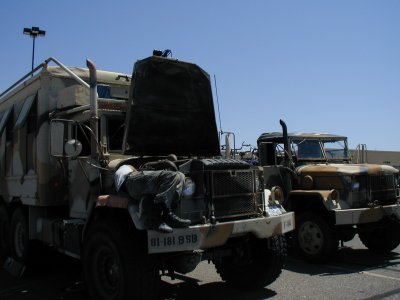 Altering some nerve connections
After a night spent off to the side of the lot, the spot that we decided would be the most out of the way, I start searching among the wiring.
Some back and forth com traffic had clued me into a way to bypass a relay. The wire ended up being to short, time to make a new one.
0 comments leave a comment 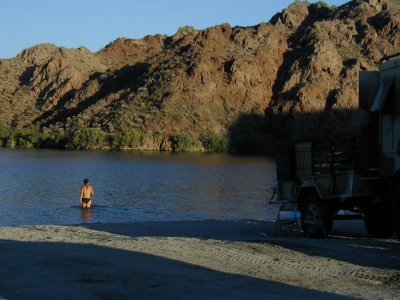 Finely, a real camp spot
By the end of the day we had made it out of the developed areas.
Some map staring had given us a lead on what ended up being a rather nice cove on the west side of the river. It was close enough that we could get back into town for some fuel harvesting once the shops opened, and a wonderful relief from the triple digit temps.
0 comments leave a comment 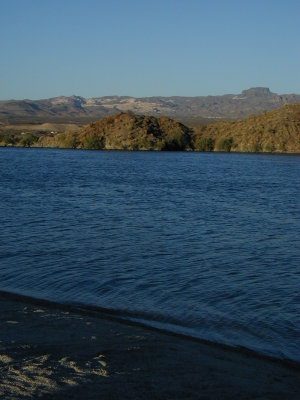 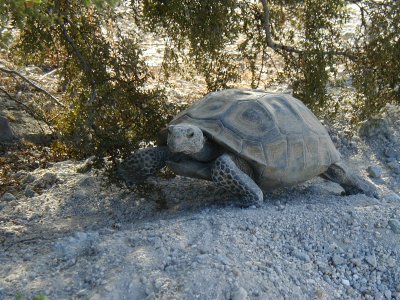 Visitor
We decided to stay for a few nights after doing the "town run" and coming back w/ full tanks.
Water like this is a real gift during a desert summer. It's one of the few rivers that runs all year in either of the two SW deserts.
The morning of our departure we had a visitor, a desert tortoise, wandering calmly among the rigs. After checking out the area it headed back into the dez.
0 comments leave a comment 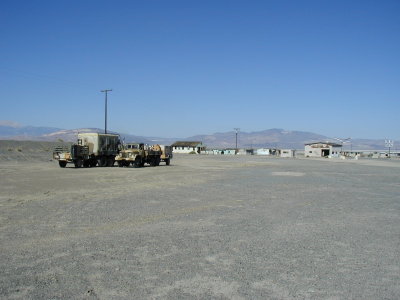 Back in the Wastelands
After a diagonal run across the state, avoiding aliens on the "Extraterrestrial Highway" (though we did get our image captured by the "Photo Tourists") and away from the cooling river, we ease back into the Wastelands.
This burned out complex at a road junction looks good for the night. This is the only thing we see in the whole valley.
0 comments leave a comment