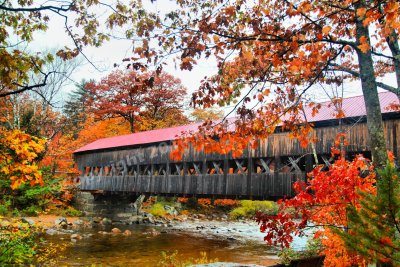 Albany Covered Bridge, White Mountain National Forest, NH
State of New Hampshire: Location:
Just north of the Kancamagus Highway, six miles west of N.H. Route 16 on Dugway Road in Albany spanning the Swift River.
Style of Bridge:
Paddleford truss with added arches
Year of Construction:
1858
Original Cost:
$1,300
Structural Characteristics:
The bridge is 120'0" long with a clear span of 100'0". It has an overall width of 21'0" with a roadway width of 15'3", and a maximum vertical clearance of 11'0". It is posted for six tons.
Maintained By:
Town of Albany
World Guide Number:
29-02-06
New Hampshire Number:
49
Historical Remarks:
The first bridge on this site was constructed in 1857 and destroyed by a windstorm in 1858. At that time, Amzi Russell and Leandre Morton entered into an agreement with the town to build a new bridge for $1,300 minus the amount previously paid for the original bridge. The bridge has wide shallow arches and sharply raked facades. The U.S. Forest Service replace the wooden floor timbers with steel in 1981-1982. Near the bridge is a mud sill, taken from the bed of the river by the U.S. Forest Service, which probably supported the falsework or scaffolding during the construction of the span. The Albany Bridge is eligible for listing on the National Register of Historic Places.
0 comments leave a comment 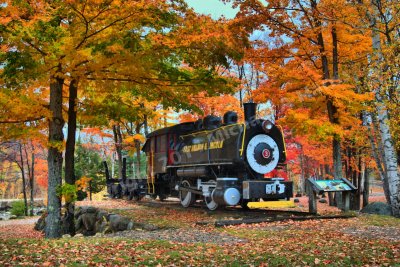 East Branch and Lincoln Logging Locomotive, White Mountain, New Hampshire
The East Branch and Lincoln Railroad
by Bill Gove
The East Branch & Lincoln Railroad, built by James E. Henry, was the largest logging railroad in New England, covering about 72 miles, sidings included. And the railroad lasted far longer than any other logging line in the region. Construction began in 1894 and continued sporadically over a number of years. The last train chugged out of the Lincoln woods in 1948, fifty-four years later .Lincoln village was the site of a large sawmill and later a pulp mill and a paper mill built by James E. Henry. Henry’s efforts created the large municipality of Lincoln, NH , arising from a wilderness home site in the 1890s.
A large array of locomotives ran on the East Branch and Lincoln Railroad, more than any other logging line in New England. J. E. Henry’s operation used about seven locomotives, all ‘rod ‘engines with saddle-tanks. The Parker Young Co., a later owner, employed three Shays, one Climax and five “rod” locomotives, four of them left over from the Henry days. Logs were hauled on individual log trucks or disconnects, and link-and-pin couplers were used right to the very end.

The entire operation was purchased by the Parker Young Company in 1917 and then later by the Marcalus Manufacturing Co. in 1946. Even after the end of the poorly maintained railroad in 1948, the paper mill struggled to continue on in operation until 1980. The failure to meet EPA pollution standards at the mill, followed by the closure of the Boston & Maine Pemi Branch, doomed the paper mill.
0 comments leave a comment 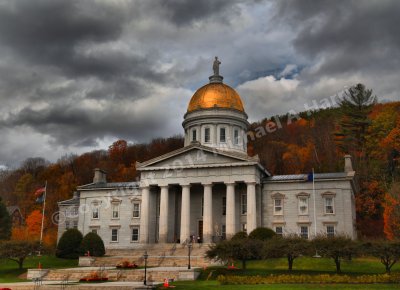 State House Building, Montpelier, Vermont
From Wikipedia: The current structure was designed by architect Thomas Silloway (1828–1910) amplifying the design of an earlier structure designed by Ammi B. Young, (1798–1874) later supervising architect of the U.S. Treasury.
And roofs were originally painted a dark terracotta red to suggest Tuscan tile. The dome was not gilded until the early 20th century, when many states did so as a part of the Colonial Revival style. The dome is topped by a statue named Agriculture, a representation of Ceres, an ancient Roman goddess of agriculture. The original statue was carved by Vermont artist Larkin Goldsmith Mead, who also carved the large bust of Lincoln in the Hall of Inscriptions on the State House's ground floor. The current statue is a replacement, and something of a piece of folk art, based on Mead's original. It was carved in 1938 by then 87-year-old Dwight Dwinell, Sergeant-at-Arms (in Vermont this official position is similar in nature to the White House Chief Usher).
The Doric portico, the main ceremonial entrance, houses a granite statue of Ethan Allen. Ethan Allen was a founder of Vermont and commander of the Green Mountain Boys, an early Vermont military infantry active during the Vermont Republic, (1777–1791). The statue was carved by Aristide Piccini in 1941, to replace the original marble version carved by Larkin Goldsmith Mead in 1858. The architect Stanford White (1853–1906) considered Silloway's Vermont State House to be the finest example of the Greek Revival style in the United States.
0 comments leave a comment 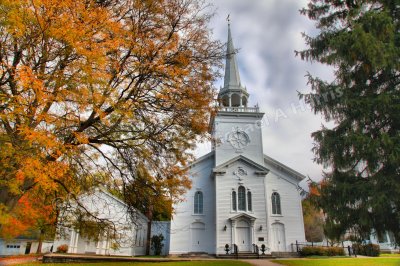 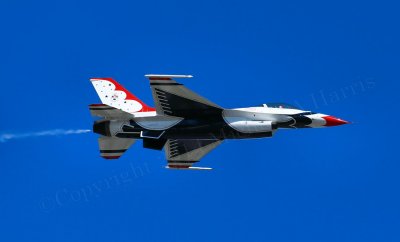 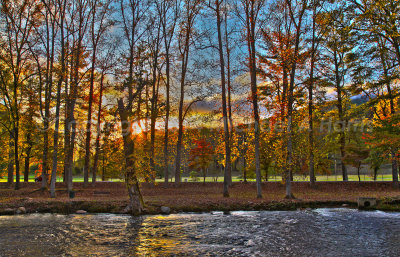 Cherokee, North Carolina
I've been going back over photos I've taken the past couple of years... pulling out favorites... So consider this my "Throwback Thursday"...:)
1 comment leave a comment 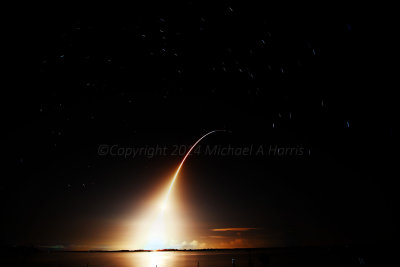 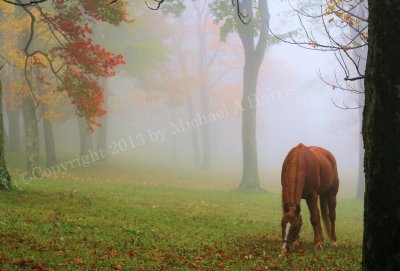 Horse A midst the Fog
Taken along the Lincoln Highway between Pittsburgh and Bedford, Pennsylvania.
3 comments leave a comment 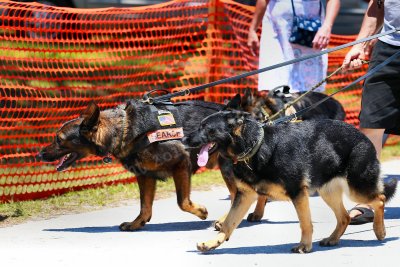 Pups!
Service dogs walking through the Veteran's Reunion at Wickham Park. This is an annual event and features 'The Moving Wall' - a replica of the Vietnam Veteran's Memorial in D.C.
0 comments leave a comment 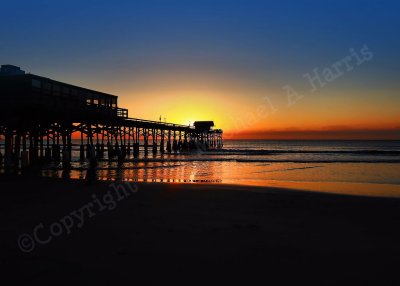 Sunrise at the Cocoa Beach Pier
0 comments leave a comment 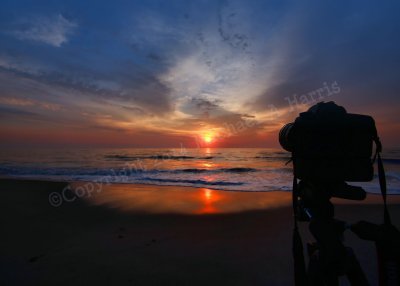 To Catch a Star
The unsharp mask was probably a little high. It makes the edge of the lens look copied in. But this isn't a composite. That's my 5D on the tripod, taken with my 6D, handheld.
0 comments leave a comment