The Crescent City***Ready For A Parade? | FLORIDA: Seeing In Threes | Nudes in a very surrealist style. | 44 Years: A Couples Journey | Flowers and Nature | The Greenberg Times: May 5 Edition | All Creatures Of The Earth | Manipulations | Land Sea Sky | Fractured Prairie: The Low Mountains Of Southwest Oklahoma | Roaming Okie | Ditat Deus | Some Kicks, Some Pics And Some Route 66 | Journey West: Some 2019 Travels | The Rural Life | American Color (Independance Day) | Mindscapes: Urban Transcendence | Oklahoma City | The City That Knows How | Dreaming Floral | Photography Reflected: An Ambagious Journey | Near To Hearth And Heart: Our Life Together | West Coast Color | Lockdown: The Aftermath | Alphabet: A Fictional Script Using Some Folks | Monochromatic Thailand | Great Gardens | In The Splendid Cities | Structures | Nifty Fifty: Seeing In 50mm | Erin Grá Mo Chroí (Ireland Love of My Heart) | Close | Coffee, Trees And Me: My Seattle Sojourn | Two For The Price Of One | Trees I Have Known | Family | The Crescent City***Garden District***Those Who Are No More | Openings: Portal To The Hidden Life | The Soft Voice Of Small Things | Street Seen | Texas Tulips | Gotham Impressions | Abandoned Oklahoma: Concho Indian School | Western Oklahoma In Winter | Pass A Good Time: A Big Easy Journey | Portraits: A Bag Of Experiments | Some Travels: Journeys With A Family And A Camera | A Type Of Tin | History On Display | Reflections and Motions | The Old Family Album | Southern Louisiana Through The Years | Las Vegas | Joiners Or A Poor Man's Hockney | For The Love Of Film: Lomo-The Sprocket Rocket | Bound: A Visual Slave Narrative | The Streets Of San Francisco | Welcome To The Farm | Automotive Expressions | Celebrating 42 Years With The Love Of My Life | Infrared: A World We Cannot See | Visual Accompaniment To The Notes Played on A Spring Evening, New Orleans | The Crescent City***Tremé***Let The Good Times Roll | Within: A Study Of Spaces | Both Sides Now: My Tribute To Joni Mitchell | THREE | Thailand***Bangkok***Chinatown | Light And Shadow | Old Colorado | Sleepy**Busy**Happy**Sad**NY Life On The Streets | The Crescent City***Vieux Carré | Fashioning Art From Paper. | Details | Foto Fun At Abita Mystery House | The Crescent City *** Among Friends And Monochromes | Celebrating The Land With Colors | The Crescent City***Central City***A Stark Reality | If It Please Thee: A Day At The Faire | The Crazy Colors Of Coney Island | monoNY | Graphis Manhattan | NYC: PERSPECTIVES AND VARIATIONS | New York Grab Bag | Thailand: Wat Rong Khun (The White Temple) | Signs, Symbols and Messages | Colourful Thailand | Strollin'**New Year**New Orleans**New Camera | In The Shadow Of The Cross | Groove | Scribbles, scratches, blotches and spills | Visions Of Seoul: Smart*phone*ography | The Crescent City: Seventh Ward Colorful | The Spirit Of Jazz | My Olde Tyme Irish Dream | Thailand Polaroid | Figments: Floral Revisions | Thailand***The Grand Palace | Seattle | The Crescent City: Marigny Marvels | An Eye For An i : My Hipstamatic Photography | The Crescent City***Chalmette***War Of 1812 | The Crescent City***The Bywater And Beyond | The Crescent City***From The CBD***(COLOURFUL) Business District | The Crescent City***The Historical Tourist | The Crescent City***Laissez Les Bon Temps Rouler | ROCKY LAKE | APPstract Expressionism | tra·verse (trə vʉrs′, trav′ərs)intransitive verb: to move across; cross over | Whispers Of The Winterwood | Subway | Visions Of Seoul: Window Shopping | Visions Of Seoul: The Palace | Visions Of Seoul: The Umbrellas | Visions Of Seoul: Twelve Wonderful Faces | Spheres, Objects and Designs | Two Wheeled Dreams | Scott Kelby's WOrldWide PhOtOWalk | Forever Young: Tribute To A Song With A Few Photographs | The Unconsidered World | Person A Day rather than Photo A Day | Thank You Edwin H Land | Alcatraz | The APP Of My Eye: Nothing to PHONE home about! | wide | Versions Various | Campus Curiosities: An Alchemy of Tones and Dynamic Range | Closed For The Season | Creed's Gallery | Departed | Soccer Love: Seattle Sounders, The Fans | New York Nights | Autumn Color | Oklahoma City: The Memorial | The Rural Life: Elevators and Silos | Chasing the Storm | A Windy Day In My Hometown | At The Farm (like Holga) | Sunday Afternoon Walk | Union Station, Kansas City | I Tilted, I Shifted. Now What??? | Xmas 2008: I Was The Victim Of Drive By Shopping Then Saved By My Faithful Camera | Trash Or Treasure | Snapshots At University: My Little Girl Graduates | Challenge | One Day: November 10 2007 | Danica | Color | Europe: My First Visit | In Box 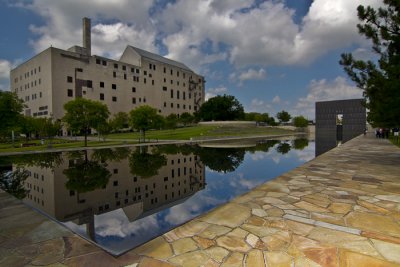 On April 19, 1995 two evil men destroyed the Alfred P. Murrah federal building in downtown Oklahoma City with a truck bomb. In so doing they took the lives of 168 innocent people including nineteen children. The victims ranged in age from three months to seventy three years.
The Journal Record building, which houses the Oklahoma City National Memorial Museum is reflected in the pool. This building also contains the Institute For The Prevention Of Terrorism. 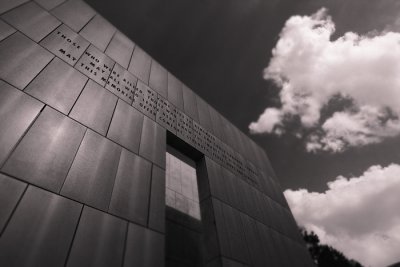 The bombing occurred at 9:02 AM. This moment of destruction is framed by two stone entrances or gates. This is the eastern gate or 9:01 gate. 9:01 AM being the last moment of innocence before the attack.

There are 168 chairs here representing the lives taken on April 19, 1995. They stand in nine rows to represent each floor of the building, and each chair bears the name of someone killed on that floor. Nineteen smaller chairs stand for the children. The field is located on the footprint of the Murrah Building. 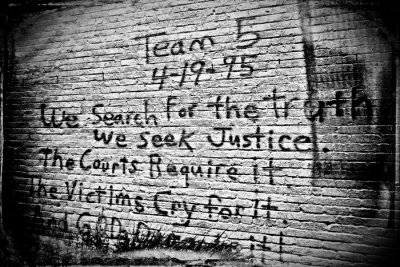 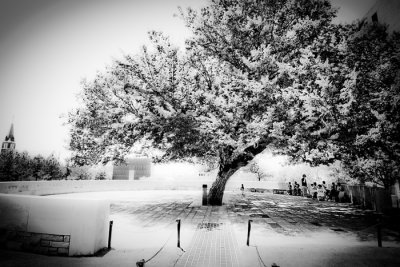 An American elm on the north side of the Memorial, this tree was the only shade tree in the parking lot across the street from the Murrah Building, and commuters came in to work early to get one of the shady parking spots provided by its branches. Photos of Oklahoma City taken around the time of statehood (1907) show this tree, meaning it is currently at least 102 years old. Despite its age, the tree was neglected and taken for granted prior to the blast. Heavily damaged by the bomb, the Tree ultimately survived after nearly being chopped down during the initial investigation, in order to recover evidence hanging in its branches and embedded in its bark.
The force of the blast ripped most of the branches from the Survivor Tree, glass and debris were embedded in its trunk and fire from the cars parked beneath it blackened what was left of the tree. Most thought the tree could not survive. However, almost a year after the bombing, family members, survivors and rescue workers gathered for a memorial ceremony under the tree noticed it was beginning to bloom again.
Hundreds of seeds from the Survivor Tree are planted annually and the resulting saplings are distributed each year on the anniversary of the bombing. Thousands of Survivor Trees are growing today in public and private places all over the United States; saplings were sent to Columbine High School after the massacre there, to New York City mayor Rudolph Giuliani after the September 11, 2001 attacks, the Virginia Tech massacre in 2007, and various other times. 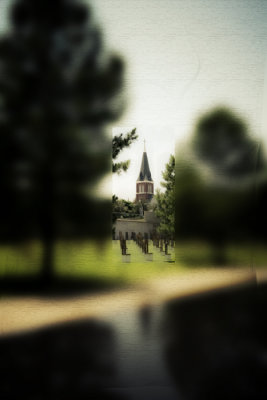 .....A window of hope through a time of great sorrow. 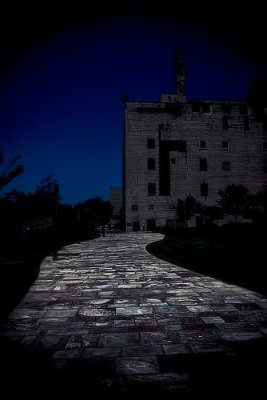 I avoided visiting this memorial for several years after it opened. I was not prepared for the experience and I dreaded the dark place I feared it would take me to. After my visit I came away with a totally different experience. One of sadness yet hope. One of admiration for the spirit of man overcoming the evil of some. This image personifies my dark feeling before entering the museum. 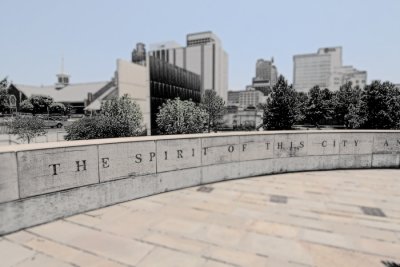 A brighter vision and clearer view because of this message. The entire message reads "The spirit of this city and this nation will not be defeated; our deeply rooted faith sustains us." This wall surrounds the survivor tree.
click on thumbnails for full image